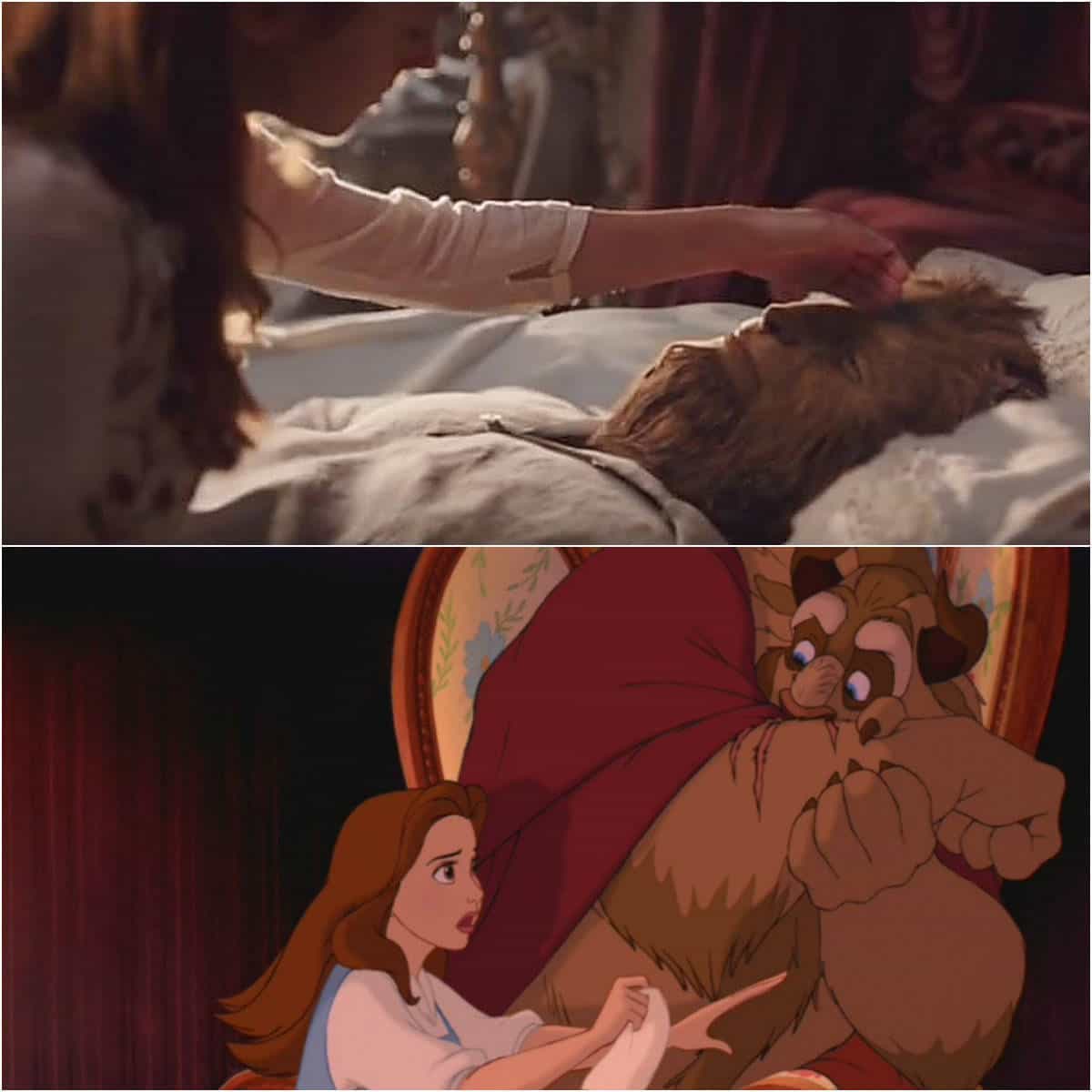 Breaking Down The Final “Beauty And The Beast” Trailer

When the first “Beauty And The Beast” trailer was released, we compared the original animated movie to the scenes shown in the live action trailer, and for the most part they were spot on. With the final trailer of the film being released this week, and with a lot of new scenes added to this trailer, we decided to give it another shot to see how it measures up to Disney’s original animated classic. So here we go! 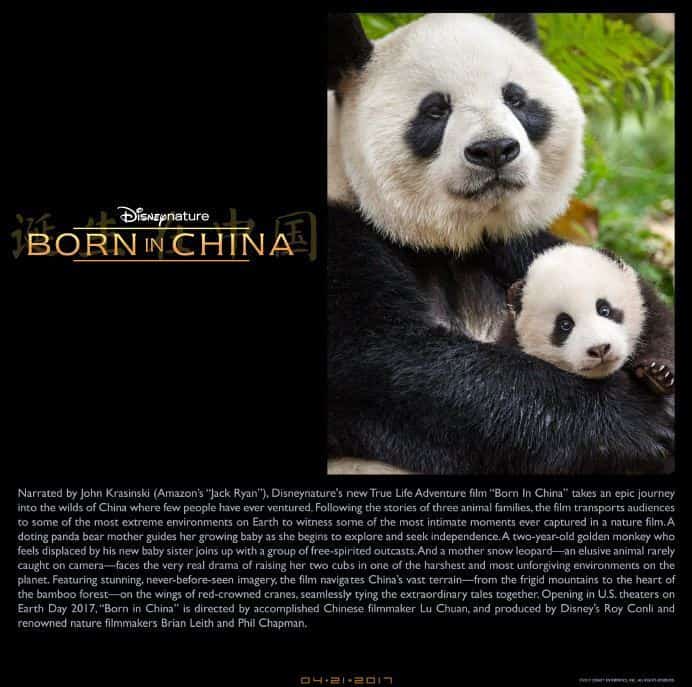 I’m not to sure about this one. Either Belle and her father have a really nice house in the new movie or they no longer live in a house that is secluded from the rest of the village. This could even be the book shop but I am leaning more that this is where Belle lives.

Belle, with a dreamy far off look. And her nose stuck in a book.

Here in town there is only she. Who’s as beautiful as me. Gaston really loves himself some Gaston. 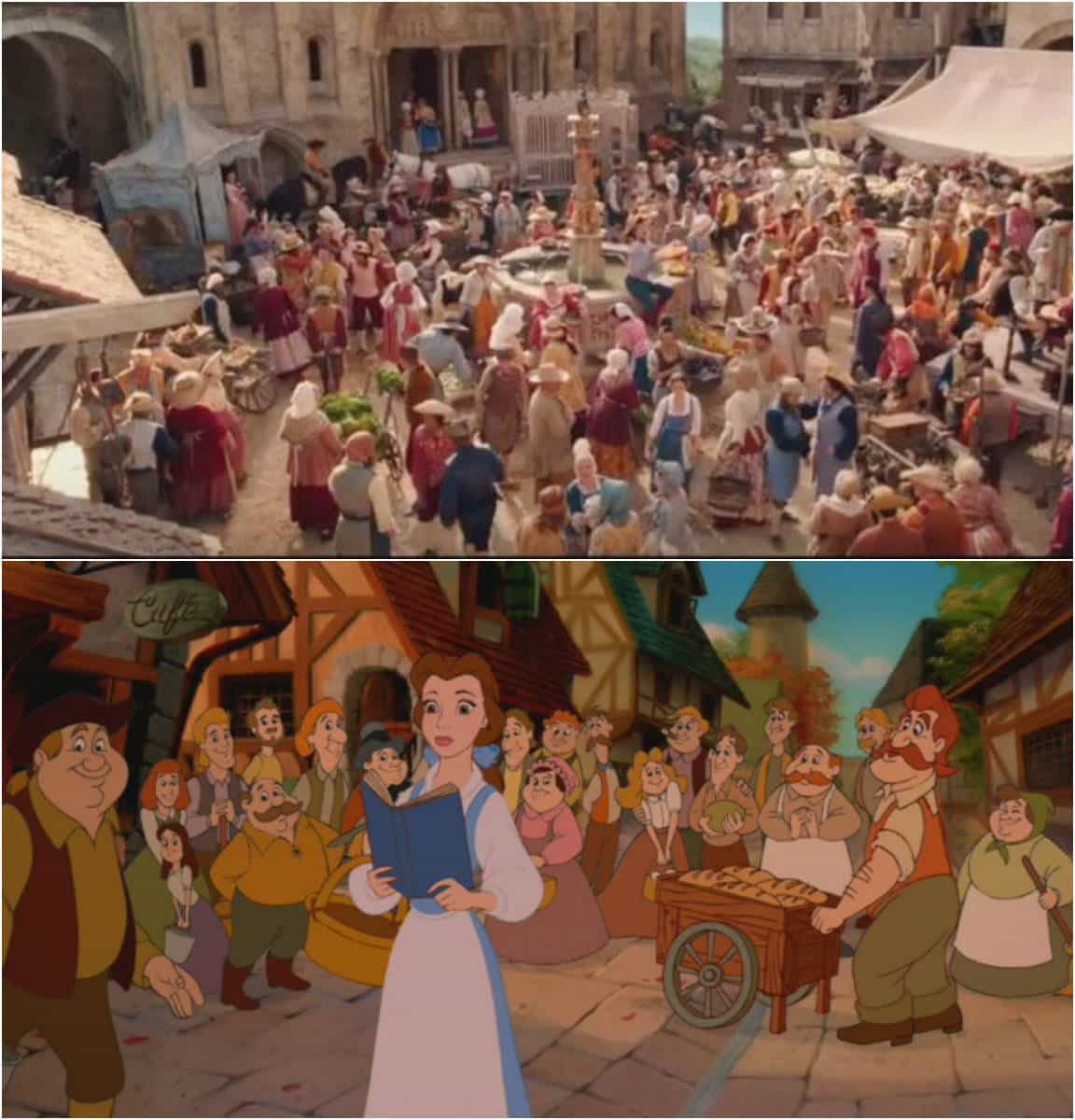 There is definitely a lot more people in the live version’s town. You can also see the fountain where that sheep ruined Belle’s book!

I’m guessing that this is the first time we see Gaston putting the moves on Belle since they are still in the village. Belle ain’t having it though in both versions. 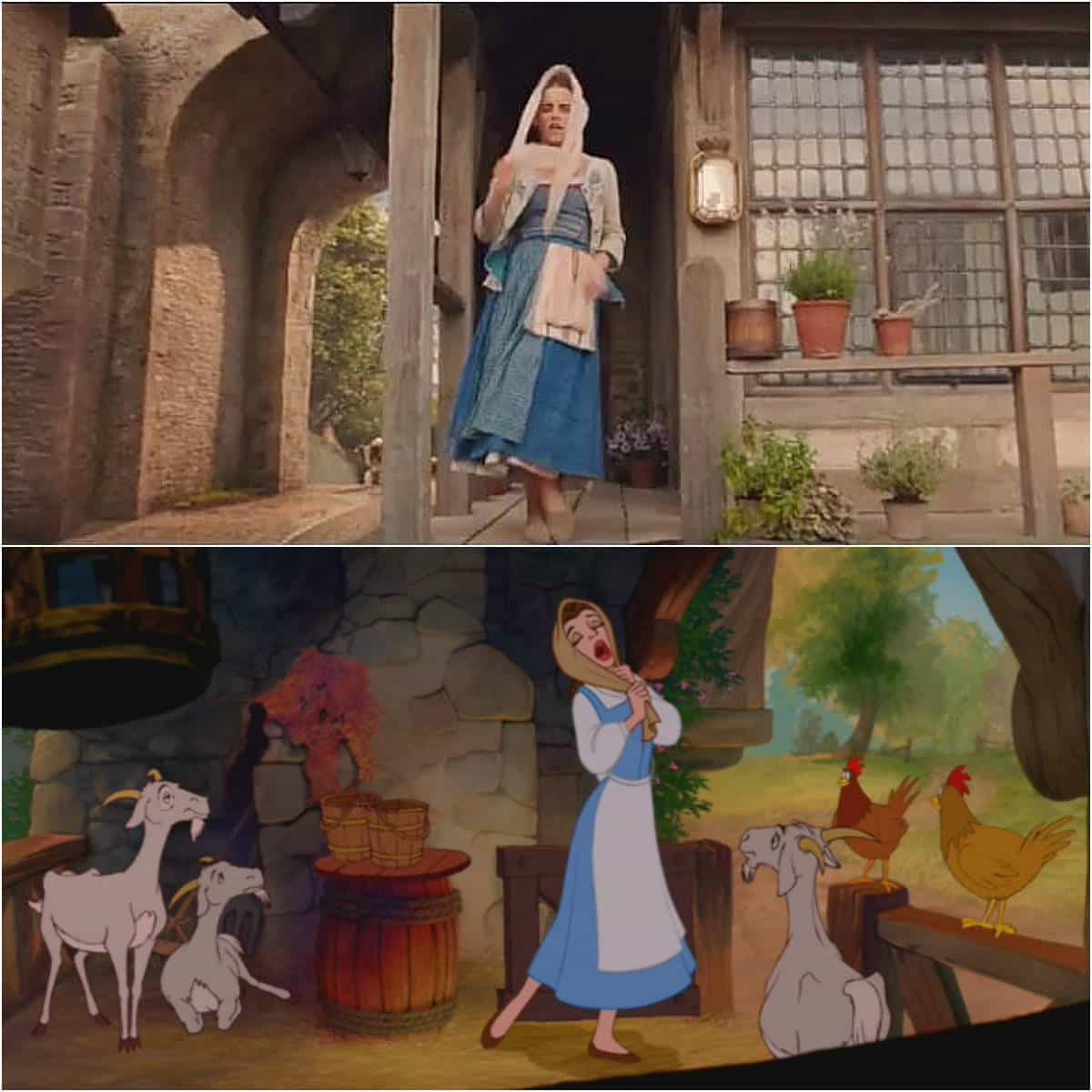 Here Belle is mocking the idea of becoming Gaston’s wife. But if you look, she is coming out of the same house as the first photo but from the left side. Again, I cant imagine that Belle and Maurice would live in such a huge house so they may live in the town now and the farm element may be gone in this movie. Call me out if I’m wrong when it comes out. 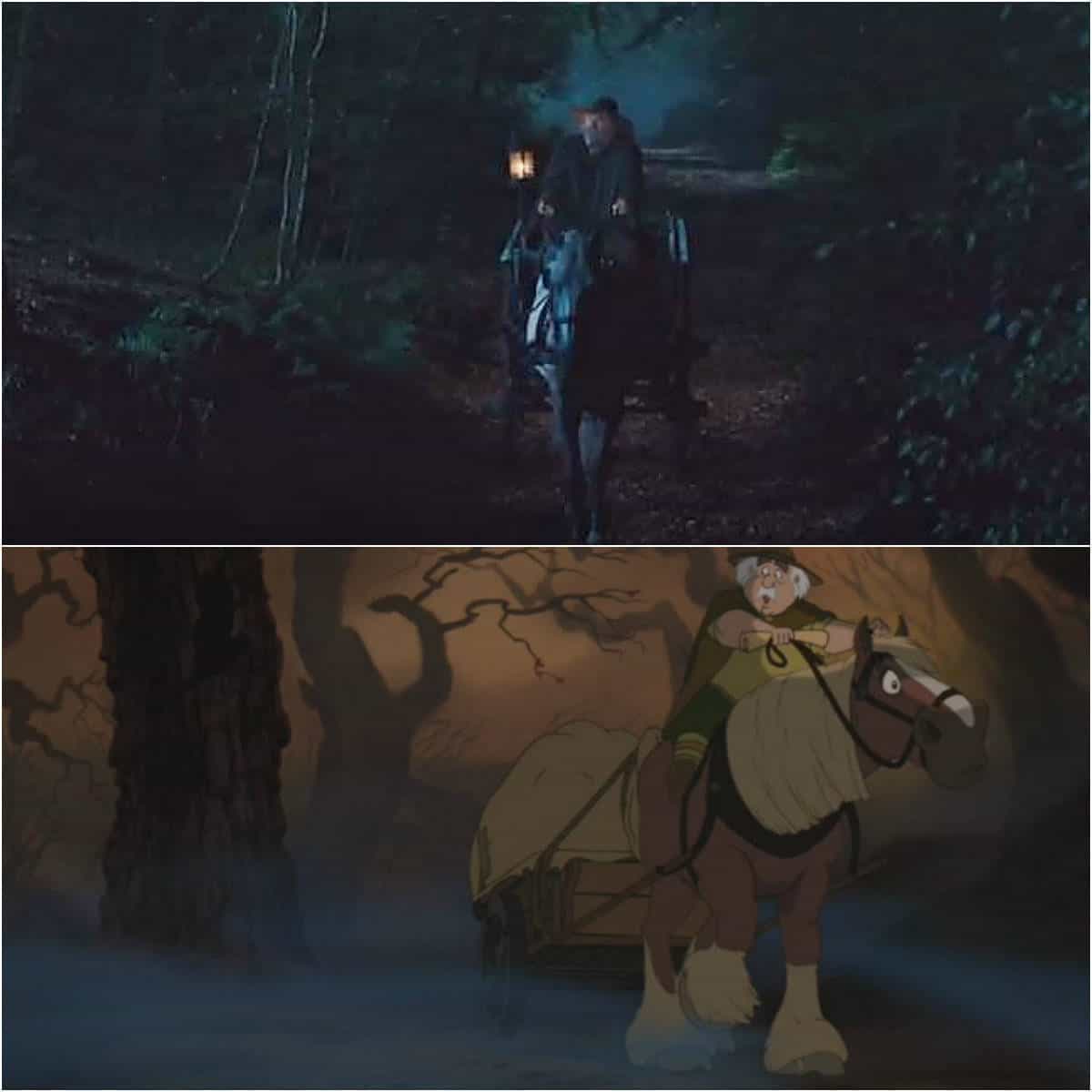 Maurice and Philippe are heading to the fair to show his latest invention. Actually looks a less scarier in the new movie. 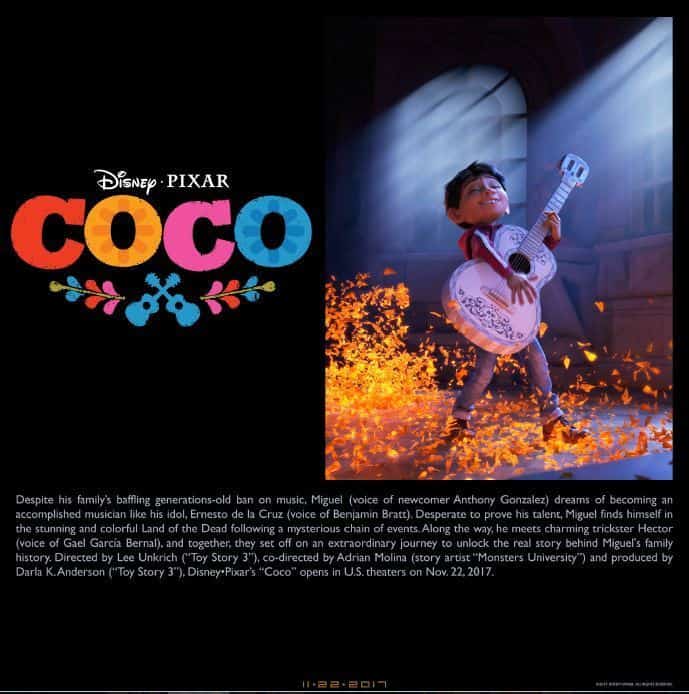 Belle goes in search of her father. Phillipe is now white instead of brown. Also it appeared to be Fall in the original movie but in this scene it is clearly Winter.

Belle and Maurice share a last moment together as Belle promises to take her father’s place as the Beast’s prisoner. The Beast in the new trailer mentions that Maurice is a thief. A thief? That’s new. What did he steal?

You’ve got to wonder if Gaston will be juggling eggs in the new movie. Also that coat looks different from the one he has for most of the scenes we have seen him in, in the trailer. This is probably the coat he wore when asking Belle to marry him and she said no. Then he went to the bar.

This is our first look at The Wardrobe in the new film. Drastically different in which her face now resides in the inside of her cabinet drawers. I could ne wrong, but if it is, looks kind of creepy. 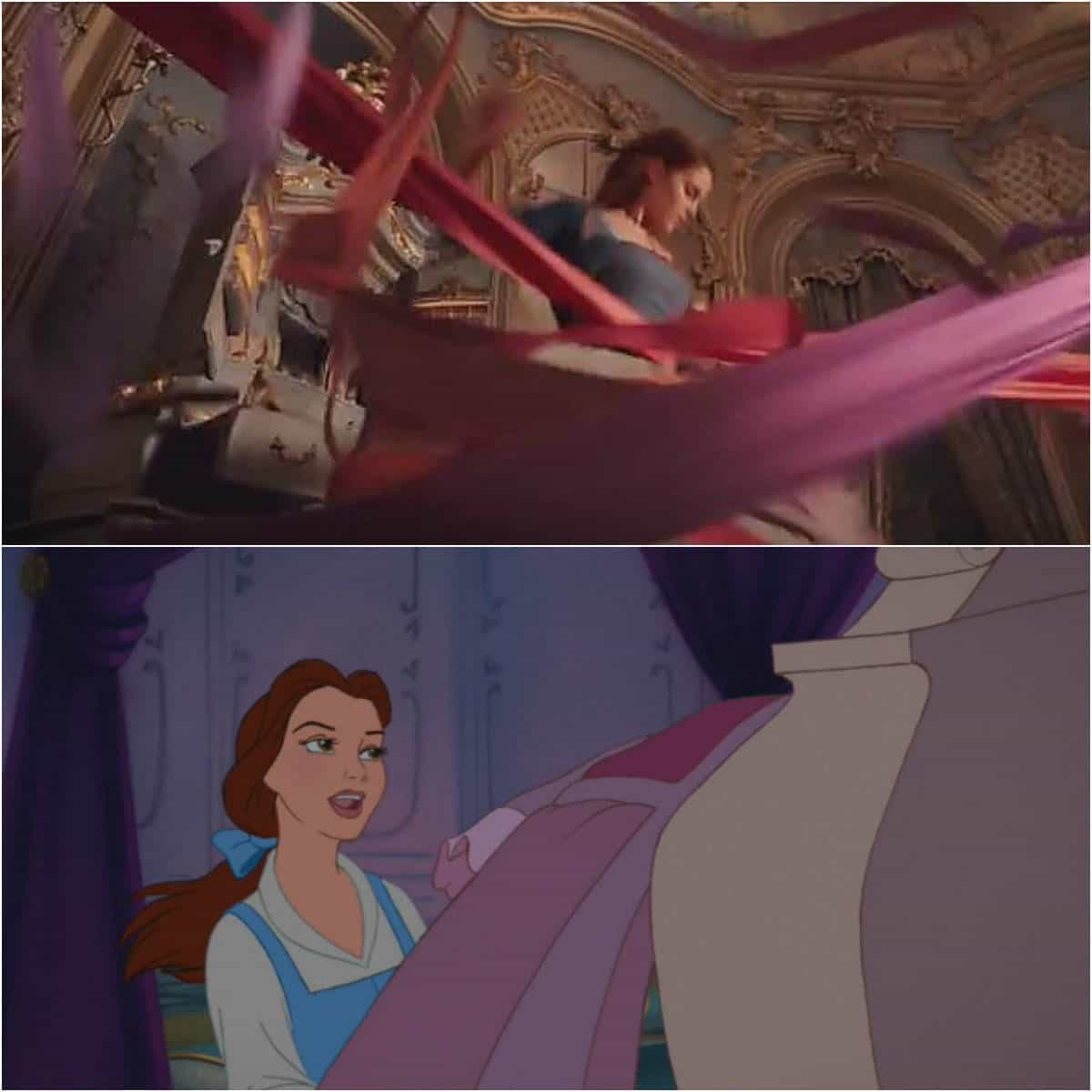 In the original, The Wardrobe passes a dress to Belle to wear at dinner, which at the time she refuses to wear. Here in the new version, it appears that The Wardrobe, or some unseen characters, wrap fabric around Belle to make her dress. 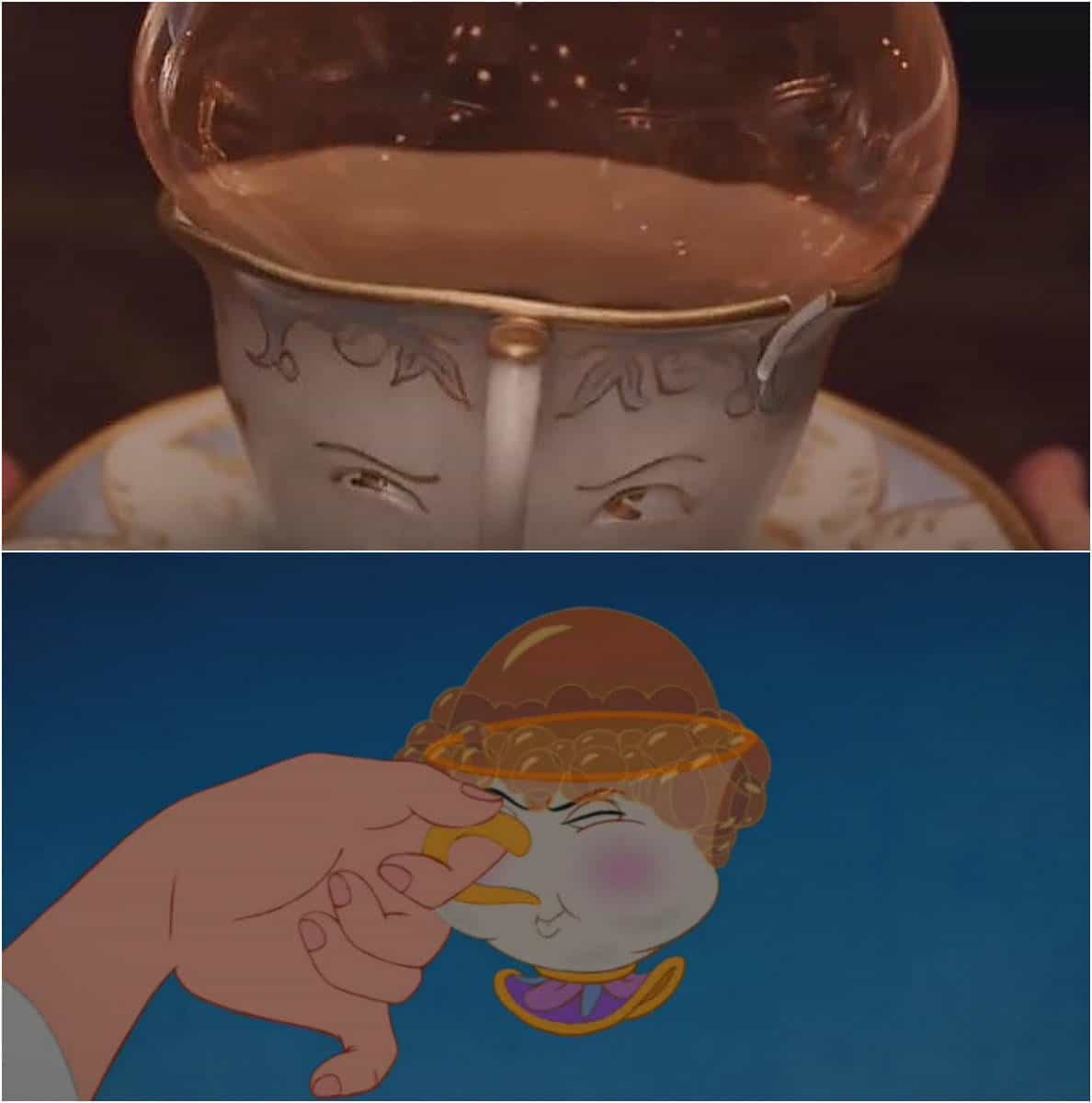 Chip doing his trick and blowing bubbles. I wouldn’t drink that tea. 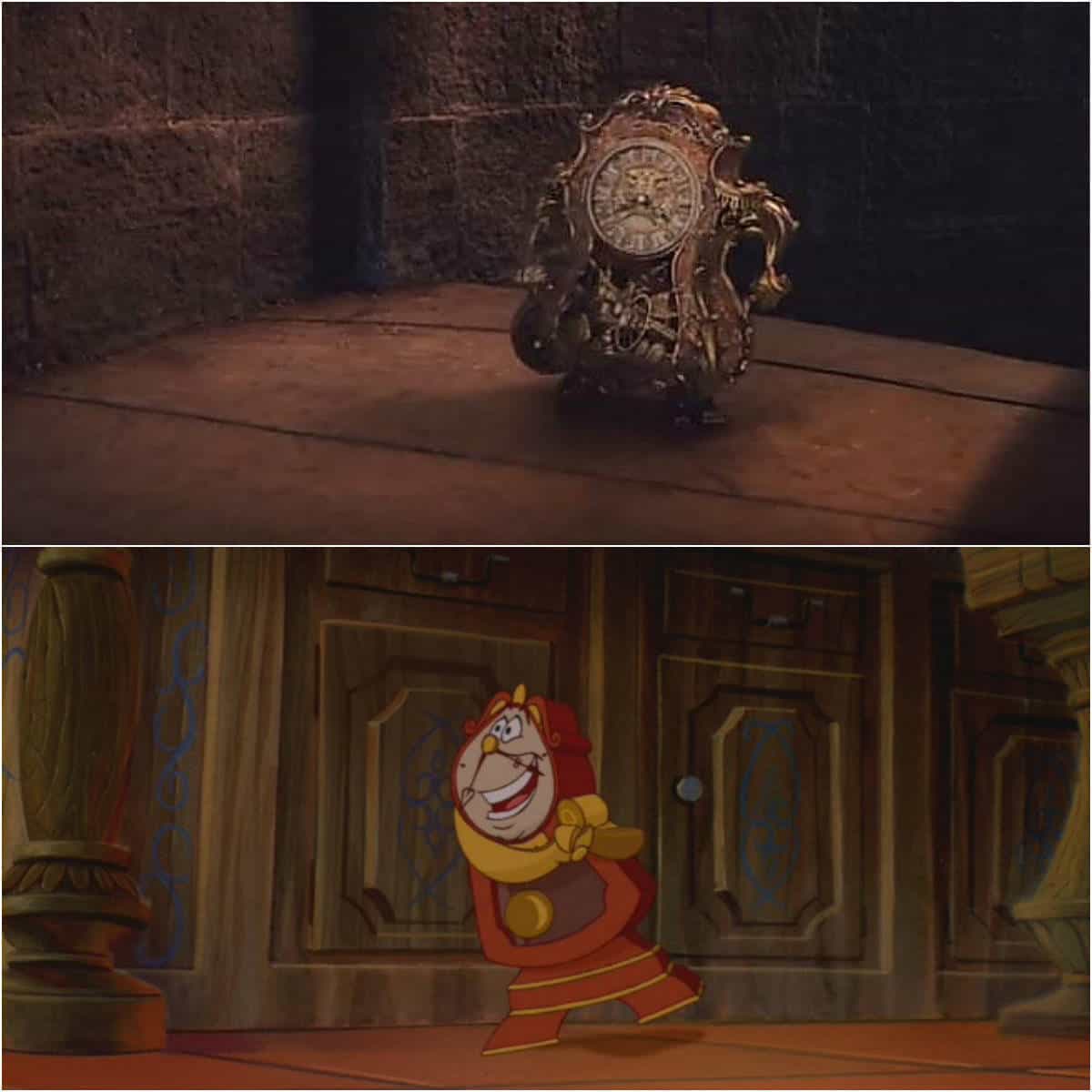 Not necessarily the same scene but think the new Cogsworth looks pretty cool. Great casting of using Ian McKellen as his voice.

A completely different first meeting between Belle and Lumiere.  In the original, Belle is introduced to Lumiere in the kitchen, where she gets a does of his French charm. In the new film, Belle is terrified by the talking candelabra and is about to beat him with a stool. Don’t blame her. 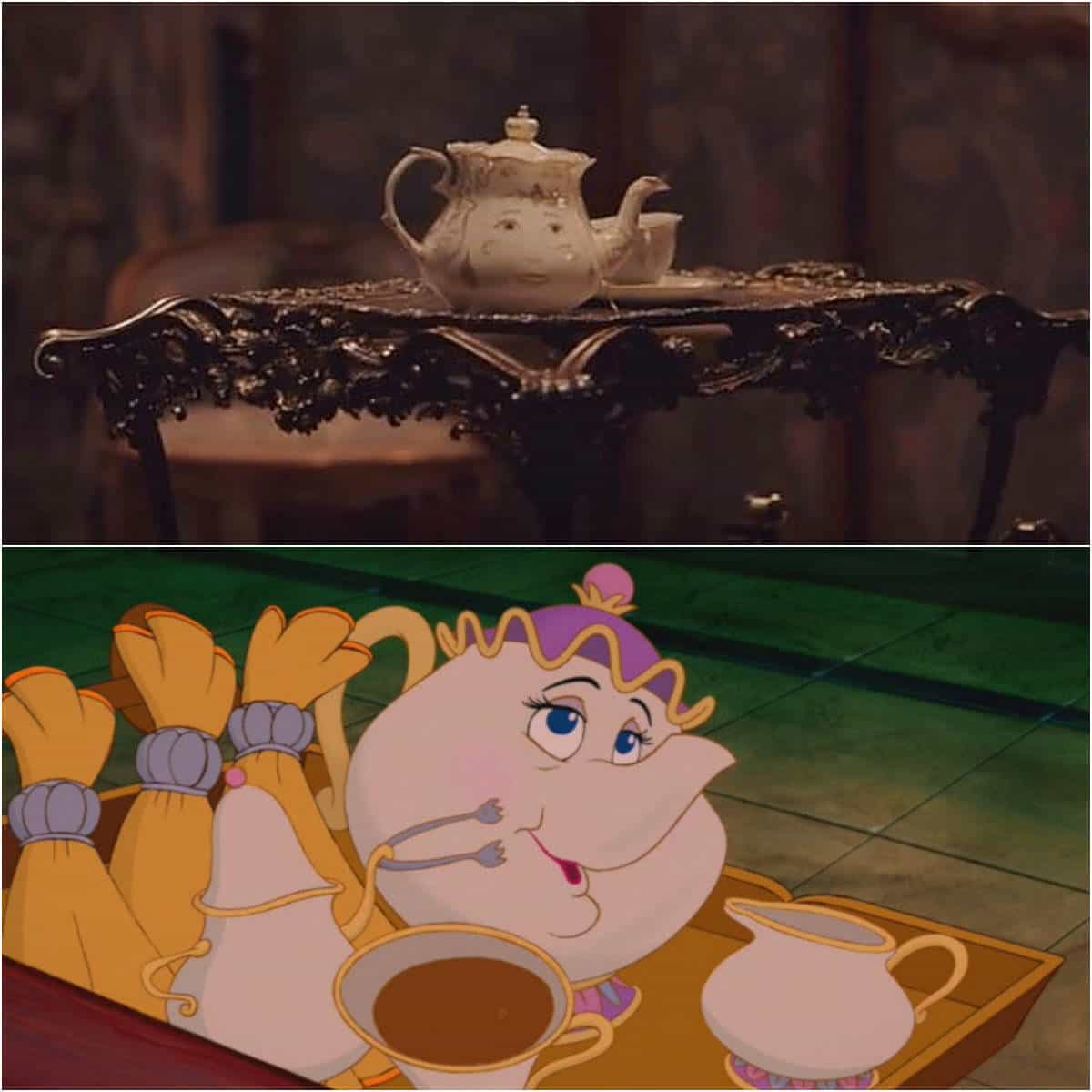 Mrs. Potts asking Belle how many lumps she wants. Pretty close matchup including traveling tray/cart. May not be from the “Be Our Guest” scene though.

Lumiere bringing it home during the “Be Our Guest” finale. Looks like some real fireworks are in the new movie. 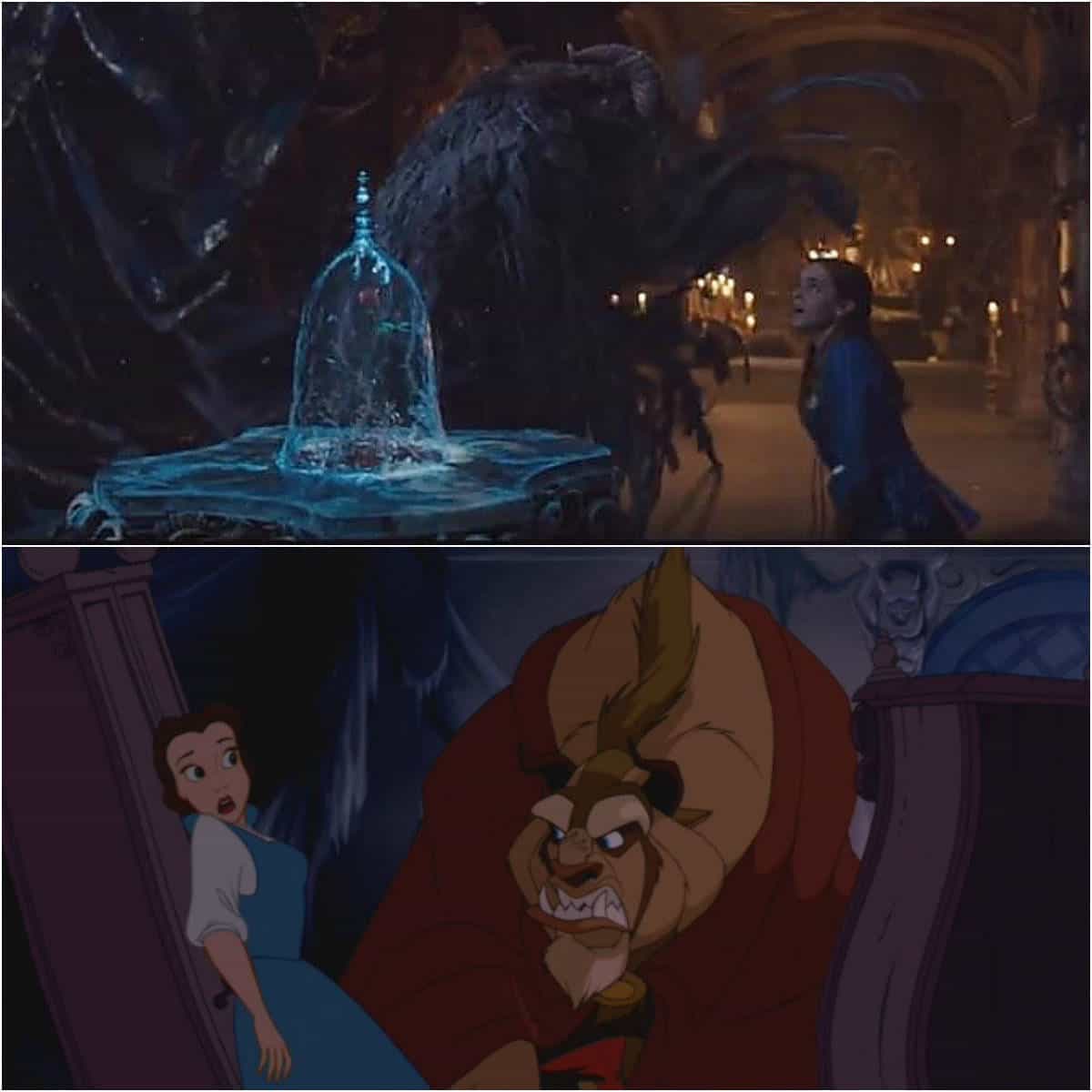 Beast catches Belle in The West Wing, which is forbidden! The Beast in the original movie seems angrier to me, but we haven’t seen much of this whole scene play out. 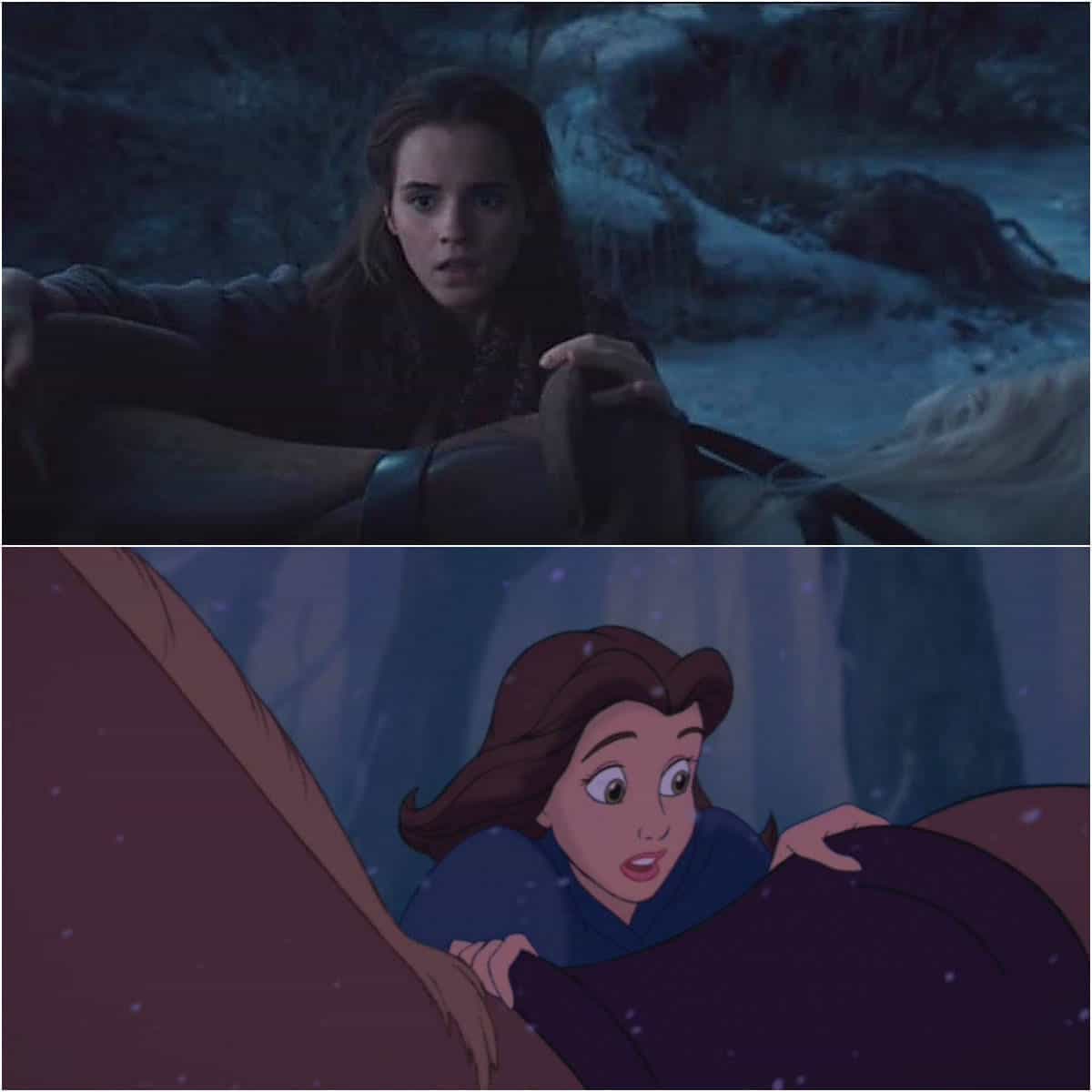 A very spot on scene in which the new version is exactly like the original. Belle has second thoughts of leaving Beast after seeing that he is severely injured from saving her life. 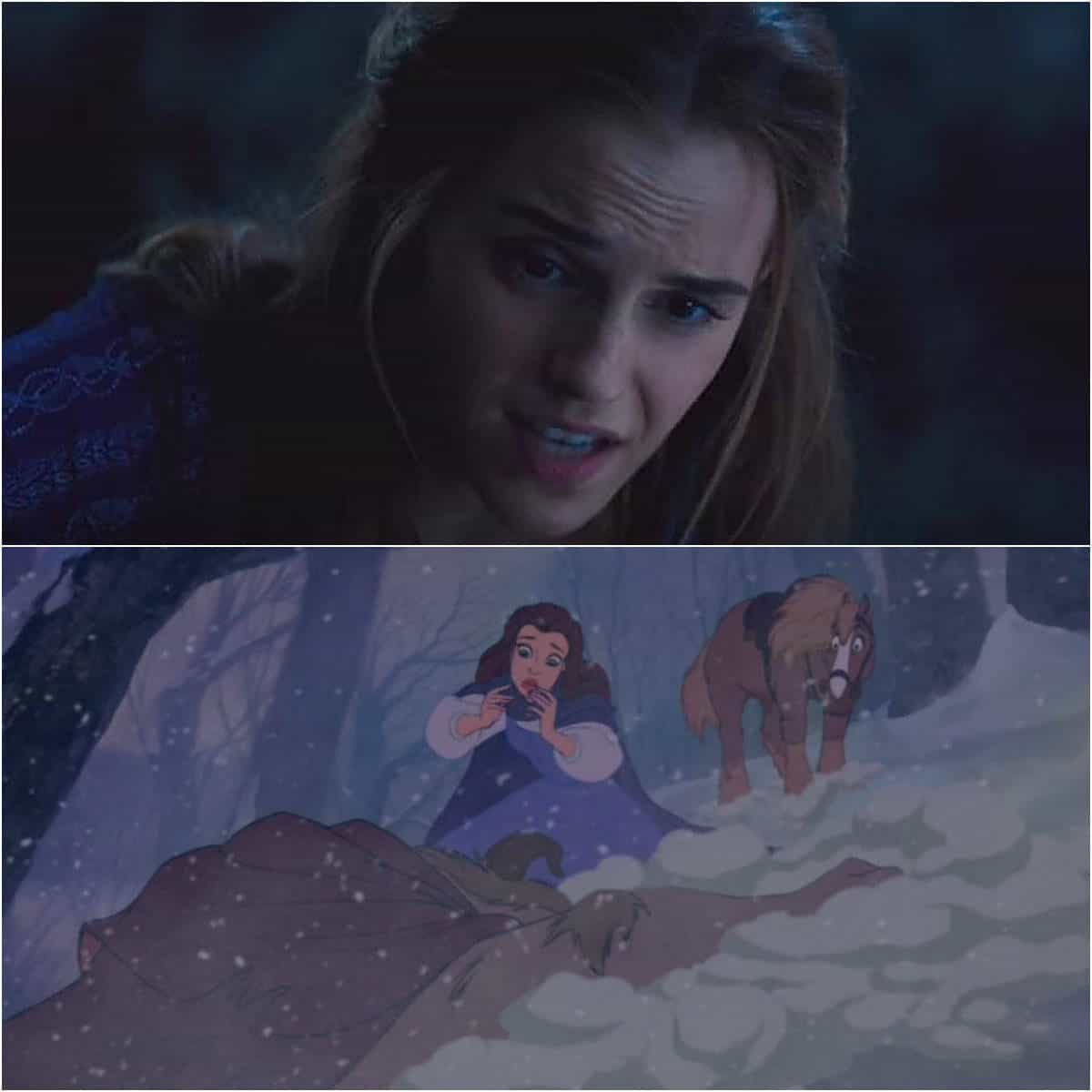 This one is the same but different. Belle tells Beast, “You have to help me. You have to stand.” I’m glad that they put that in there. Very dramatic and it makes sense that with The Beast being a couple of hundred pounds, it wouldn’t be easy for Belle to lift him on to Phillipe.

In the original, Belle is tending to Beast’s wounds while he sits in his chair. In the new film, it looks like Beast took more of a beating from the wolves. I think the original shows his stubbornness, in which he doesn’t really want Belle to help him at first, and he is sitting in a chair as though what happened is no big deal. In the new version, it kind of shows his humanity a bit that he is so battered down that he is put up in bed. 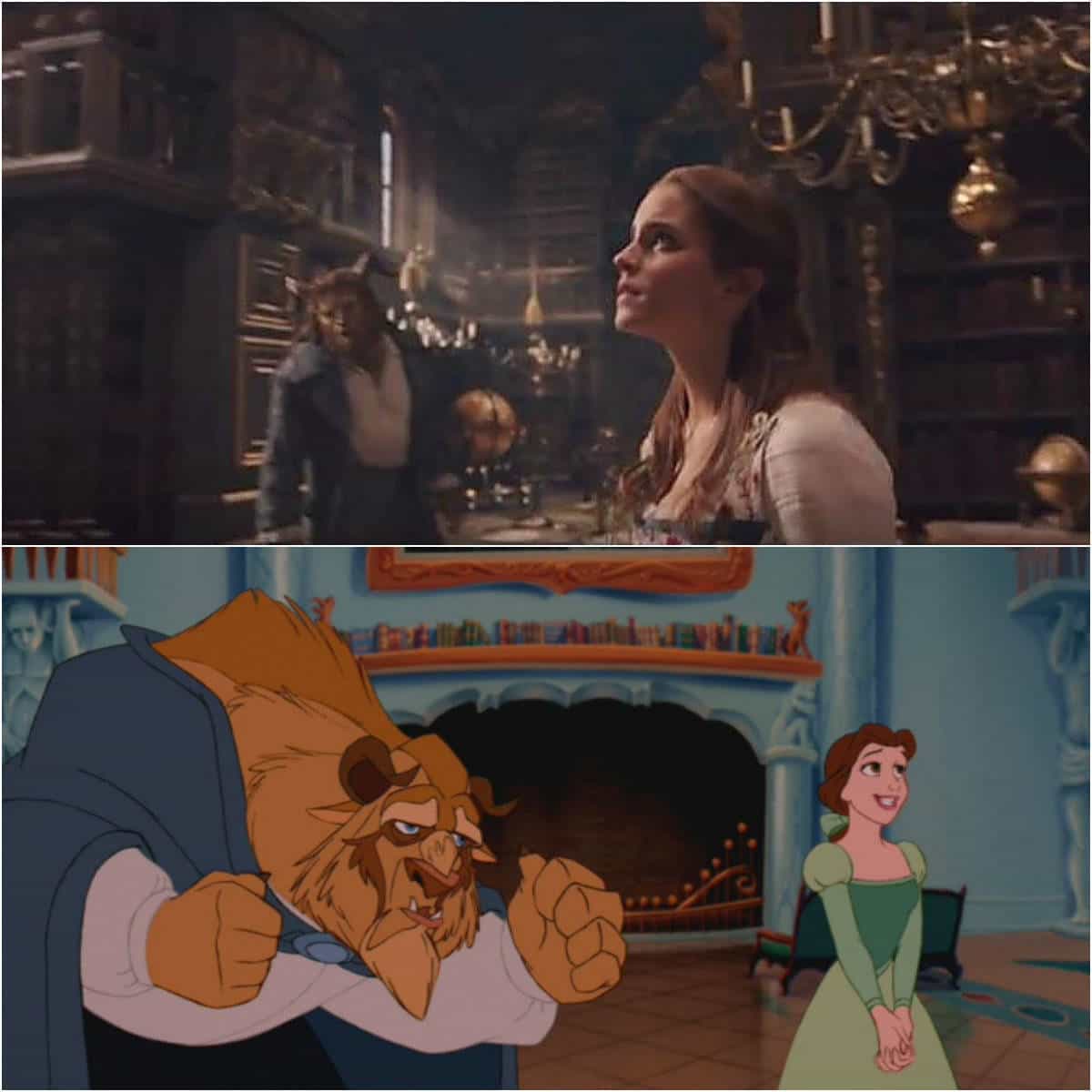 These two scenes are very similar in which Beast gives Belle the library. One thing that stands out is instead of a cape, he now has a cool looking jacket. I finally noticed that his horns point inward in the new movie and outward in the original. The new Beast is a very cool design.

Another good addition. Belle asks Beast, “Have you really read all of these books”? Beast replies by saying, “No. Some of them are in Greek”. A funny moment, but it also reveals that Beast is well read and shows that he has something in common with Belle. 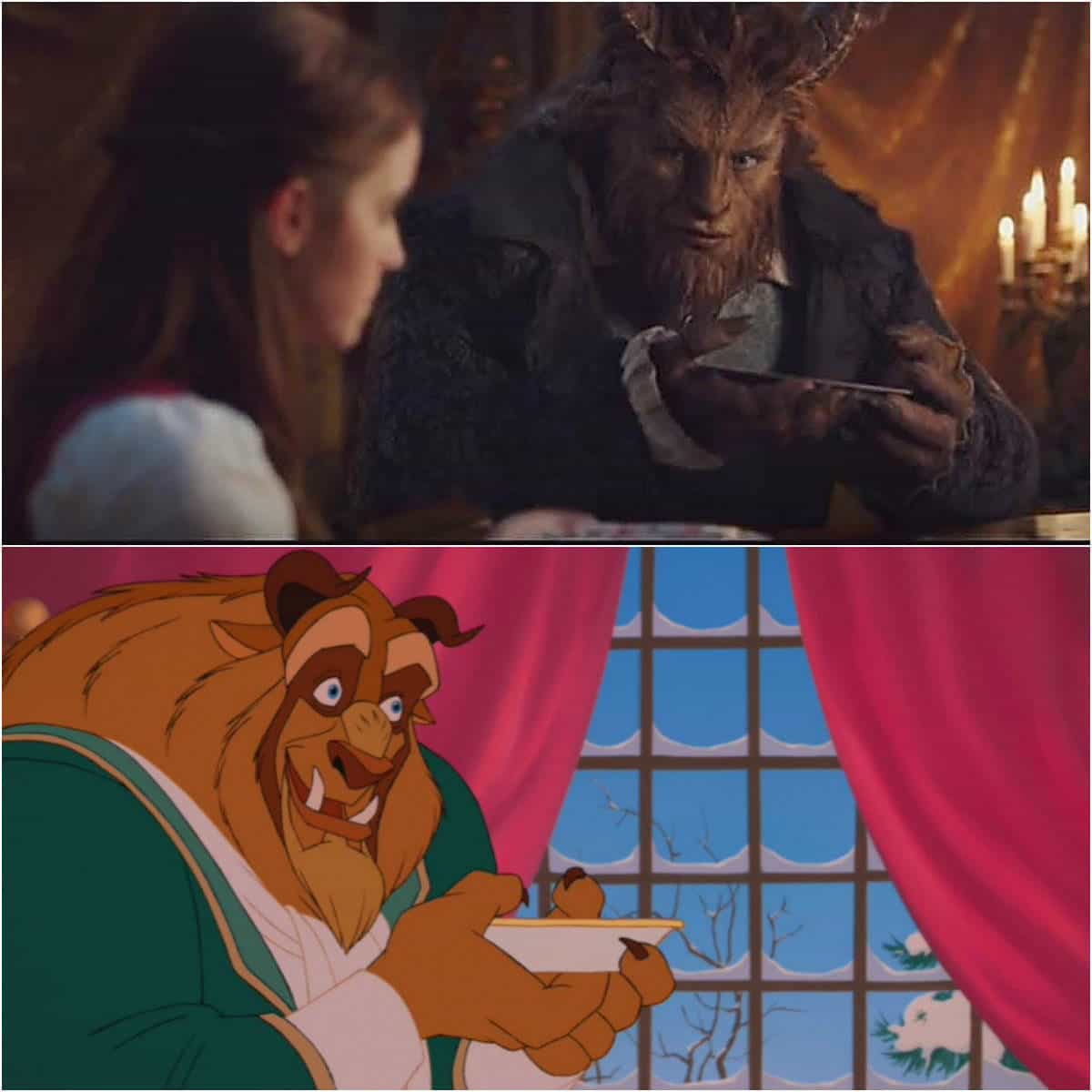 Beast here having trouble with his table manners and Belle letting him feel less uncomfortable by suggesting an alternate way of dining. With all of those servants, you would think someone could trim his nails. 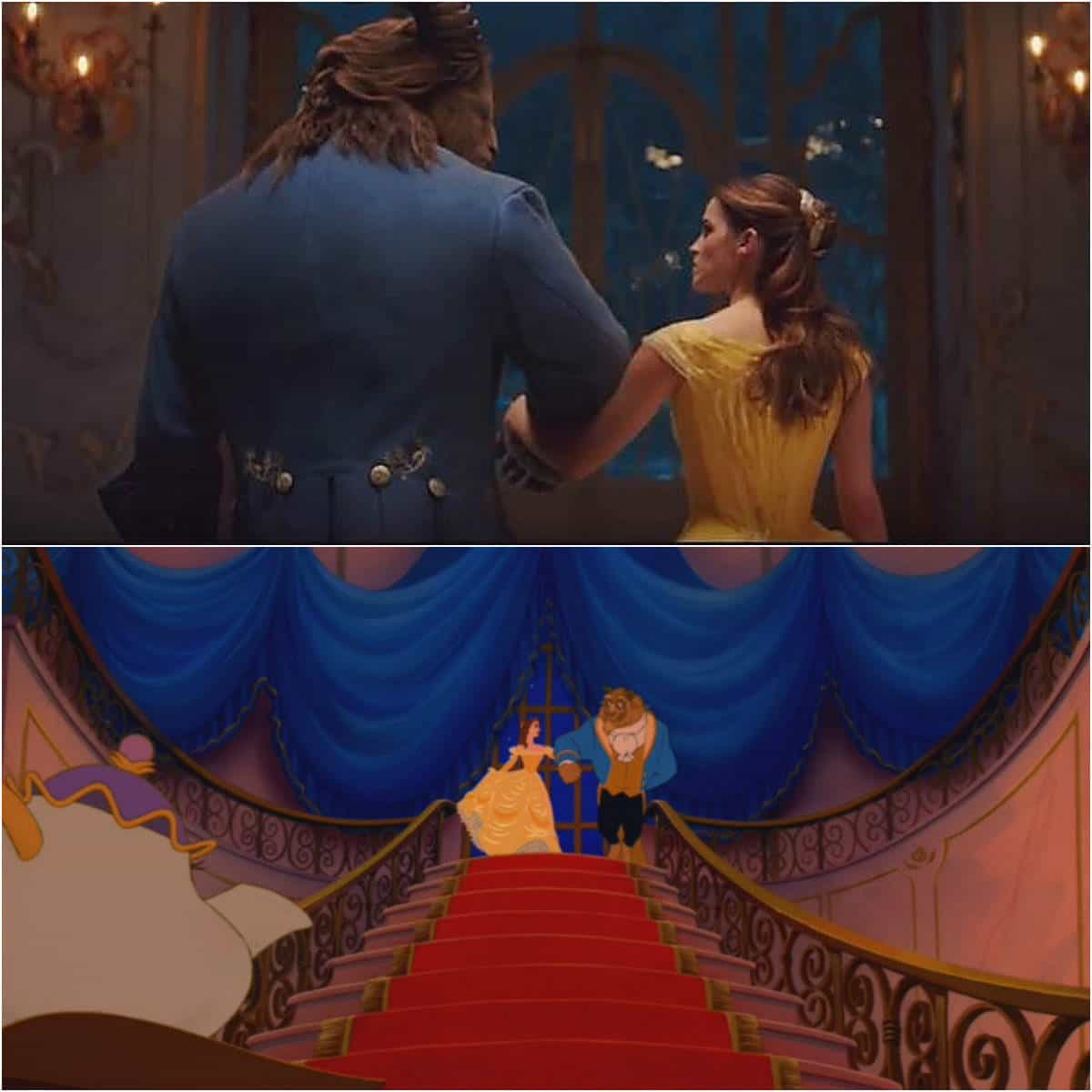 Very nice homage to the original where Belle offers Beast her arm to escort her. This could be the scene in which they go in the garden after diner and dancing as they seem to be walking towards a door that leads outside.

Belle and Beast bow and genuflect to each other. A bit of a switch with this occurring now just as they are about to dance.

Belle and Beast dancing in the ballroom. Everything we have seen from the ballroom so far looks amazing. Look at the design on the tiled floor and the candles reflecting on them in the new version. Really cant wait to see this. 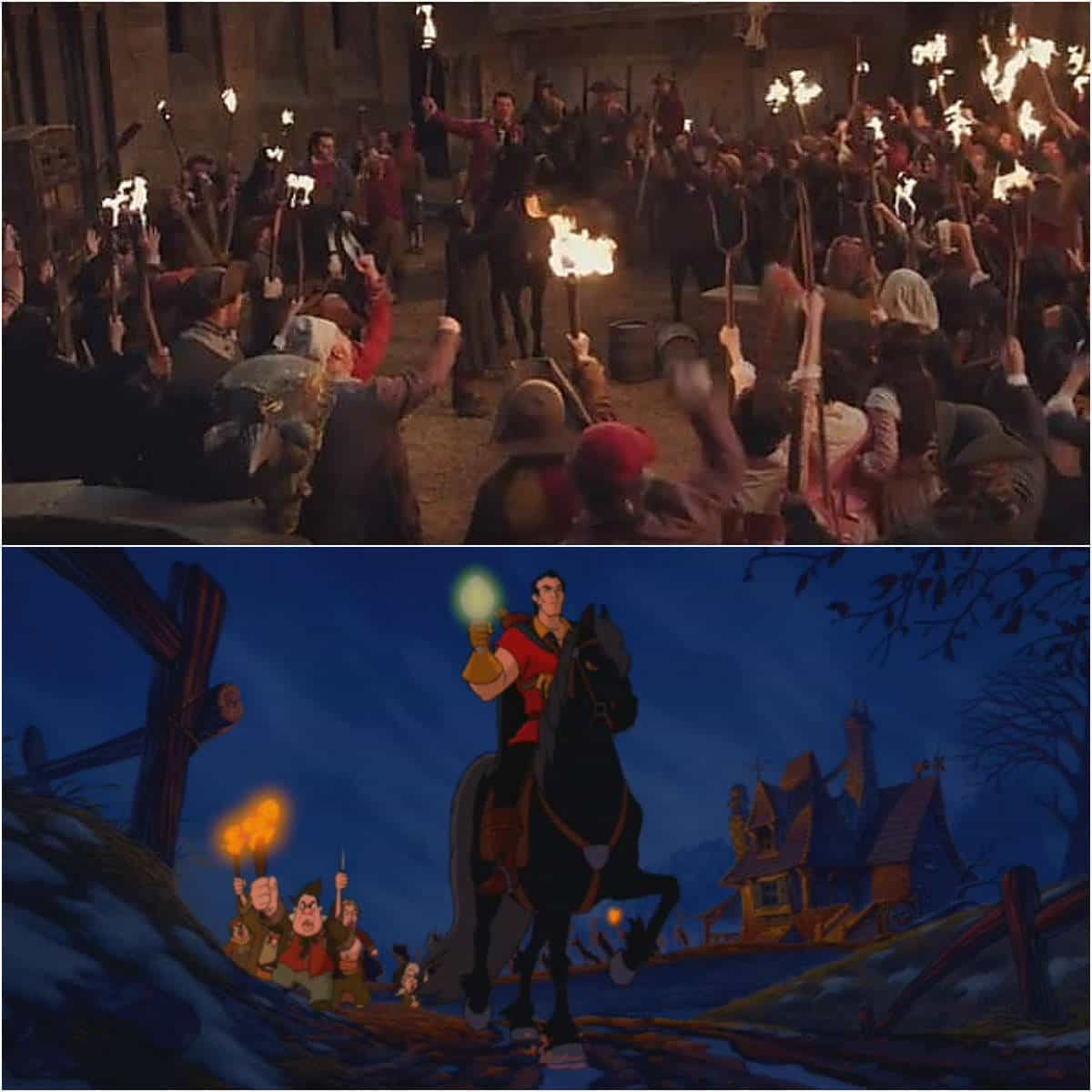 Gaston looking for trouble and leading the town folk to raid the castle and “kill The Beast”. Gaston seems to be holding a torch now instead of the magic mirror. 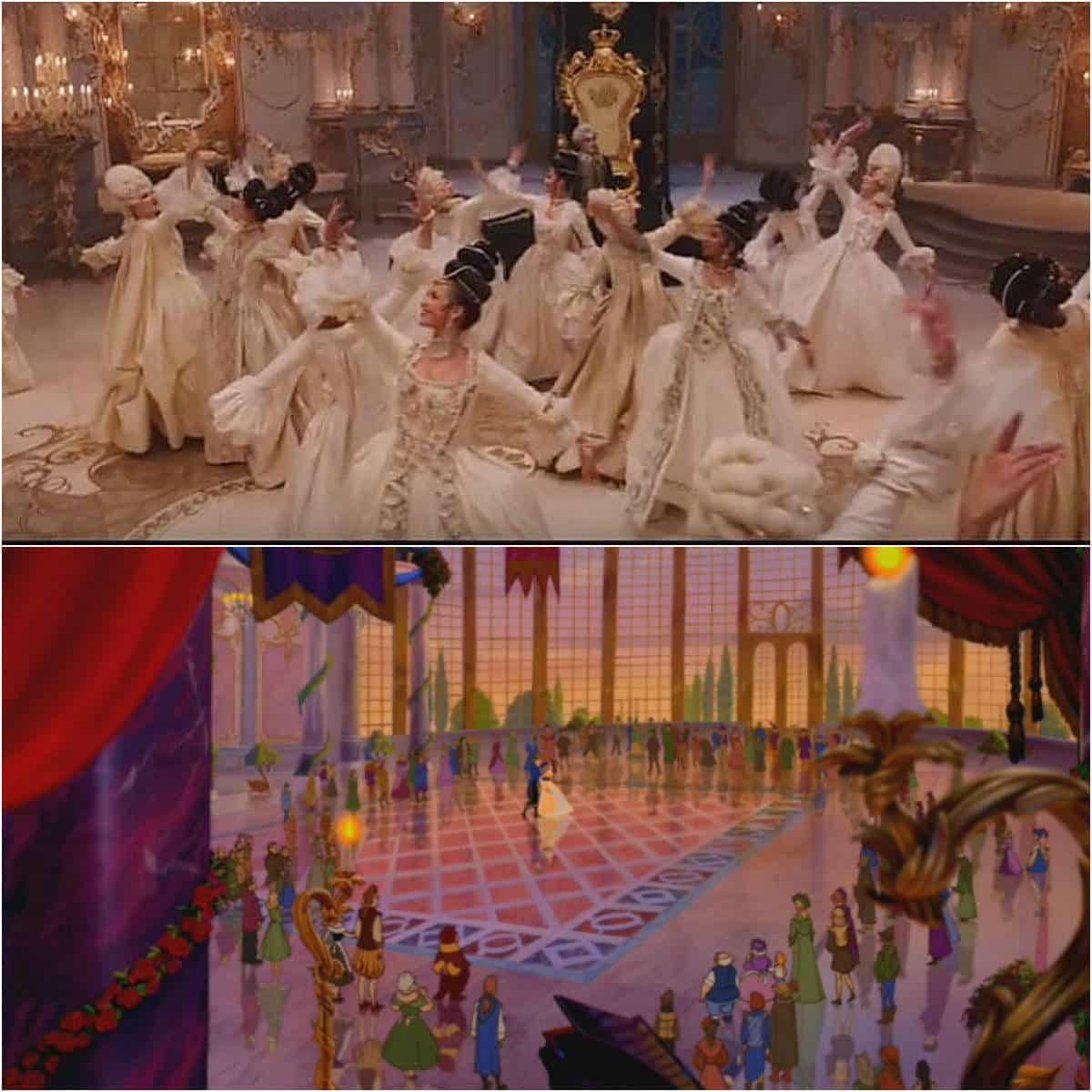 I’m not sure about this one but think I know what it could be. It could be the end scene where all of the magical objects return to their human form after The Beast’s spell is broke. But more than likely, this is the “Human Again” scene that was added to the Special Edition version of the original animated version. In the Special Edition version, the magical objects are cleaning up the castle and singing about being human again. But in the new movie they could be imagining what it was like being human back in the day. The ballroom looks the same as when Belle and Beast were dancing, so I wonder if we will see a visual change to the castle after the spell is broken. Maybe not.

This scene almost fooled me. I think. Belle asks “someone”, “what happens when the last petal falls”? Lumiere answers, “the Master remains a Beast forever” and Cogsworth answers, “And we become antiques”. I think this could just be clever editing and that Lumiere, Cogsworth and Mrs. Potts are talking to each other, as was done in the original film. No one ever told Belle about the significance of the Rose petals falling in the original. If so, it might have made things easier. So I’m not sure if they will reveal this to Belle in this movie. And how Cogsworth answers, and that Lumiere, is next to him, makes it obvious that it is a different scene from when Belle and Lumiere are overlooking the exterior of the castle. We’ll see.

This one is driving me crazy. Cant figure out with this one is. It appears to be Belle’s hand on what looks like could be a map of The Earth. It has some kind of magical element to it since it sparkles when she touches it. Could this be a globe? I thought at first that this was shown as the interior of The Wardrobe, since it has a similar color and design that you do see inside The Wardrobe. But after examining it more, it’s close, but no cigar. So what is this thing? Is this a major addition to the story? We’ll have to wait and see with this one.

Anyway, that’s all we could find. Let us know if we missed anything and if you agree or disagree with our analysis. Really looking forward to finally seeing this once it opens on March 17th!