Hostess with the Mostess – Top 5 Pirates of the Caribbean Results

On March 18th, we had a very special anniversary: Pirates of the Caribbean turned 50! To pay homage to this beloved ride, my top 5 favorite list honored all of those fun-loving pirates. If you missed it you can read it right here.

Now let’s see how you voted! 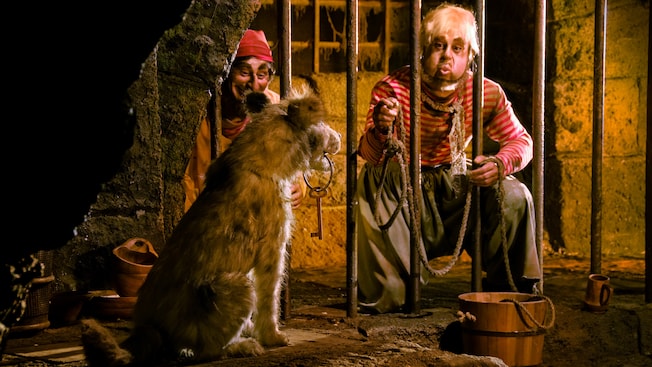 Wilbur hit the number five spot on your list too! As cool as he may be, he is apparently not a fan favorite earning very few votes. Did you know that he is based off of a janitor that used to work at what is now called Walt Disney Imagineering? 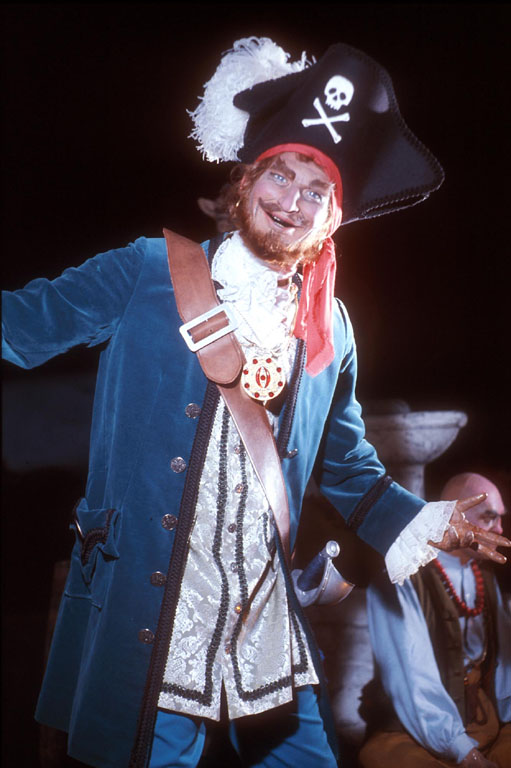 This one really surprised me! I thought the Auctioneer would get a lot more votes. Great job to Gregory and Mike for getting the correct answer about the Auctioneer’s voice. Paul Frees who voiced the Auctioneer also provided his voice for The Ghost Host in the Haunted Mansion and Adventures Thru Inner Space. One of my favorite parts about this scene is just a small detail that usually gets lost in the auction action. One of the pirates shoots his gun hitting a sign. And what I love is that we actually hear the bullet hit the sign and it moves. It’s all in the details!

3. Pirate Hanging With The Pigs (Petey) 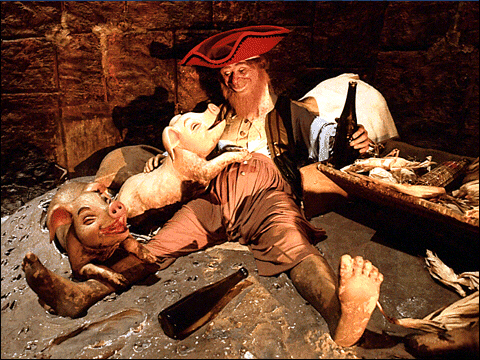 You voted Petey into the number three spot! Petey is just one great example of WDI Designer Marc Davis’ sight gags.  There are tons of these sight gags all through the ride. They are there to help set the scene and of course make us laugh. You have to ride this attraction more than once to see them all! 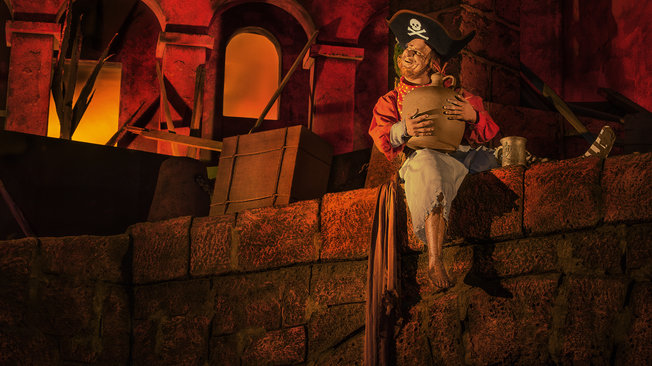 Harry beat out Petey by just two votes! It was a super close race! In the Magic Kingdom ride, a pegleg parrot used to sit above the doorway and greet guests. When they did the big renovation to add Jack Sparrow they removed the parrot and gave him a new home next to none other than Harry! 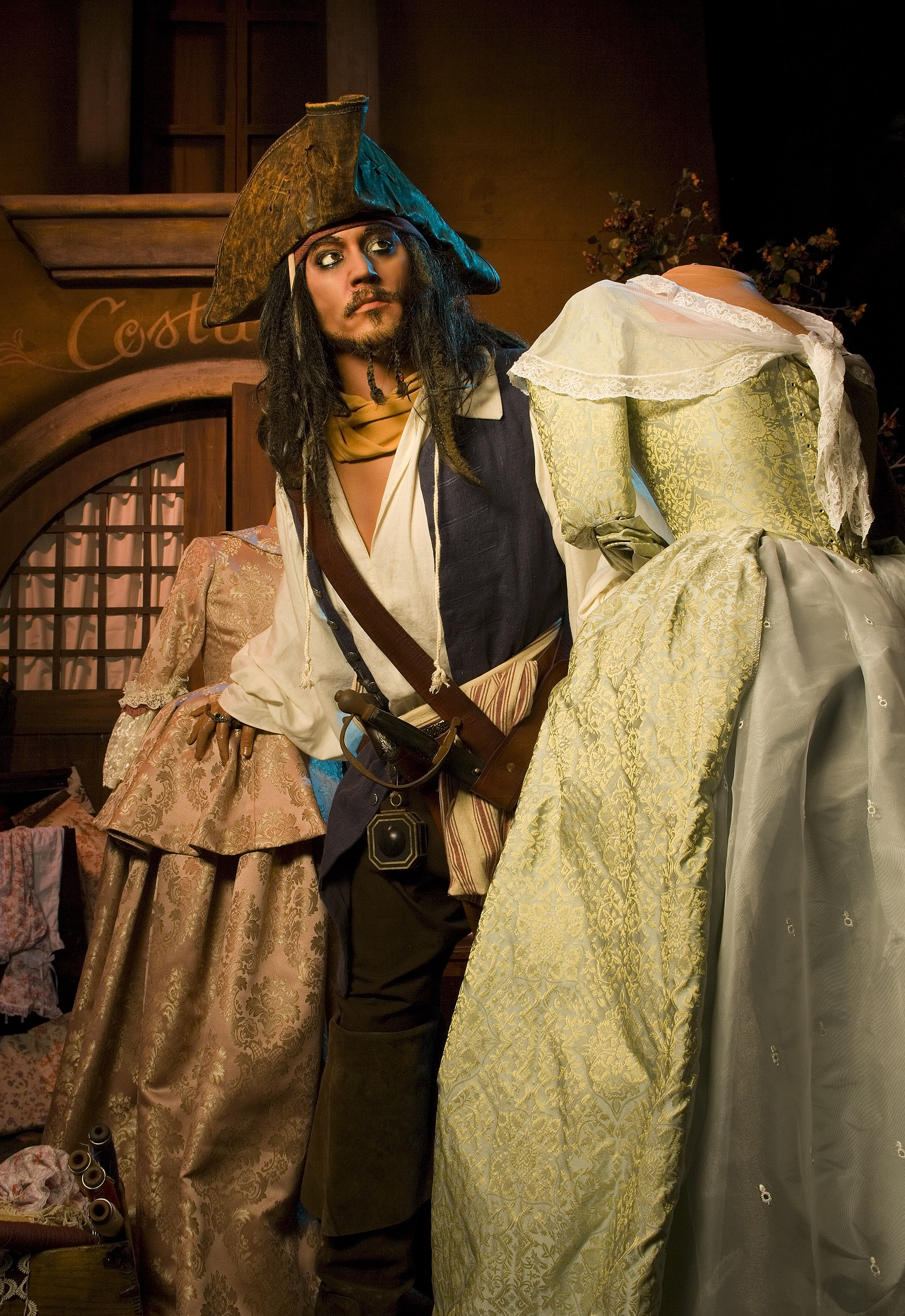 I am not surprised that Captain Jack got the most votes and plunged into number one! rebeccamck said, “Jack Sparrow is the main reason my kid will ride POTC, and we have fun counting his appearances throughout the ride … ”

Dawn said, “I remember the Sunday night Wonderful World of Disney episode where Walt himself shared his excitement about this new ride. Adding Jack Sparrow surprised me the first time. He was so realistic that we debated for awhile whether it was actually an actor and temporary until he appeared multiple times …” I love reading your comments. Thank you for sharing your memories and what you love about the ride!

In case you missed them on the 50 Fun Facts post, here are some of my favorite facts about Pirates of the Caribbean.

– Pirates of the Caribbean at the Disneyland Resort was the very last ride Walt personally oversaw before he dies in December 1966.

– The Disneyland version of Pirates of the Caribbean actually used to have real human bones… yep human bones. They did eventually take them all out, however to this day, it is rumored there is one human skull left in the ride but has not been confirmed.

– To create the ‘fire’ in the attraction, cloth, lights, and fans are all used. In fact, the Anaheim Fire Chief almost shut down the ride at one point for thinking it was real fire!

– X Atencio and George Bruns were the Imagineers who composed the famous ‘Yo Ho, Yo Ho, a Pirates’ Life for Me!’

– At the beginning of the Magic Kingdom version, guests experience one big drop. This wasn’t done to add a thrill to the ride, although it does have that effect. The drop is there because Disney needed to move guests below the train tracks above. The drop couldn’t be any bigger though because of the high water table in that particular spot.

– In the Magic Kingdom version, enter the queue on the left-hand side and look for the tall gun cabinets. The cabinets have hidden Mickey-shaped locks. As you float past the Treasure Room at the end, there is a hidden Mickey on the lock in the middle of the open wooden door, as well as on the cabinet locks behind Captain Jack Sparrow.

– One of the scenes in the Florida queue area is of two skeletons playing chess in a dungeon cell. If you look closely, you might notice that no one will win this chess game; the pieces are arranged in a eternal stalemate.

Thanks for voting and commenting!

Here is my Extra Magic Tip: Beware of the water! If you have not been on the Walt Disney World Pirates of the Caribbean since they installed new boats last year then you are in for a surprise. The new boats take on much more water! So be sure to hide your cameras and cellphones before the drop.