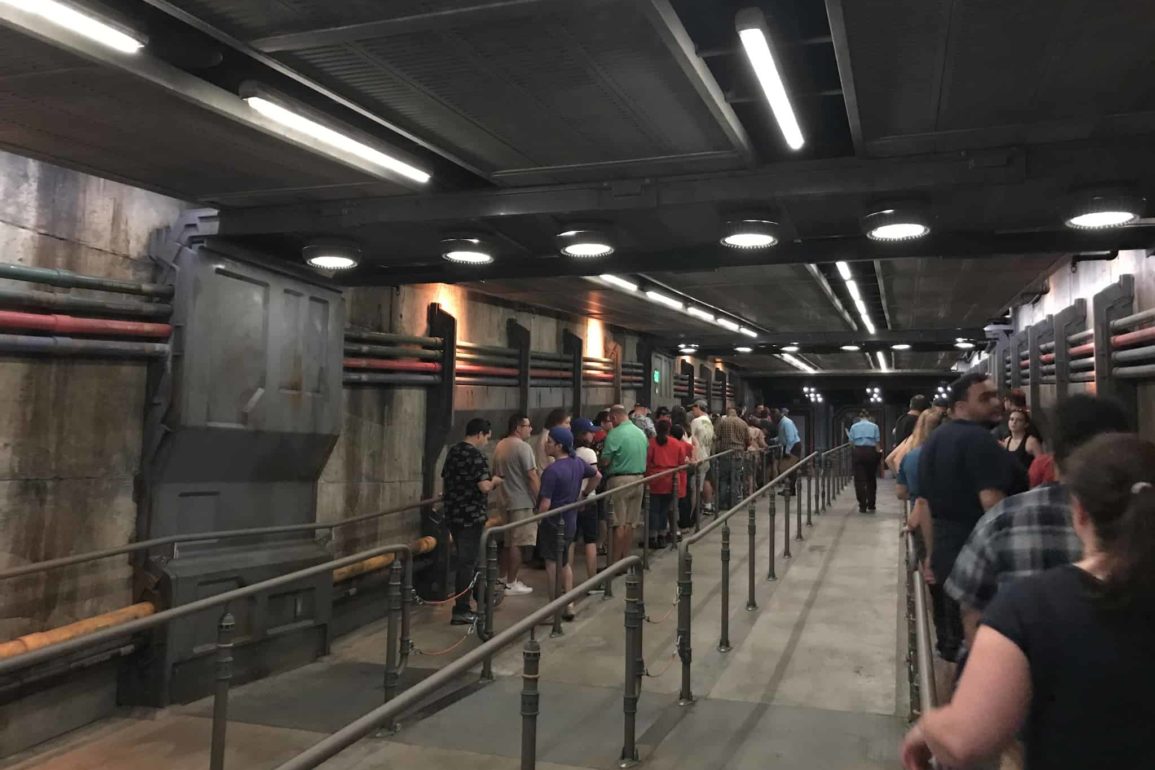 PHOTOS, VIDEO, REVIEW: Flight of Passage is the Next Big Theme Park Thrill Ride, Soars in Pandora – The World of AVATAR at Disney’s Animal Kingdom

I have anxiously awaited my chance to experience the heavily guarded secrets of the AVATAR Flight of Passage attraction in Pandora at Disney’s Animal Kingdom, and during yesterday’s annual passholder previews, I did finally get to ride on a Banshee. Well, virtually at least.

I already talked at length about the queue in my initial thoughts on Pandora, but now it is time to talk about the pre-show and ride experience.

Disney is still having a lot of problems with the ride, and cast members have told us that all 4 theaters have still not run simultaneously to this point. During yesterday’s preview, they were down to just one theater in fact, and luckily they did have a second come online here and there. With just about 2 weeks left to go, this is not a good sign, but hopefully they will figure it out before May 27th with a lot of long-shifts pulled by Imagineers and others involved. With a theoretical hourly capacity of 1900 guests (if all 4 theaters are functioning), there isn’t going to be much room for error in this heavily-hyped opening Summer.

The pre-show experience is a bit odd. Once you are corralled into one of several lines, you are then sent into decontamination/matching chambers in groups of 16. In this room, a rather odd scientist takes you through the decontamination process and then finds the AVATAR that is a match for you. While the scripting and acting for this room fall pretty flat, guests will have a lot of fun with the infrared technology in use and the blasts of air and lighting effects that take place. Guests are then whisked off to the briefing room where they learn from the scientist and Dr. Ogden about their experience and boarding the simulators properly. While it is a little bland and boring, it does a great job explaining what’s going on and makes watching the AVATAR movie unnecessary to understand the attraction.

Then it is off to the ride.

The seats are unique for a Disney Parks attraction and you’re not going to find any like this at another theme park. The “link seats” require straddling since you will be riding a Banshee (eventually), and they can be a bit hard to get into for taller and larger guests. My suggestion would be to get your knees as far in as you can before sitting down. While larger guests had many issues during earlier previews, the fairly big individuals visiting with myself yesterday all made it in just fine. We ranged between 6’0″ and 6’3″ and all made it in just fine. If you have larger or longer legs, that may be an issue, but probably not until people start cresting the 6’5″ mark or over 300 pounds.

Now it’s time to ride. If I could only use one word to describe the actual attraction portion, it would be impressive. The technology behind “link chair” is impressive and there’s a lot in each ride through that has to go right for a perfect experience, and it did for both of ours yesterday.

Warning, we’re going to get into some spoilers now…

So what is the ride system? Imagine if you took the Soarin’ system and placed single-person simulator chairs on each level. Oh, and give it the largest, seamless, most vivid 3-D projection screen you’ve ever seen; then you have Flight of Passage. Oh, and throw in some cool, new 3-D shades… 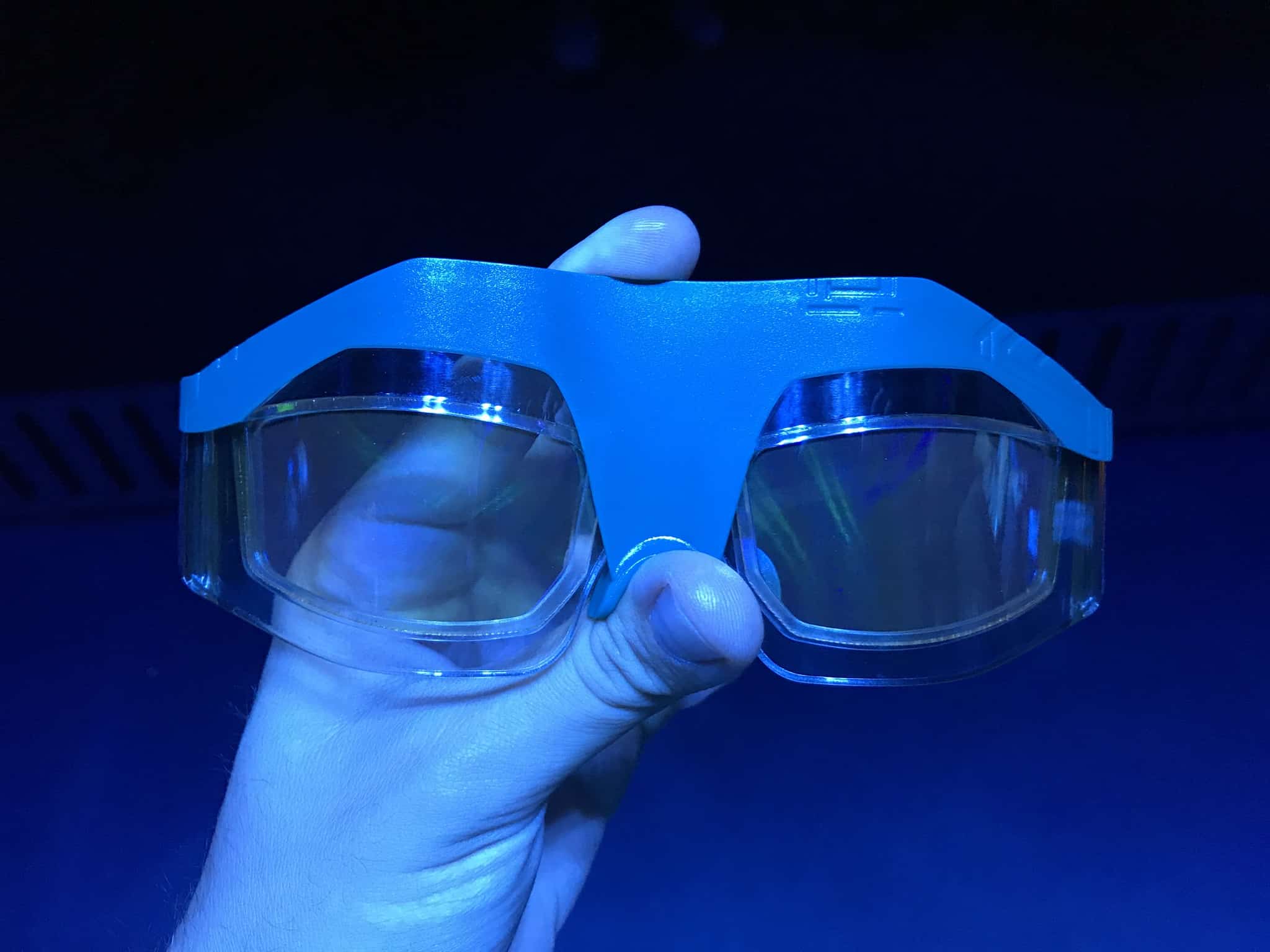 The individual link chairs provide for a very personal experience, but your family and friends are never so far away that you can’t still speak to them and hear them. One nice thing about this is it will avoid awkwardness of those utilizing the single rider line for this attraction as they get to actually sit alone, a first for anyone utilizing this service. I sometimes feel awkward using single rider lines as I think you can sense that the people you are seated with are never happy that you are there. This will be a nice change of pace. 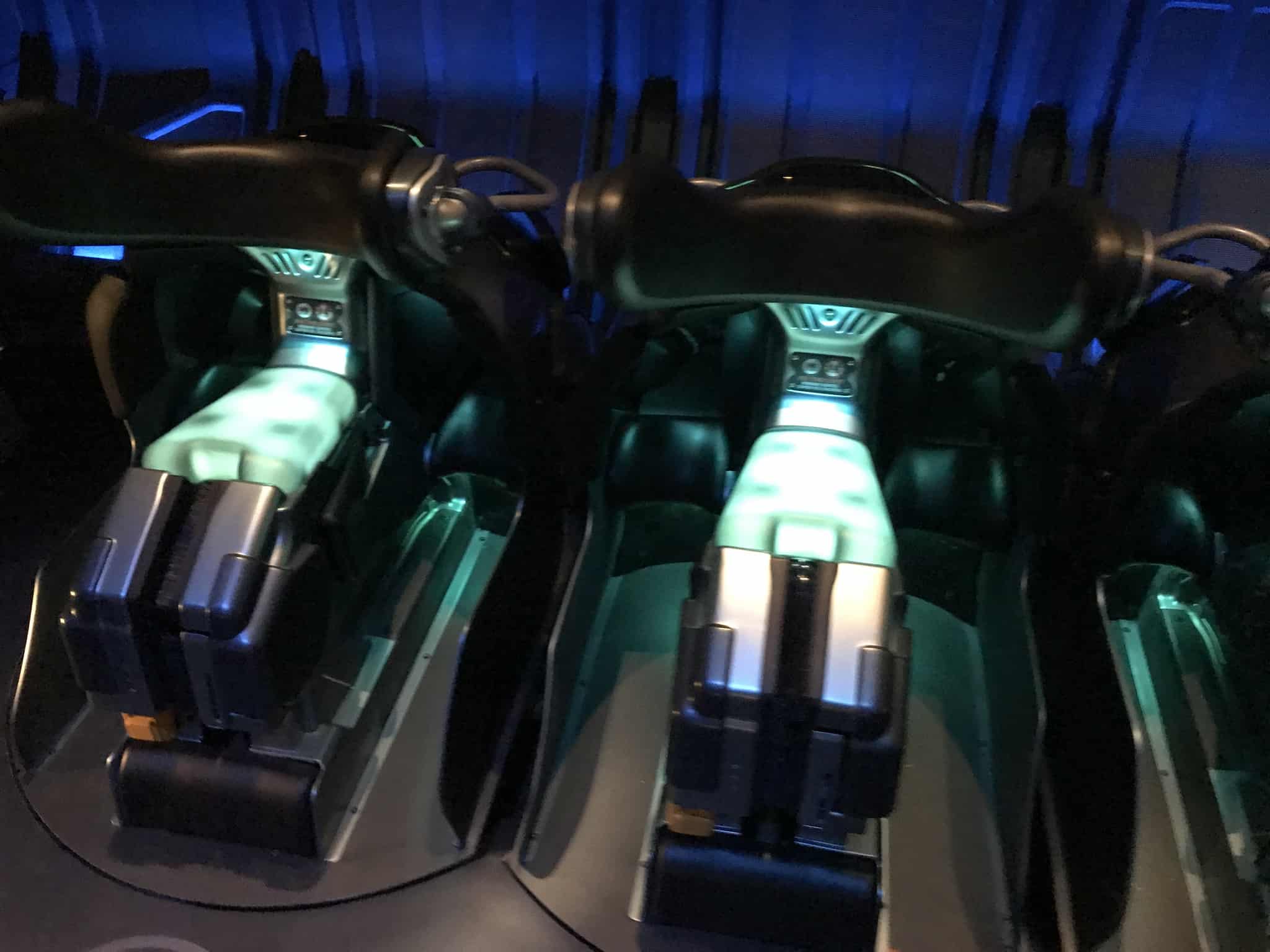 The link chairs are also insanely cool. There is a screen with a camera in front of you on each one, which provides some distraction while you wait for others to load (correctly) into their seats. It’s flashy and entertaining enough for what may be a little bit of a wait. Once the ride gets going, the motion on these is enough of a thrill for the whole family, but Expedition Everest it is not. It will likely be on the higher end of the spectrum for children, and the average adult will find it thrilling enough to be satisfied I believe. Basically, I don’t expect a lot of projectile vomiting on this ride.

The other neat part of the seats are the sound and movement effects that simulate that you are on a Banshee. You will feel the creature breathing under you and hear it from your seat. Some of these strange effects are also applied during the “linking” effect at the beginning of the ride that sends you mind into the Avatar out on Pandora.

And yes, no physical Banshee appears under you, and no, I don’t want to hear about it in the comments section of any post. Thank you in advance for understanding what a rumor is.

The ride itself is a lot of fun, with sequences that make what I thought to be a rather bland film franchise into a really exciting one. The action is non-stop, but never feels forced, flowing through the different ecosystems on the planet. The most amazing effect of the ride is the way it seamlessly blends in theater effects into the show. The mist on your face, waves crashing, and a seemingly endless array of odors are all felt (and smelled) from your seat. How they do this without the lingering odors found in Soarin’ prevailing through the rest of the ride is beyond me, but they make you feel like you are really there at all moments. All of this combined with the crisp-3D imagery makes for a fantastic ride. It is, without a doubt, the most realistic screen-based ride experience of all time.

Flight of Passage isn’t my favorite attraction I’ve ever been on, but it’s likely in the top 10 somewhere. Based on how guests respond to Soarin’ and the screen-based thrill rides at Universal Orlando, I think the general public is going to flip out for this experience, probably more than any theme park fan will. It is just a screen ride, but it is the best use of projection technology in a ride I’ve seen since Star Tours: The Adventures Continue, and it far surpasses that. The screens work here as they are not here to replace things that could be done with physical sets, but rather offer things that you just couldn’t do if this wasn’t presented on a screen.

While I often feel that Universal doesn’t care either way and just makes an attraction screen-based for budgetary reasons, Flight of Passage feels like a conscious effort to offer the best experience possible. As I felt the first time I rode Harry Potter and the Forbidden Journey, while I didn’t prefer screens, I enjoyed the way they were used in the ride (even if it is a bit nauseating). Screen-based rides aren’t the devil, and they don’t need to be outlawed, they just need to only be used when necessary. If Flight of Passage and Forbidden Journey are examples of how to best to use screens in new, cutting-edge attractions, then Escape from Gringotts and the Na’vi River Journey are good tutorials on how not to (using screens to replace things that could have been physically there).

Regardless, Flight of Passage will become the most popular attraction at Disney’s Animal Kingdom, and possibly in all of Walt Disney World come May 27th, 2017 when it officially opens. Either get a FastPass or be prepared to wait a really, really, really long time for this one folks.