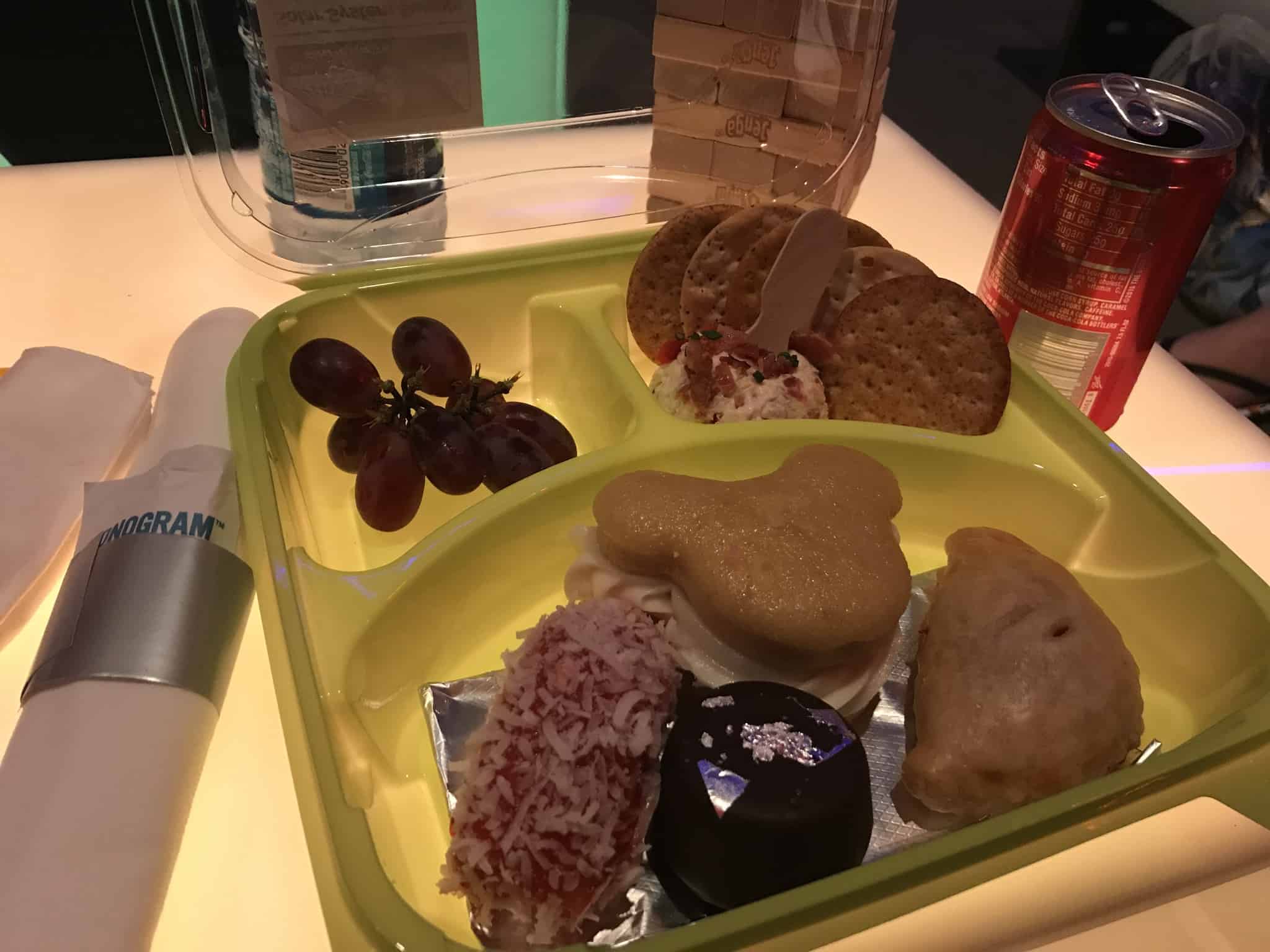 On May 26th, Disneyland Park launched the much-discussed Tomorrowland Skyline Lounge experience, an event meant to be a fireworks dessert party held on the second floor of the Star Wars Launch bay building. Based on the reaction our breaking of this story received, we decided to send someone out to review the very-first night of the experience on Friday. 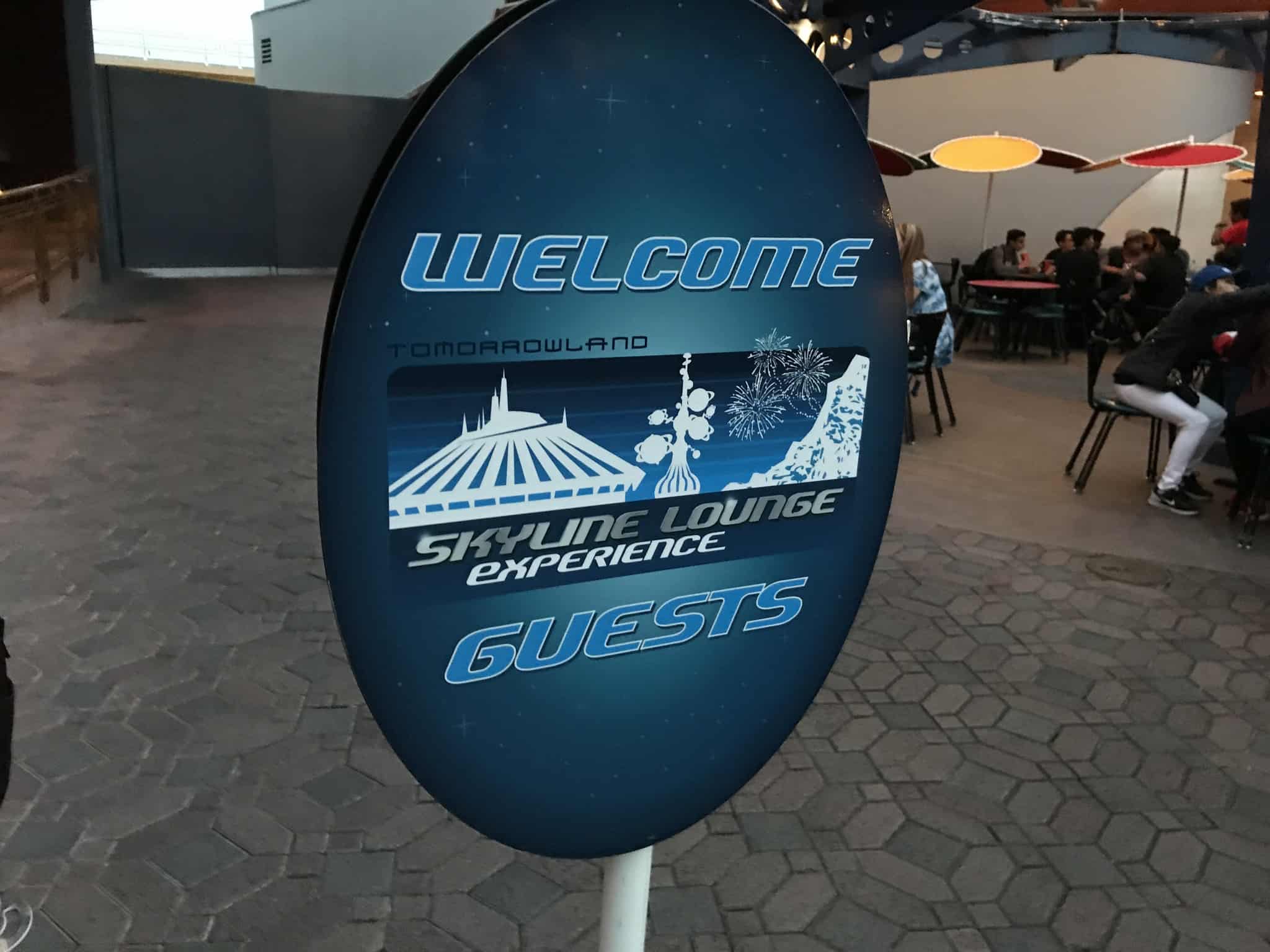 Check-in took place at the Tomorrowland fruit cart, located underneath the former Observatron/Rocket Jets. The price for this experience was $45 per person, that was not collected on making the reservation for some reason, so they do collect before giving you your lanyard and wristband.

Check-in began at 7:45pm and you are allowed up into the lounge at 8:00. You check-in (again) at the bottom of the ramp of the former-Innoventions building (now Star Wars Launch Bay on the bottom floor) where you are escorted up to the second level. 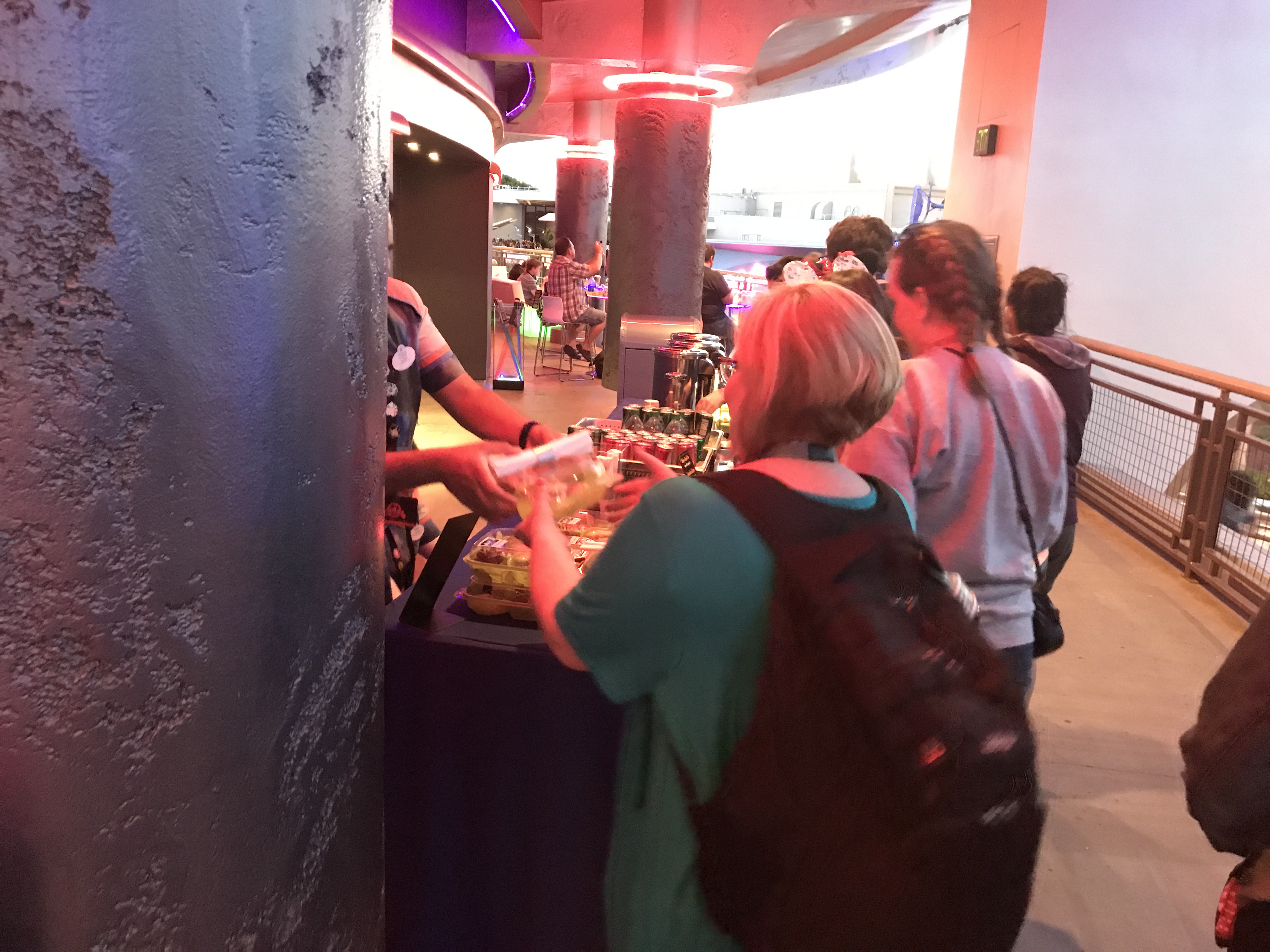 You then receive a free drink of your choice. Coke products, coffee, tea, etc., and you also receive your dessert box before being seated in one of the lounge areas. There were 4 or 5 different areas in all with several couches and chairs. At the very end of the balcony, there were several high-top tables if you would rather sit there. You were grouped with other parties, so you did have to share the space if you have a smaller group.

Once seated, you could charge your phone at one of the many charging stations, which is nice. Games were available to play such as Jenga, Connect Four and Checkers, because nothing says Tomorrowland like classic board games. You are in Disneyland, where you can play in essentially the world’s greatest playground, but hell, LETS GO FOR IT, CONNECT FOUR! 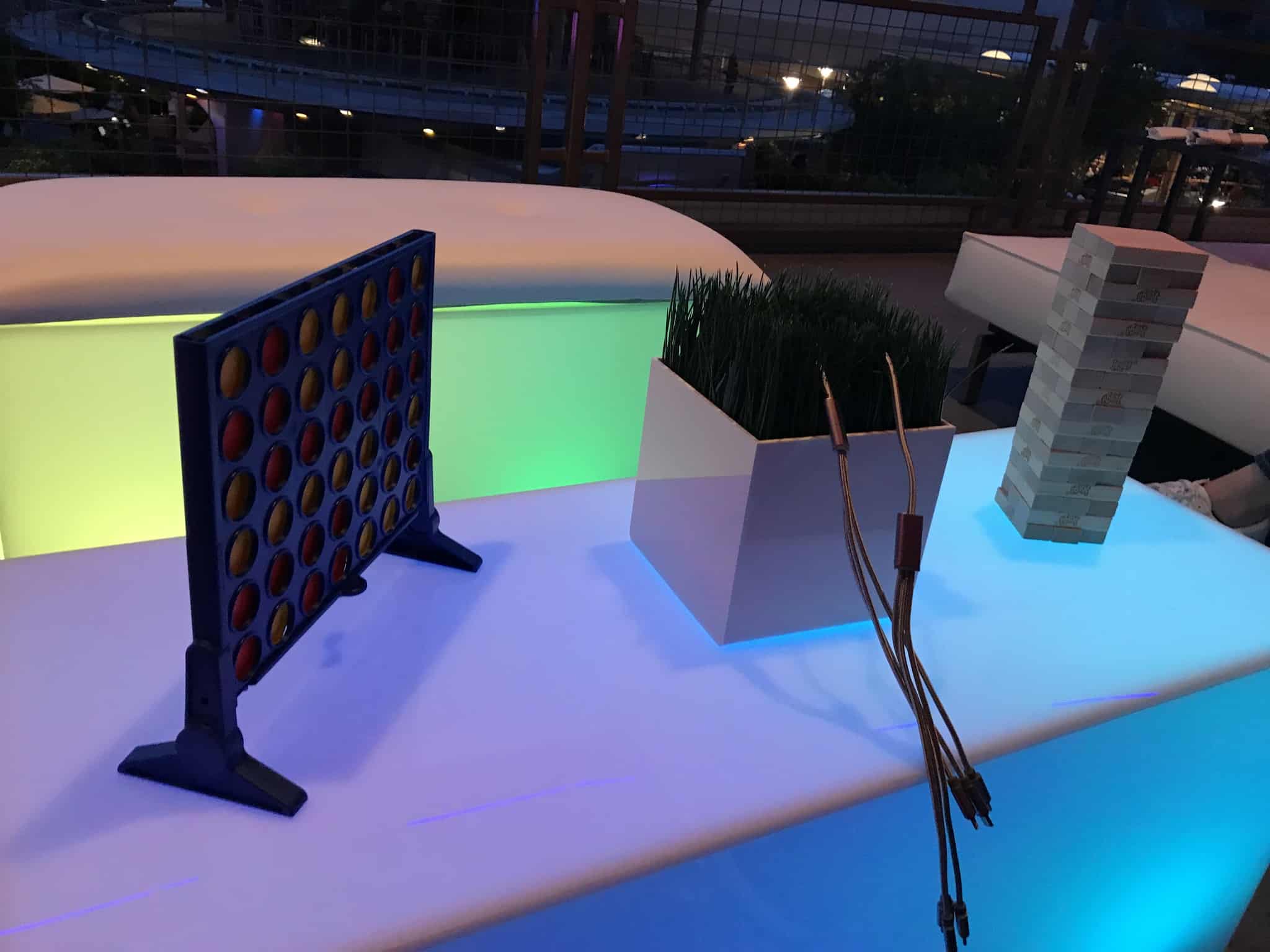 PhotoPass photographers were available to take pictures with the beautiful Tomorrowland scenery in the background, which is actually really neat. The views from up here are great, incase you have never been up on this patio (which I can’t imagine in many cases as it was open to the public for years). 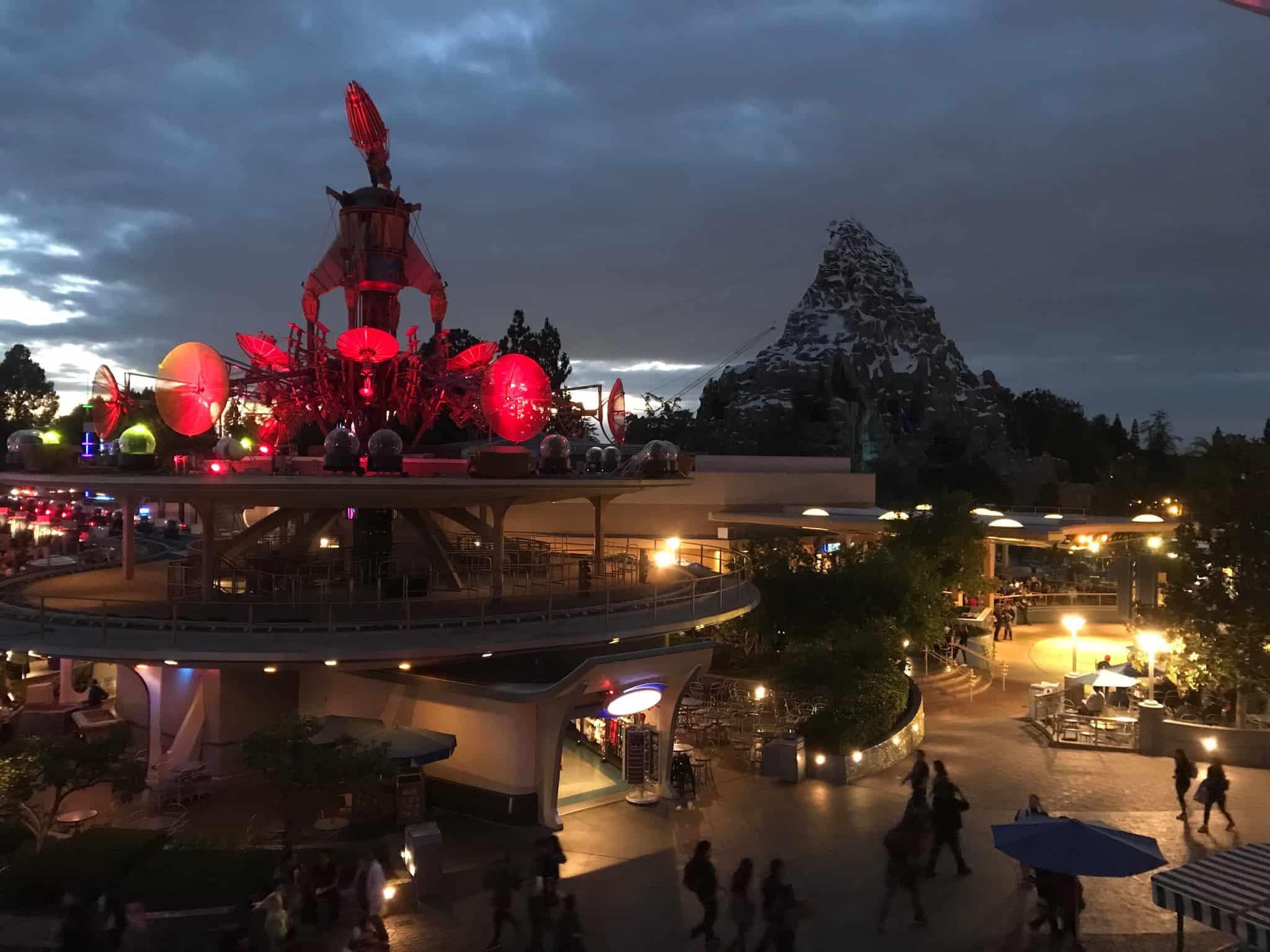 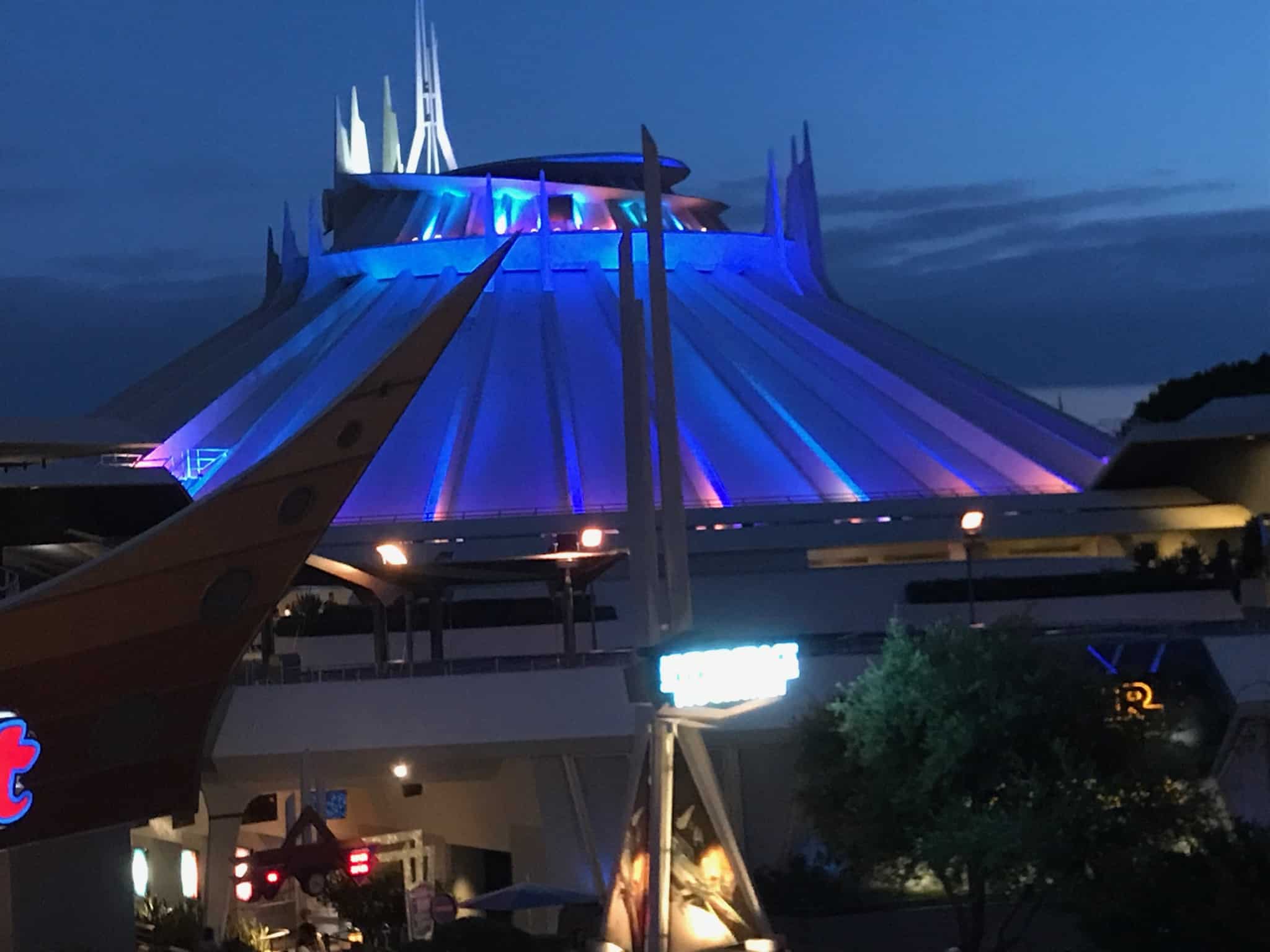 Mickey and Minnie even made an appearance for a short meet and greet, the pair also available for photos. Blankets were provided by cast members if you were a bit chilly as well. 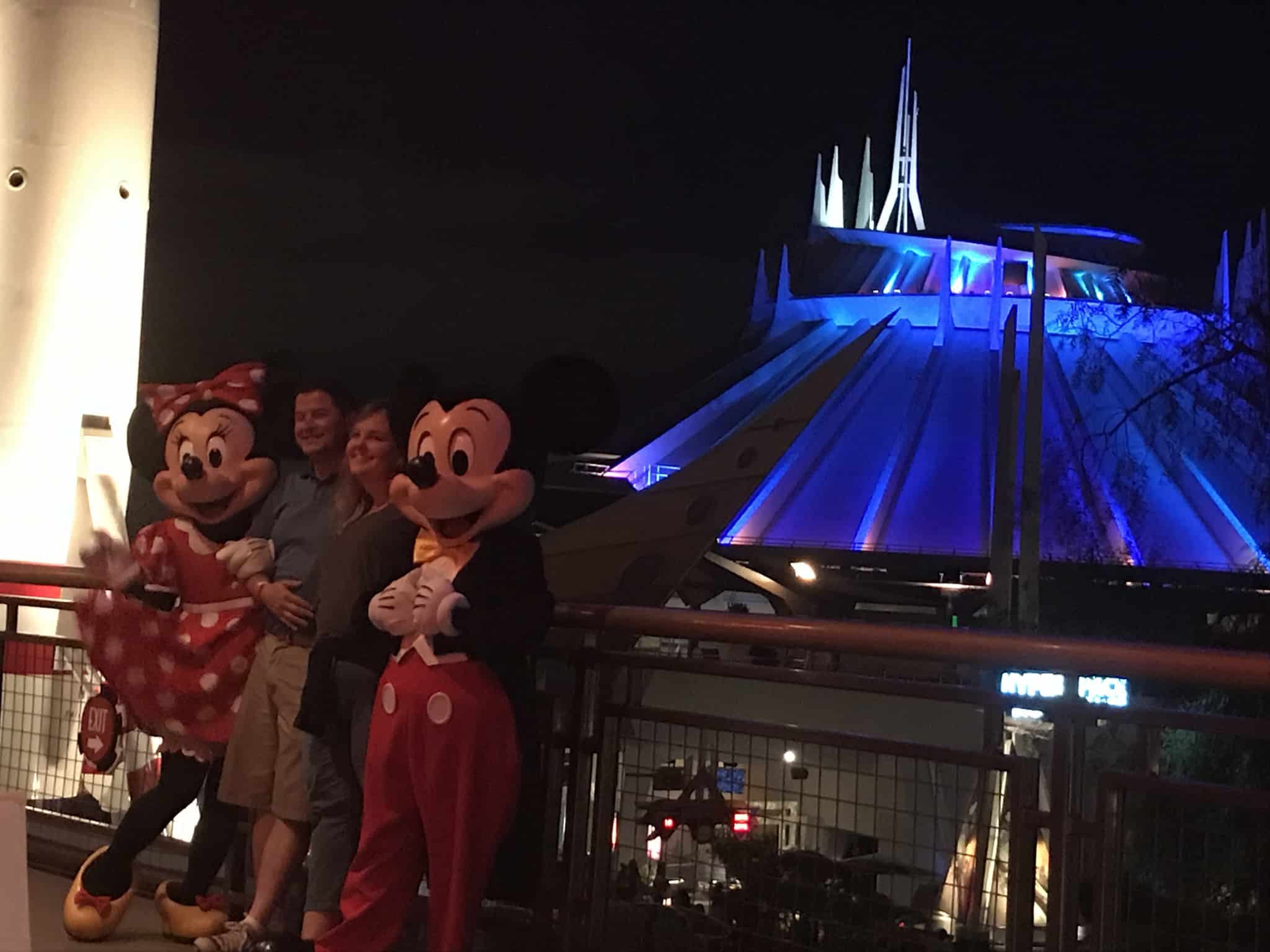 The lounge itself was nice enough. The couches were nice and there were plenty of places to charge devices.

The dessert tray, while very tasty, was extremely rich. It includes:

No one sitting in our group finished any of their desserts. Again, not because they were bad, but just incredibly sweet. The Coconut Comet was basically a Hostess Zinger pumped up to eleven, and if you don’t know what a Zinger is, please head to the grocery store and rectify that. The Moon Rocks were probably the highlight of the offerings; a delicious cheese spread covered in bacon with an assortment of crackers.

This is a nice offering and is at a low cost in comparison to the World of Color or Fantasmic dessert party packages. However, without fireworks, it’s a giant waste of time. Disneyland Park has the most unreliable nighttime spectacular of all U.S. Disney Parks, making it a gamble each night whether the show will be performed. Even the slightest amount of wind can cancel a show due to the proximity of the park to nearby neighborhoods. Seriously, only half of the Celebrate America Fourth of July fireworks shows ever scheduled at Disneyland, have actually happened.

This is probably why event organizers decided to call it Tomorrowland Lounge rather than a fireworks dessert party, to try to ease some of the complaints that are going to come regardless when the fireworks are cancelled. We were even told several times by cast members that the fireworks were only an addition to the experience and that the lounge is the experience by itself. Large disclaimers on the website when booking this alls make it unmistakebly clear.

In our opinion, you would be better off just spending your $45 on the many other delicious snacks in the park and grabbing a spot on Main Street, even if you do have to be around other people. It will result in less time lost from your day if the fireworks do not actually go off. On a side note, if you are on Main Street, you could have seen the short projection show that takes place on the front of the castle when the fireworks are cancelled. You’re also not going to see the awesome projections on Sleeping Beauty Castle if Remember… Dreams Come True does perform…

In review, unless you have the strong urge for a fancy Zinger and a rousing game of Jenga (which I hoped ironically would have been the Tower of Terror version), you should probably skip the Tomorrowland Skyline Lounge at Disneyland Park.