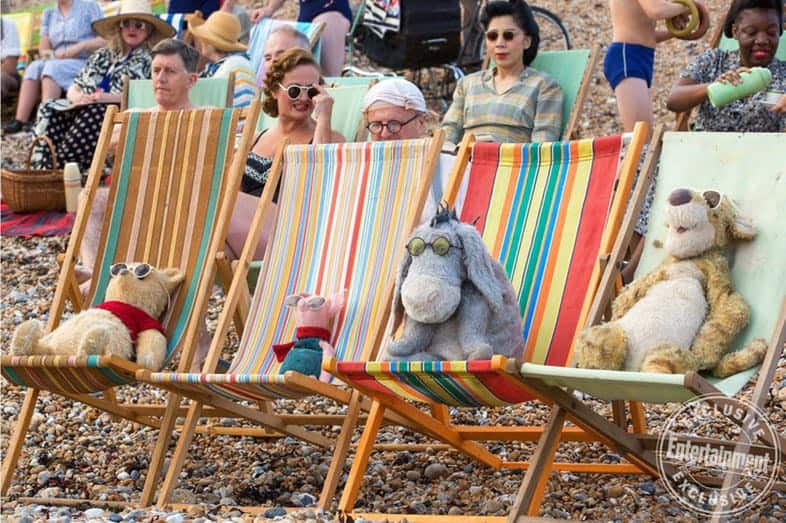 The most recent issue of Entertainment Weekly provides readers with an exclusive look at some new images from Disney’s “Christopher Robin”, as well as a detailed description of what to expect.

Christopher Robin has lost his way, and he’s not even deep in the Hundred Acre Wood.

That enchanted neighborhood where he once played as a boy with Winnie the Pooh and friends feels far away now that he’s grown, with a family of his own, weighed down by responsibilities and haunted by traumas he endured in World War II that stripped away his innocence.

But he’s not so lost that his old playmates can’t find him again.

In this fantasy from director Marc Forster (Finding Neverland), Ewan McGregor stars as the grown-up boy we know from the A.A. Milne books and the Disney cartoons. The year is 1949, and now he’s an efficiency manager at a luggage company, tasked with finding the resources to prevent many of his workers from being laid off. That will mean missing the vacation he has planned with his wife, Evelyn (Hayley Atwell), and young daughter, Madeline (Bronte Carmichael).

They’re heading to the Hundred Acre Wood while he’s stuck in London with work, when he gets a visit from his old friend Pooh. But he’s not the same person Pooh remembers.

“In those older stories, [Christopher Robin] purveys a lot of wisdom through the way he deals with Pooh. Pooh and Eeyore run through a lot of philosophical questions, and Christopher Robin is there to answer them somehow,” McGregor says. “And I think, largely, he’s just lost any of that childish wisdom and he’s a bit stuck. He’s just very work-minded and doesn’t have any time for play. I suppose that’s what the film is about: finding his relationship with his younger self again.”

Christopher Robin is trying to do the right thing by the other families who are counting on him, even if that means putting his own family aside. “I like that about him, that he is fighting for a greater good, not just for his own ego,” McGregor says. “It made sense, if he’d been through the war experience, he would just have experienced being responsible, literally, for men’s lives. And now he’s come back and he’s responsible for men and women’s livelihoods.”

Christopher Robin was a real person — the son of author Milne — and his story was dramatized in last year’s Goodbye Christopher Robin, but this movie is obviously a fantasy. His wife, Evelyn, is fictitious, but she represents a real type of postwar individual: the woman who held the homefront together, only to find herself relegated back to housework when her husband returns from war.

“She’s worked in schematics. She designed planes. So, she was active in the war in that regard and had her own career,” Atwell says. “This new man that returns from war represents the loss of the man that she married, but she sees him change when Pooh the bear comes back into his life. But, of course, she thinks he’s gone mad.”

Christopher Robin also thinks he’s losing his mind, but when Pooh (voiced once again by Jim Cummings) is joined by Tigger (Chris O’Dowd), Eeyore (Brad Garrett), Piglet (Nick Mohammed), and the others, the presence of something magical is undeniable — although he’s the only one who knows it.

Other people can see Pooh and the other woodland creatures. “But they perceive them as stuffed animals,” Forster says.  “It’s not that they’re invisible.”

The director says Pooh himself is the perfect balance between childlike innocence and adult experience.

“He’s a mixture of toddler and old man, when you read the books and watch the animation,” Forster says. “He has these Poohisms that land, but they are totally absurd. It always reminded me a little of Peter Sellers’ character Chauncey Gardiner from Being There.”

To quote that character, “As long as the roots are not severed, all is well.”

Fortunately, the roots to the Hundred Acre Wood run deep.

Christopher Robin will be released Aug. 3.

Next
PHOTOS: ‘Solo’ Merchandise Arrives at The Star Trader in Disneyland