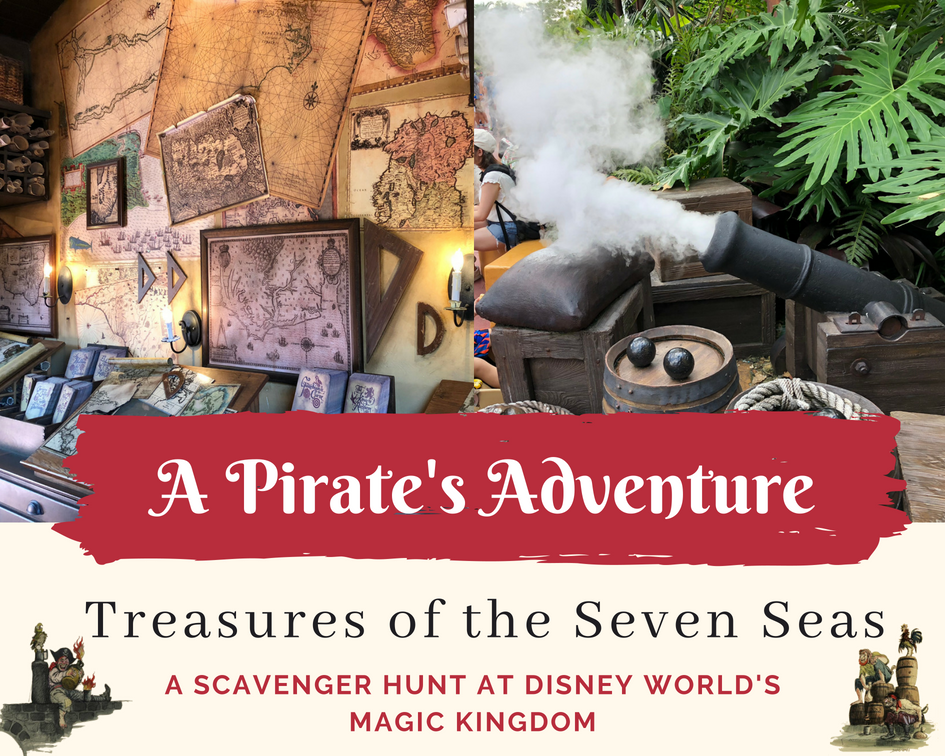 Aspiring pirate or just an adventurer at heart, A Pirate’s Adventure at Disney World’s Adventureland is a swashbuckling scavenger hunt for scallywags of all ages.  Enlisted pirates will help Captain Jack Sparrow in finding 5 lost treasures hidden throughout Adventureland park.  But be en guard along the way to fend off Captain Barbossa and those other landlubbing British as they try to beat you to the loot!  To learn more about this FREE interactive scavenger hunt, let’s take a dive beyond the rides with Disney World’s A Pirate’s Adventure: Treasures of the Seven Seas.

Firstly, let me emphasize that although A Pirate’s Adventure IS centered around The Pirates of the Caribbean theme, you do NOT have to be a fan of the ride or franchise to have fun participating in this interactive scavenger hunt.  This is an activity for old and young, first-time visitor or the Disney expert… anyone who wants to try something a little out of the box… the treasure box, that is.

To play the game, you’ll first need to head to what used to be The Crow’s Nest shop at the far west end of Adventureland, just beyond the Pirates of the Caribbean ride.  The cast members there will be happy to enlist any new recruits who are brave enough to take on the daring challenge.  Once at The Crow’s Nest, just present your Magic Band or ask for a special talisman to get you on your way.

New recruits are assigned one of five different treasure hunts, each with a unique mission that will send you throughout all of Adventureland park.  Each mission takes about 20-30 minutes to complete, but can be accomplished at your own pace throughout the day or even over the span of a few days if you need.  Just be sure to complete your quest before 6:00 pm if you want to collect your card that day.  You can continue your quest or return to The Crow’s Nest any day after you begin, but they are only open from 12:00-6:00 pm.

For every successfully accomplished mission, pirate recruits will receive a special treasure finder card.  Collect all 5 cards and you’ll earn a completion card signed by Captain Jack himself!  Who knows, after besting just a couple of the missions, you might even earn a “free” Fast Pass+ for the Pirates of the Caribbean ride!

Each of the five quest maps will guide you around Adventureland to unbury 5 different hidden touch points throughout the park.  Be sure to go in order of what is revealed to you at the touch points and not just by locating the points on the map.  Order is important for defeating Barbossa and those other British sea rats!

Once you’ve uncovered a touch point location from your map, use your Magic Band or talisman to activate the game.  The touch points are all marked by the symbols you see on the map (a cannon, sabres, a ship’s wheel, etc.).

This is where the real fun begins!  After activating the touch points, the park “comes alive” and interacts with pirate recruits.  Cannons will fire, skeletons will awaken, tiny boats even sink inside their bottles!  In addition to the park awakening, you’ll also hear the voice of a character within the game.  The characters will give you additional clues and hints to help you find the next point on your map.

After activating each of the five touch points and completing your quest, return to The Crow’s Nest to collect your treasure finder card for each challenge successfully accomplished.  As mentioned before, if you complete each of the five quests, you’ll also be rewarded with a sixth card from Captain Jack in thanks for finding the 5 lost treasures.

Know Before You Go

Is A Pirate’s Adventure worth the time to play?  You bet your galleons and doubloons it is!  Not only does the activity come at no additional charge on top of your park ticket, but you come away with the bonus map(s), cards, and an extra FastPass+ or two.  These kinds of souvenirs are so much more meaningful to me than those you can just buy.

Completing the quests was a fun way to fill time between our FastPass reservations and gave us a way to experience Adventureland in a way we’d never seen before.  We especially loved being able to interact with the park and see it “come alive”!  It’s for this reason that ANYONE can have fun playing the game, be they pirate, princess, or space ranger from Star Command.

The only part of A Pirate’s Adventure that might cause a mutiny is that the hours are a bit limited.  Not that you can’t complete any of the challenges within the 12:00-6:00 pm time frame, but when you factor in dining reservations, parades, Fast Passes, and more, it was slightly frustrating that the adventure closed at 6:00 pm.  However, it’s nice that you can continue where you left off on a return visit another day.

The maps are easy enough to read, but actually locating the touch points might prove challenging for some children (and adults!).  Don’t hesitate to get some help from nearby cast members who’ll be happy to give you some guiding hints.

4 thoughts on “BEYOND THE RIDES: A Pirate’s Adventure – Treasures of the Seven Seas at the Magic Kingdom”