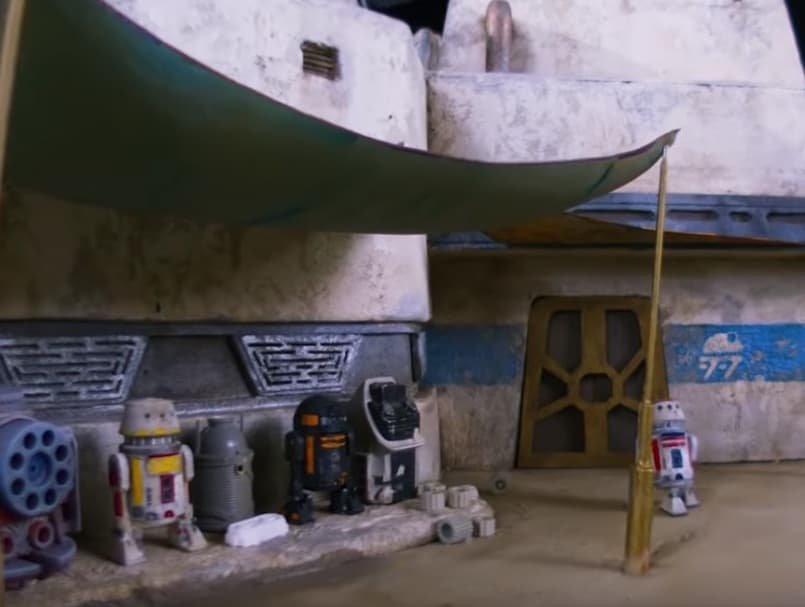 Here at WDWNT, we’re already making plans to make a beeline over to Droid Depot at Star Wars: Galaxy’s Edge to get our hands on a DJ R3X as soon as it opens, but new interactive elements revealed for the shop have me thinking we’ll be spending far more time in there than we think.

A recent article from The Mercury News details how special droid tracks were made throughout the grounds of the Black Spire Outpost, leading guests right to the Droid Factory shop, where they can also meet a bunch of audio-animatronic astromech droids lined up in front of the workshop for a photo op reminiscent of the scene in Episode IV with all the droids stacked up for sale inside a Jawa-manned sandcrawler:

But that’s not all…

If you look down, you’ll spot the distinctive droid tracks right away. Follow them around the corner into an intimate courtyard covered by a sail-like canopy. The droid “footprints” will take you to a little animated scene behind the workshop where a red R5 and a yellow R2 are undergoing some maintenance.

“It’s just going to be stacked with droid pieces and parts,” Beatty said. “There are two animated droids back there. They will be getting an oil bath. They’re getting a little bit of refurbishment.”

Inside the workshop, guests will be able to build R2- and BB- series droids.

Each droid will stand roughly 18 inches tall and be remote-controlled. Controllers can also trigger accessories which can be added on to droids, like blasters and mock tools. They’re so customizable, that they’ll even be able to react to elements of the land. Droids will be powered by AA and AAA batteries… and they aren’t the only remote-controlled droids that’ll be wandering the land.

Imagineering plans to have remote-controlled droids built from the actual Lucasfilm molds roaming the streets of Black Spire Outpost, although our sources indicate that these rolling droids won’t make an appearance until things in Galaxy’s Edge finally calm down a little after the initial crowds.

As far as the tracks mentioned earlier in the piece, Imagineers actually took rubbings from the wheels of the 1977-era R2-D2 to create a set of three droid wheels that were then used to create droid “footprints” throughout Galaxy’s Edge.

Take my money, Droid Depot. Now, if only they had a Chopper meet and greet…

Next
PHOTOS: New Americana Apparel and Accessories Arrive at World of Disney in Disney Springs