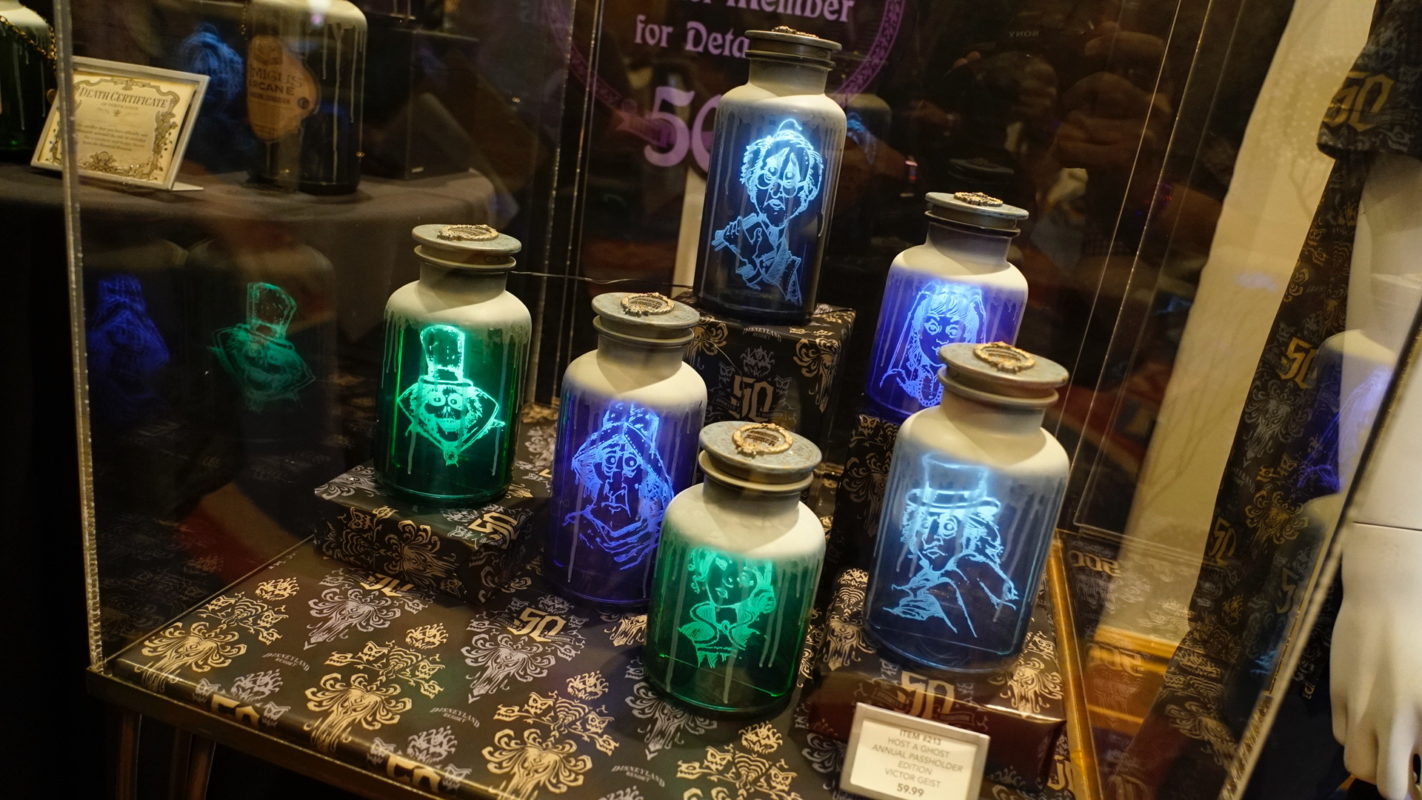 Disney Parks is celebrating The Haunted Mansion’s 50th anniversary the right way, with tons of merchandise released over the entire week, and a two-night swinging wake over at Disneyland Park. One of the most hyped pieces of merchandise that was previewed in official releases was the introduction of new, interactive Host-A-Ghost Jars. We weren’t sure what exactly to expect here. Were these just decorations? What was the extent of the “interactive” elements? Turns out the short answer is yes, and not very much. Now, do not pull down on the safety bar for this review. I will lower it for you. 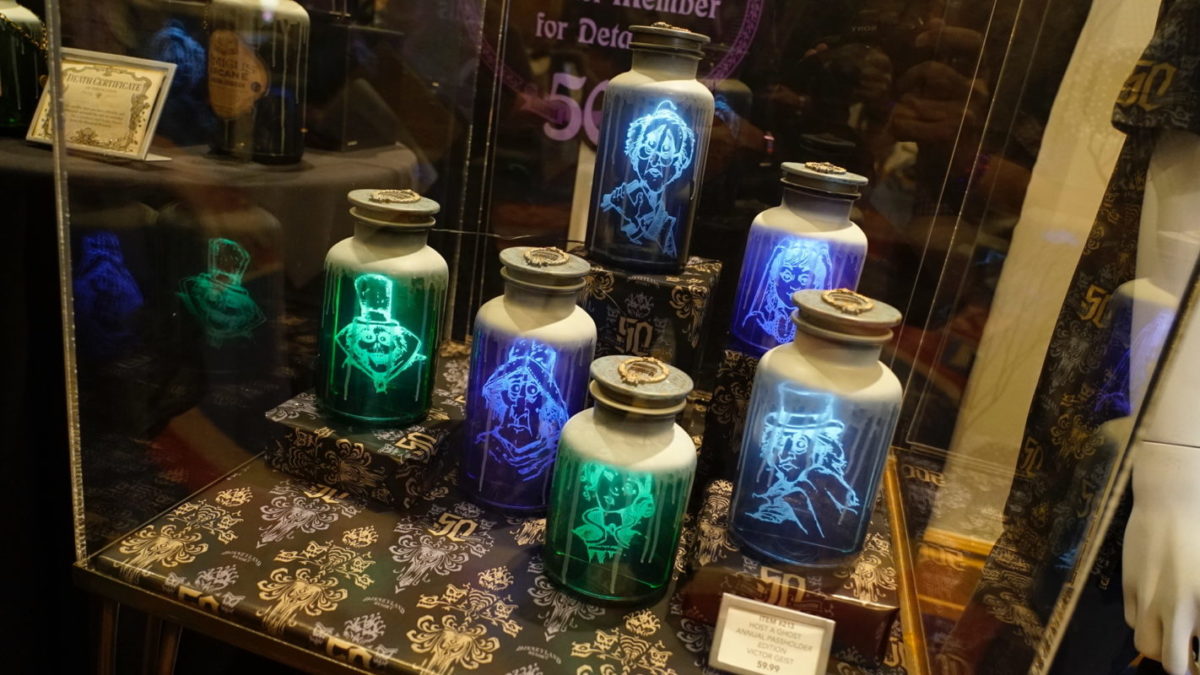 We find ourselves materialized at the “The Haunted Mansion: Celebrating 50 Years of Retirement Unliving” event, where guests have exclusive first access to merchandise released just for the 50th Anniversary. While a lot of supposedly exclusive merchandise actually went on sale at both Disneyland and the Magic Kingdom this week, at least they did a good job of keeping these jars under wraps. Starting tomorrow, these should be available to the general mortal public on both coasts. 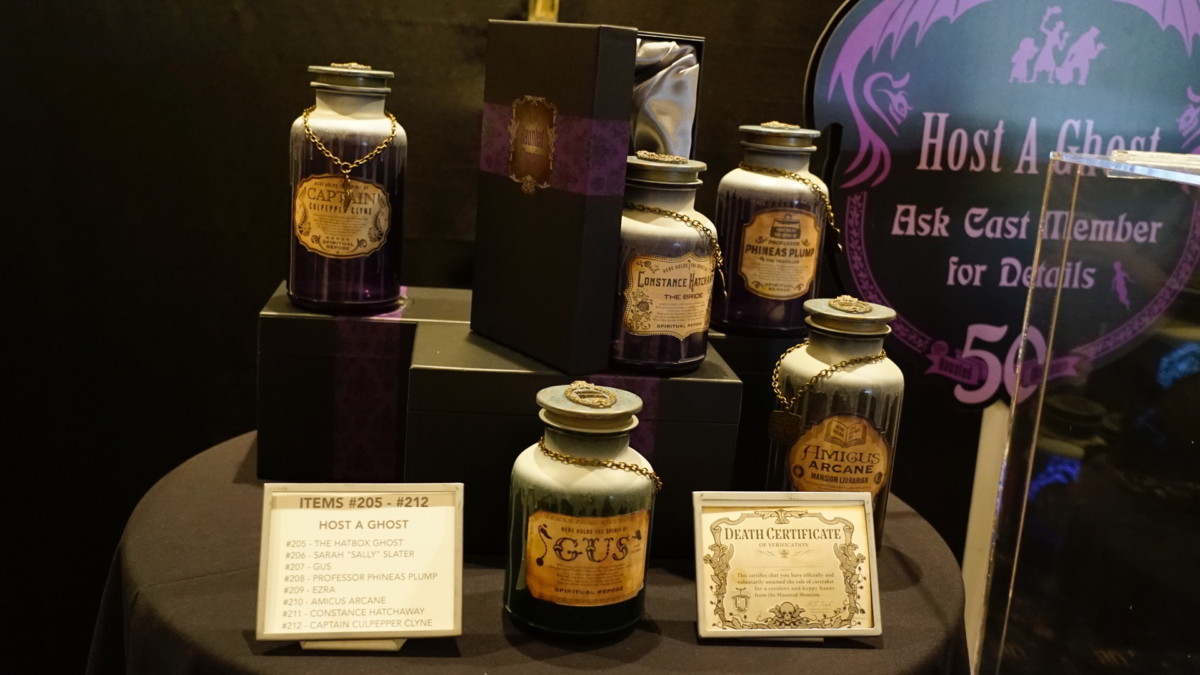 Each Host A Ghost Jar costs $59.99. You can choose between the Hatbox Ghost, Sarah “Sally” Slater, Hitchhiking Ghosts Gus and Ezra, Professor Phineas Plump, Amicus Arcane, Constance Hatchaway, Captain Culpepper Clyne, and Victor Geist (the Annual Passholder exclusive.) The jars are plastic and battery-powered, but feature a raised sculpted Haunted Mansion logo on the top lid, as well as weathering to make them seem old and harrowed. The label for each character is specifically designed and includes a short blurb giving context.

Each jar comes in a satin-lined box with a commemorative “Death Certificate” as well as a chain pertaining to each character. You have a ball and chain for Gus, a stack of books for Amicus Arcane, a bowler hat for  Ezra, ballet shoes for Sarah “Sally” Slater (of Stretching Room fame), and so on. If you want to get creative, you could work the chains into a Disneybound outfit, but the chains are meant to be worn around the jars themselves. 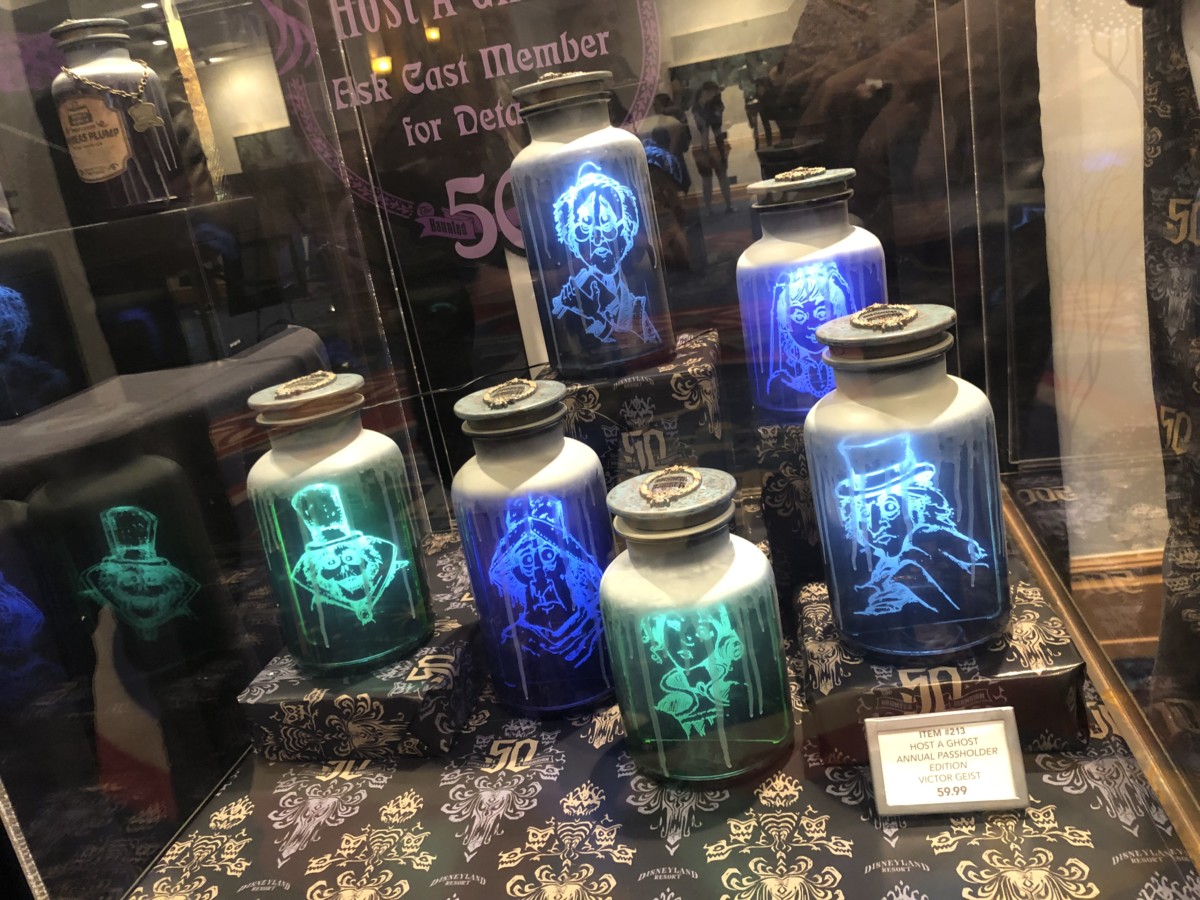 The conceptual history of these is neat in that the jars themselves are designed after the jars that line the shelves at Memento Mori in the Magic Kingdom. Madame Leota keeps these ghostly spirits contained in these jars, and upon purchase, you become their caretaker. The characters featured in the series span both embodiments of the attraction, with Hatbox Ghost pertaining to Disneyland and both Amicus Arcane and Captain Culpepper Cline coming from the interactive queue at Walt Disney World.

However, that’s where the extent of the coolness with these kind of ends. The main issue we have with these is the lack of sounds, or any real interactivity. Upon touching the lid of the jar, there are three different sound bites. You have Madame Leota saying a cute, custom jar spiel:

Family, friends, next of kin… summon a spirit from the Mansion! Ghoulies travel from near and far, all invited to reside in a jar!

The recording doesn’t sound anything like the original voice, though. Tap the lid again and you get the Haunted Mansion foyer music, and once again for the voice of “Little Leota” (as she’s known) saying, “Be sure to bring your… death certificate.” Snapping the lids on or off will yield laughs and cackles from beyond. Of course, the jars light up with artwork featuring each character inside (as you can see from the photos), but they turn off once the sound bite is over. The missed opportunity here lies with the sounds. Each of these could’ve had their own sounds, or at least different variations for each jar. Having them all be the same just makes these items feel rushed and cheap.

We took a moment to show you each and every one of these jars as well as show you how they work. Check out the video below to view Tom fiddling with the ghost jars:

All in all, these will make great Halloween decorations moving forward or would also look great in any Haunted Mansion room or office. The jars come in different sizes, so you can arrange them in all sorts of ways. Do we feel like foolish mortals for paying $60 for plastic light-up jars? Absolutely. But as they say at the Mansion, there’s no turning back now…

I guess a ghost will follow me home, after all.