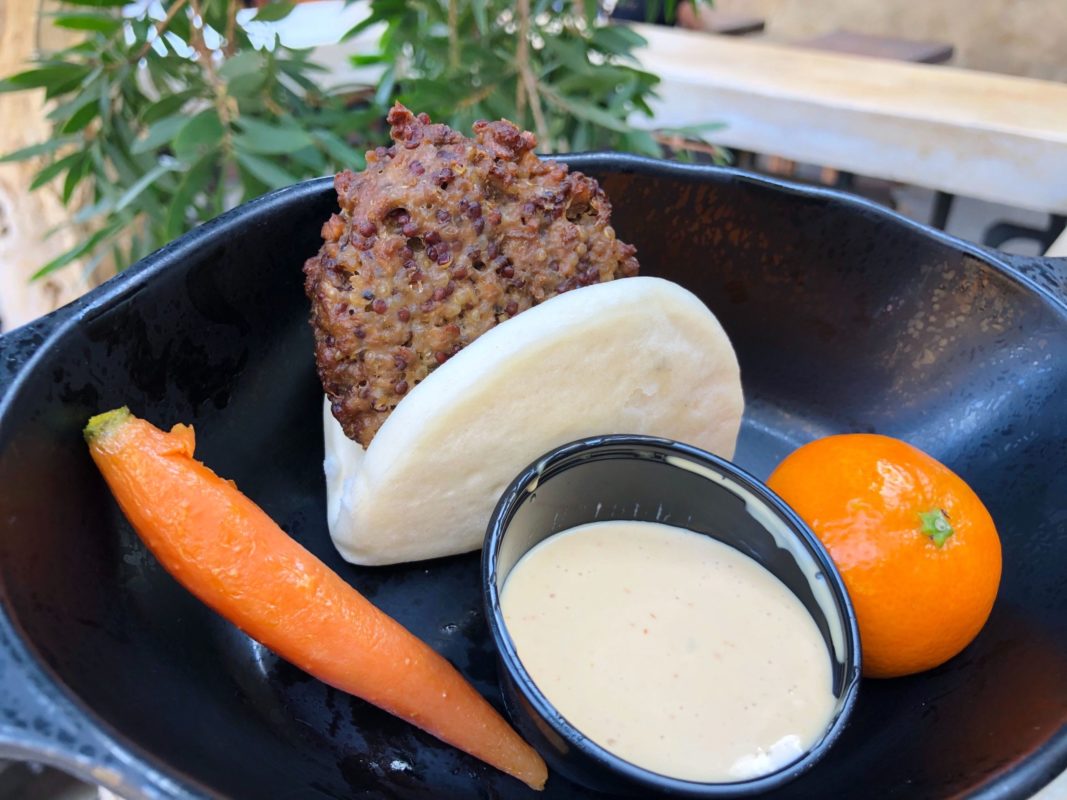 In order to better appeal to the various dietary needs and changing tastes of travelers to Batuu, there are five new food items located throughout Star Wars: Galaxy’s Edge in Disneyland Park. These are exciting additions, as Galaxy’s Edge is still a relatively new land, but it seems they’ve been tailoring menus and adding to them in response to guest feedback. There are some new vegan items, like the Ronto-less Garden Wrap at Ronto Roasters, and some… very not-so-vegan options, like the new Kyryll Pork Rinds. Along the snack front, there’s the all-new Chocolate Popcorn with Crait Red Salt over at Kat Saka’s Kettle. We even made it over to the shady dive at Oga’s Cantina for the new Happabore Sampler charcuterie tray. Now it’s time to close out the last review with arguably one of the cutest new additions to the menus on Batuu: the Garden Patty Bun kid’s meal at Docking Bay 7 Food & Cargo. 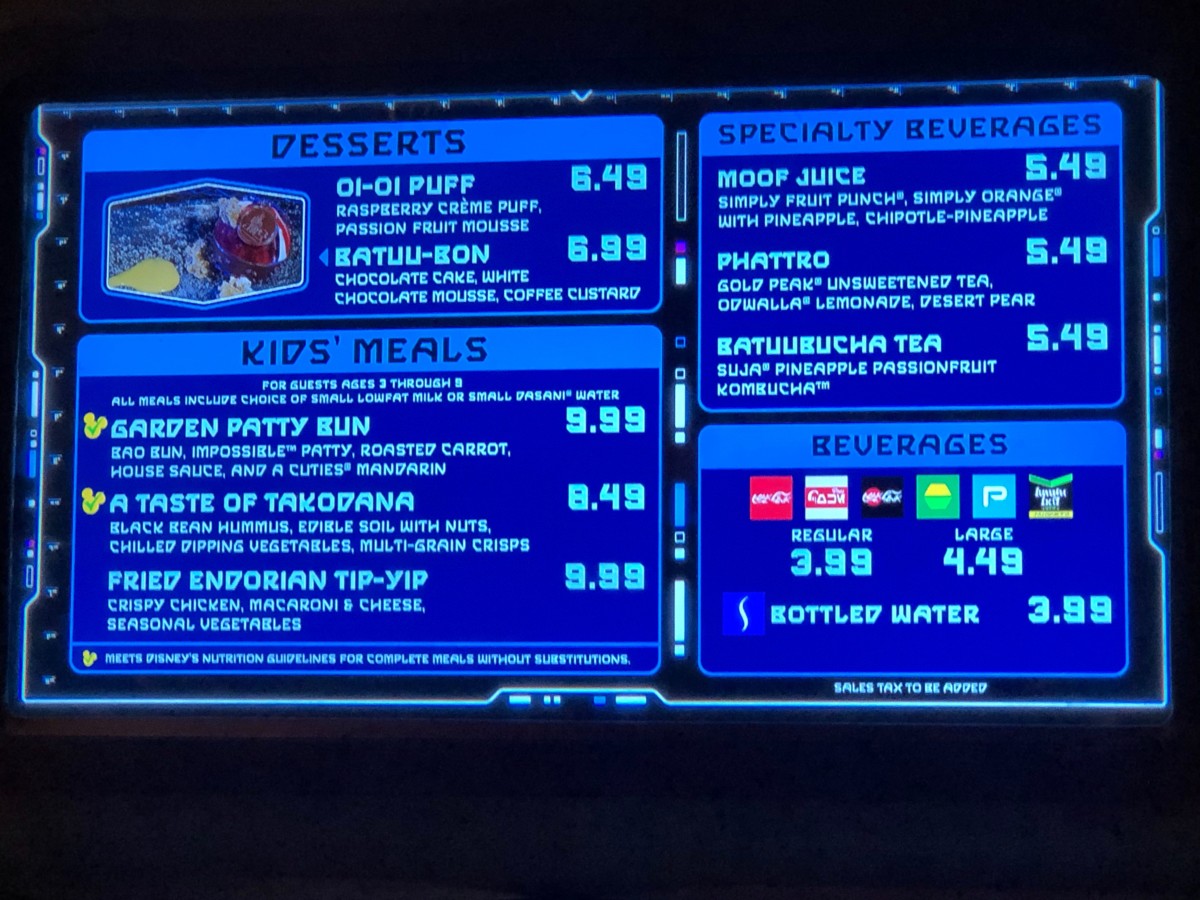 Listed under the Kids’ Meals menu for $9.99, the Garden Patty Bun replaces the kid’s Yobshrimp Noodle dish for something slightly more familiar for the younger travelers to Batuu. Do note that this also includes your choice of a small lowfat milk or a small Dasani water. 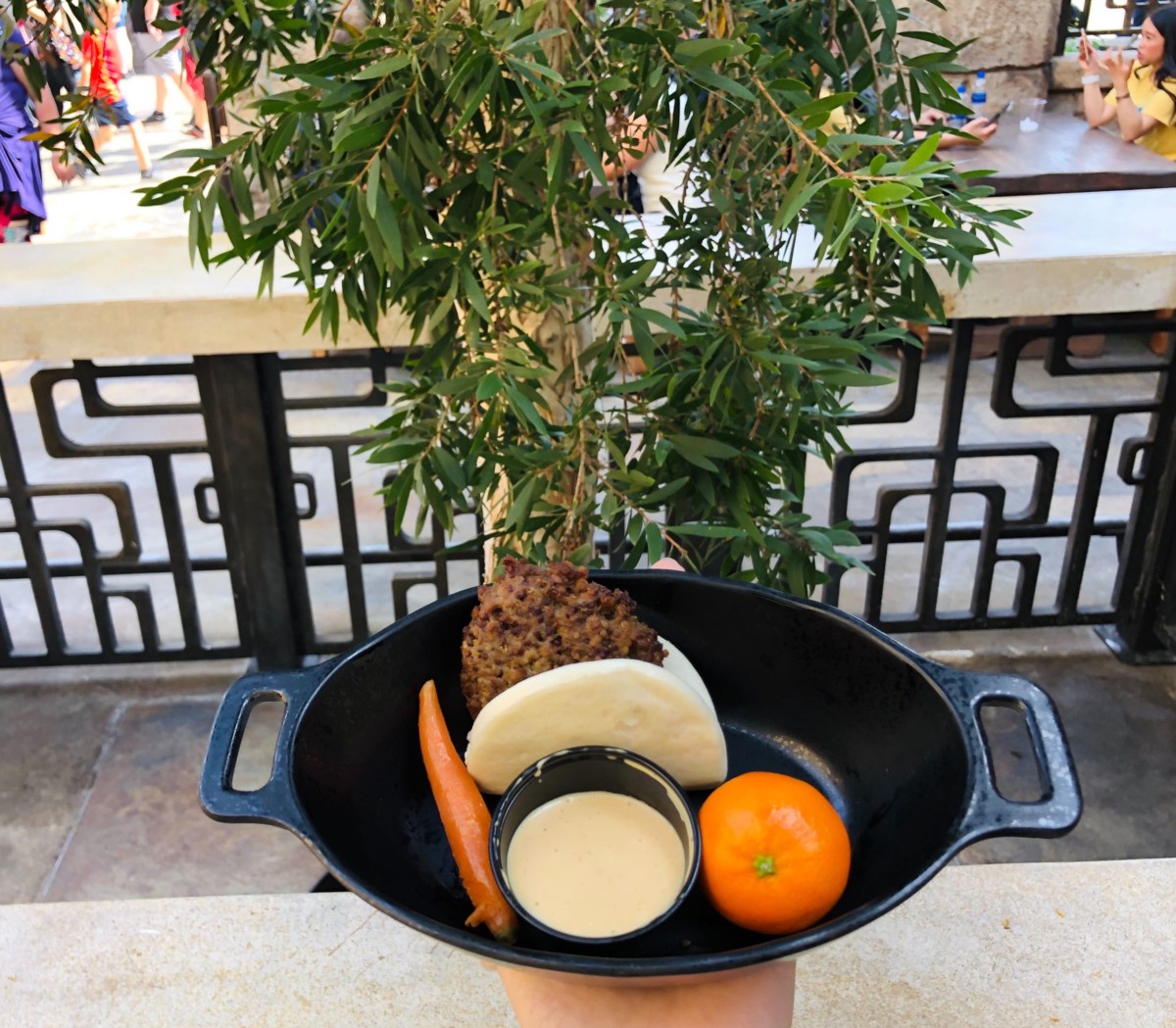 The garden patty, which is fairly similar to the plant-based meat used in the Felucian Garden Spread, is wrapped on one side by a bao bun. A tiny roasted carrot, Cuties mandarin, and a small tub of “house sauce” come on the side. 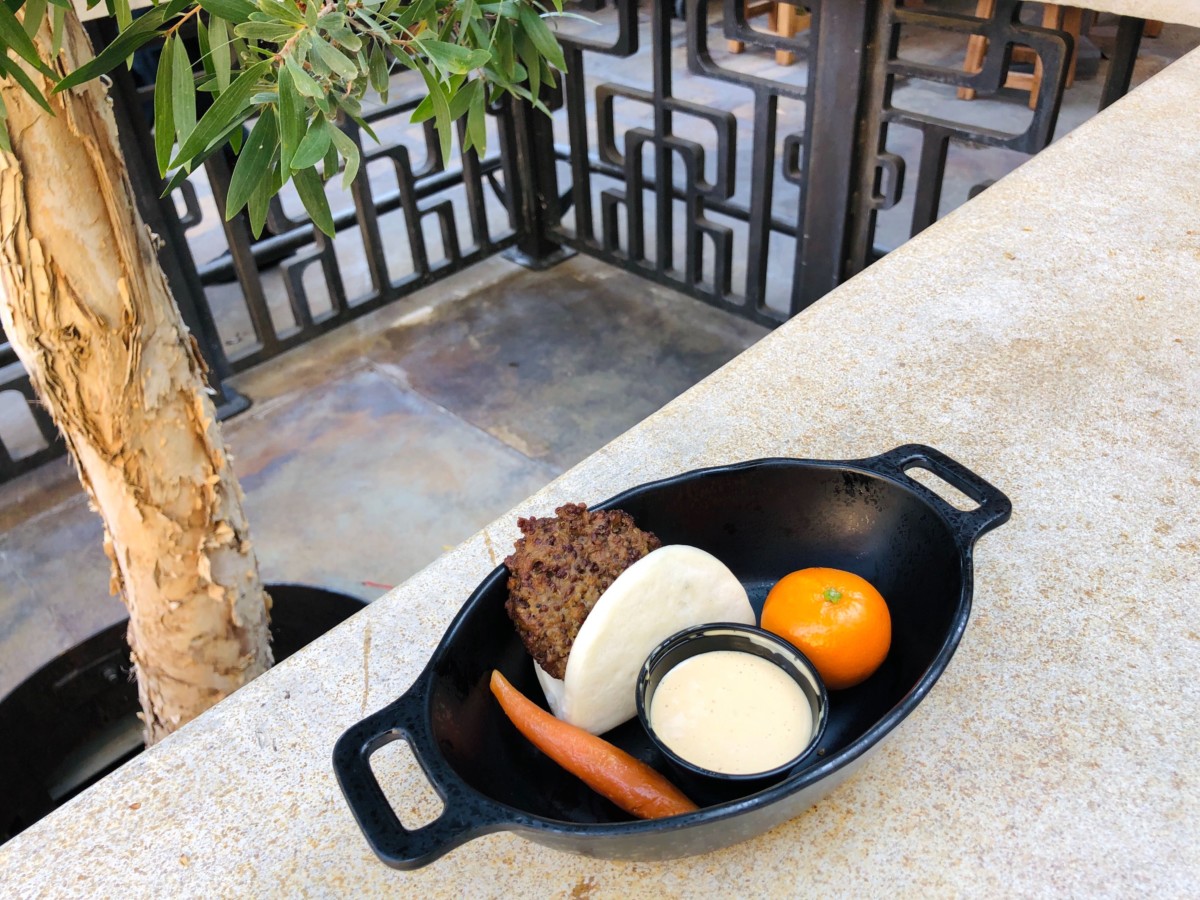 Since everything’s so neatly organized on the dish, this is a great meal (or snack) for the pickiest of eaters. There’s no sauce getting on everything, and you can even take your dessert to go. 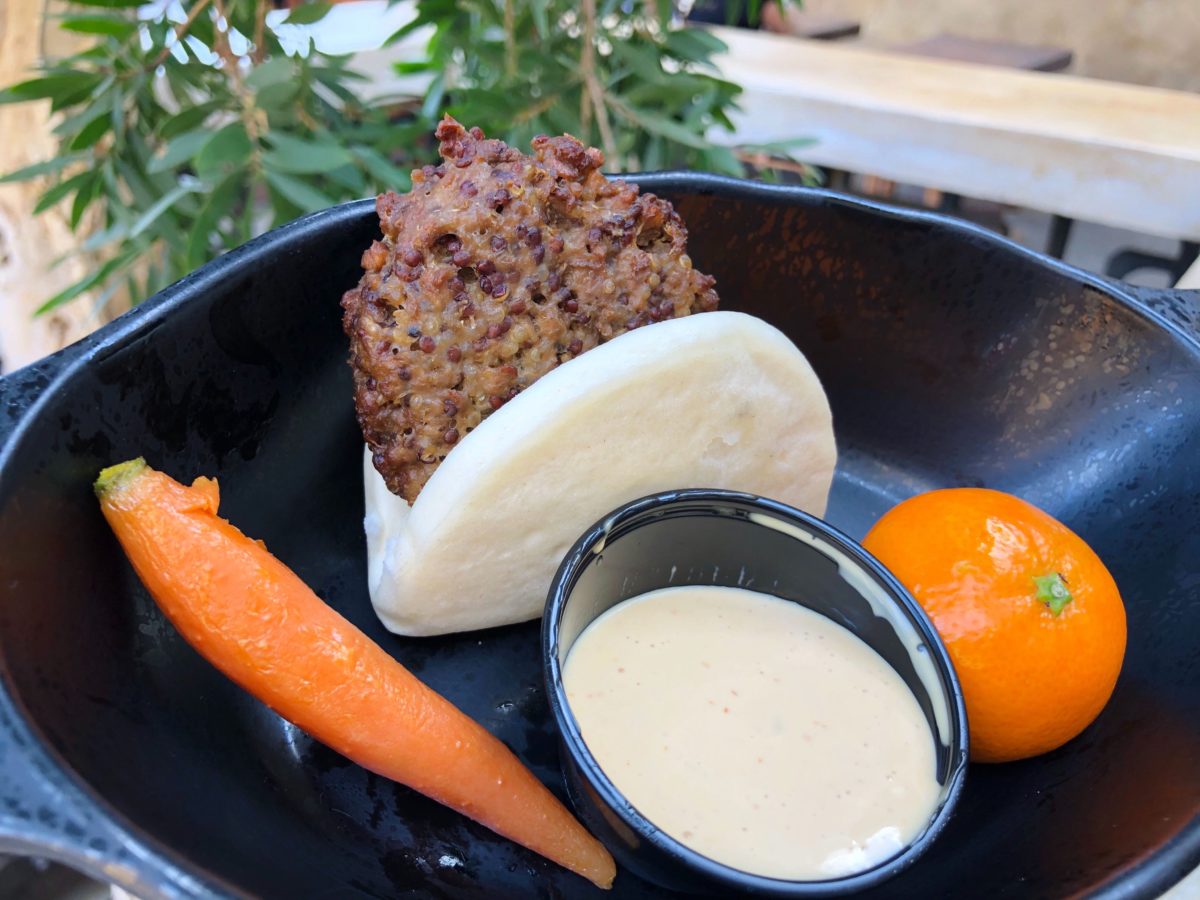 Many will mistake the crunchy bits on the garden patty for nuts, but they’re actually red quinoa! (Which is technically a seed.) We really enjoyed this sandwich. The bao bun was super soft and fluffy with just a tad bit of sweetness, and the garden patty was very savory and juicy. The carrot and orange were pretty straightforward, but overall, they’re good, healthy sides to accompany what’s otherwise just a glorified veggie burger. 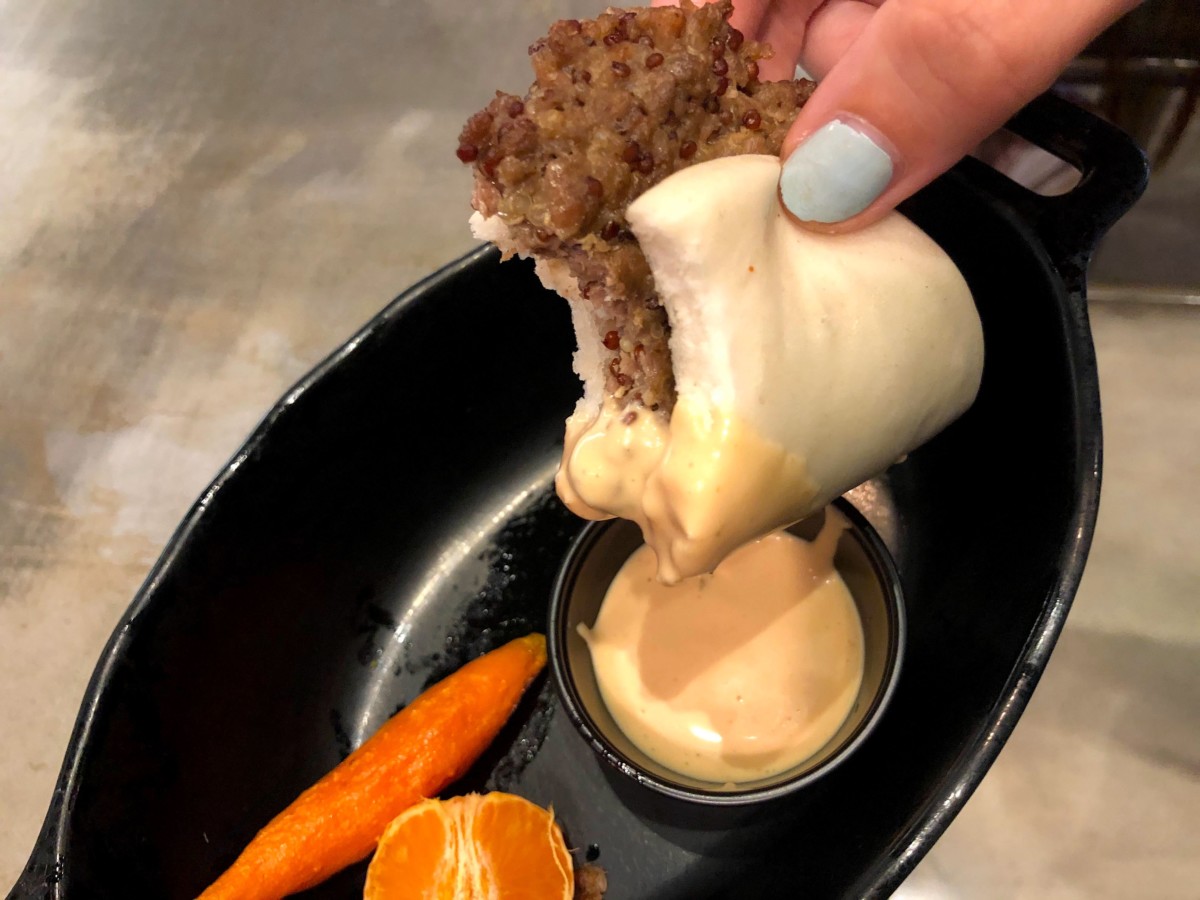 The sauce is where it’s at, though. Dipping the bao bun burger into the sauce made for a real flavor explosion. While described as simply a “house sauce”, it was sweet and slightly spicy, much like the sauce used on the Ronto-less Garden Wrap at Ronto Roasters. Best of all, since it’s served on the side, you can control how saucy things get.

We highly recommend this new offering! Between the Fried Endorian Tip-Yip with mac and cheese and now this, you could say we’re all pretty big fans of kids meals from Docking Bay 7 (yeah, 7.)

If you try this or any other new foods on Galaxy’s Edge, let us know your thoughts in the comments!