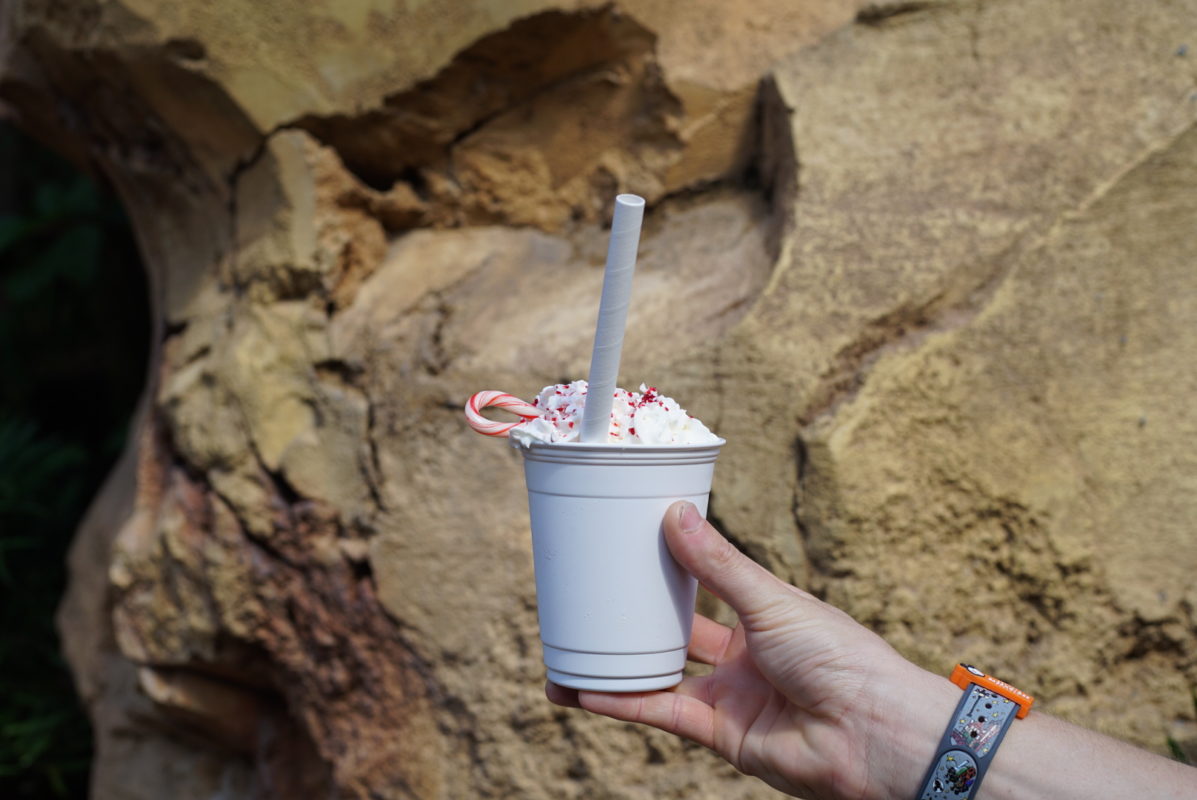 It’s officially the holiday season at Walt Disney World, so that means a barrage of holiday treats for us to taste and review. The latest holiday dessert craze seems to be peppermint everything, especially at Disney’s Animal Kingdom. Of course, we’re going to try them all! Today, we tried the Peppermint Cookies ‘n Cream Milkshake. 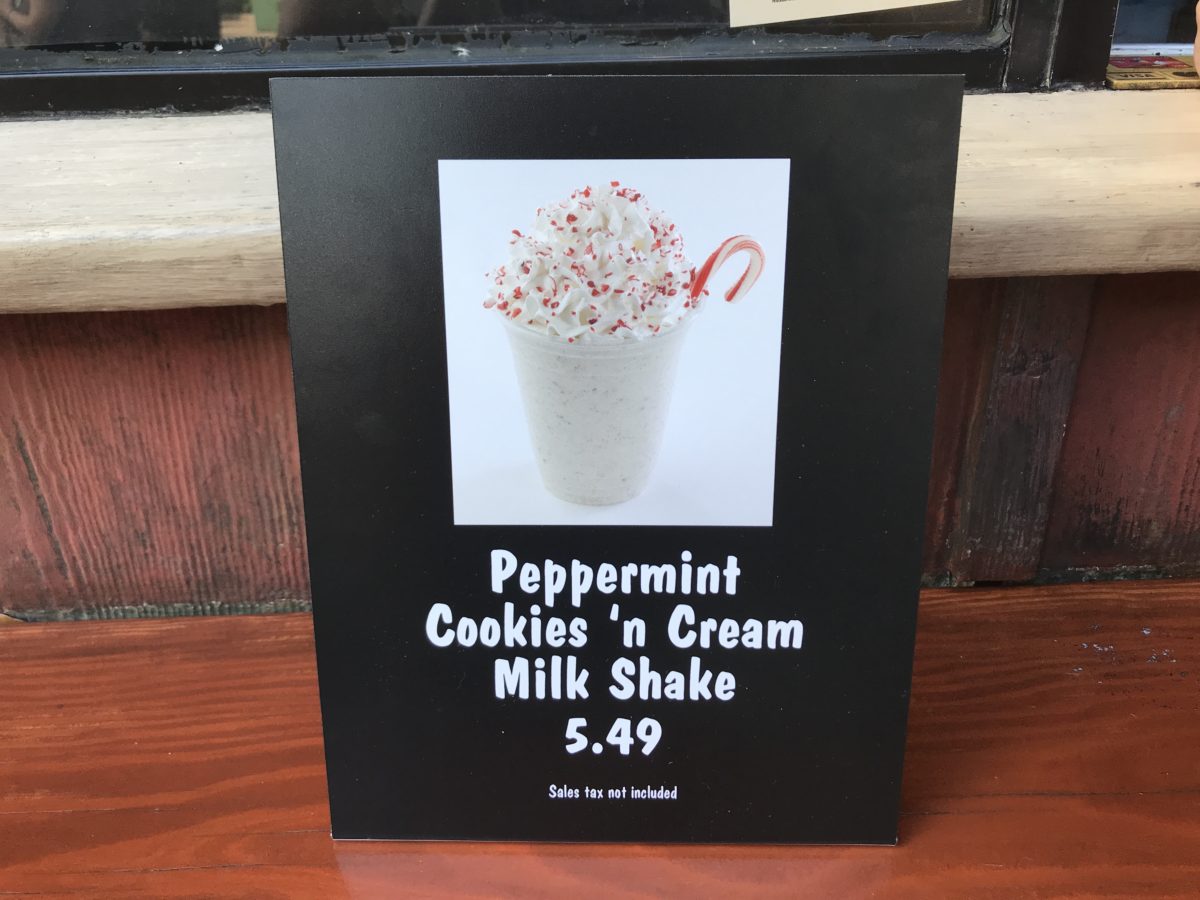 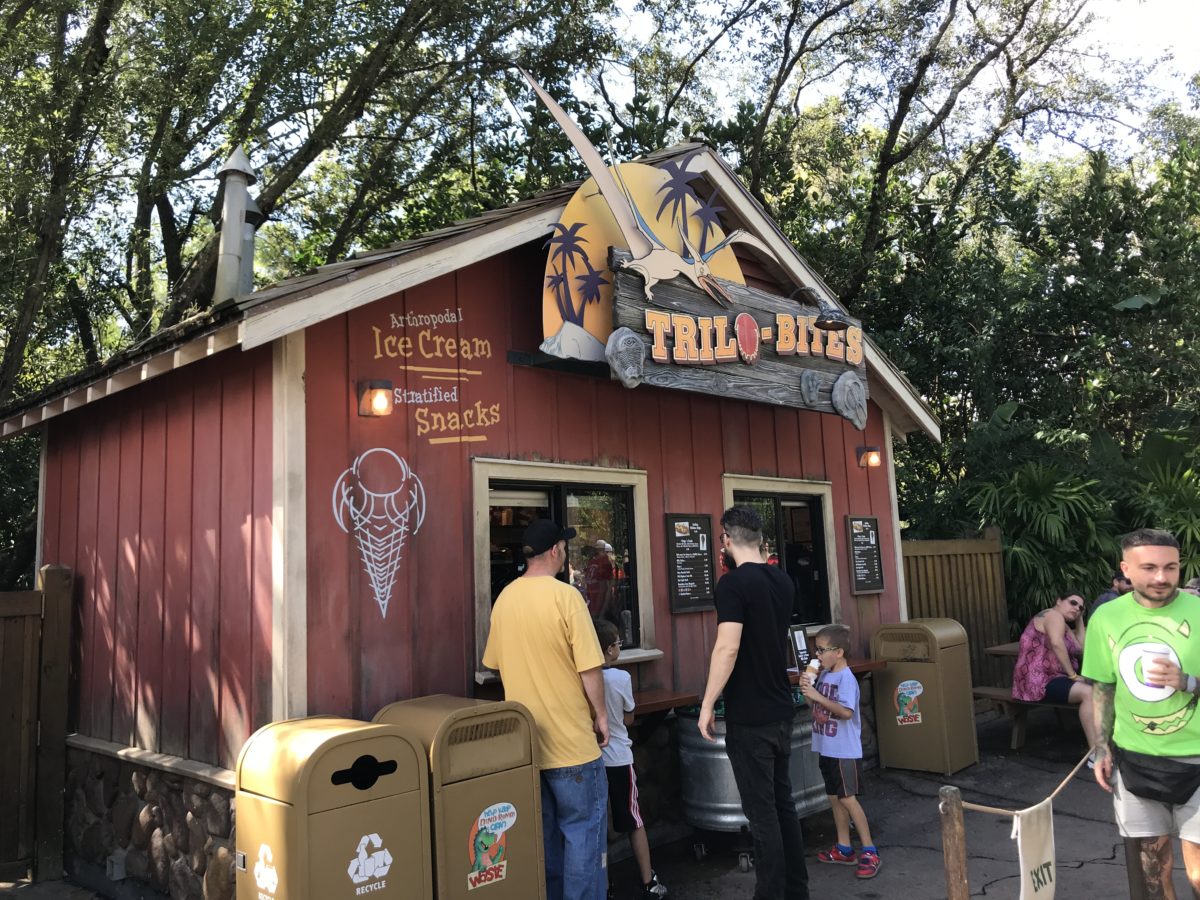 You’ll find this creamy drink at Trilo-Bites in Dinoland U.S.A. This is also the location of the disappointing new Oreo Milkshake, which replaced the epic Smokey Bones Shake. You can read our review on that here. 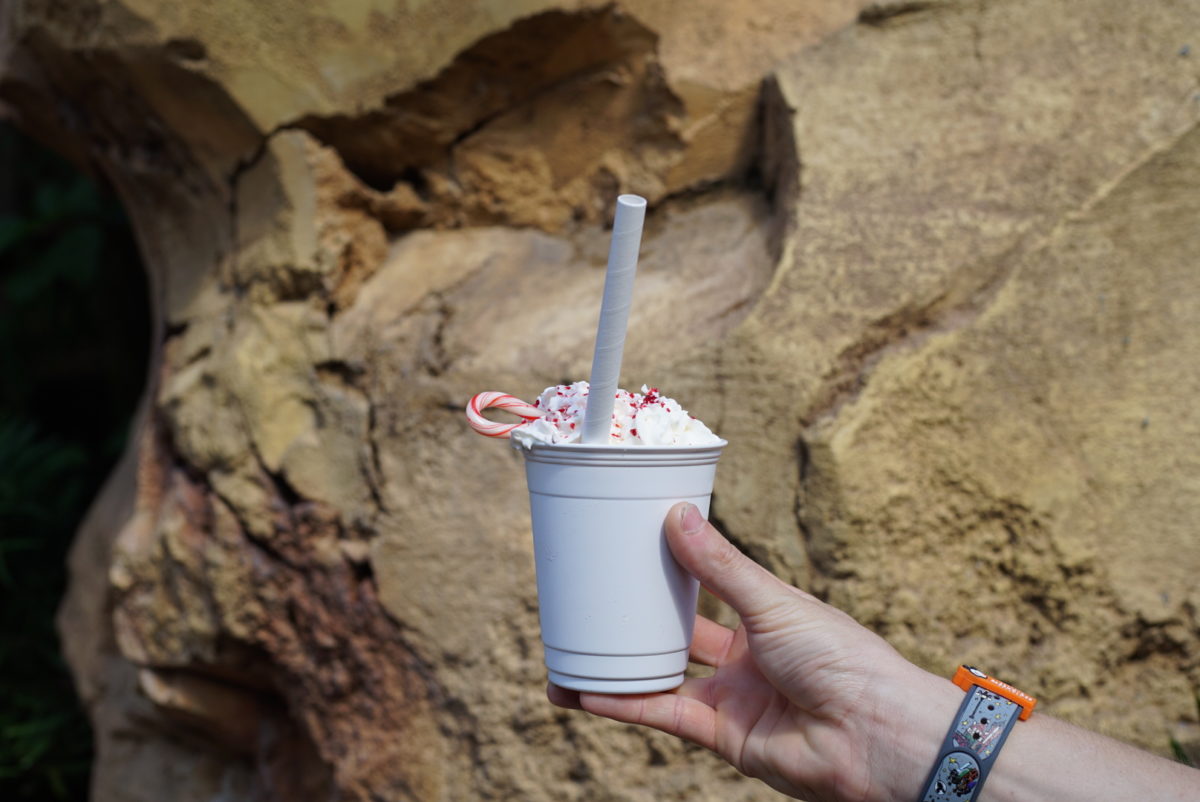 Not that we believe that every dessert needs to have an Instagram-worthy appearance, but this shake looks like a sad, deflated version of what’s pictured on the menu board. The whipped cream was already pretty warm and melting when it was handed to us, so much so that it was a struggle to keep the candy cane garnish in place. 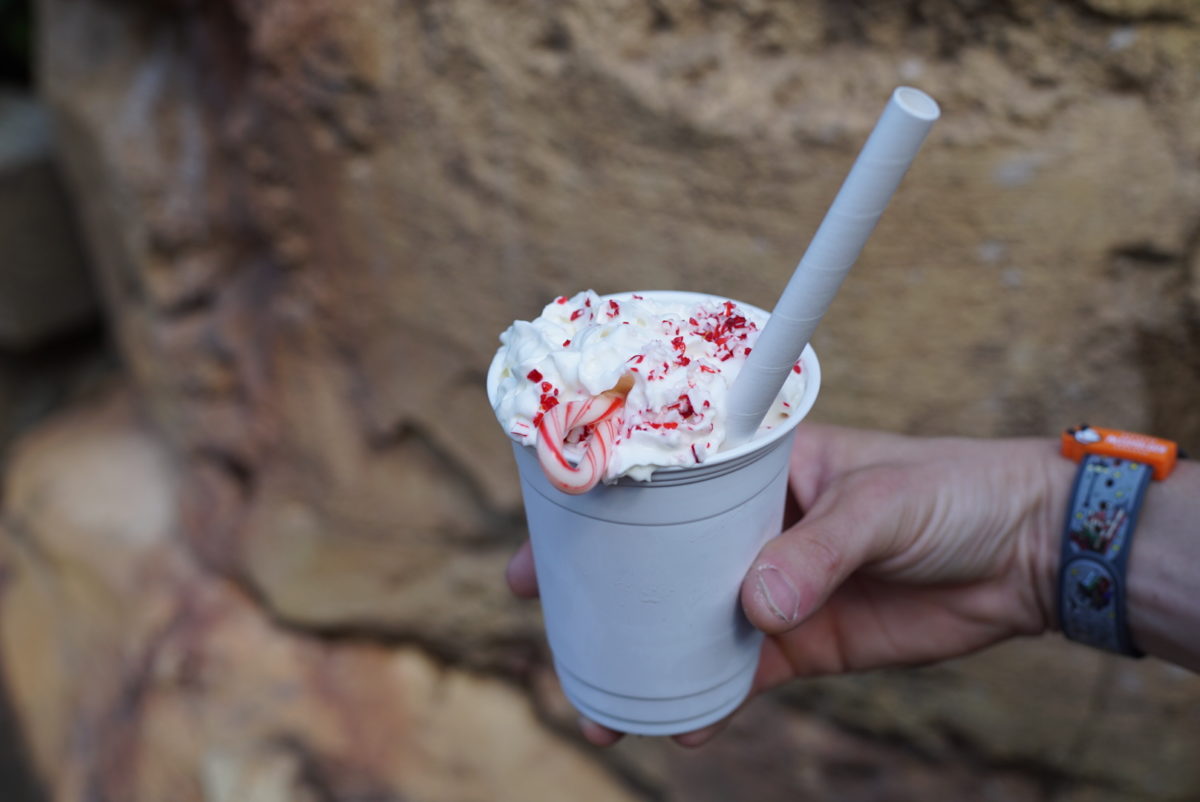 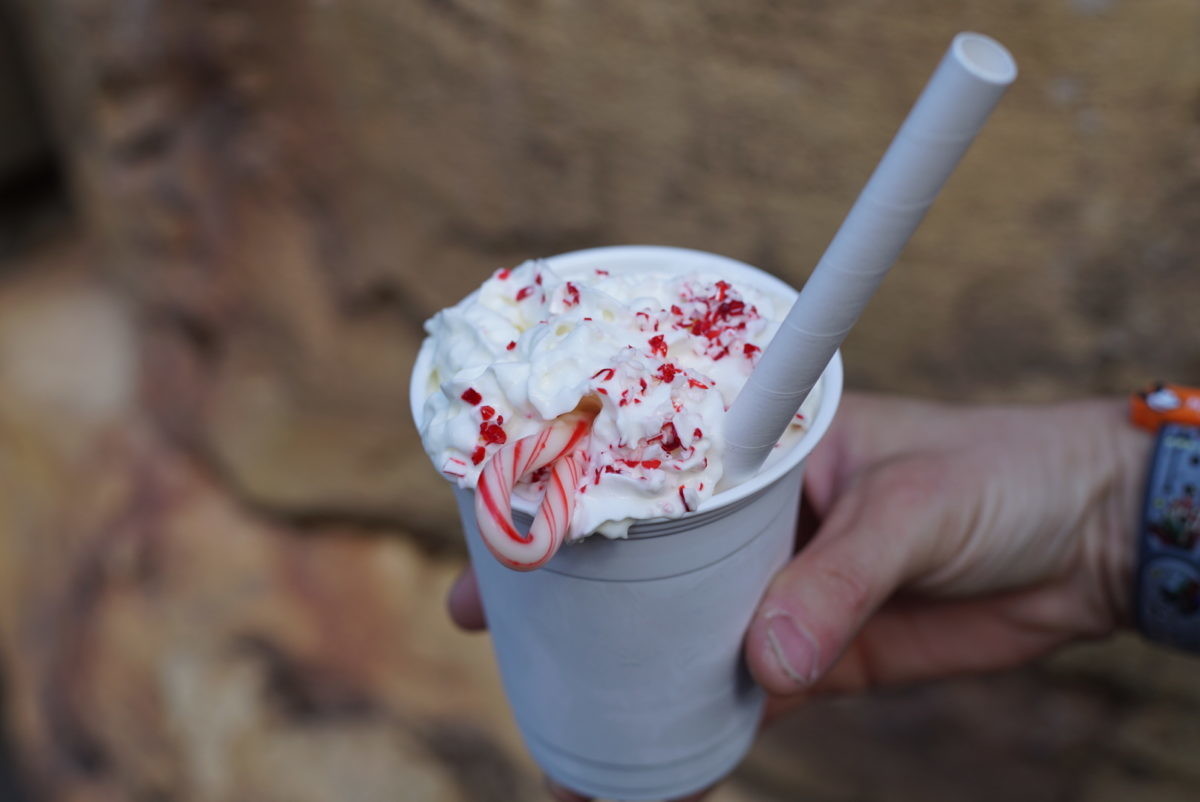 Let’s move past the toppings and get to the actual shake! This is where things get a little iffy. First off, this shake isn’t made with peppermint based soft-serve ice cream, which is disappointing. It’s made with another flavored soft-serve and then our best guess is that a peppermint flavored syrup is added to the shake while its being mixed.

Notice that we didn’t say what flavor soft-serve? This is where we’re confused. The menu board states that it’s made with cookies ‘n cream soft-serve. Well… in our shake, all we tasted was vanilla. If it was cookies ‘n cream soft-serve, it was the most lightly flavored version we’ve ever had. Also, the peppermint syrup wasn’t well blended throughout the shake. After finishing about a third of the shake, all of the peppermint flavor was gone completely.

This was a decent shake. It still tasted pretty good, but it didn’t really live up to what was described on the menu board, so inevitably there was slight disappointment. We think this treat has lots of room for improvement and that using better quality ingredients would make it an irresistible hit. Until those improvements happen, we’ll be giving the Peppermint Cookies ‘n Cream Milkshake a miss next time we’re in Animal Kingdom.