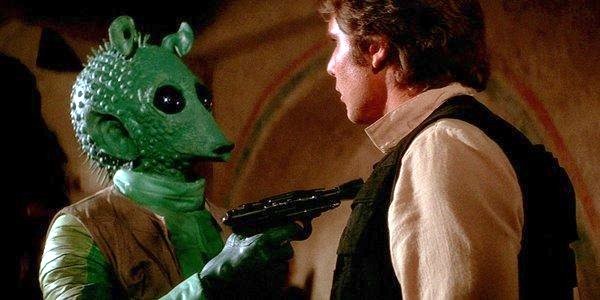 They can’t just leave this scene alone. The classic scene from “Star Wars: A New Hope”, which shows Han Solo and Greedo confronting each other at the Mos Eisley Cantina, has been altered yet again. This time, right before Greedo is shot and killed by Han, he utters some last words in his native language of Rodian. This can all be seen in the latest release of “Star Wars: A New Hope” that is currently streaming on Disney+

Oh my god. This is not a joke. pic.twitter.com/RMkh7Blg7D

George Lucas and Lucasfilm have changed this scene so many times that it’s hard to keep track of all of the changes. In the original theatrical version of “Star Wars”, Han shot first, but ever since the release of the Special Editions of the “Star Wars” Original Trilogy in 1997, that scene has been altered to make sure that there is no doubt in the viewers’ minds that Han Solo is a good guy. Fans were very upset with this change to the Han Solo mythos, and ever since, Lucasfilm has tried to compromise by altering the scene in each home release of the film to make it appear as though both Han and Greedo shoot at the same time. Personally, I think this newest change that is found on the Disney+ version adds nothing to the scene, and if anything, it is just distracting towards the outcome.

However, there is some very good news for Star Wars fans. These versions of the Star Wars Saga found on Disney+ are completely brand new 4K transfers. Star Wars Visual Comparisons has confirmed that these are the 2011 Blu-ray editions in 4K HDR and are presented in Dolby Vision and Dolby Atmos. The opening 20th Century Fox fanfare has also returned in these versions, which were previously replaced with just the Lucasfilm logo when Disney re-released all of the films digitally in 2015.

So keep your eyes open for any additional changes while watching any of the “Star Wars” movies on Disney+. You never know what you may find!

1 thought on “VIDEO: Greedo Gets The Last Word in a New Change Found In “Star Wars: A New Hope”; New 4K Transfers Of “Star Wars” Films Now Available on Disney+”