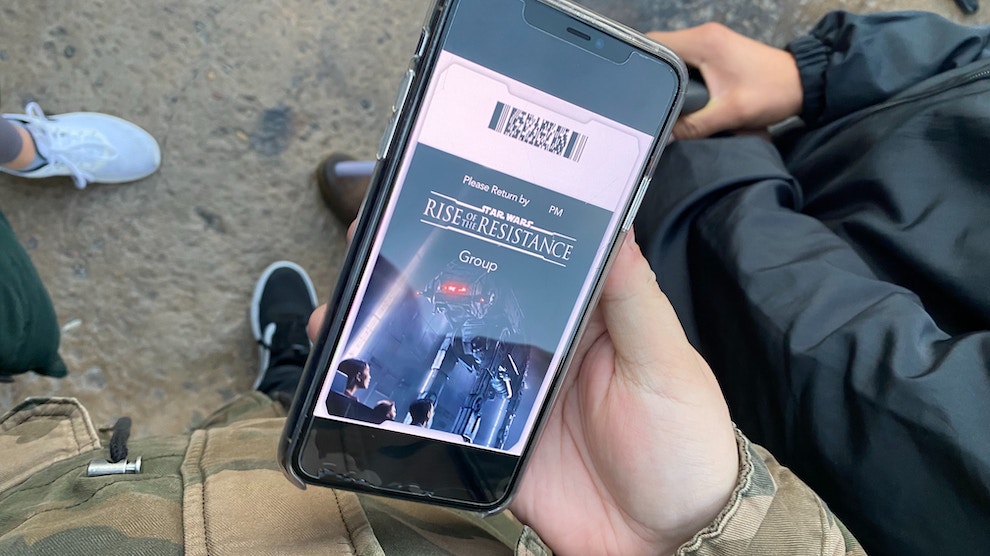 Star Wars: Rise of the Resistance opened today in Disneyland to huge crowds of guests, many of which camped out overnight for a chance to be among the first to ride the new attraction. However, the day has transpired far from smoothly, as the ride has gone down multiple times, and the sheer amount of guests roaming Batuu has led to food shortages across various eateries there. Desperate times call for desperate measures, it seems, as guests have taken to forging Boarding Group passes for access to the attraction. 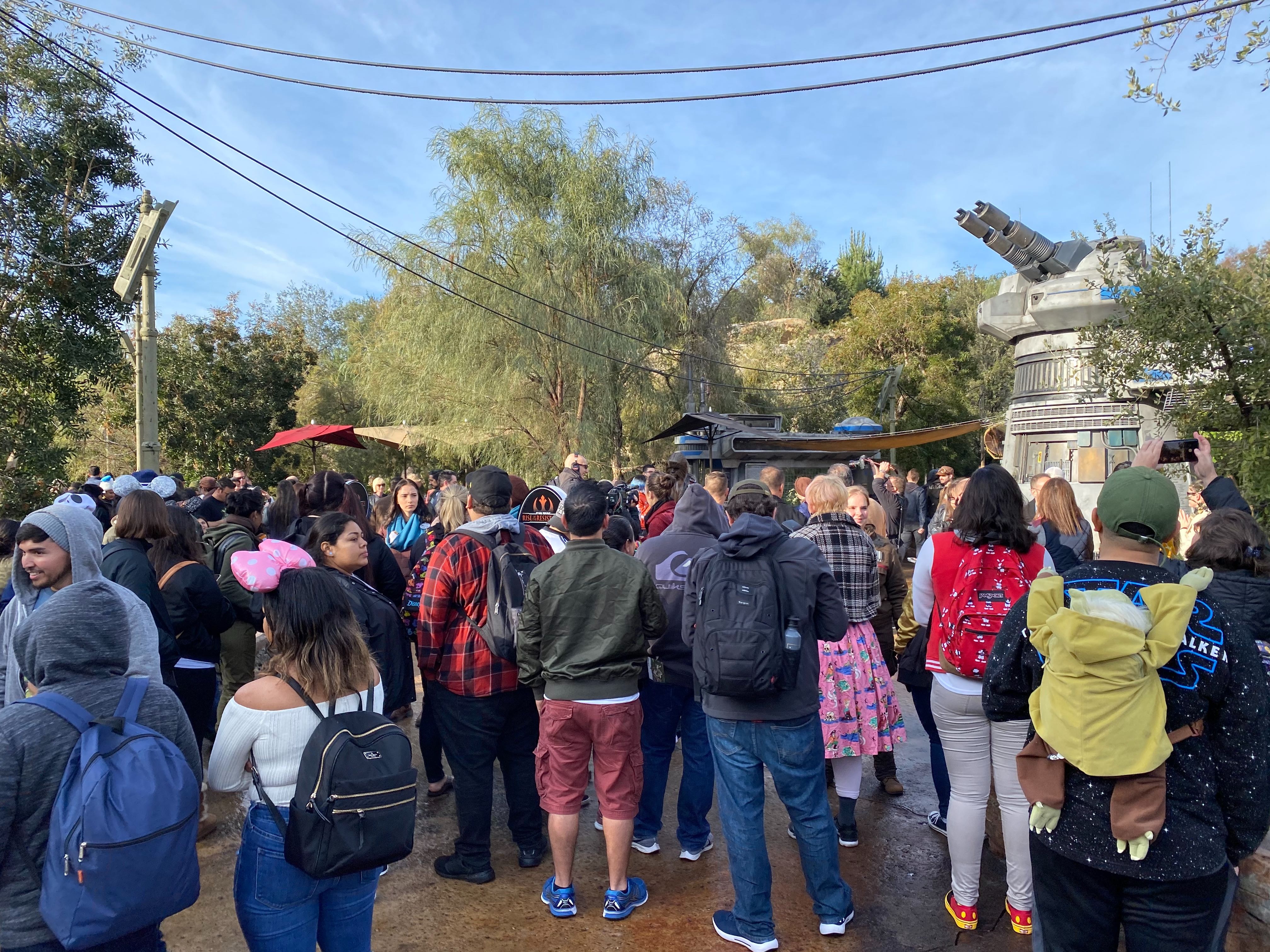 With many people unable to obtain a Boarding Group, or simply frustrated at the long wait due to numerous attraction breakdowns, guests have taken to forging Boarding Groups for themselves or their party. A screenshot (seen above) of a valid Boarding Group return time screen (complete with barcode) was seen circulating amongst guests inside Disneyland, with some guests going as far as to copy the font used on the screen to fill in Boarding Group numbers and exact return times. The premise behind these forged Boarding Groups is that Disneyland is not consistently scanning people’s Boarding Group tickets as they enter the attraction, leading to even more virtual line-cutting from guests.

While this behavior is unbecoming of guests, it’s also unwise for the park to engage in such lax rule enforcement on the day of an attraction grand opening. (Did they learn nothing from the 1970 Yippie Invasion?) With any luck, we’ll see better established practices from both Cast Members and guests in the coming days as attraction opening procedures normalize for Rise of the Resistance.

Sounds like the forged tickets people used to get into Disneyland on its first opening day. History repeats itself!

It may be wrong but if they can out smart Disney….kudos to them.
JUST GO BACK TO 1ST IN FIRST OUT DISNEY!!! For both WDW & DL

Guest
Laughing at you

Okay disney do the right thing and do away with the virtual que, Let the fools stand in line for hours.

Never have I seen such an entitled bunch of people in my entire life.

These star war freaks need to get a freaking life.

Millenials cheating the system to get ahead of honest people with families? I would have never guessed it…

The down votes I received plus the fact that this isnt the first article claiming such. I also doubt that people with families vacationing from places like Europe are not on the up and up on things such as this. Do a little research and you will find articles, blogs and youtube videos of millennials doing this. It’s ok snowflake someday you will grow up and play by the rules.

Every down vote is another millenial just angry that hard working people who you know Work for their stuff calling them out on their crap..this might come as a surprise to you snowflakes but there will be a time when you actually grow up and get out of your parents houses and off their insurance and realize you were all immature. You will grow up and see the generations that come after you will be even worse than your generation. You all grew up with instant gratification at your fingers. AKA smart phones and google. Your generation didnt grow up… Read more »

How is this a “lottery style” system when anyone who is in the park and grabs a boarding pass before they’re gone, gets a boarding pass? A true lottery gives everyone an equal chance.

It’s lottery style because people who came after you can ride hours before you if your phone is even half a second slower to book the boarding group. Disneyland also didn’t get through all the groups yesterday, so some people didn’t even ride with a boarding pass.

But here is how it works, if you are in the virtual que on Monday, and don’t get a boarding pass, you are automatically on the first or second boarding pass the next morning. So, if you are going to be there a few days, then that is how you need to do it right now, if you want to ride the ride.

And if you’re not? It’s not like Disney World where everyone is there for multiple days…

Do you know what number they got to yesterday? Friday they did 12-114 and Saturday 5-114 or 116. Yesterday they started at 12 and didn’t get very far. Today they are really fast

Did Disneyland expect anything different? I see eople enter the stand by lines then cross over to the max pass line all the time! Cast members never double check the fast pass passes like they’re supposed to.

This is really bad. I understand the frustration, but to forge something is so wrong. So because they weren’t getting what they wanted they messed other people up. A ride as complex as ROTR, people who want to be there opening day need to know it will have issues. Complex rides do and it takes time to shake them out. It happened at WDW. Poor behavior and cheating because there are ride complications is no excuse. Cast Members and staff do their best and some guests just ruin it for everyone. Just like those who stole stuff or bought a… Read more »

Well, we all know that the Cast Members should have been scanning bar codes. However, those found to be laxidazucal about their job should be sent home, and those with fake passes should be banned from the park for a month.

This shows absolutely no proof that this is happening. The photo could be photoshopped for this article. Perhaps show multiple people with it on their phones. Plus, this is not being reported anywhere else.

Yeah, well when everyone else only goes to media events and doesn’t go to the parks on opening days to show you what actually happens, it turns out they have no idea what’s happening to regular park guests.

I agree with you that this is a fake story. But people believe anything nowadays.

We have been on the ride twice – both times a cast member first visually confirmed our boarding pass, and later in the line they were scanning every pass.

When did they open the queue? Did you have to physically be inside the gate in Disneyland to access the virtual queue?

Vote Up1Vote Down  Reply
PHOTOS: Every Piece of Lunar New Year 2020 Merchandise (with Prices) at Disney California Adventure
REVIEW: Braised Boldness and Sensational Sweets at Cuisine Classique for the 2020 EPCOT International Festival of the Arts
Comment