In celebration of Space Mountain’s 45th anniversary, Disney is rolling out a lot of new Tomorrowland merch. Today, we saw the newest items appear: tech accessories and t-shirts that will show your affinity for the land of tomorrow. 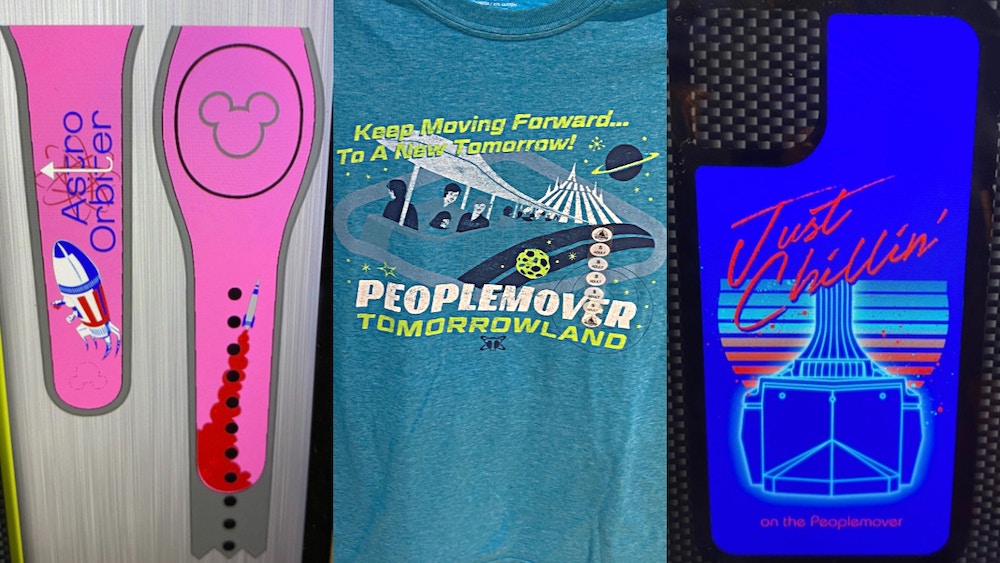 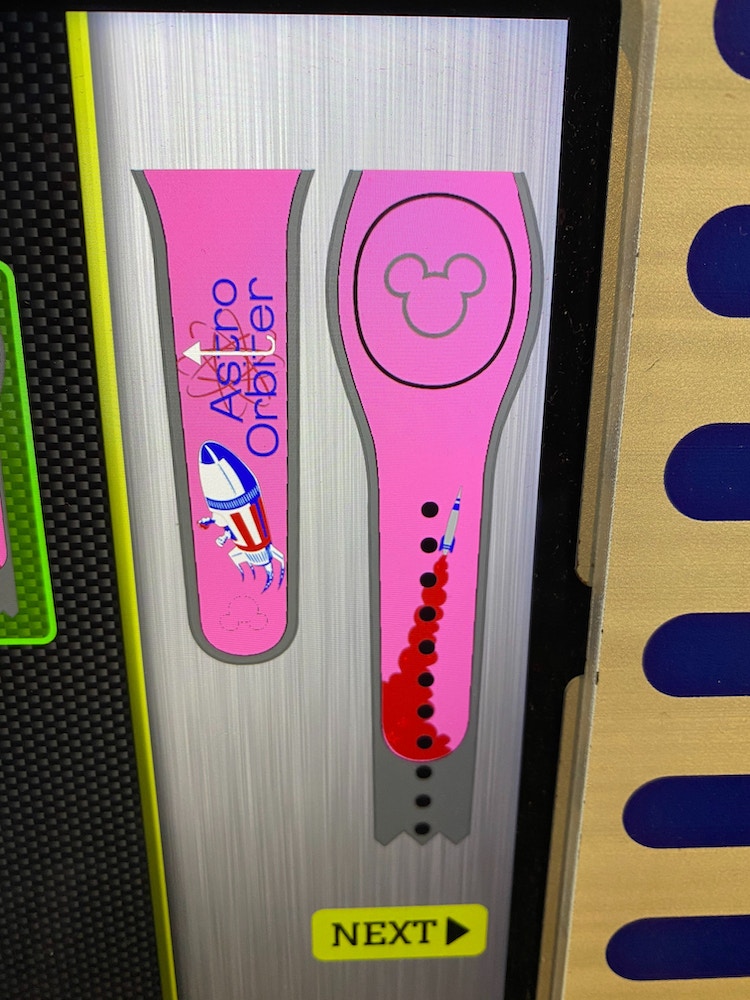 This new customizable MagicBand features the dizzying Astro Orbiter and comes in a variety of colors. You’ll find it at the Tomorrowland Light & Power Co. D-Tech On Demand kiosks at Magic Kingdom. 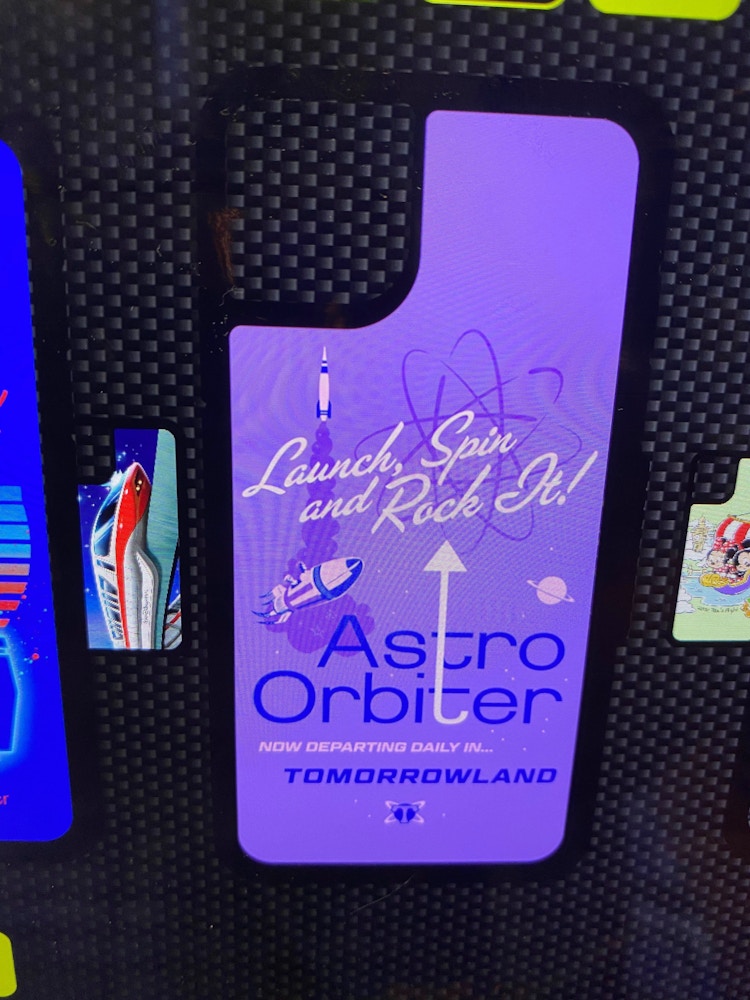 The Astro Orbiter can also be featured on your phone case. It says “Launch, Spin and Rock It,” and shows the rockets blasting off. You can get this and other D-Tech On Demand phone cases personalized for an additional $5.

Like the MagicBand, we found the case at Tomorrowland Light & Power Co. 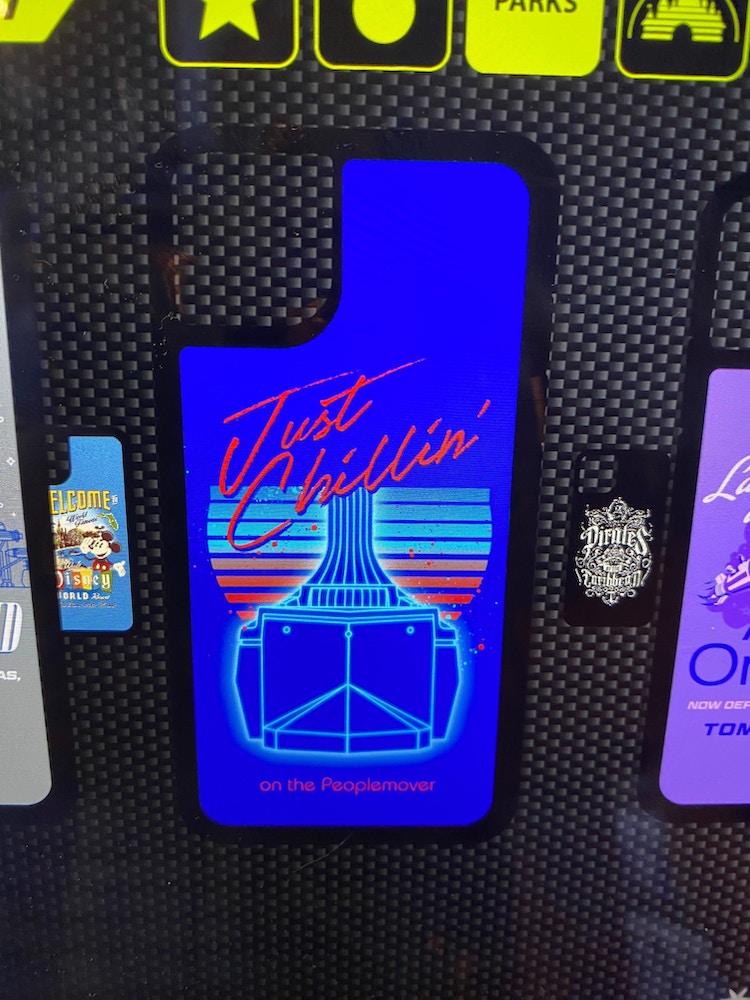 Also at the Tomorrowland Light & Power Co. kiosk, your phone can now reflect the best part of the Tomorrowland Transit Authority PeopleMover: just chillin.’ A retro sunset is in the background. 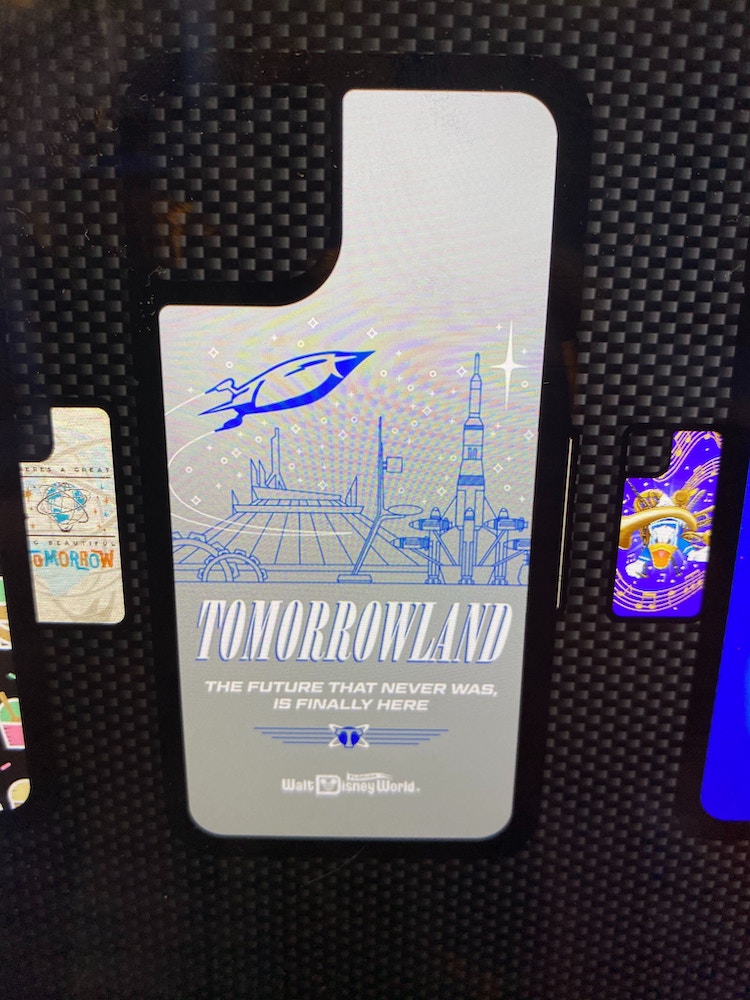 A scene of a few popular attractions is shown on the final Tomorrowland D-Tech On Demand item at Tomorrowland Light & Power Co. Here, we see the gears of Walt Disney’s Carousel of Progress, the Astro Orbiter and Space Mountain.

Much of it has used pastel and sparkling coloring, so we were glad when we saw these new casual t-shirt options. 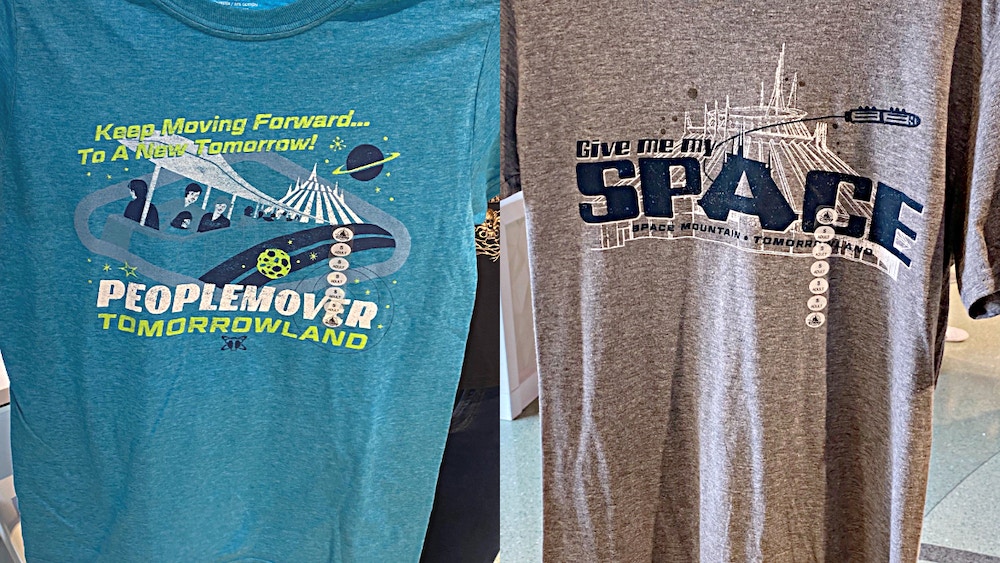 There are two new unisex t-shirts for Tomorrowland. One focuses the PeopleMover and the other features the “Give Me My Space” quote we’ve seen on other recent Space Mountain apparel. 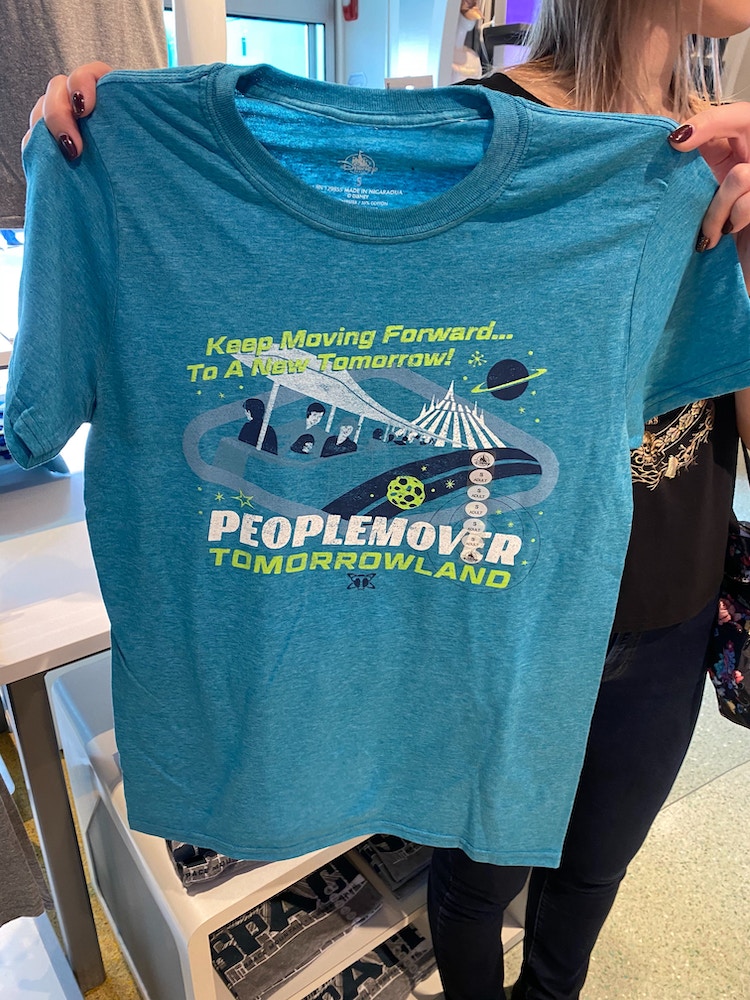 The Tomorrowland Transit Authority PeopleMover t-shirt has the blues and white we know from the attraction vehicles and track. Space Mountain appears in the background, and we’re encouraged to jump on the PeopleMover to keep moving forward to a new tomorrow. 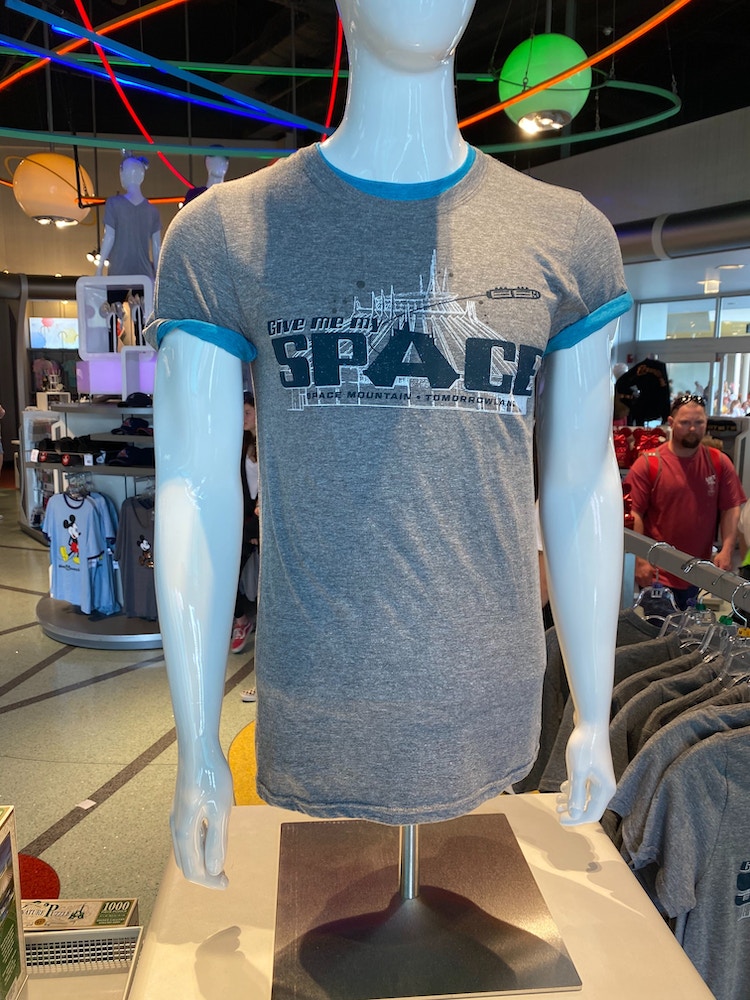 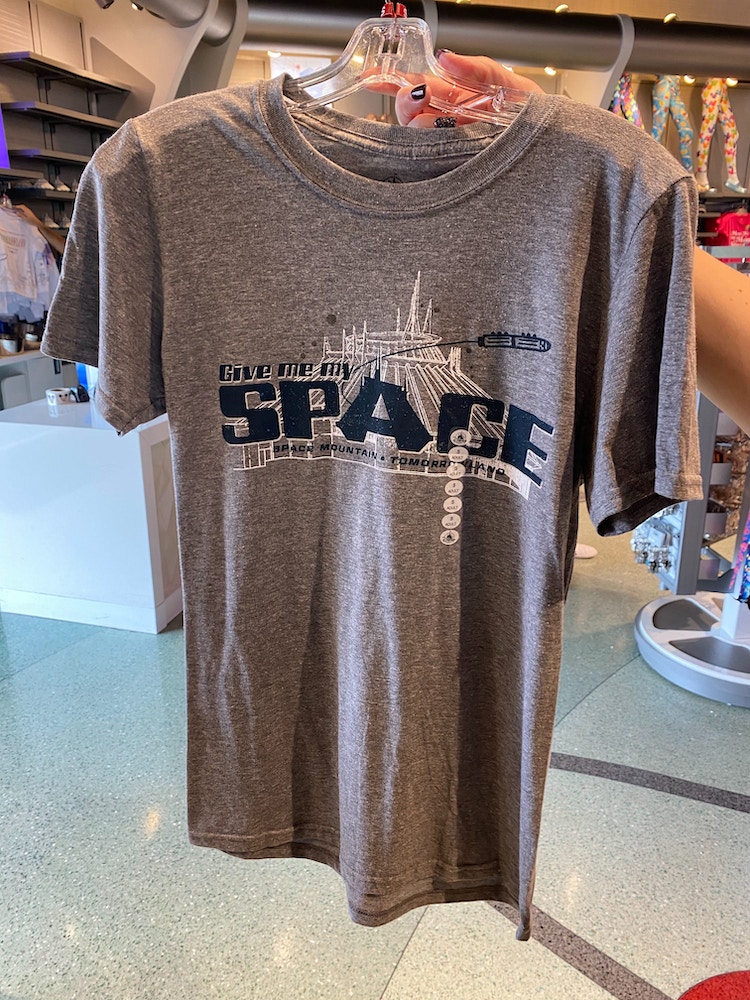 The second unisex t-shirt is a much more subtle gray, with a white and navy screenprint. When wearing it, hopefully the thick Disney crowds will read your t-shirt and know you need some personal space. 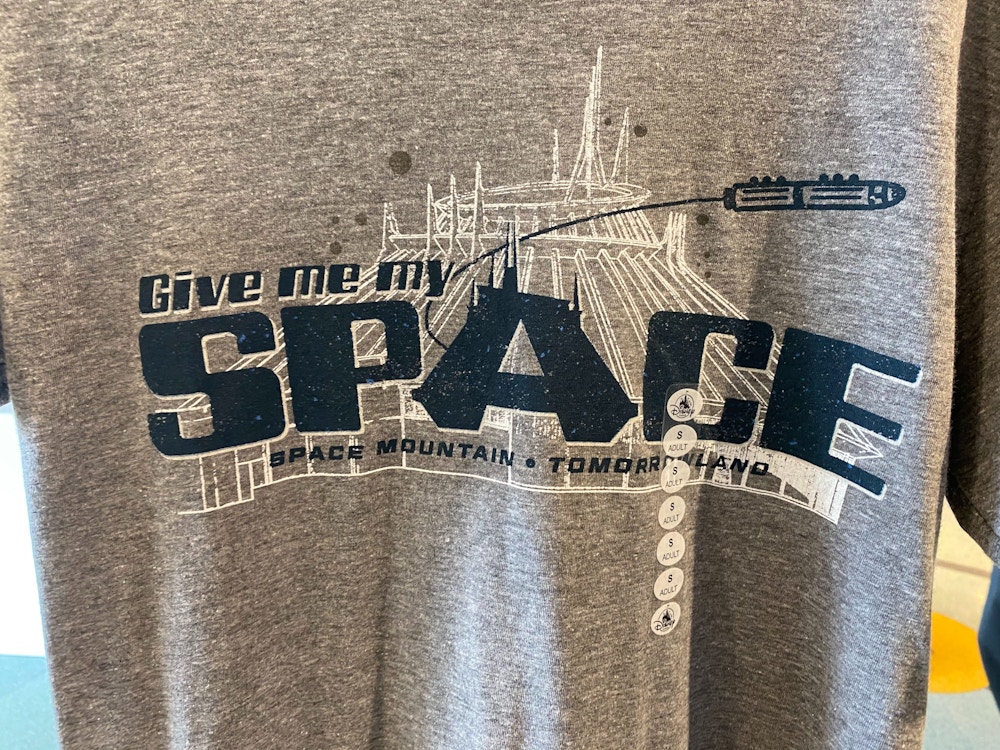 The ride vehicle rocket is seen shooting from the “A,” which resembles the Space Mountain attraction building.

Both shirts can be found at Star Traders in the Magic Kingdom.

Which Tomorrowland items will you pick to show off your favorite attraction: the phone cases, MagicBand or t-shirt? Let us know your choice in the comments.