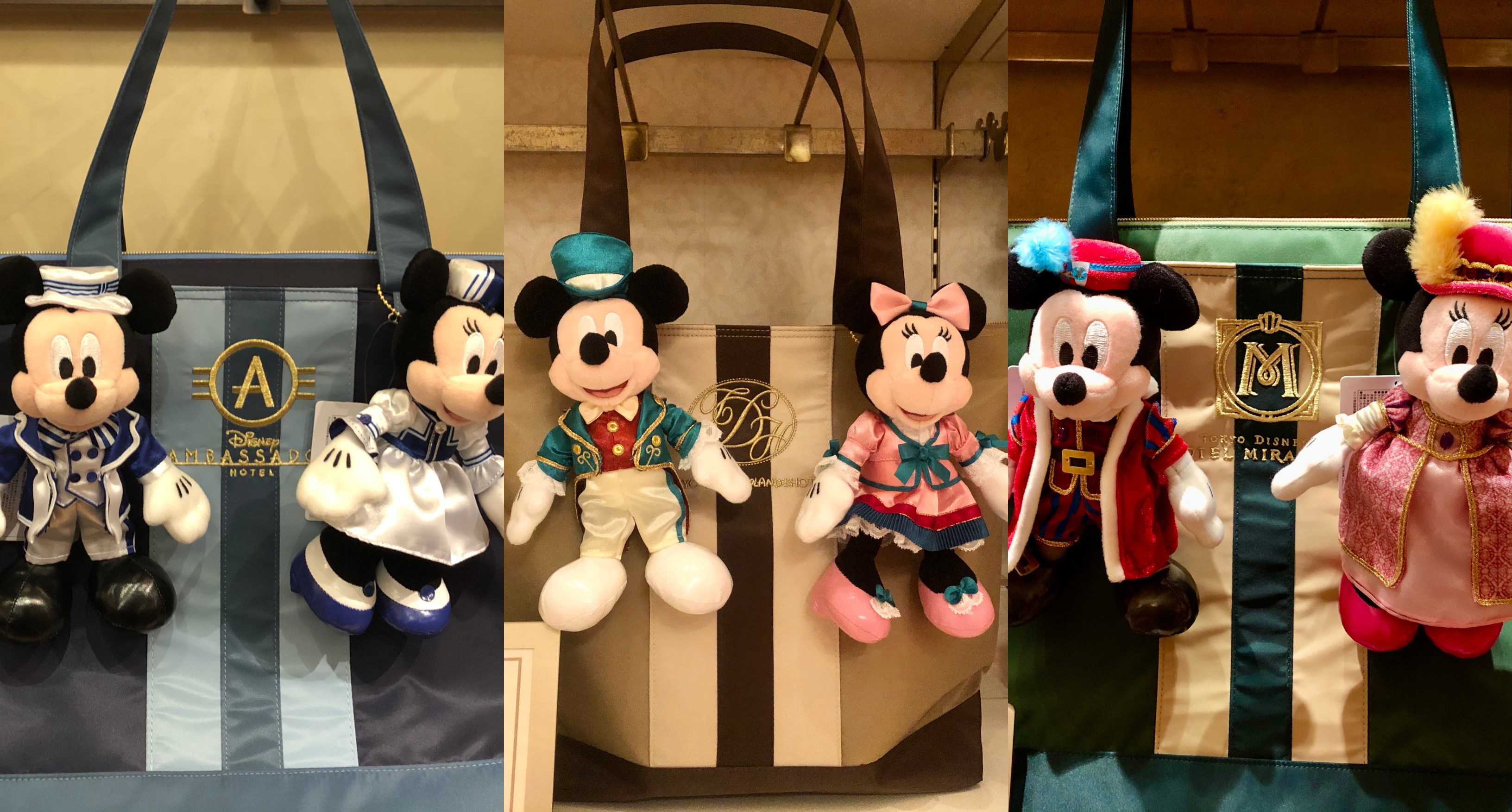 If you’re lucky enough to visit Tokyo Disney Resort and stay in a Disney Hotel, there’s special merchandise you can purchase!

Up to this point, the Guest-exclusive product has been a set of two themed full-size Mickey and Minnie plushes. But as of January 14, the hotels are transitioning to a new line. From now on, instead of paying ¥10,000 ($90.96) for a plush, guests at Tokyo Disney Resort Hotels can pay the same price for a tote bag and two stuffed badges. So, we went down to the official TDR hotels to get a peek!

Every hotel now has its own special tote bag (with an embroidered logo and special interior), as well as two themed stuffed badges. Each Mickey and Minnie is unique to their respective hotel. 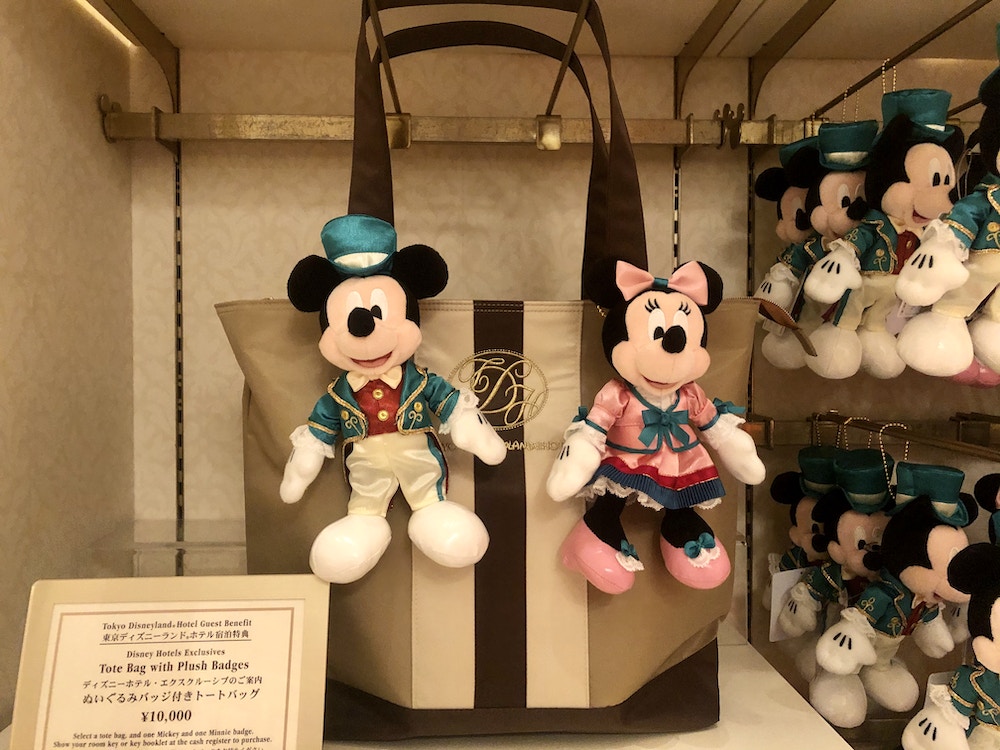 The Tokyo Disneyland Hotel is themed to early 20th century Victorian architecture. Since the hotel was built 25 years after its namesake park, it reflects the themes of World Bazaar and the Disney Resort Line station right in front of it. As such, the character outfits reflect those themes. 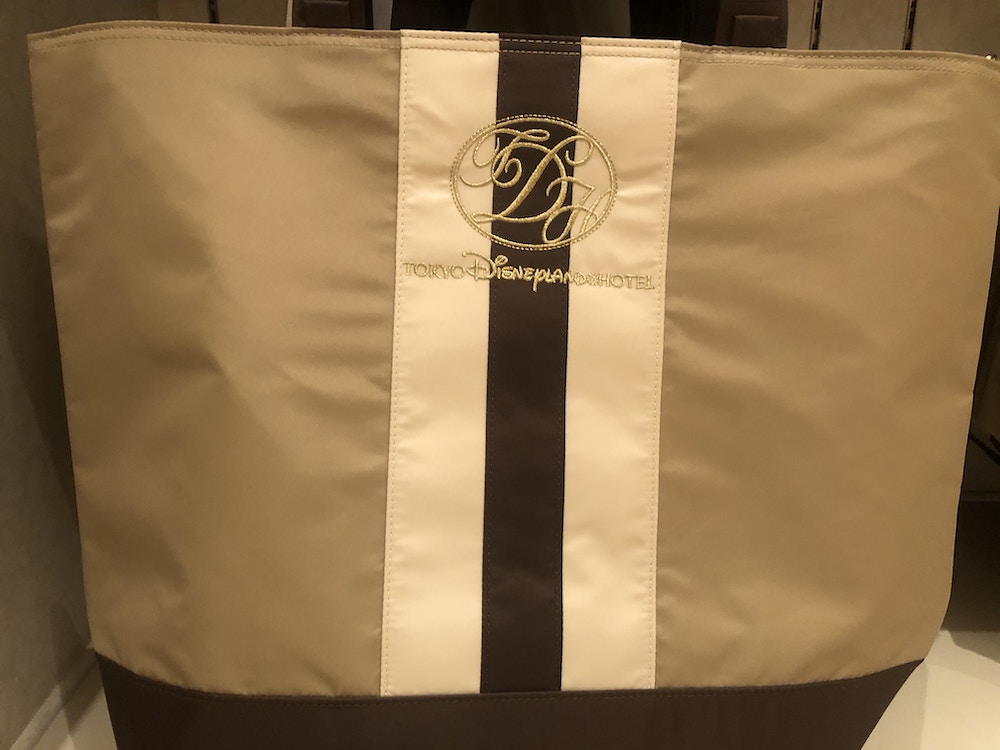 Unfortunately, the bag itself is rather bland on the outside, with more neutral browns and whites. 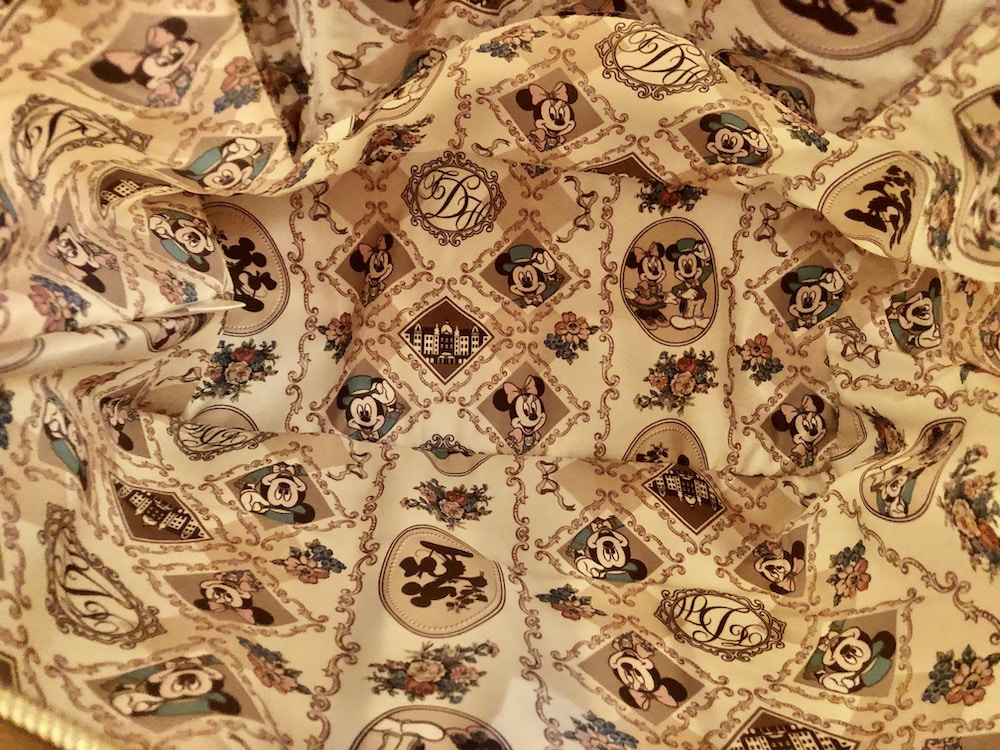 Fortunately, the interior more than makes up for the bland exterior. Featuring art of Mickey and Minnie in their Tokyo Disneyland Hotel outfits, the art fits the Victorian theme of this hotel. I wish this was easier to show off on the outside, because the interior is really where this bag shines. 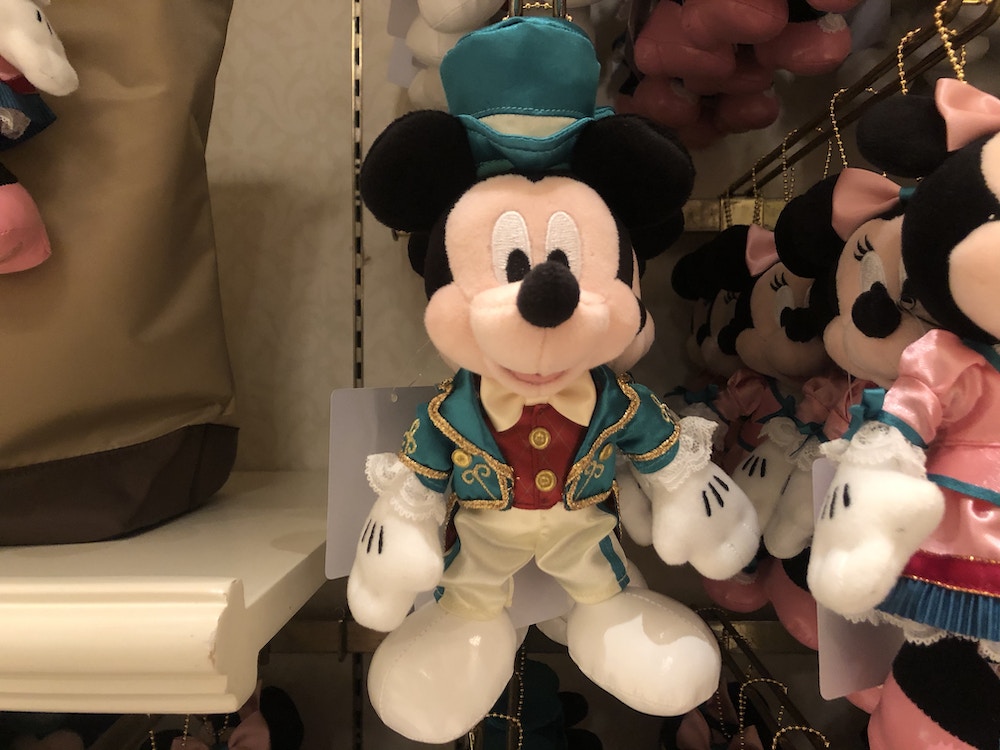 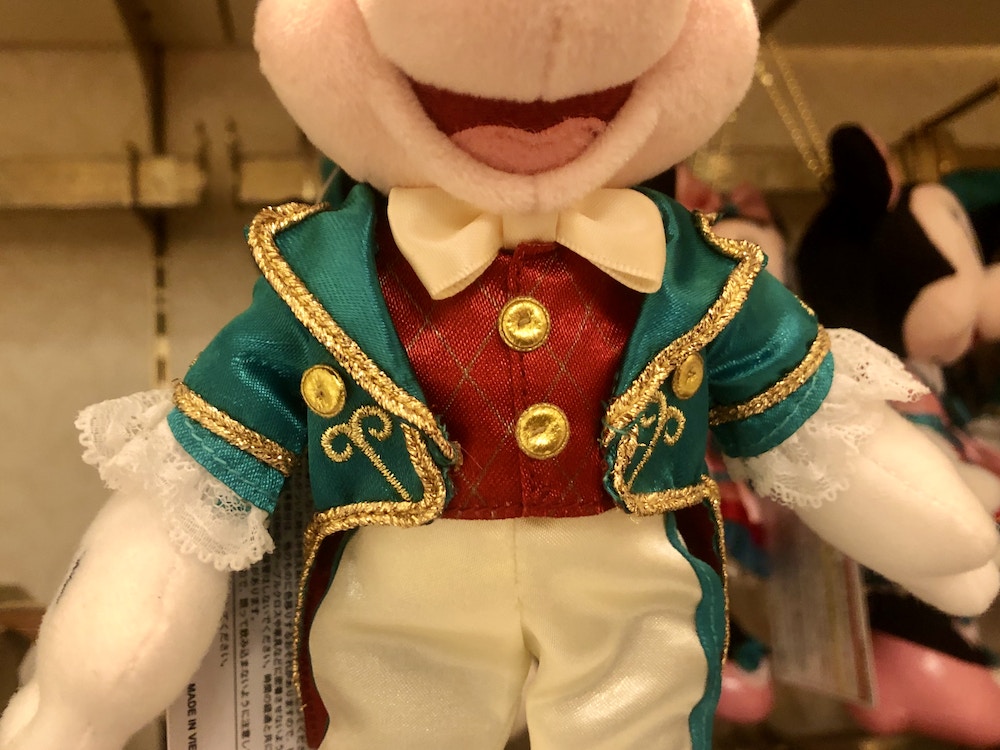 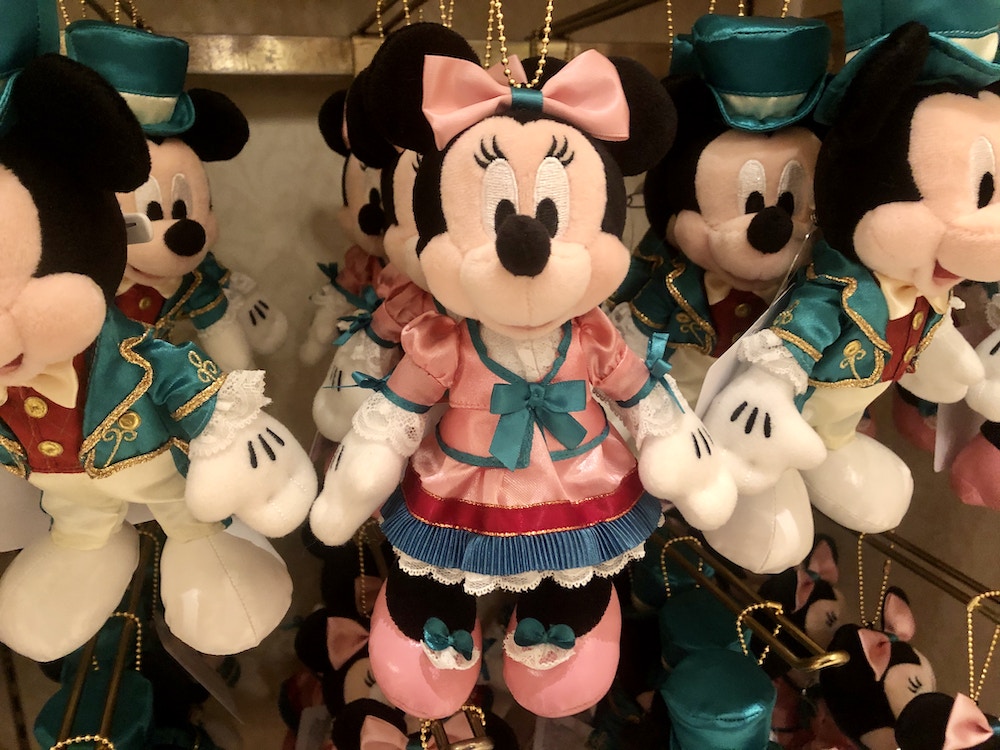 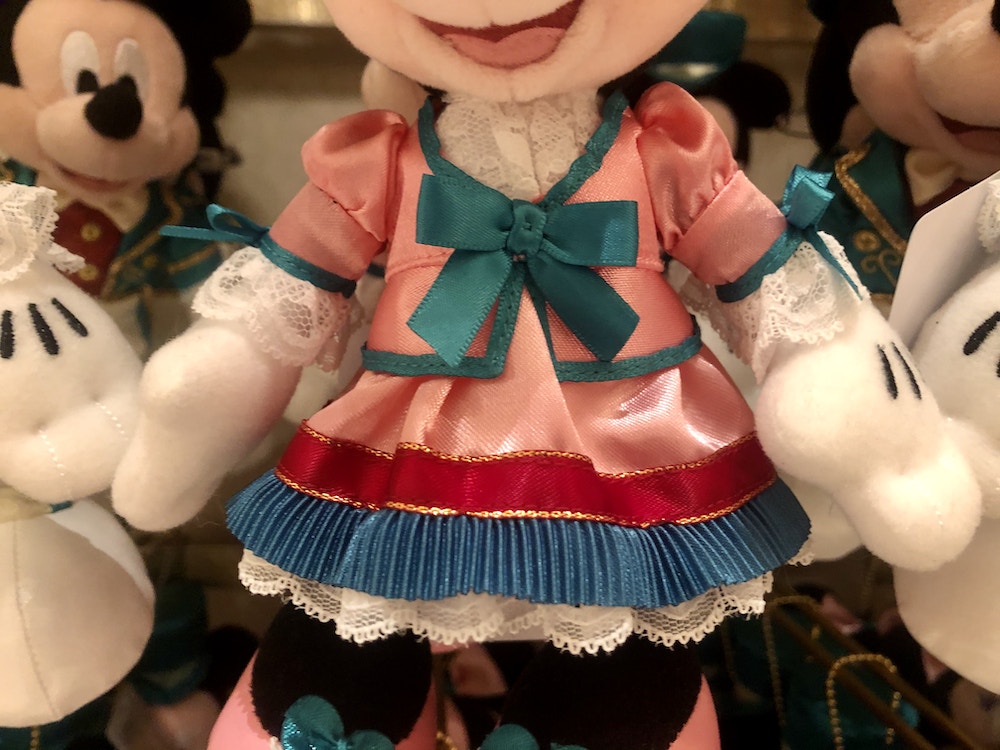 Both Mickey and Minnie are featured in their TDL Hotel Victorian outfits. These can be strapped to the tote bag or hung from a bag like other stuffed badges. 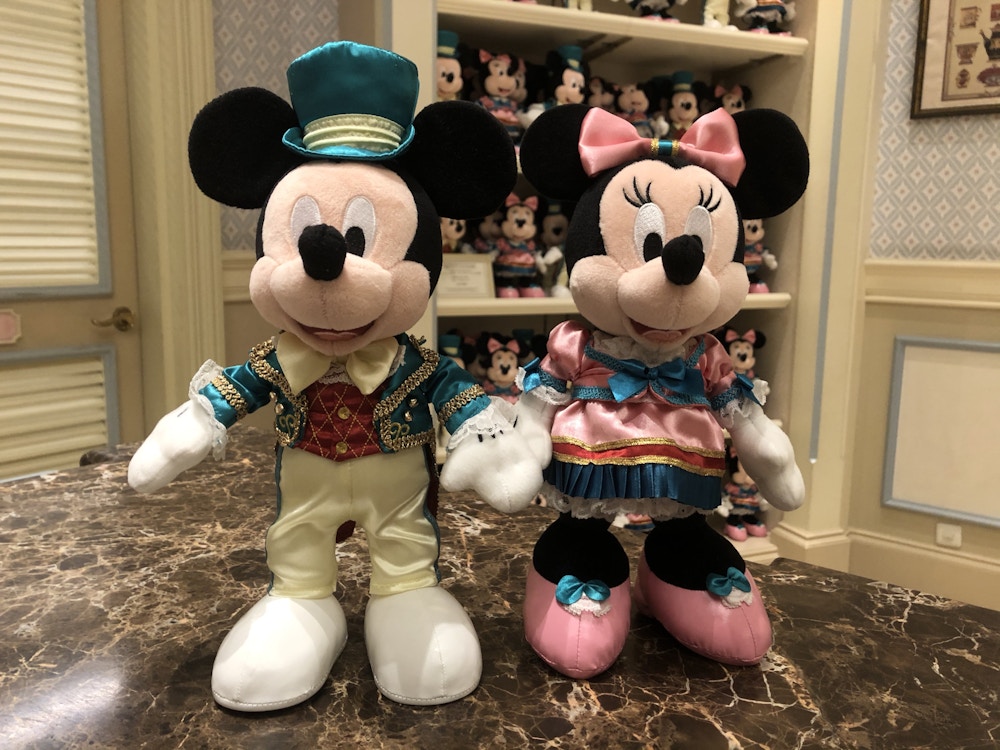 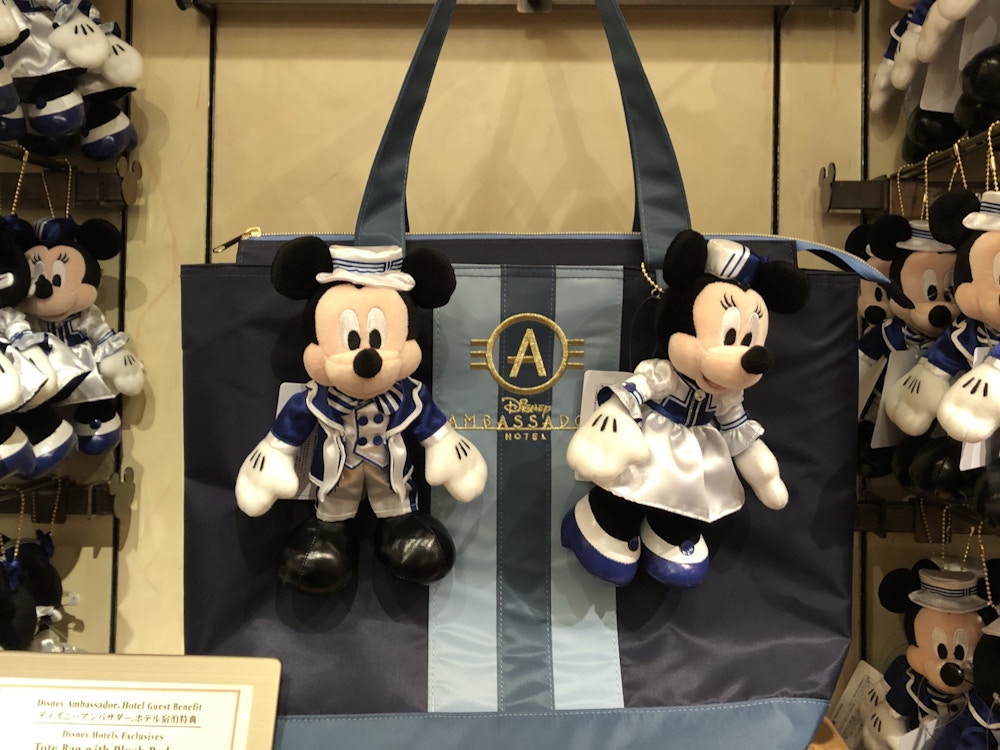 The Disney Ambassador Hotel features Art Deco motifs of the 1920s and 1930s. Since a fair amount of the hotel relies on blues and whites (particularly the exterior), Mickey and Minnie’s outfits feature the same motif. 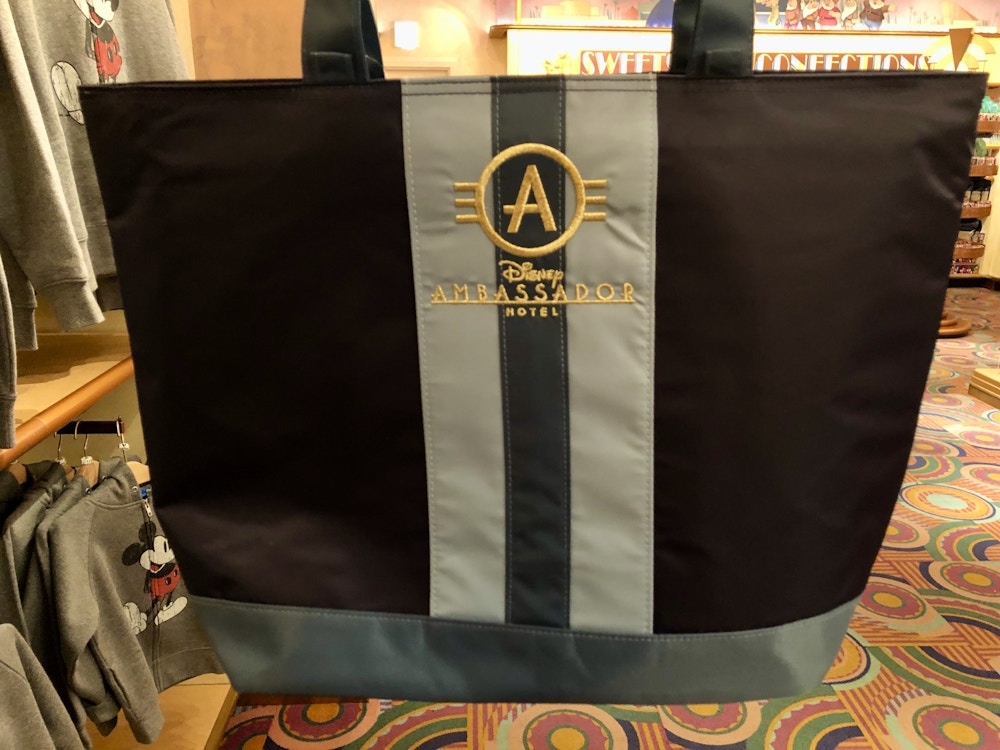 This bag has a lot of blue tones, from dark to very light. The darker end is so dark, actually, that it looks black in this shot. 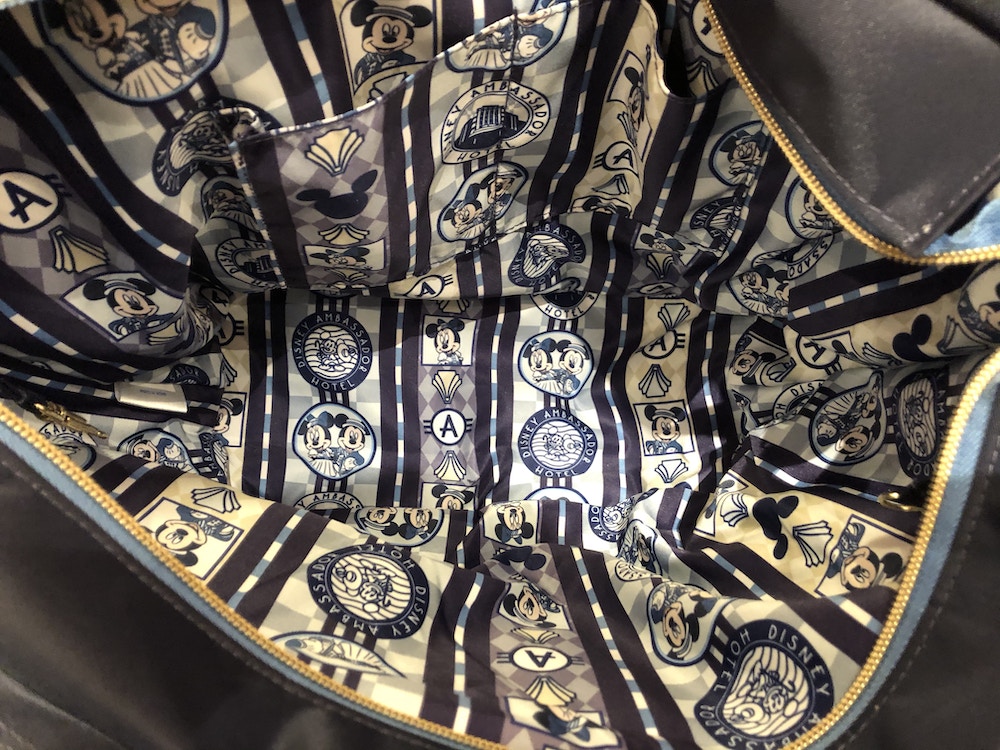 The inside also relies heavily on the blue and white color scheme. Like the TDL Hotel bag, this one features logos, Mickey, Minnie and hotel motifs. 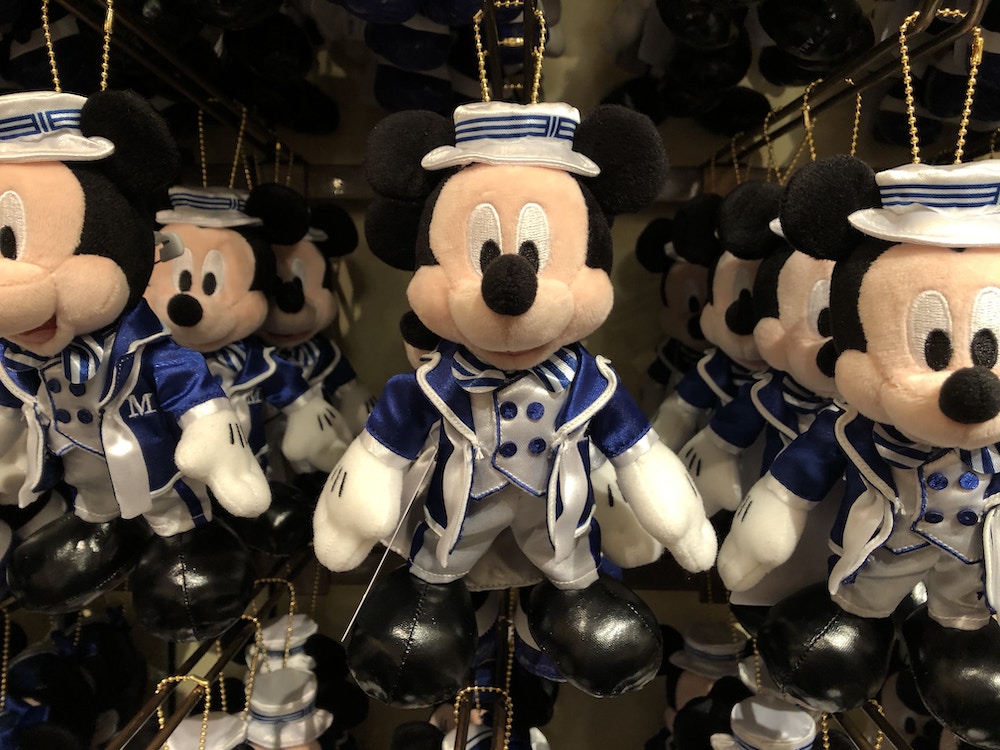 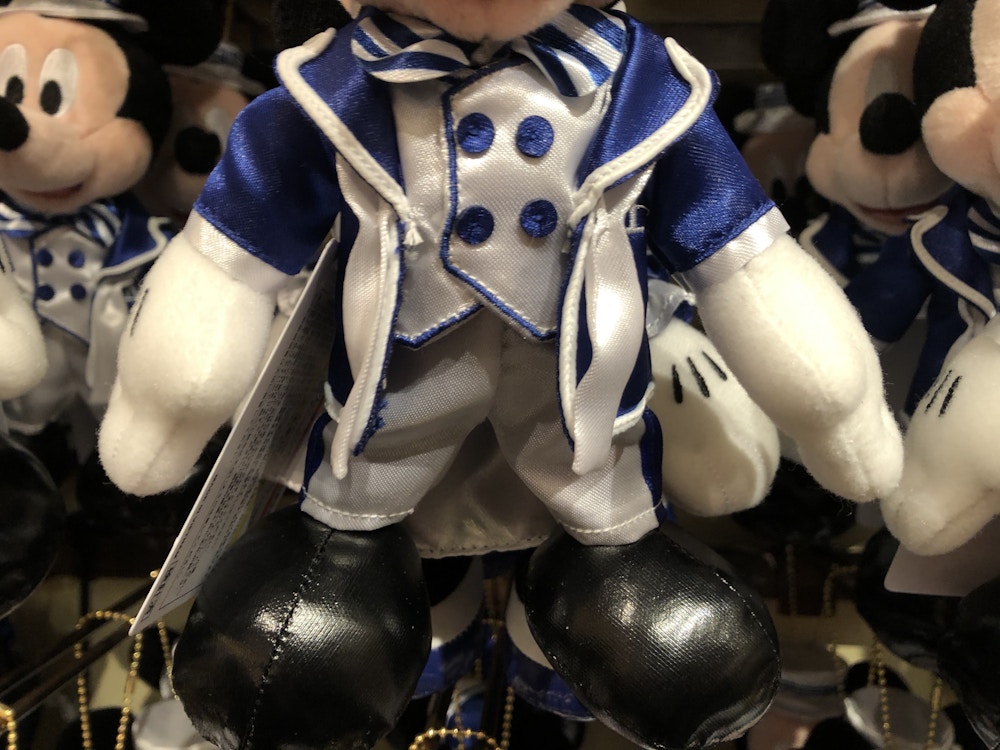 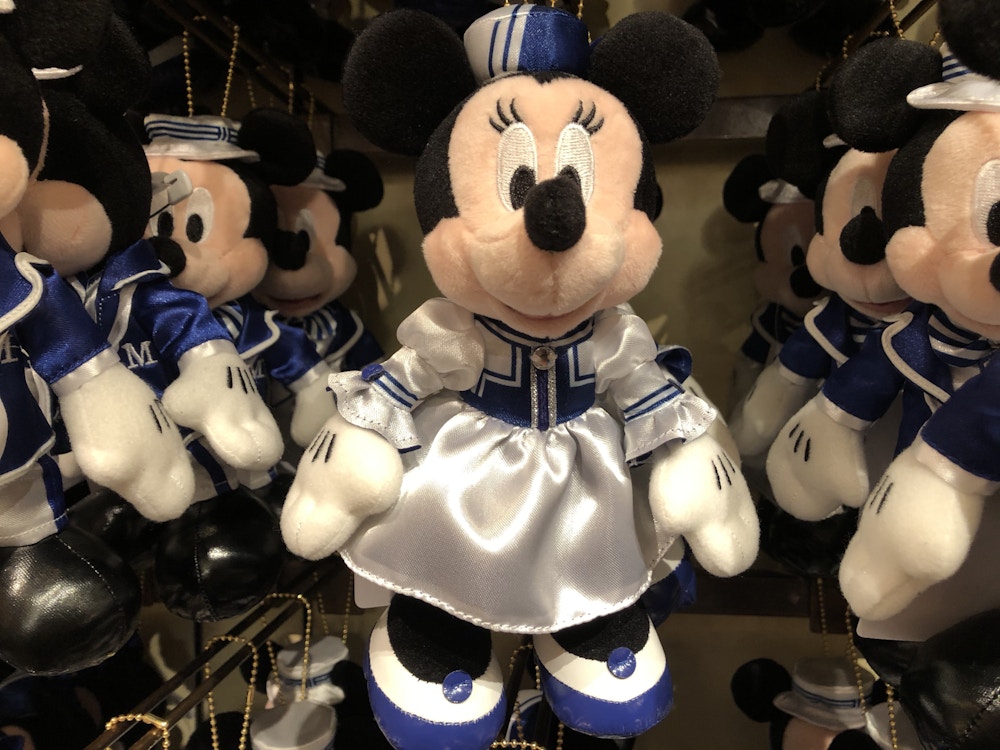 Mickey and Minnie are out for a Sunday stroll in these lovely 1920s-esque outfits. Again featuring whites and blues, you can catch the iconic couple enjoying the atmosphere of the Ambassador Hotel. 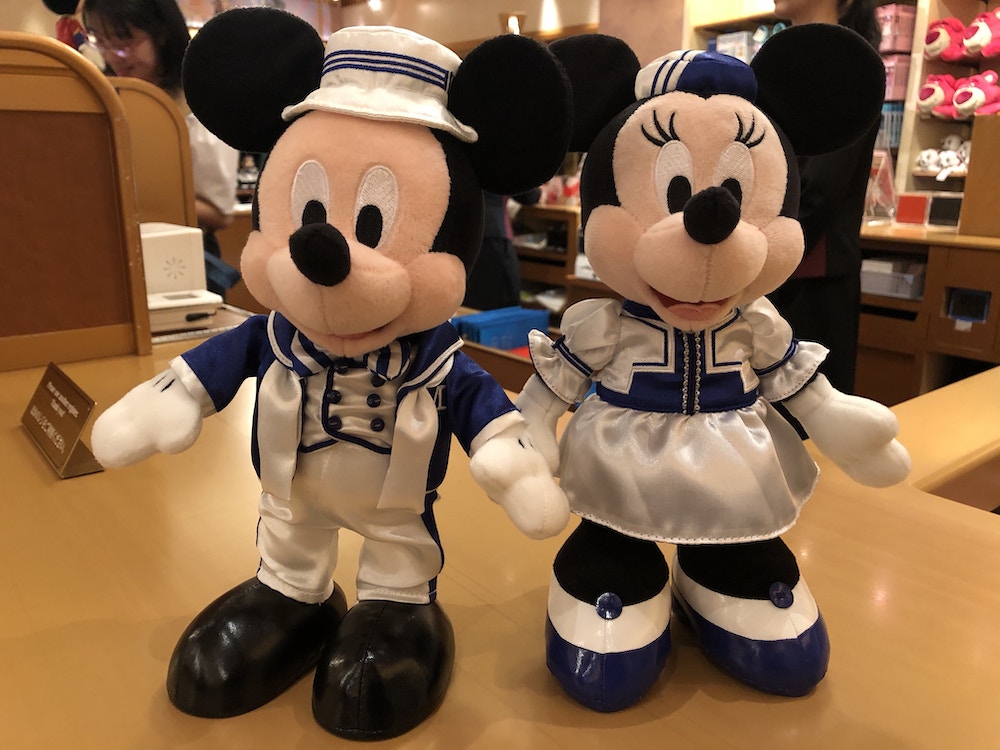 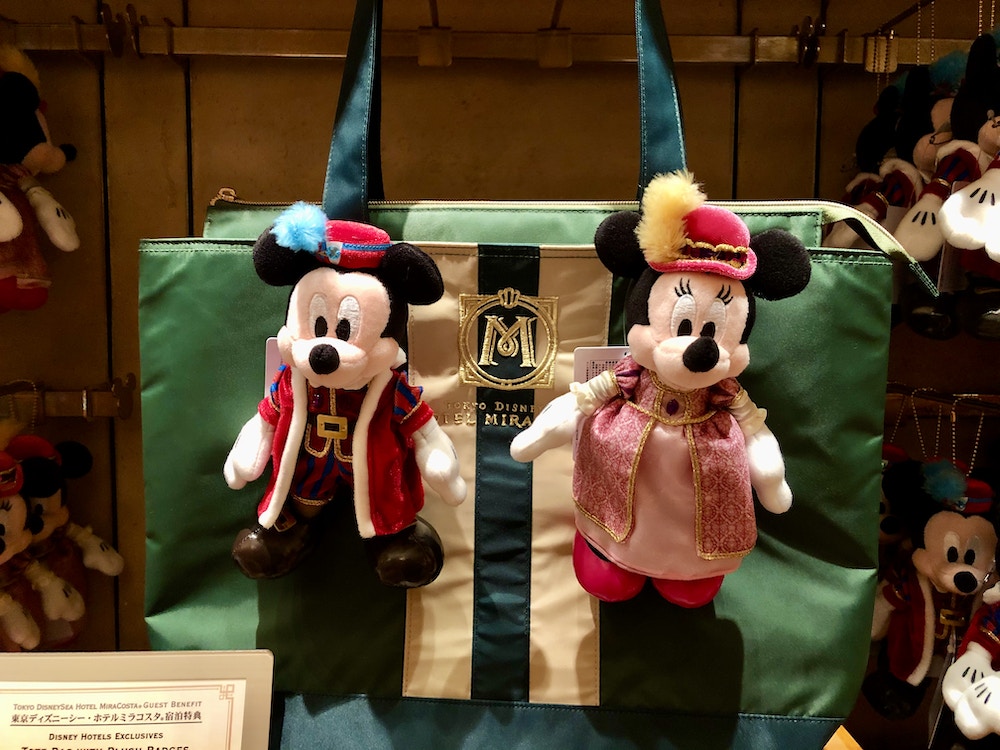 Being integrated right into the Italian-esque Mediterranean Harbor at Tokyo DisneySea, the elegant Hotel MiraCosta is reminiscent of Renaissance Italy. The character designs for Mickey and Minnie absolutely reflect that. 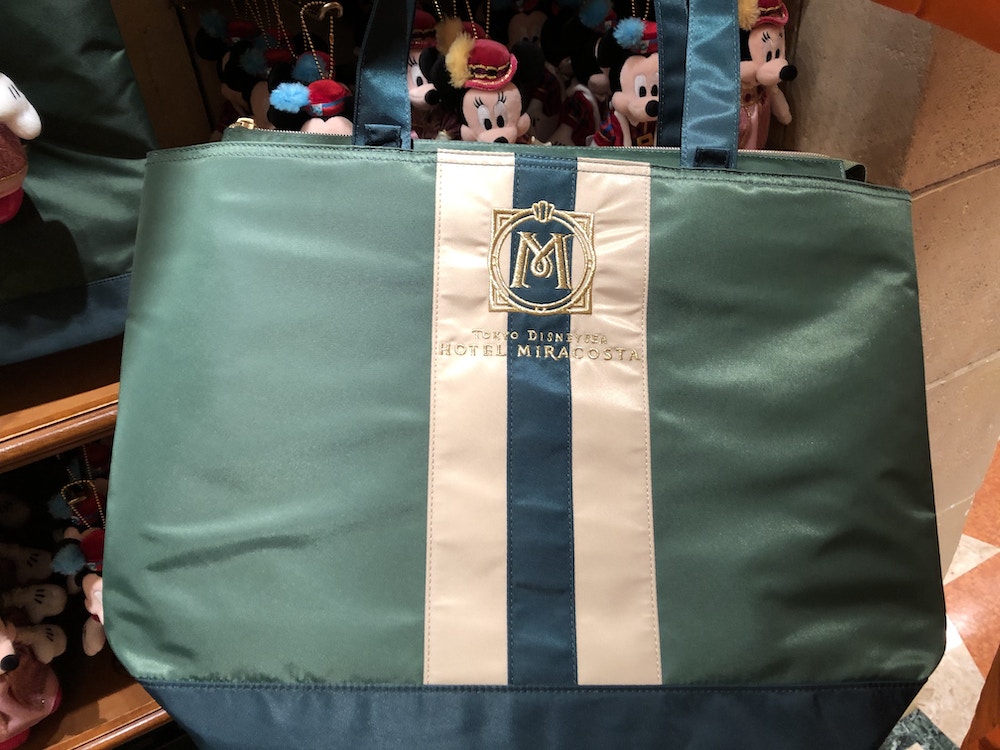 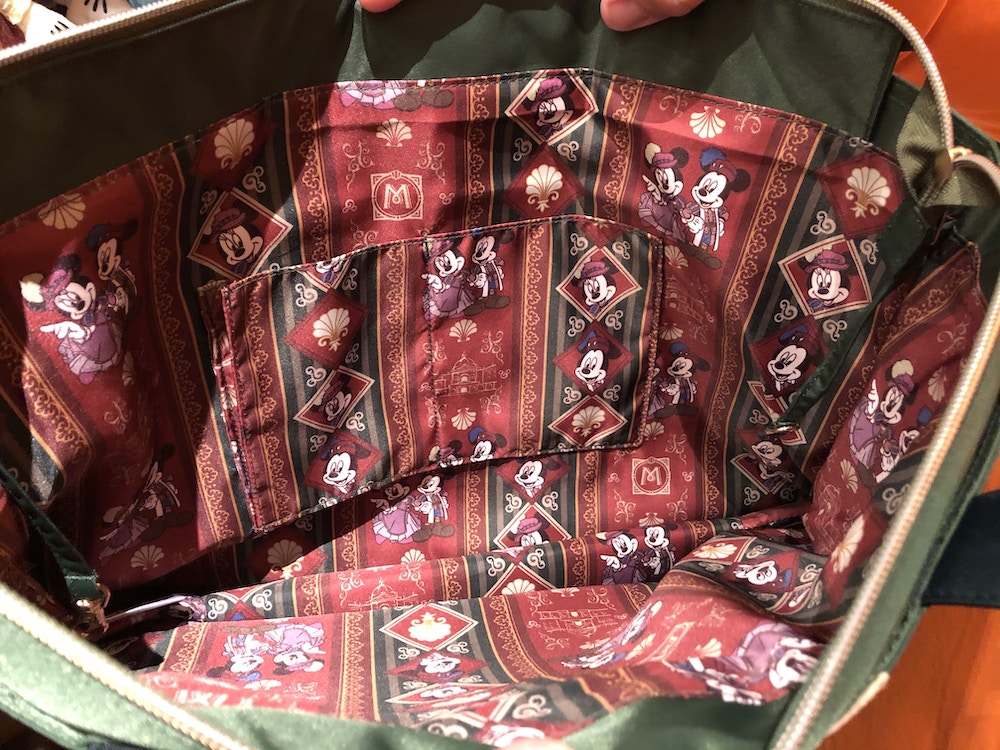 I think this interior fits its hotel the most. The bags all follow the same pattern, but I like this one the most, I think. The red I particularly enjoy, especially how it contrasts with the gold and green 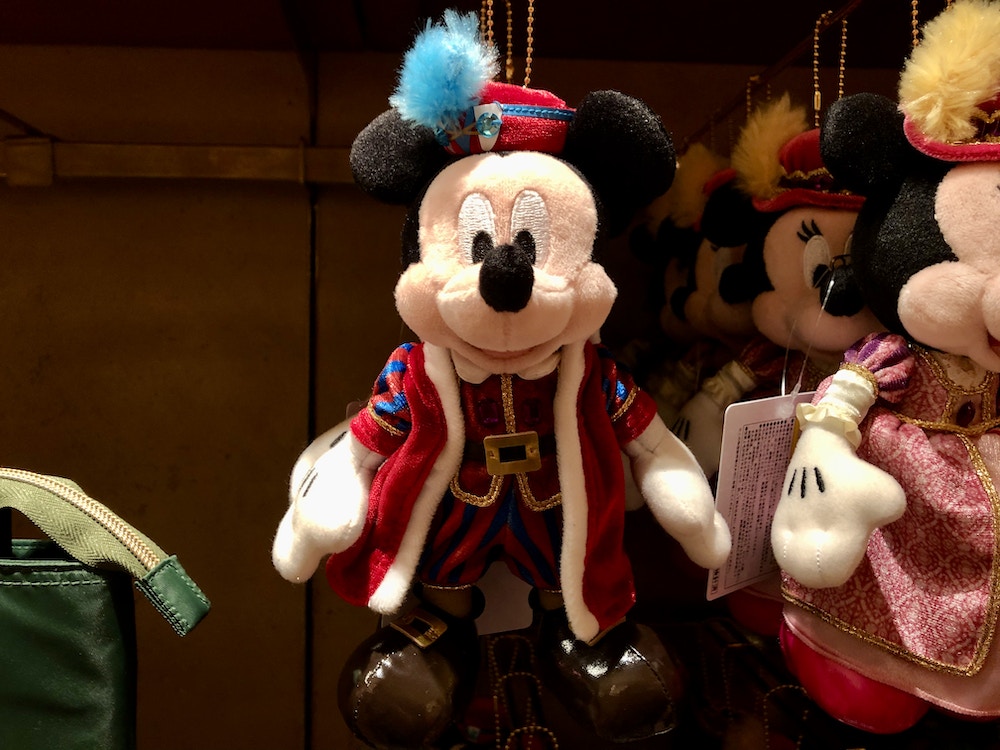 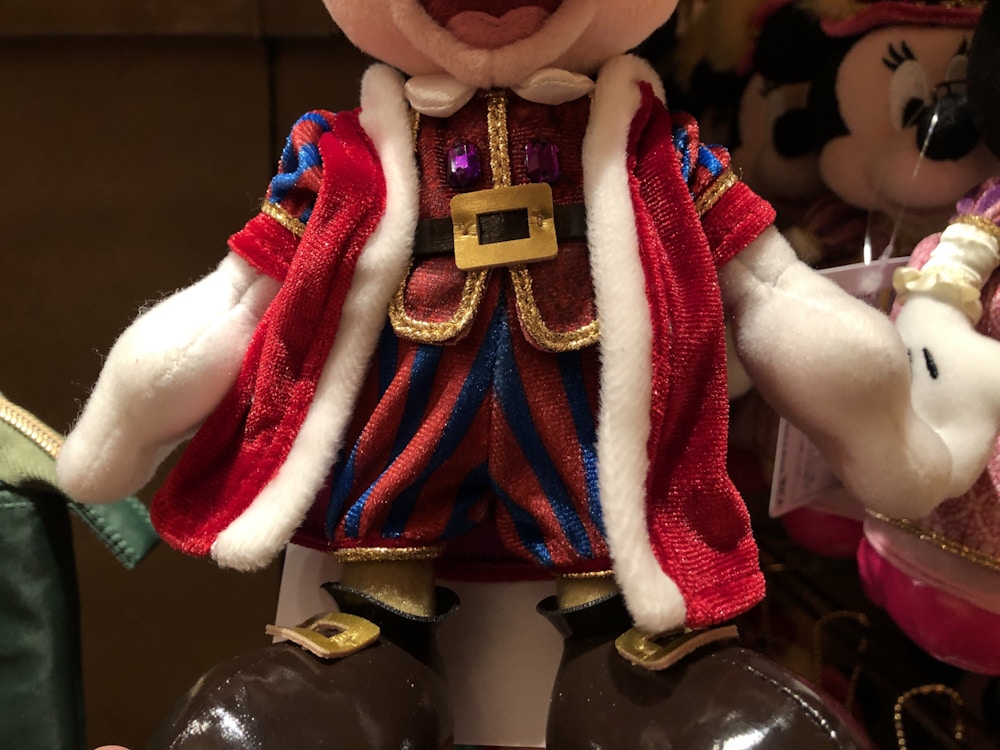 I’m not entirely sure what sort of Renaissance outfit Mickey is in here, but something tells me it’s some sort of royalty! A prince, perhaps? Either way, he features a long, flowing red doublet with a darker red, gold and blue-centric outfit beneath. 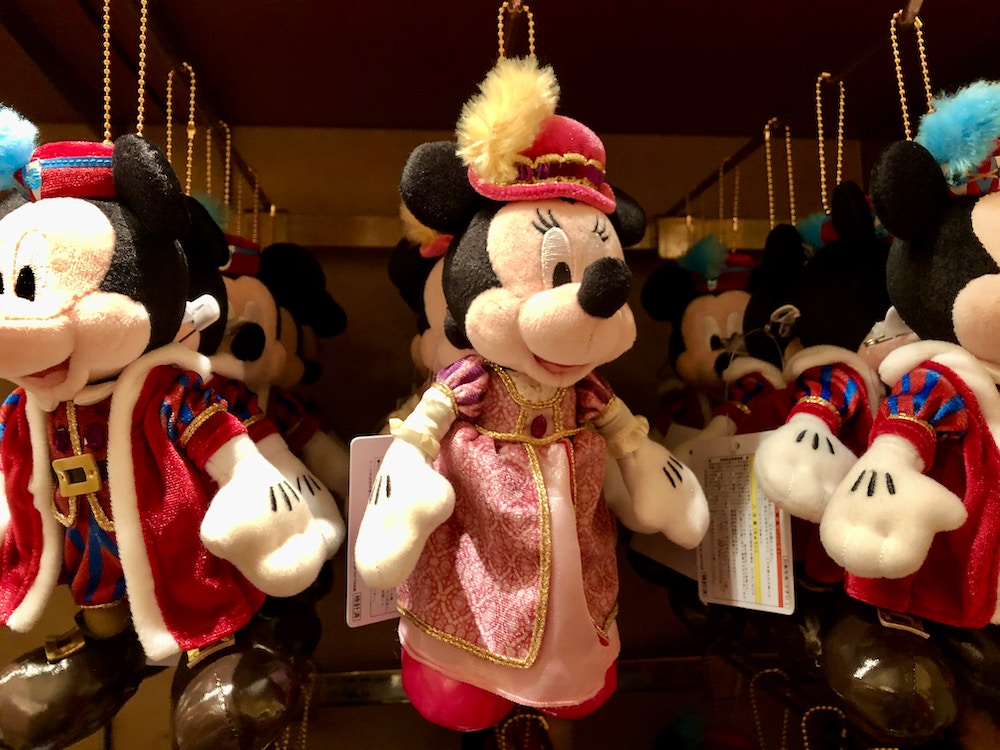 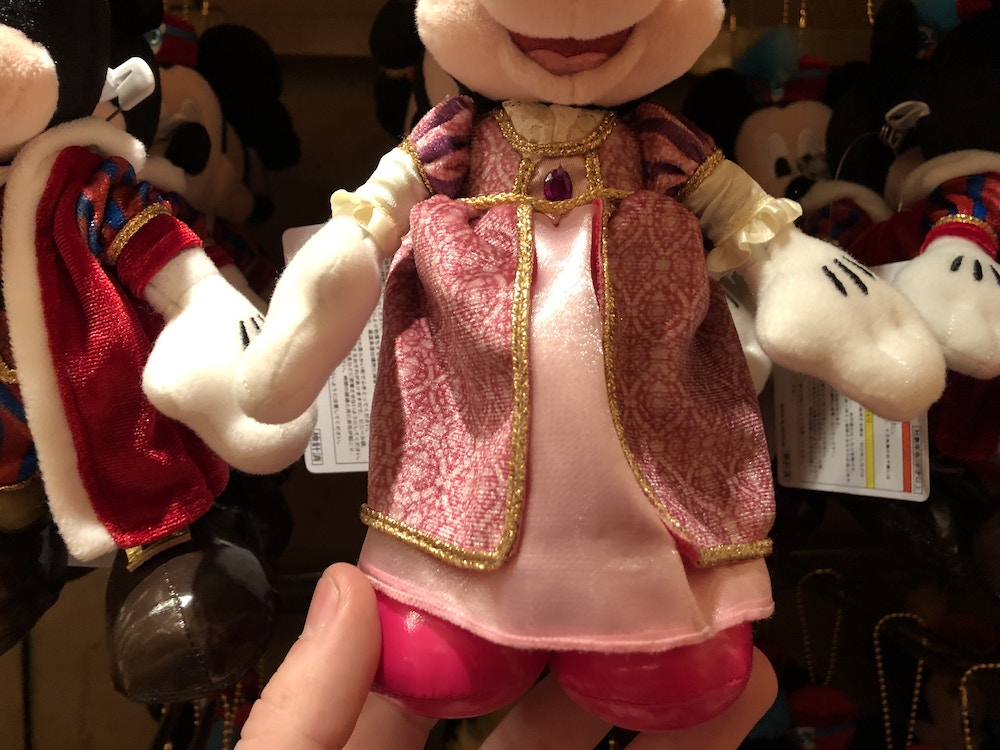 And Minnie is some sort of princess, I believe. It makes me so happy that this amount of attention to detail was given for her dress. 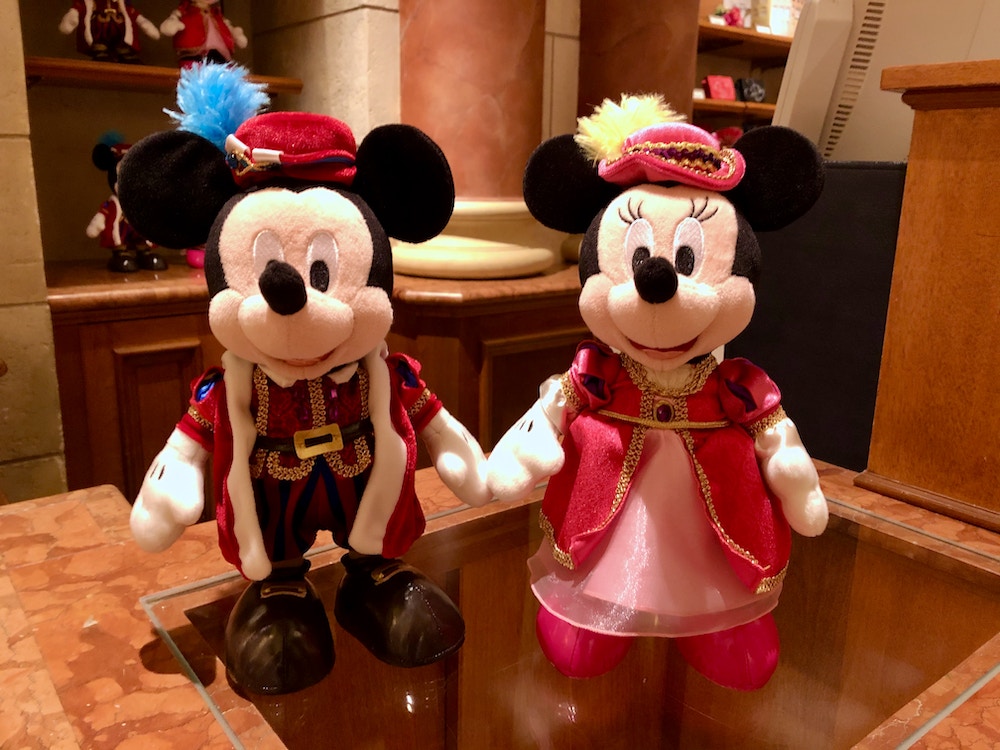 These are in much scarcer numbers than those at the other two hotels. Fun fact: Mickey and Minnie actually do appear in these outfits now and then, particularly at special banquets hosted at MiraCosta. This is true for all three hotels, actually. Goofy, Donald and Pluto all have hotel-specific costumes as well!

Although I do think the standing plushes are cool (if a bit overpriced), I’m glad to see some changes in the merchandise. Folks who visit Tokyo Disney Resort fairly often make the Disney hotels a bit of a splurge thing, maybe once every few years. Thus, keeping things fresh encourages more people to stay and pick up the new merchandise!

What are your thoughts on the new tote bag and stuffed badges at the Tokyo Disney Resort Hotels? Do you have the old standing plushes? Let us know below or on Twitter!

Next
WDWNT Weekly Recap: EPCOT International Festival of the Arts 2020 & New Films Debut, a Guest Pulls the Sword Out of the Stone at Disneyland, and a New Minnie Collectable Series