When it’s cold and you’ve worked up a monstrous appetite after waiting all day for your Boarding Group to be called for Rise of the Resistance, there’s only one classic Hollywood Studios eatery that’ll satisfy your appetite amidst the warm glow of a glamorous time long lost, but never forgotten.

The Hollywood Brown Derby is our go-to on hot Hollywood Studios days (mainly for their famous Cobb Salad), but we’re happy to inform you that the eatery is just as good on a chilly night. Today, we’re checking out two new vegan plant-based options that are as hearty as they are tasty. The restaurant’s winter menu features the usual classics like the Cobb Salad, as well as recent additions like the Heirloom Tomato and Buffalo Mozzarella Salad. The new seasonal soup is a vegan, plant-based Curried Butternut Squash Soup, which could not be more of a contrast from the prior menu’s soup, which was a Cream of Brie cheese soup. Over on the entrees, you have the usual filet, chicken, and fish dishes, but we noticed a new Plant-Based Chopped Steak, which piqued our interest. Sandwiched between the Charred Pork Chop and the Faroe Island Salmon is this plant-based option, waiting for eager vegans and curious omnivores alike to try it. This golden brown Curried Butternut Squash Soup comes served in a large bowl and with a drizzle of achiote oil and a dollop of brown sugar apple chutney in the middle. Despite being a plant-based vegan soup, thanks to the squash and the oil emulsion, it has a dense, almost creamy texture to it, making it especially hearty. While it is very heavy on the curry spices, the sweetness from the brown sugar and apples really round it out the slightly spicy Garam Masala. It isn’t the best soup we’ve had at Brown Derby, but it’s a great vegan dish, and it’ll definitely warm you up. I know many of you are wary whenever an omnivore reviews vegan dishes, but take it from me, if they find it tasty, it’s pretty much a generally good thing. If you remember meat, but don’t eat it anymore, you’ll probably enjoy this. This massive Plant-Based Chopped Steak is like a Salisbury steak, and given that it’s made with Impossible brand “meat”, it looks and tastes surprisingly real. The general consensus throughout the table was that it tasted like really, really good airplane food, but in a nostalgic way. The texture is the only thing that might throw off people who are used to regular steaks, as it’s not very firm, but it holds together well and is exceptionally juicy. The sauce and mushrooms go a long way to help give the dish some umami, and the buttery golden potatoes are a nice side offering. 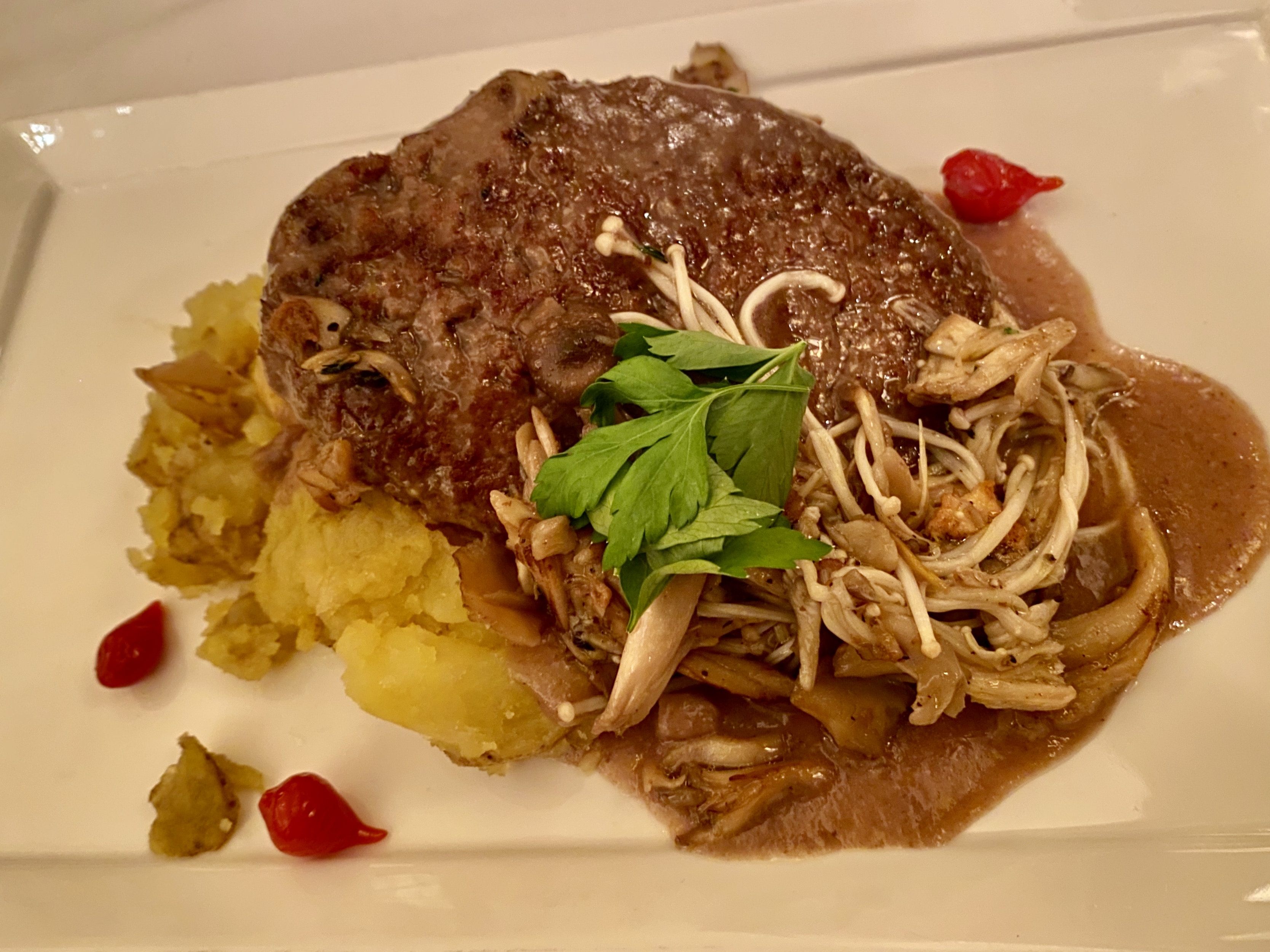 Between the juicy vegan steak and the heavy starches of the potatoes, you’ll definitely leave full, but satisfied.

Overall, we were extremely pleased with these new vegan options, and can’t wait to drop in for another great meal at The Hollywood Brown Derby. It’s fancy, but slightly cozy, the service is great, and now we know there’s something for every dietary preference, including good seasonal additions to the menu.