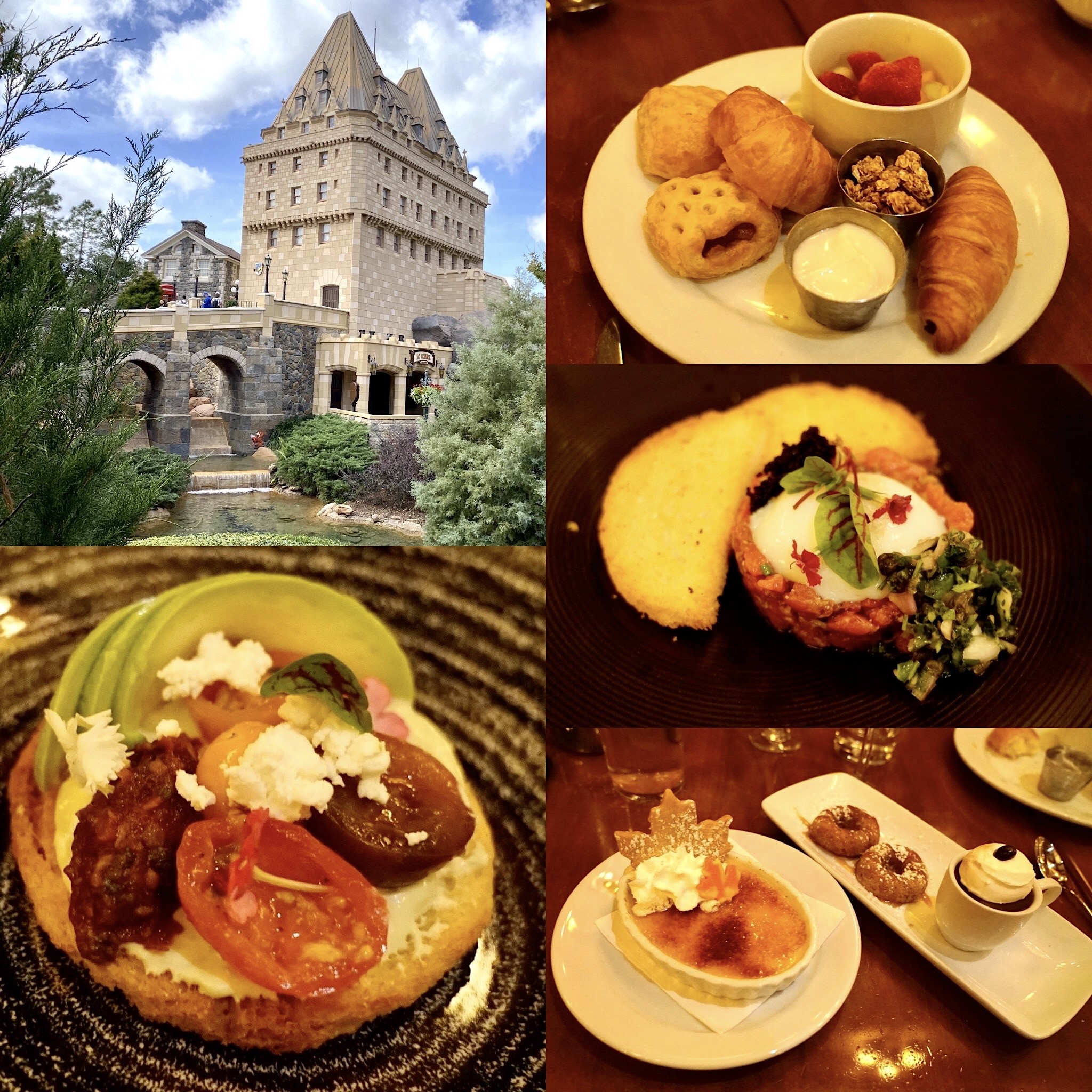 REVIEW: The New Le Cellier Steakhouse Brunch is No Masterpiece at the EPCOT International Festival of the Arts 2020

Announced back in November, Le Cellier Steakhouse is celebrating the arts with a sophisticated brunch offered on weekends from Jan. 18 through Feb. 23 from 11am-3pm throughout the EPCOT International Festival of the Arts 2020. Guests can come and enjoy a wonderful prix fixe brunch menu, which starts with assorted pastries for the table, as well as morning cocktails. While it’s definitely an odd choice to start off your day in a dark, cavernous steakhouse, we couldn’t resist the temptation of this all-new brunch offering inside the park, and let’s face it, the allure of on-property avocado toast. Read on to find out what we think are the best options on the menu, and whether this Festival of the Arts brunch is right for you! 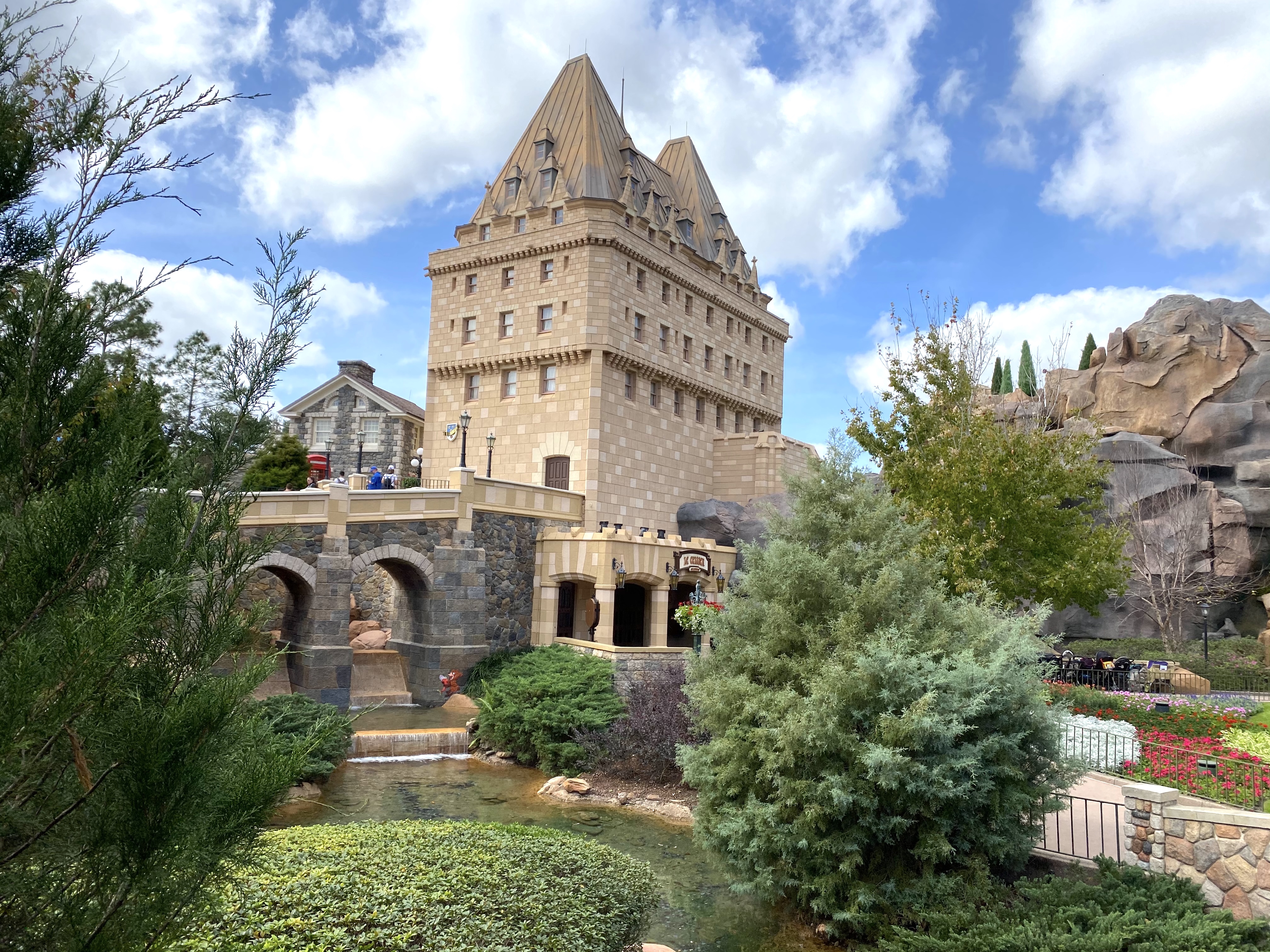 Le Cellier Steakhouse is located in the Canada Pavilion at EPCOT, where you can also view the new “Canada Far and Wide” film that debuted as part of the festival. 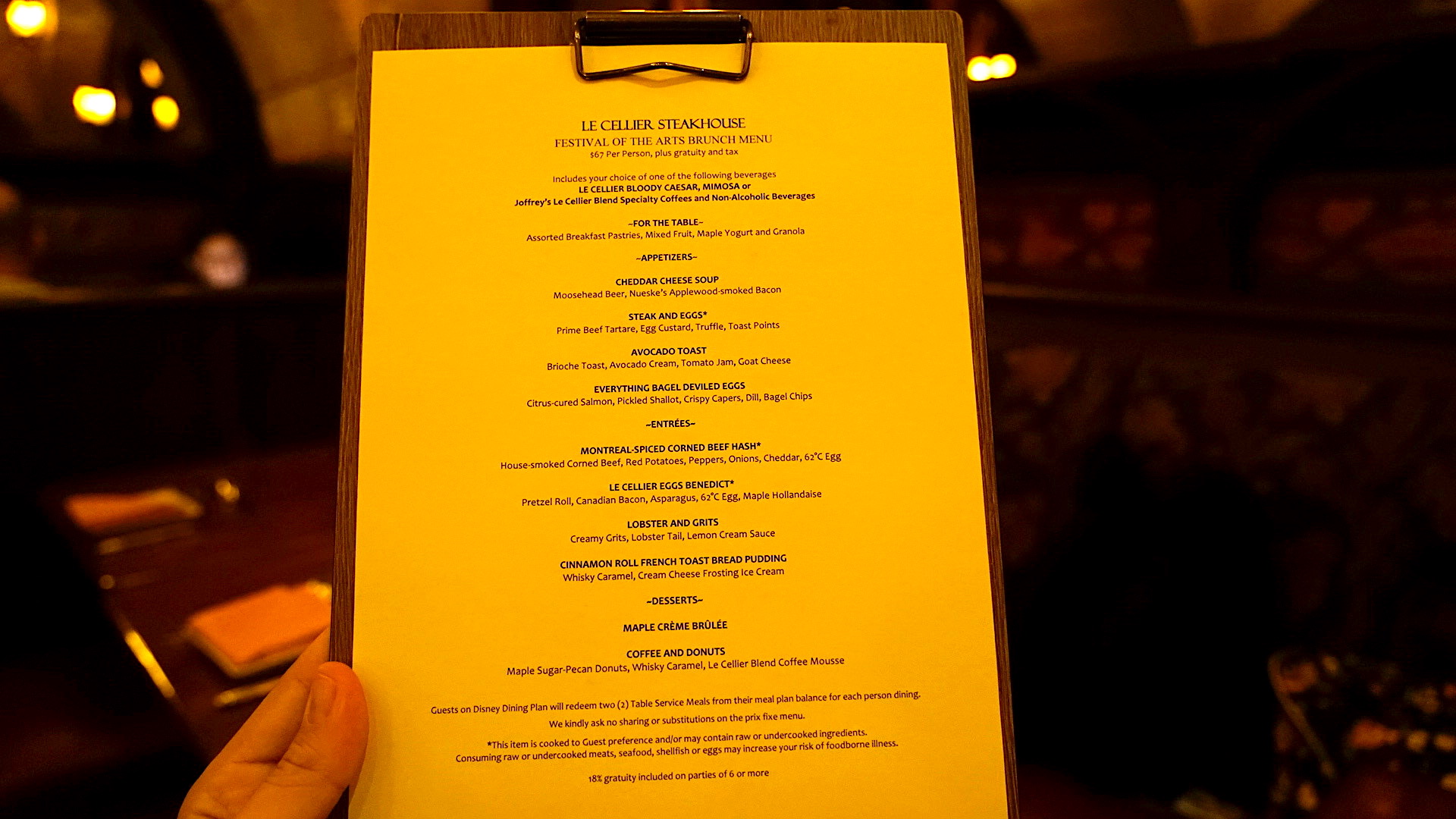 Brunch costs $67 for adults and $39 for children (plus tax) or two entitlements on the Disney Dining Plan, and reservations are highly recommended. Everyone gets their choice of morning beverage, including a Mimosa or Bloody Caesar, plus a plate full of assorted breakfast pastries, fruits, and yogurt. Then, you have your selection of appetizer, entree, and dessert. 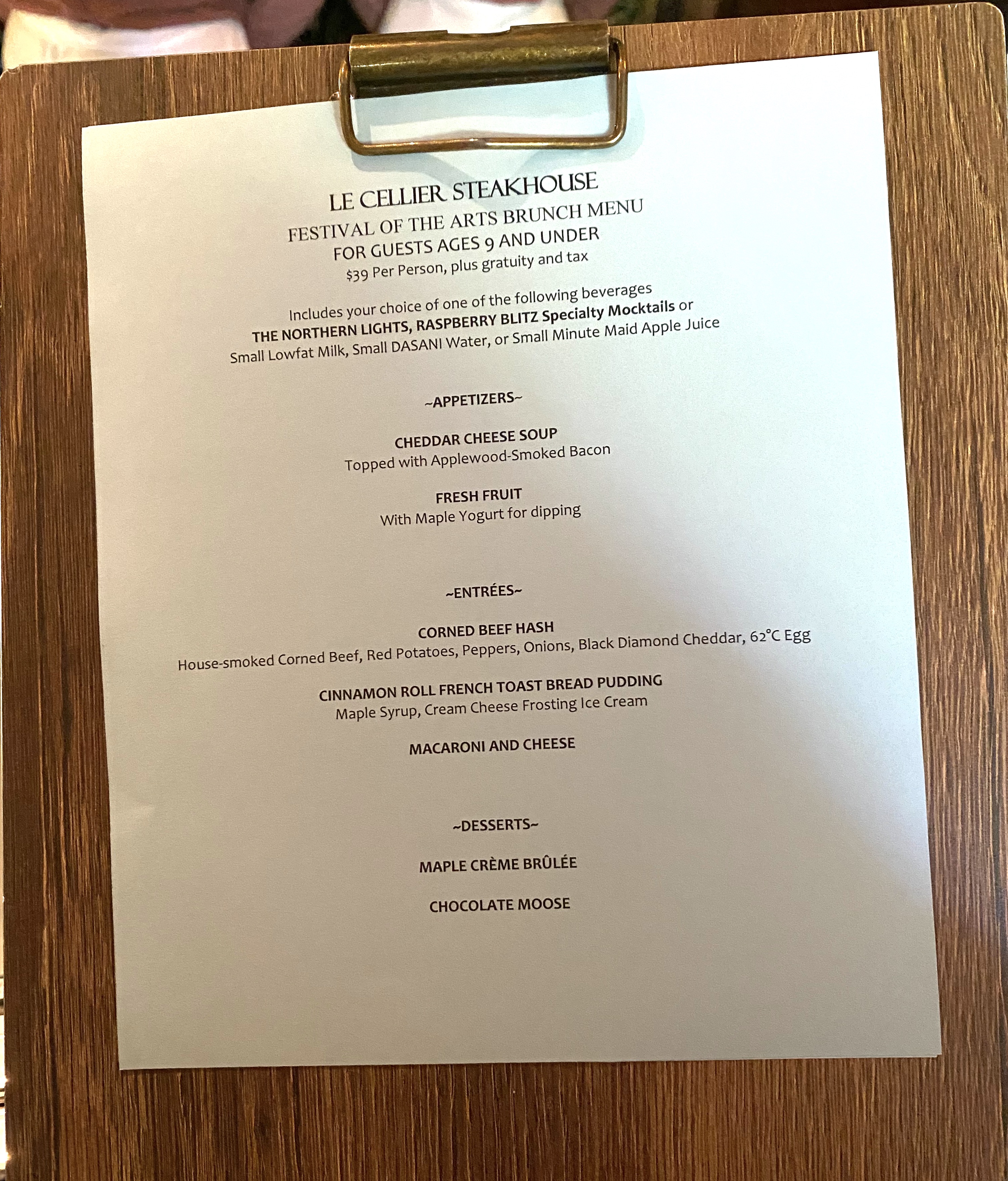 The kids menu features some options from the adults menu, plus some fun mocktails and favorites from the restaurant’s regular kids menu, like the Chocolate Moose (which, by the way, is chocolate mousse shaped like an actual moose.) 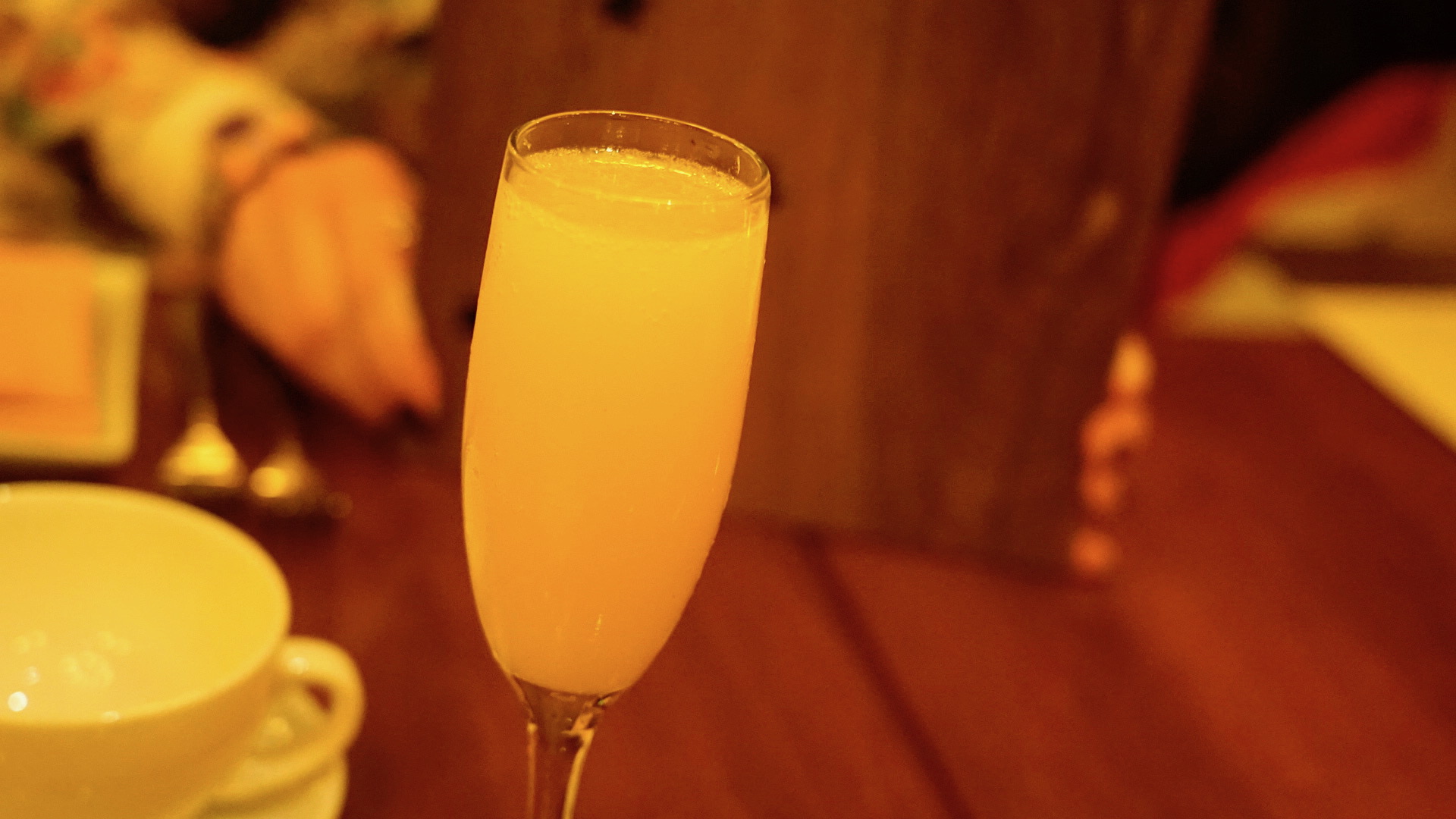 The house Mimosa is made with Cupcake Prosecco and orange juice. It’s basically what you’d expect, with a fair ratio of Prosecco to juice. 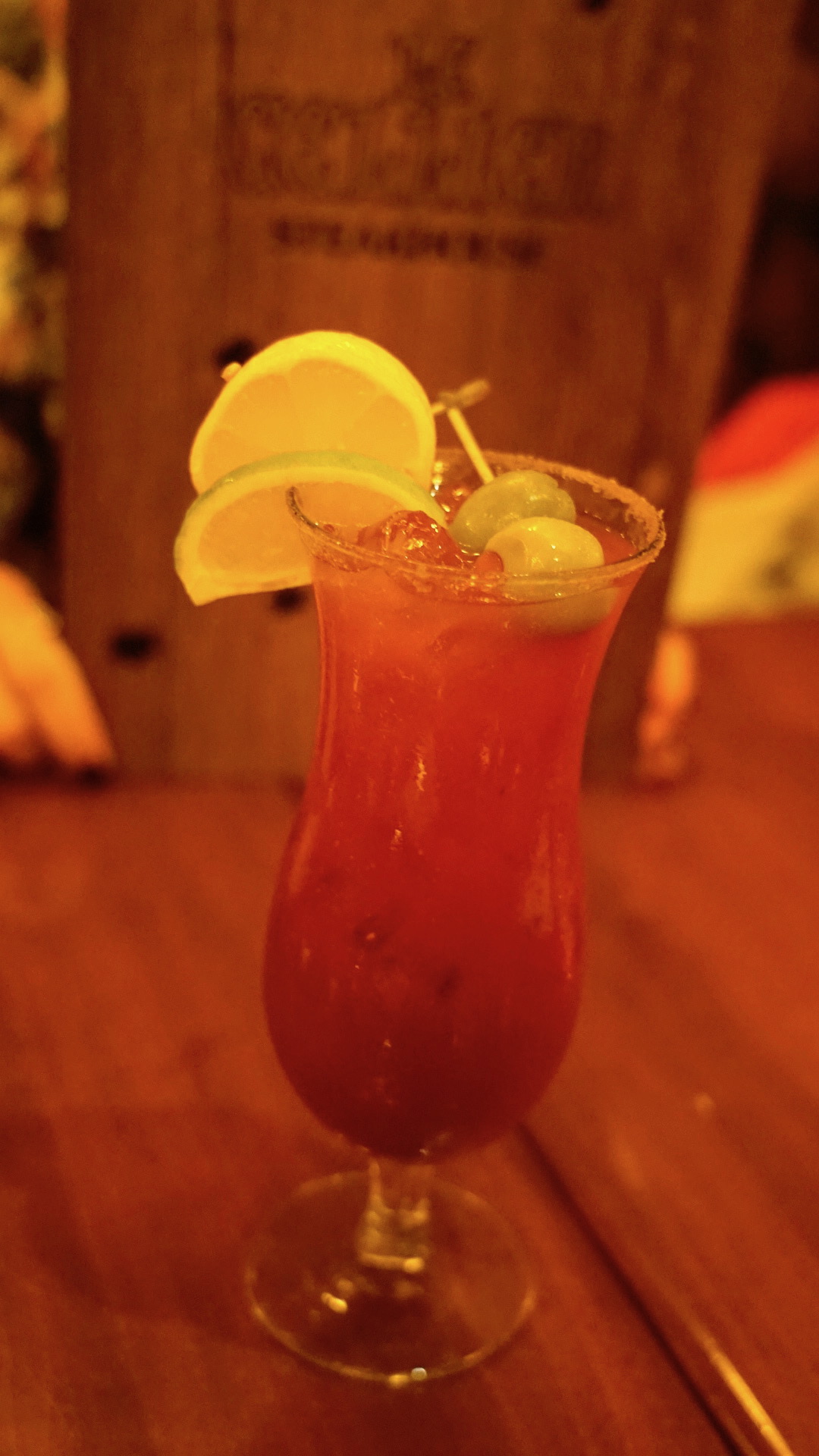 The Bloody Caesar is bloody delicious! It has just the right amount of spice, with an excellent balance of flavor between the horseradish, Worcestershire, alcohol, and Clamato juice. (Clamato juice is what makes it a Caesar, as opposed to a Bloody Mary.) Make sure you give it a good squeeze of lemon and lime to pull it all together perfectly. 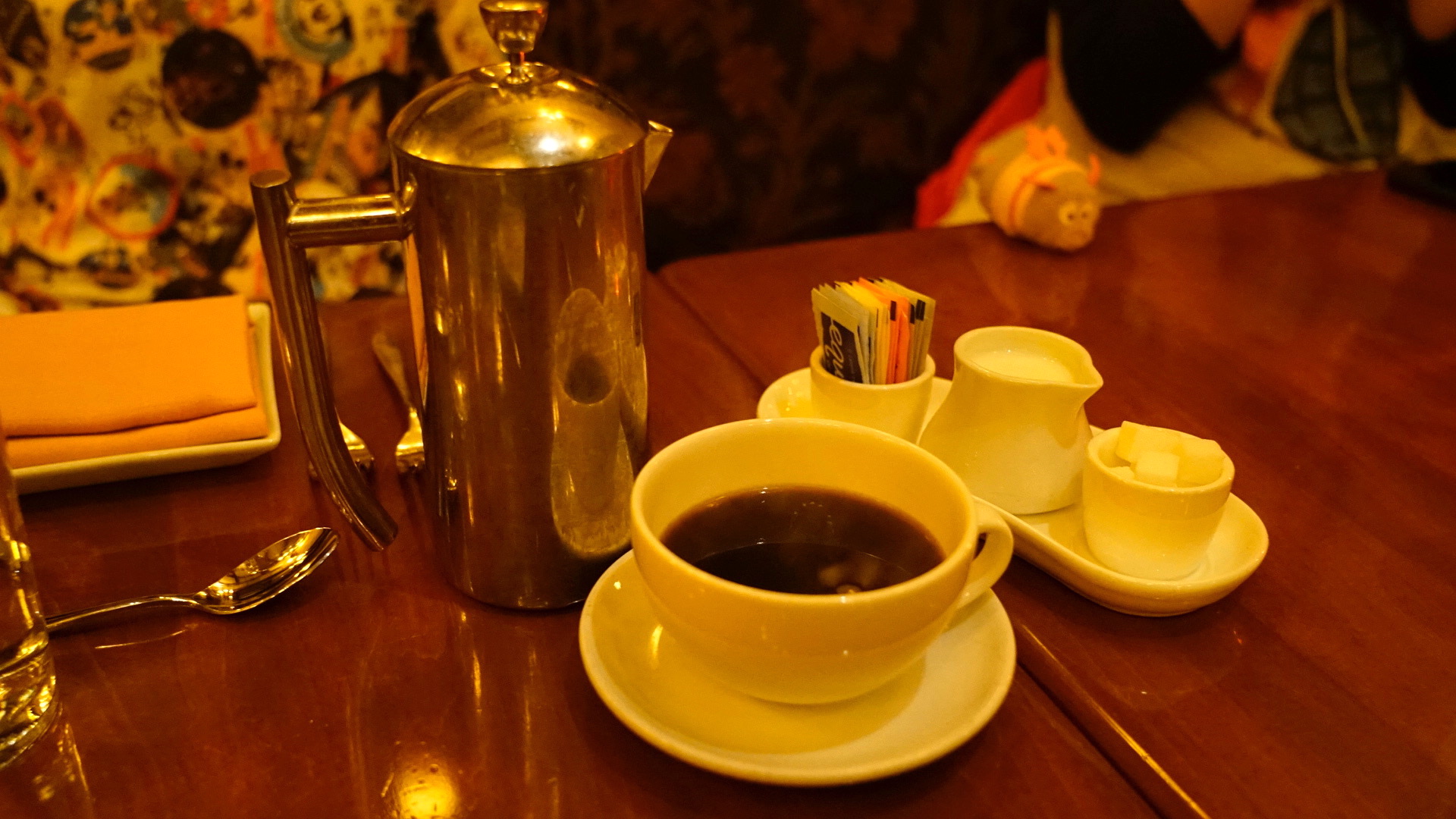 We were excited at the inclusion of specialty press pot coffee, but it comes at a price: Only one (1) beverage is included. You can’t get coffee and an alcoholic beverage unless you pay extra. Do note that the only coffee available is the press pot, so you can’t get a cup of regular ol’ joe here. 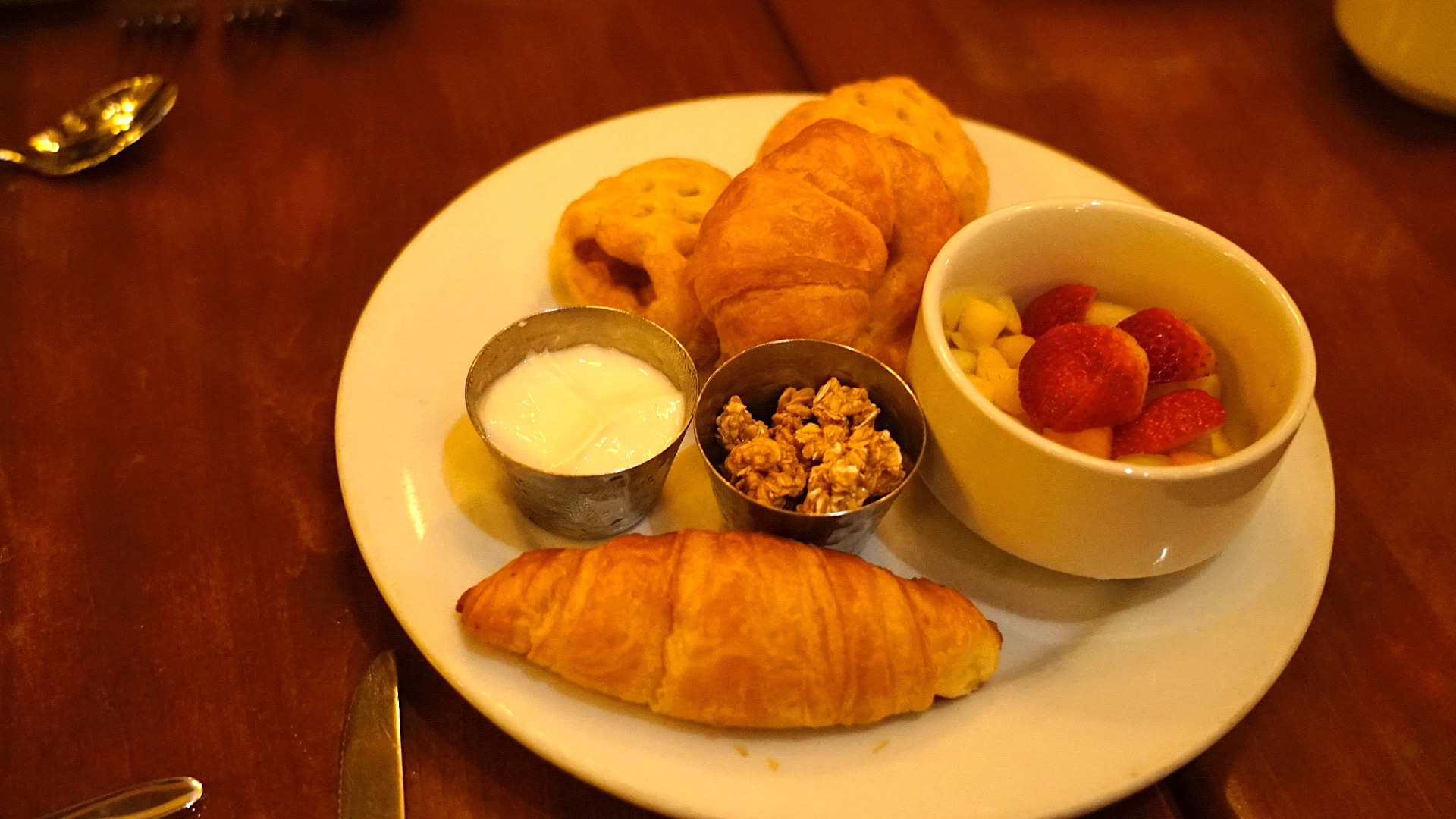 The pastries are served warm, which is a nice touch. The apple danish was very flaky, and surprisingly good. The chocolate croissant was tasty, but basic. The plain croissant was flaky, but dry and should have been served with butter. 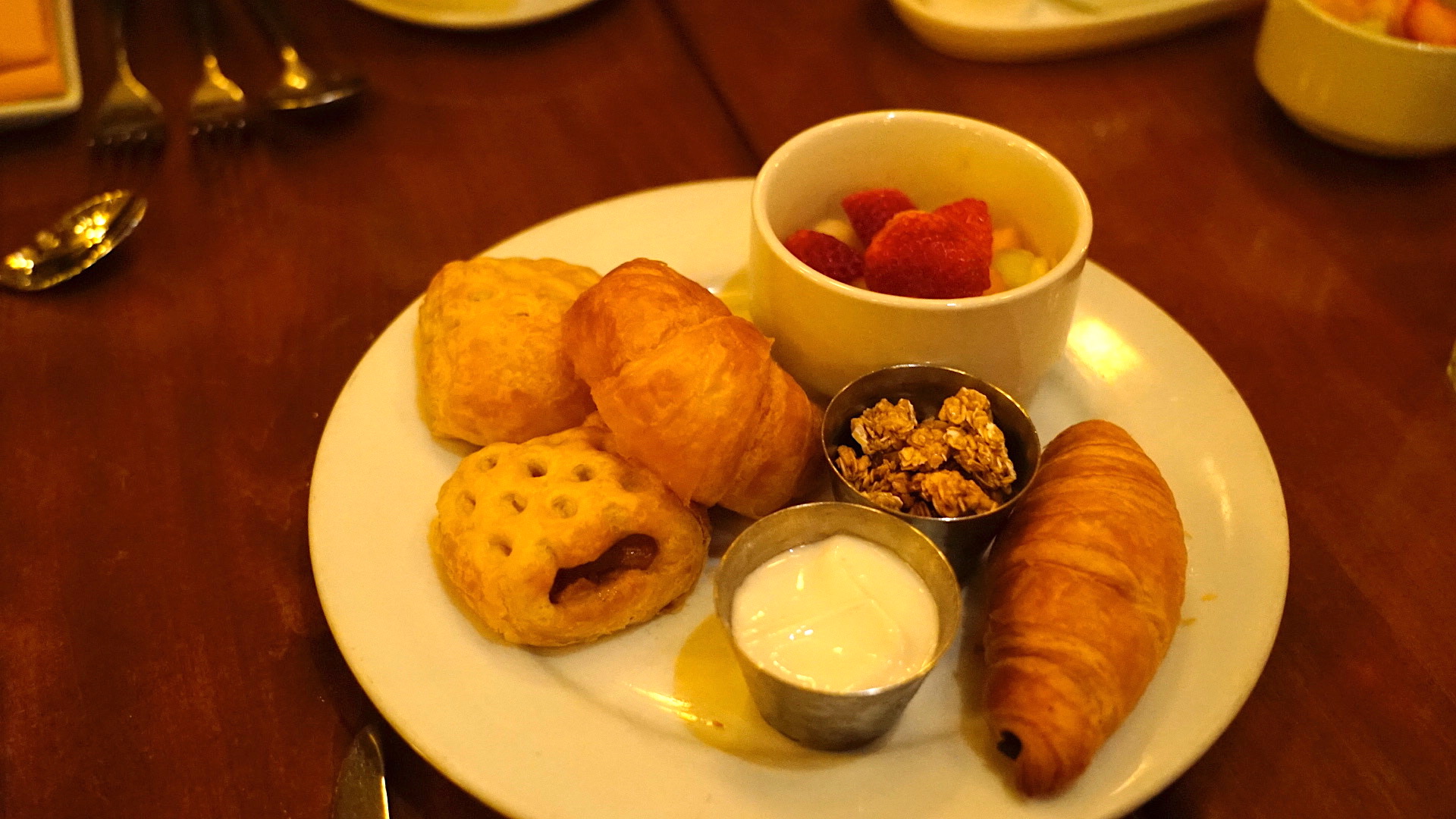 The fruit cup is something akin to what you’d get at a Best Western breakfast buffet, with cantaloupe, honeydew, and pineapple cubes, and strawberry halves on top. It needed at least blueberries or blackberries, and could have been presented much nicer.

The granola and yogurt was comprised of a maple yogurt that was tart and not too sweet, and slightly thick, like Greek yogurt. The granola was fairly typical, but of decent quality. If you mix the granola into the yogurt, the granola overpowers the maple, so make sure to taste the yogurt before mixing it with granola. 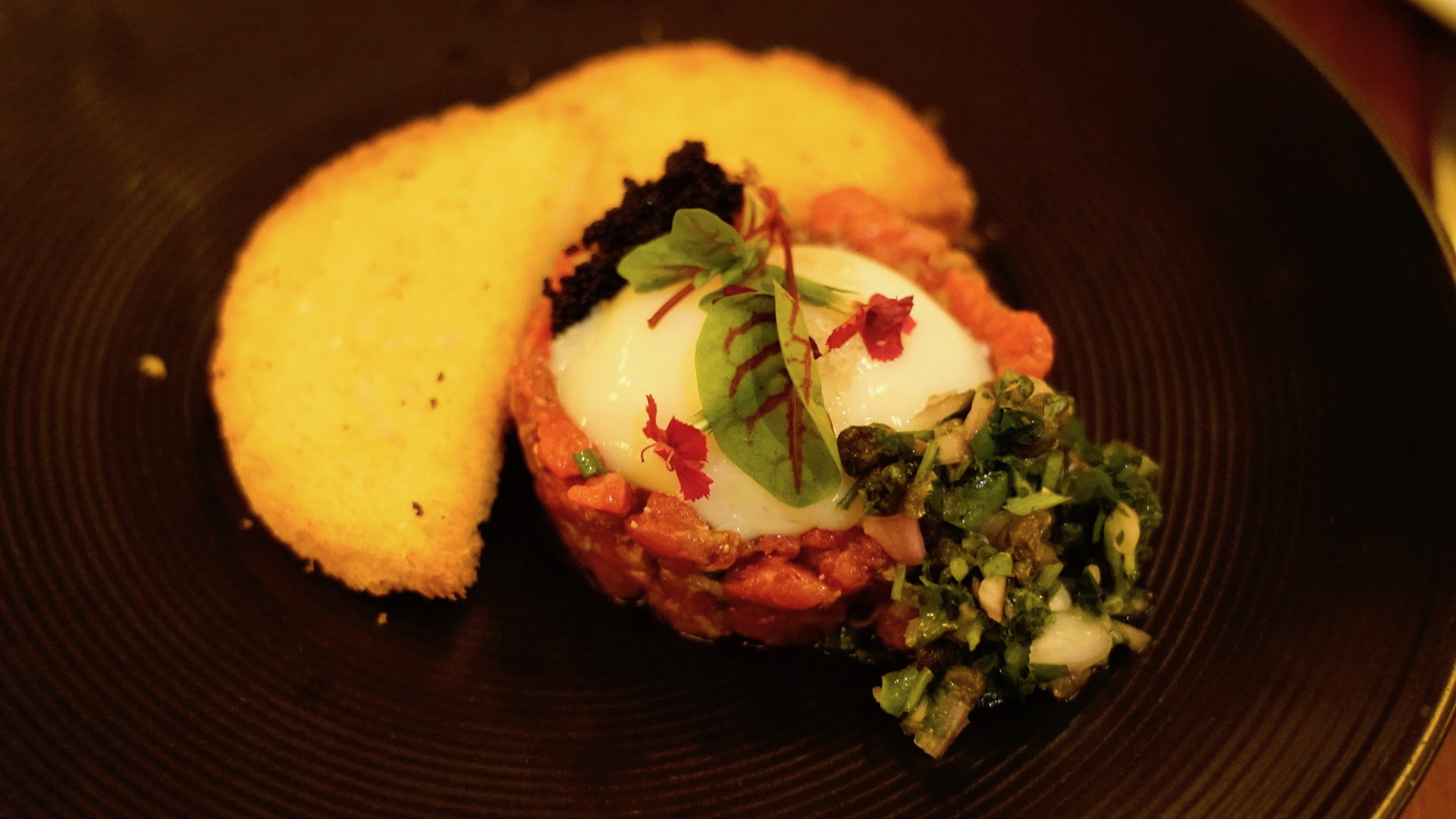 As was to be expected, the table had some mixed feelings on the steak tartare. Some of us thought it was great, some found it rather lacking. It’s basically a heap of raw steak and diced tomato with a poached egg on top. It seems like depending on which forkful you got, you got either a nice mix of steak and tomato, or mostly tomato. The egg was beautifully cooked, however. Spreading it on the crostini was a nice way to eat it, almost like a bruschetta. 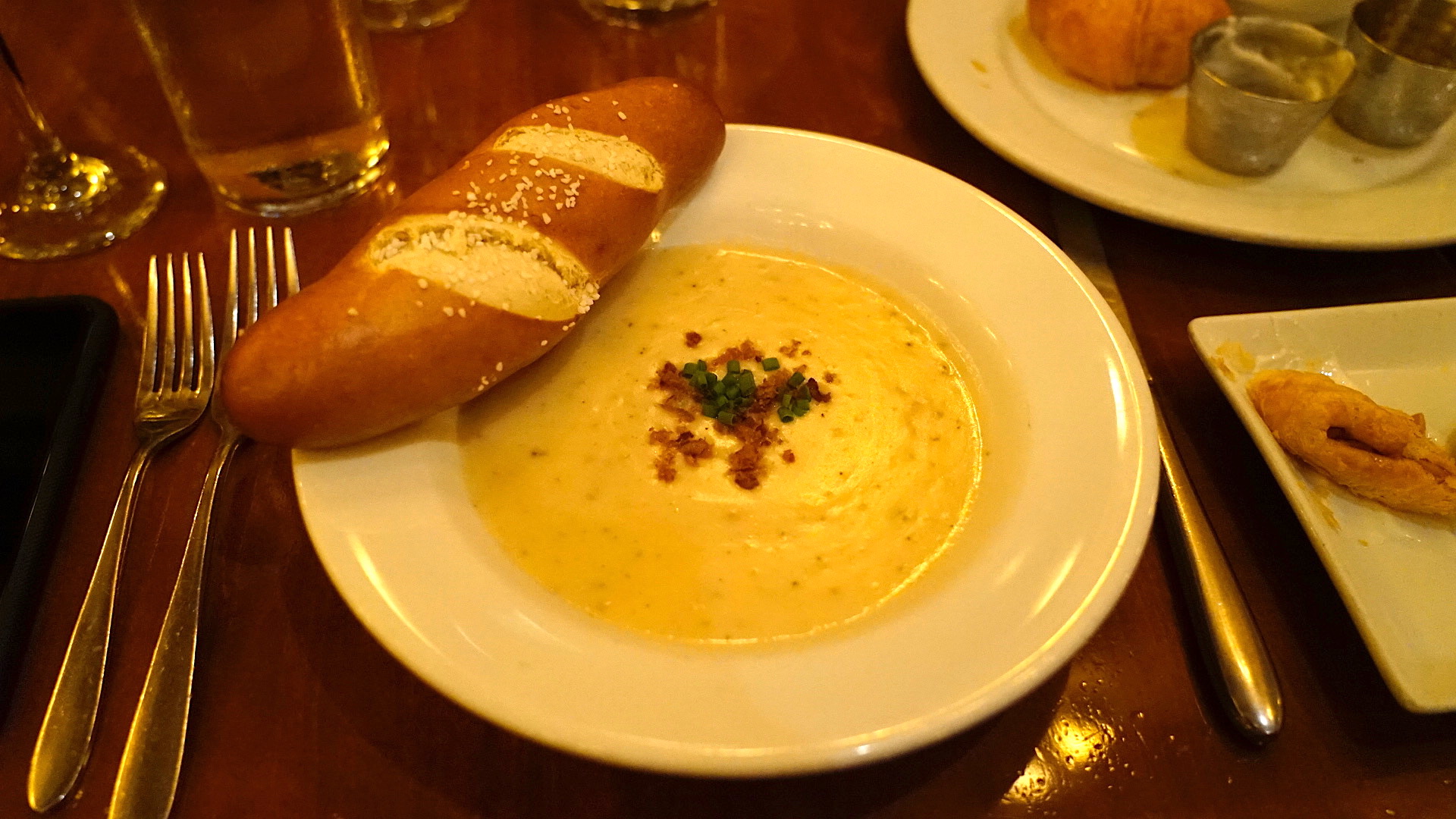 The Cheddar Cheese Soup was the standard Le Cellier offering, a crowd favorite. But since it’s available at other meals here, we’d recommend choosing one of the special brunch choices. 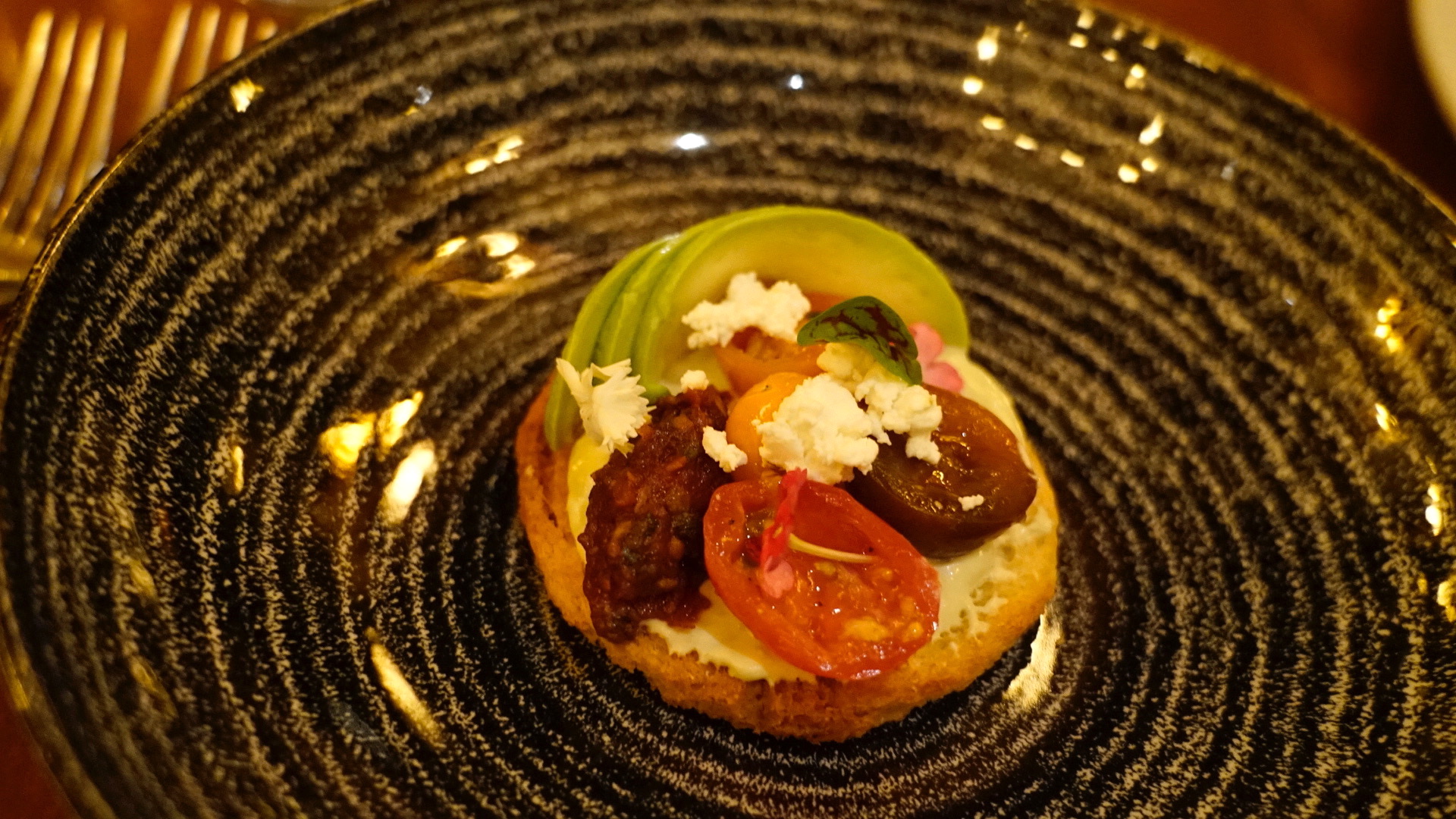 This is not your typical avocado toast. 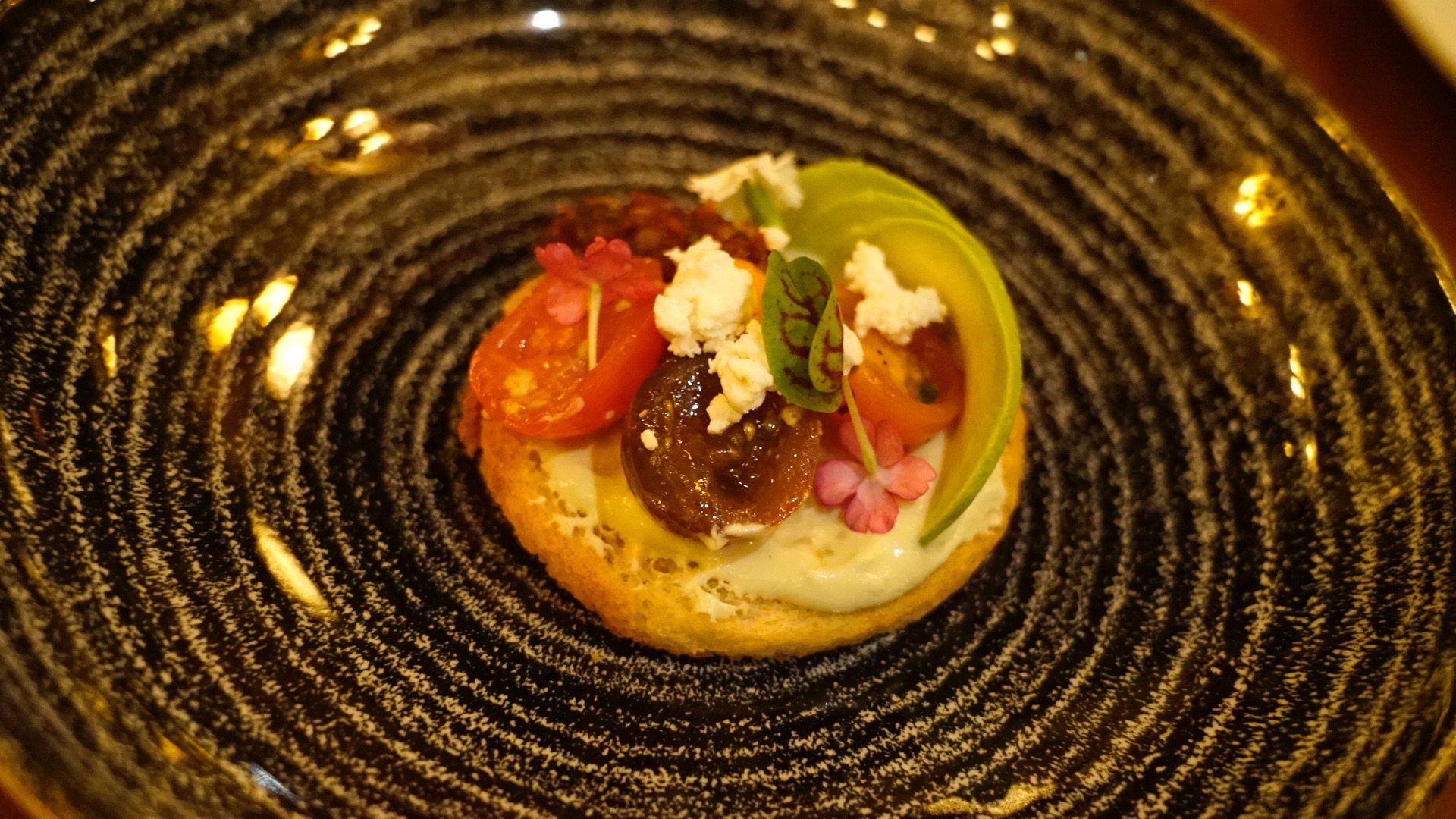 Crostini (the same that comes with the Steak and Eggs) is covered with a tart goat cheese spread and topped with a few scarce cherry tomato halves, but overall when you mix some avocado, tomato, and bacon jam (which is a little spicy), it’s quite a nice blend of flavors. 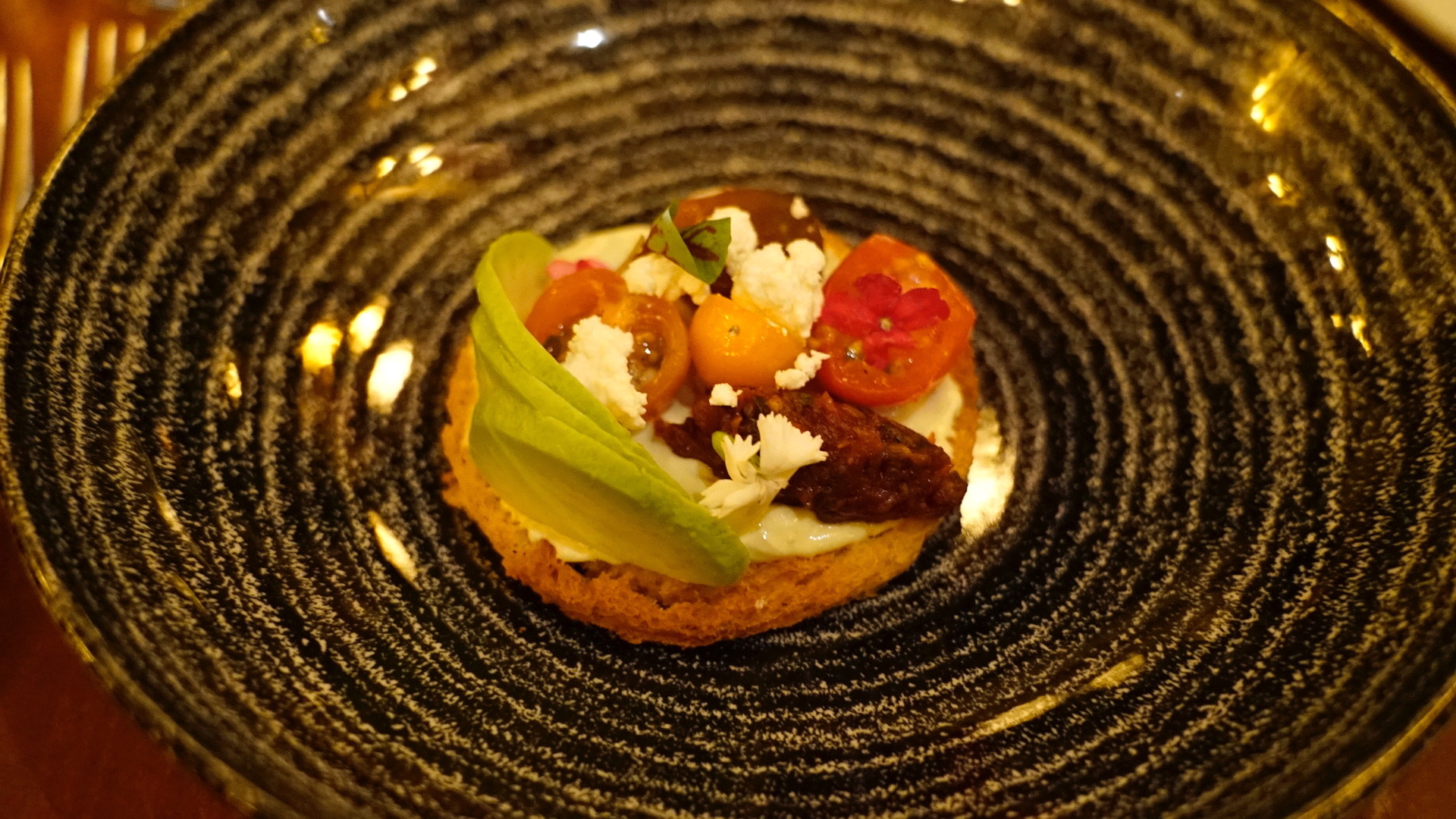 This wouldn’t be a first choice for most people (unless they’re trying to be trendy), but it’s a decent option. 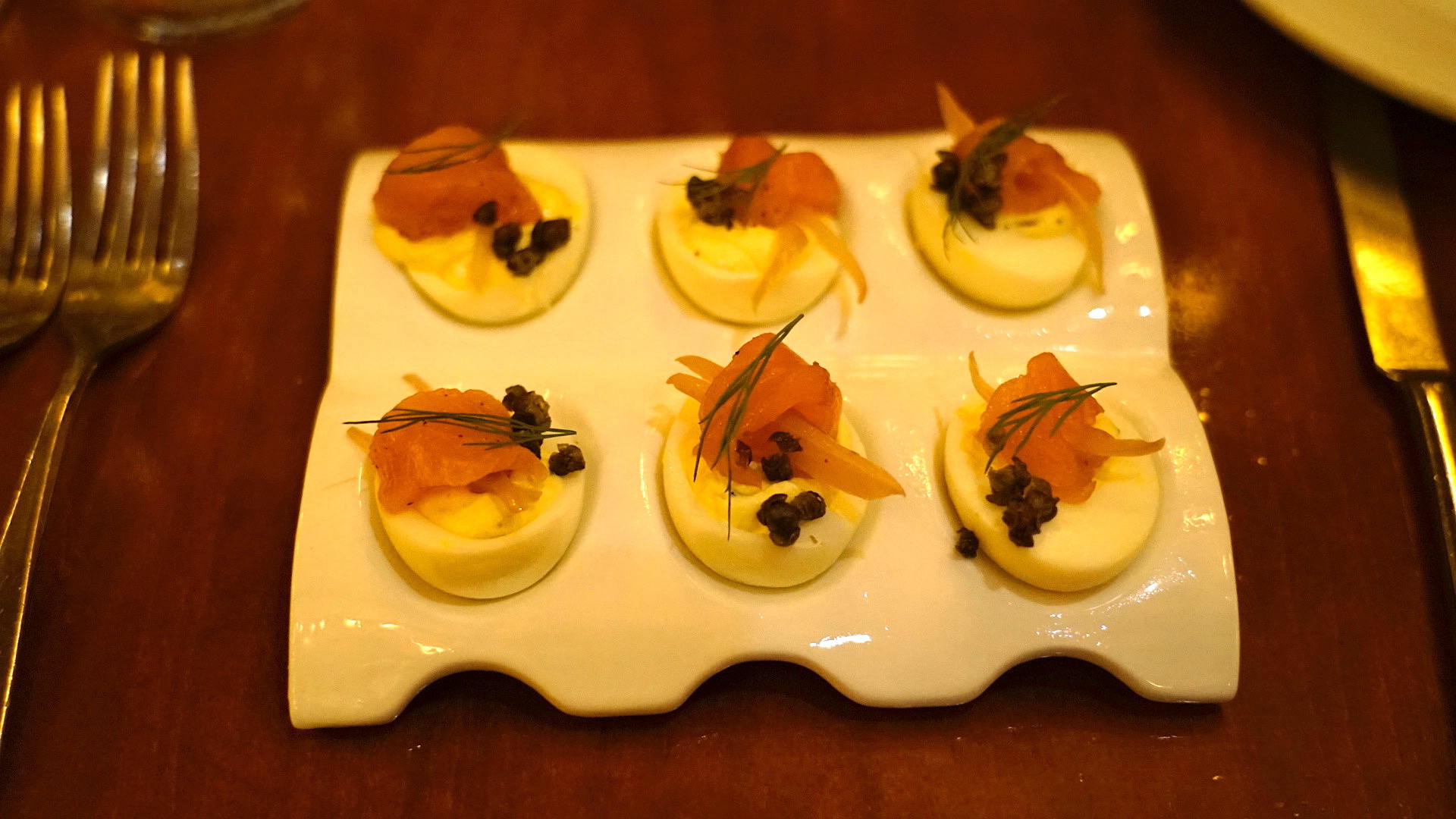 We expected this dish to include two or maybe three deviled eggs, but they came out as six. The capers here are baked, which makes them very tasty and a bit crunchy. The deviled filling is lusciously creamy and take the dish to the next level. The salmon on top is fantastic. Definitely the favorite of the apps. 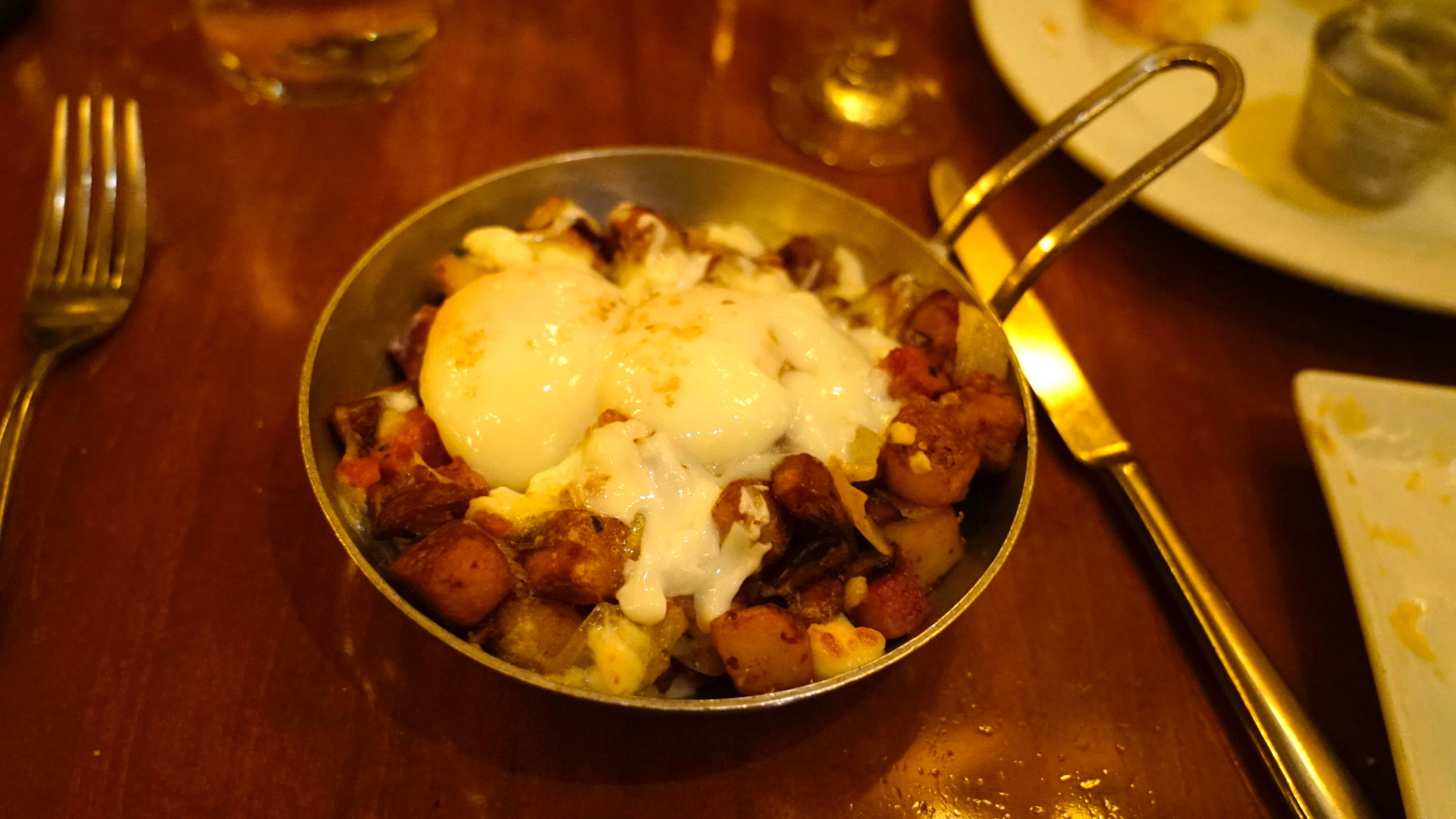 The hash was surprisingly the top pick of the group. A hearty mix of corned beef chunks, potato, onion, and bell pepper topped with two tender 60°C eggs. They’re definitely getting their money’s worth out of the sous vide machine here, as it’s the same temperature egg as the ones used in the Steak and Egg app and the Eggs Benedict entree. 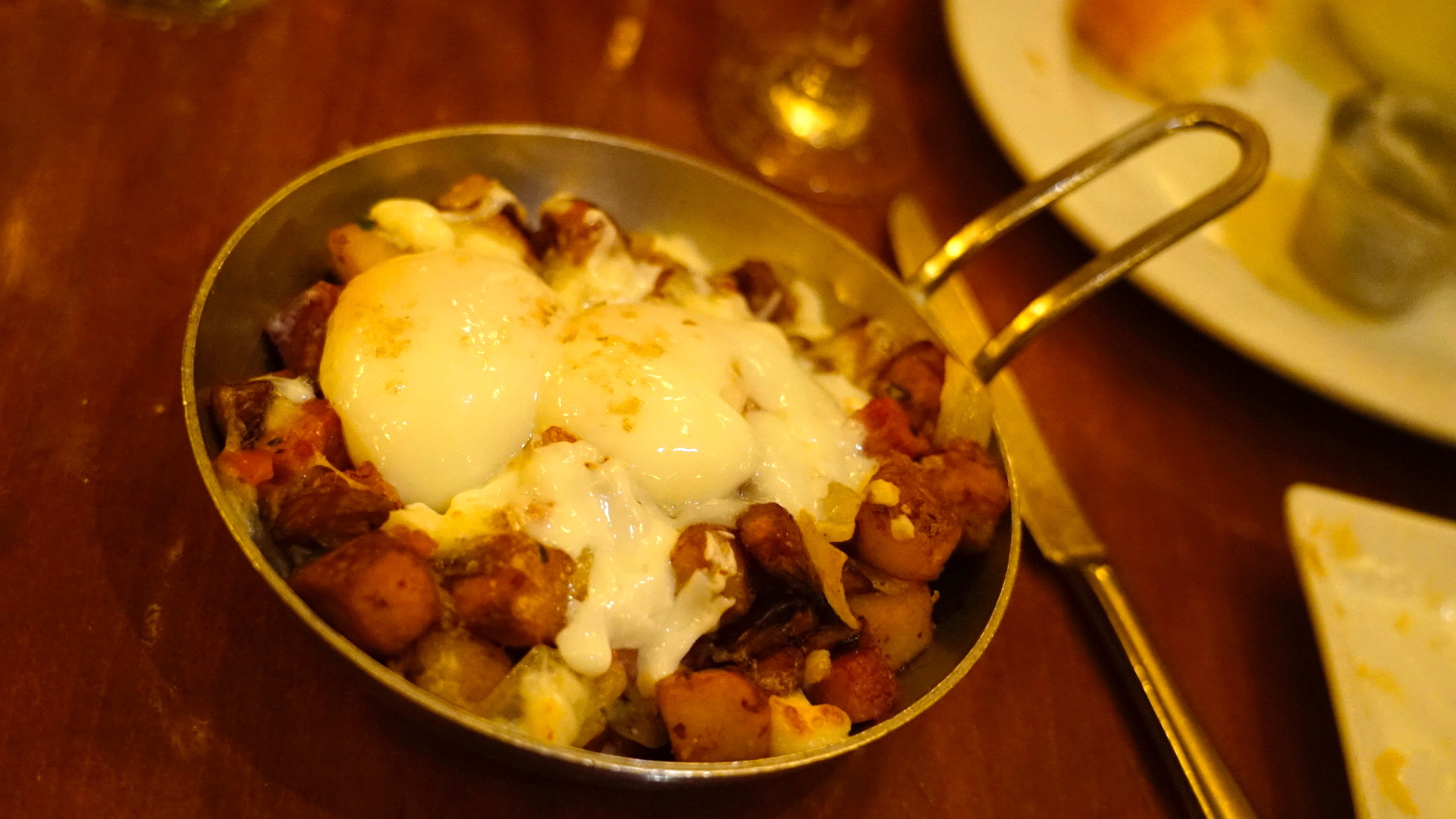 Between the perfectly cooked corned beef and crispy pan-fried potatoes, everything combines with the caramelized sautéed onions and peppers to make a very filling dish in a cute skillet presentation. 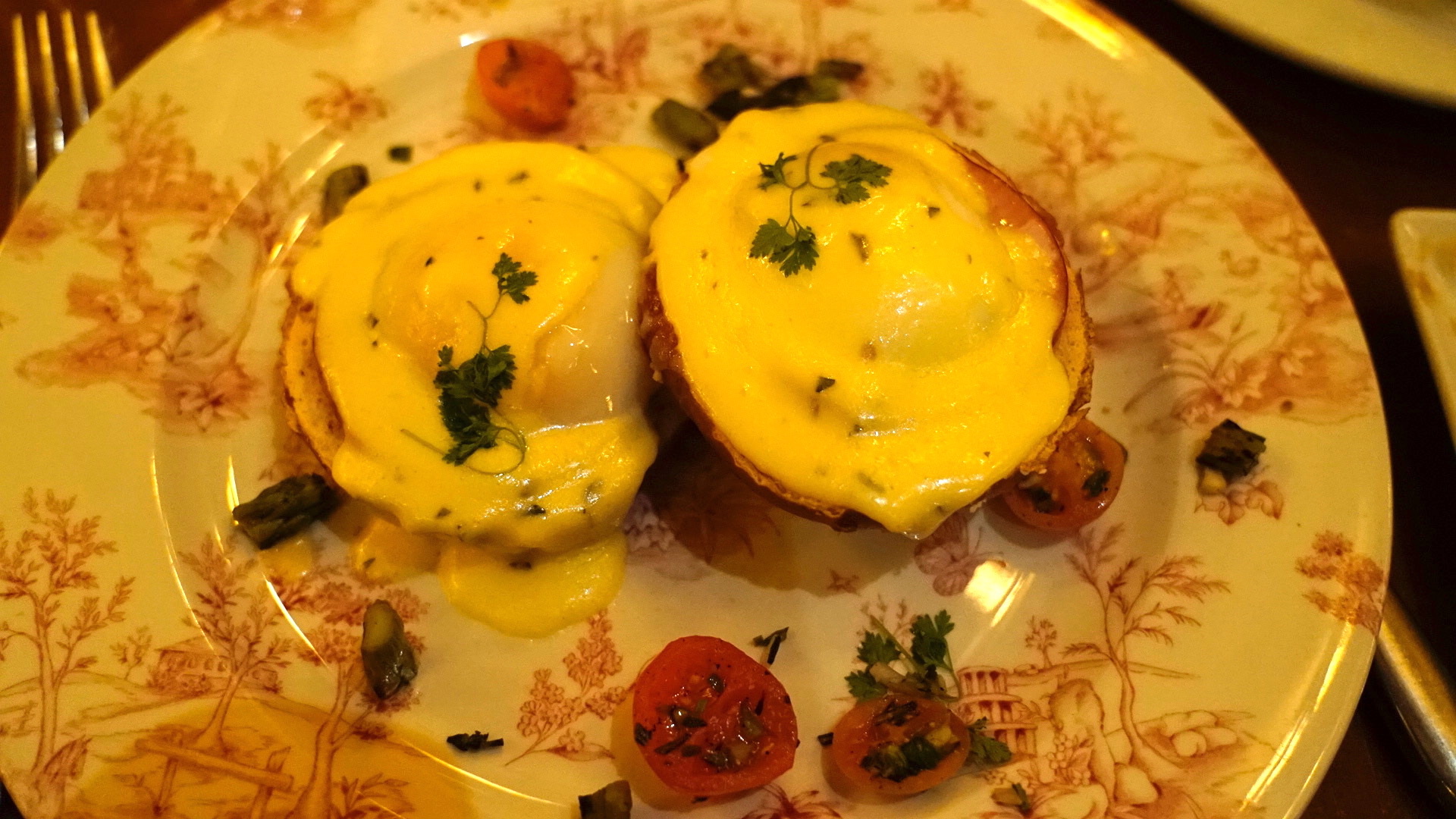 The Eggs Benedict was a solid version of the dish. The pretzel roll as a base here was a great idea, and added a bit of saltiness to the dish, which we liked. 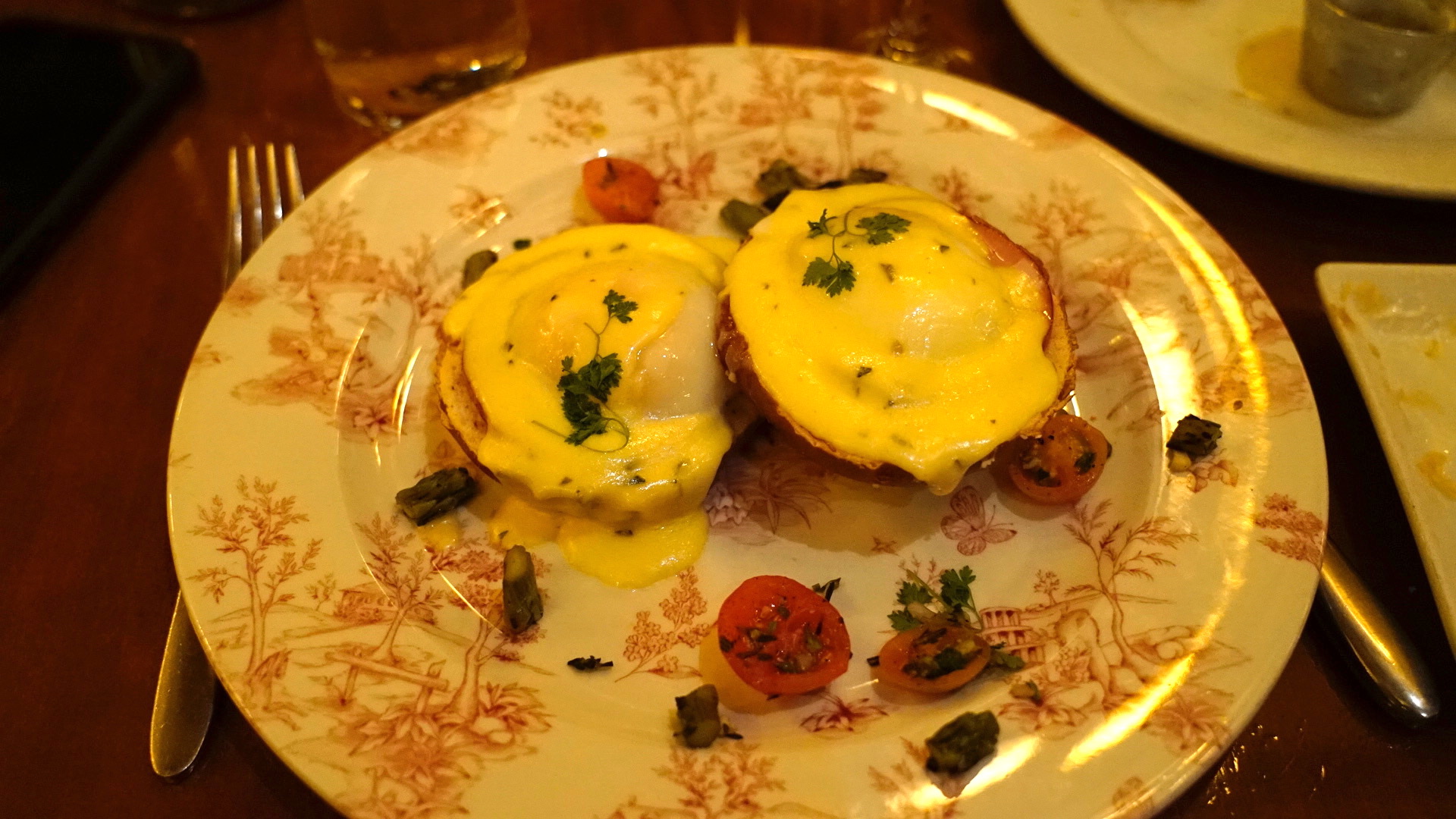 Otherwise, though, there was nothing remarkable about this choice. If you like Eggs Benedict, you’ll like this, but there are better options on the menu. 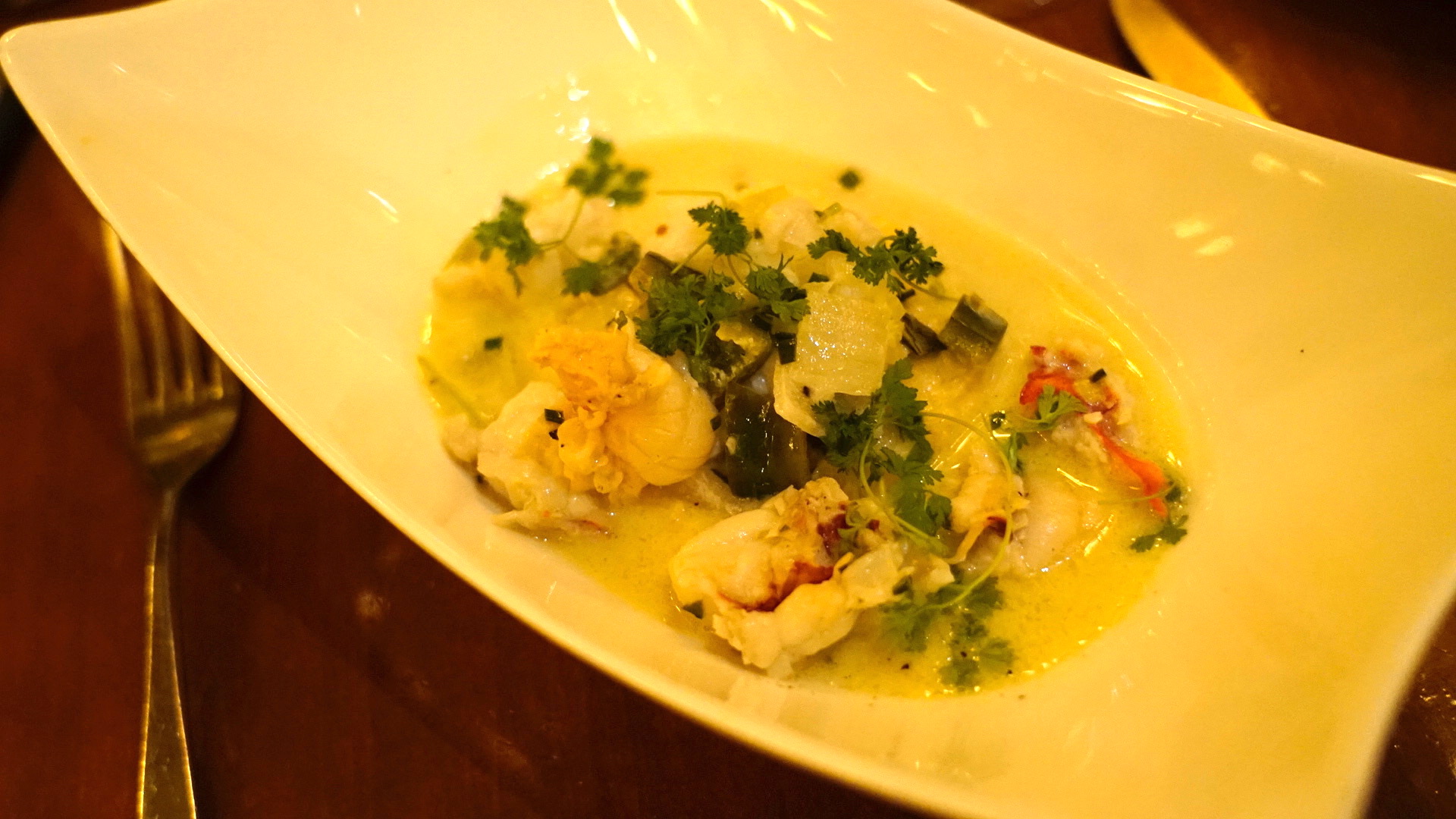 At first we were a little worried when they put the plate down on the table, as it seemed like there was a lot of thin liquid on top of the grits. However, once stirred into the grits, it all wound up being a very good consistency. There was a very decent amount of lobster here, and very well cooked. The grits were also cooked well, and had a nice tangy goat cheese flavor that complemented the lobster. Chunks of al dente onion and green pepper in the grits added both texture and a little flavor, without overpowering the lobster. Those of us who were shrimp and grits fans all loved this, but it wasn’t the top pick of the brunch. Note that if you’re more in the mood for lunch, this is the only non-breakfast item on the entree menu. 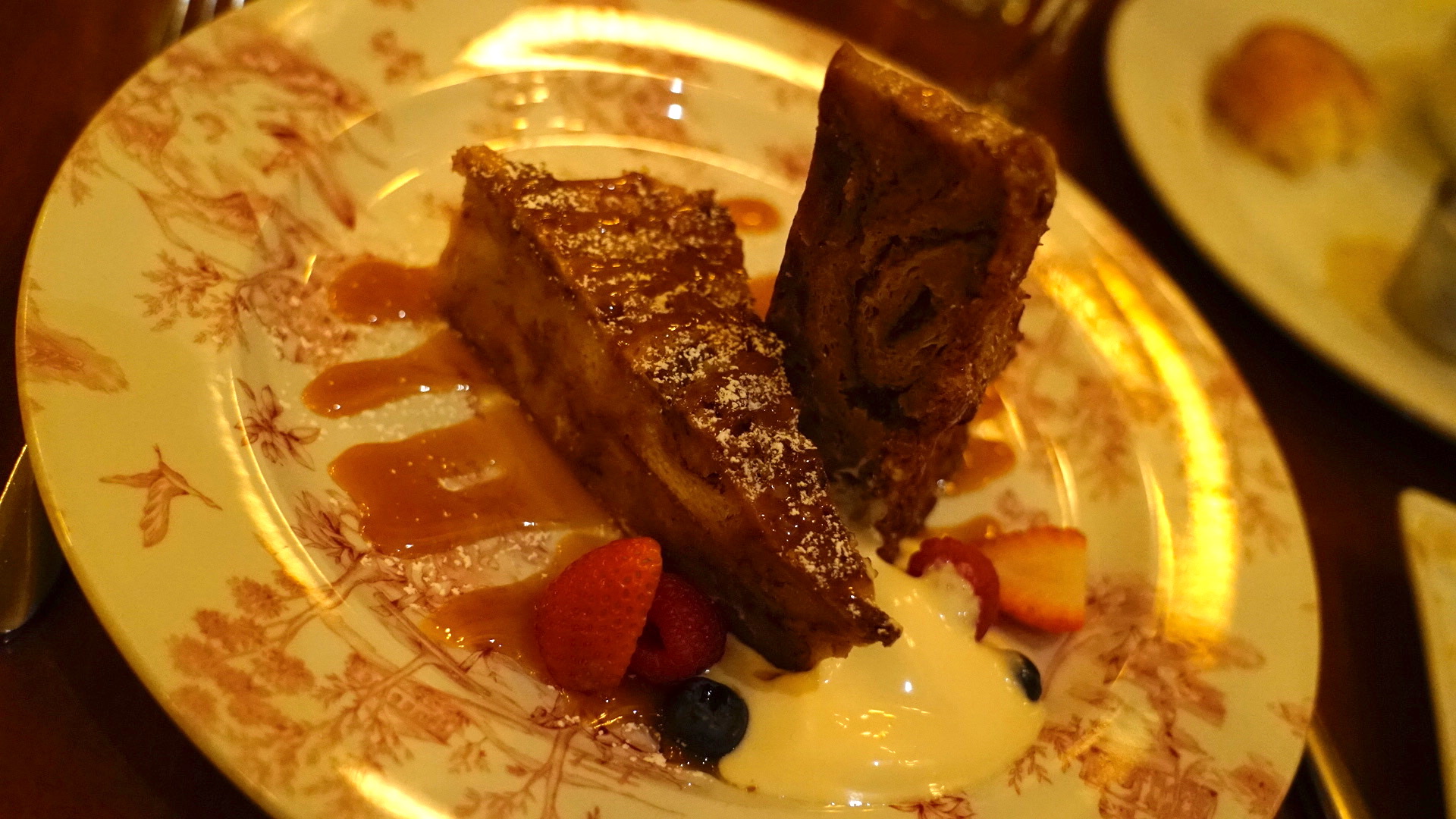 The French toast had a really good consistency. It’s got the flavor and feel of bread pudding, but without being too heavy or dense. With two slices, it’s quite a good serving, especially with appetizer and dessert as part of brunch. If you like sweeter breakfasts, this won’t disappoint, but with dessert after, it might also be a bit much. The bread pudding and hash are also options on the kids menu, as well as Mac and Cheese. 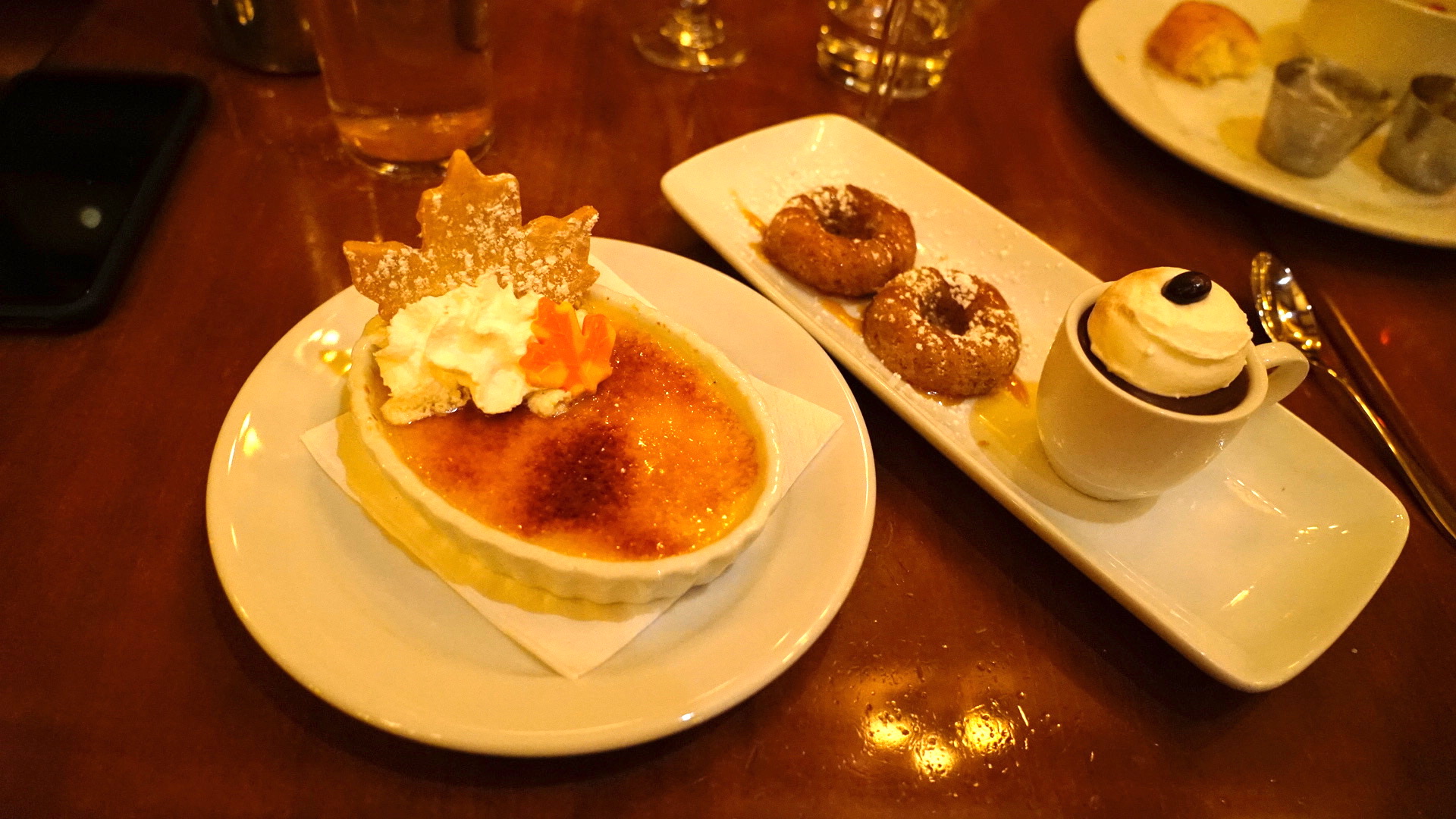 The inclusion of dessert is what sets this brunch apart, as normally things would end at entrees. Having a selection of sweet options at the end of your meal is definitely a nice touch. 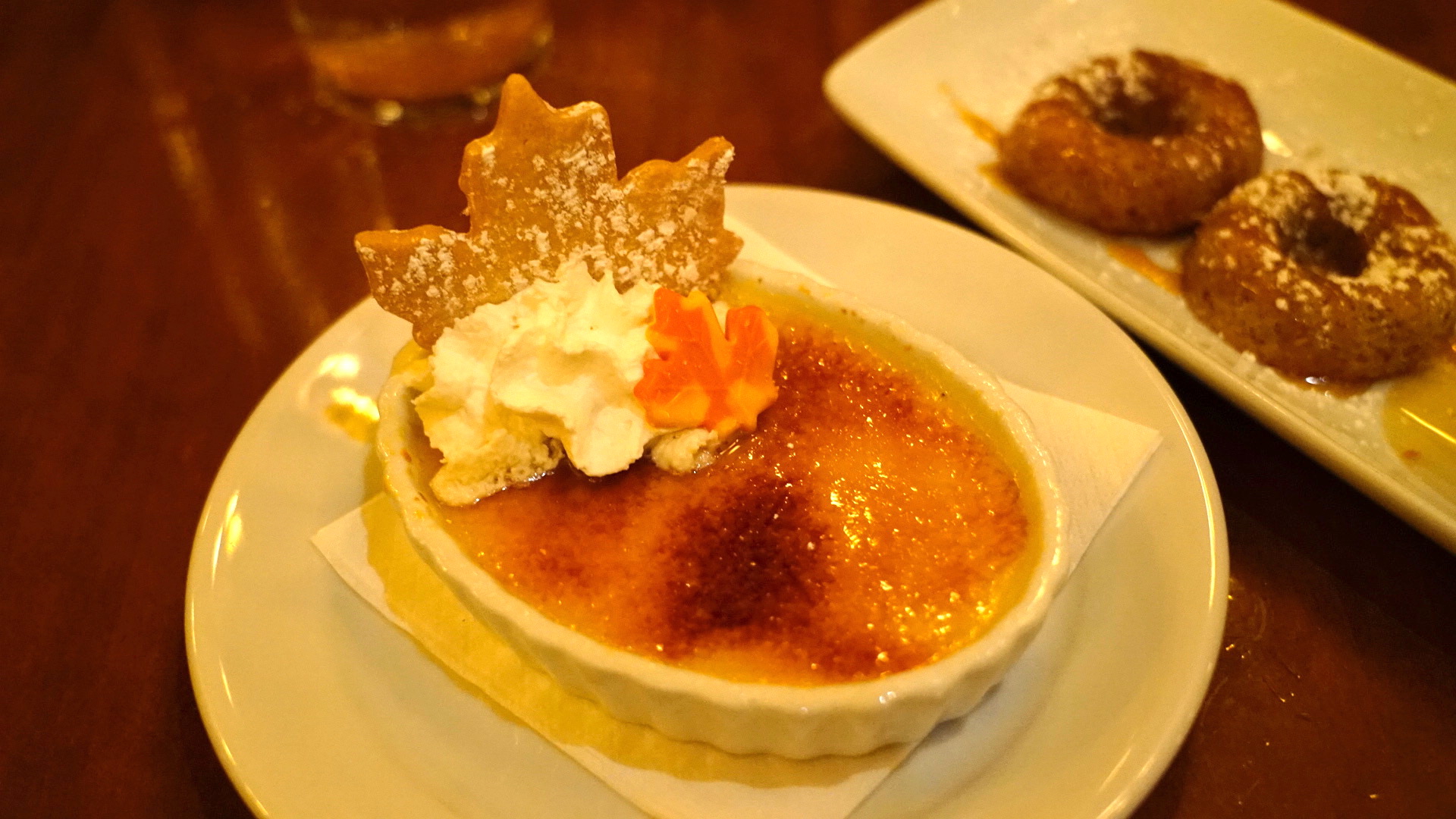 The maple creme brûlée was fantastic. It’s sweet, with an intense maple flavor. It’s topped with pillows of fresh whipped cream and a white chocolate maple leaf, plus a maple shortbread cookie on top. We love a good creme brûlée, and this practically topped everyone’s list. The maple makes it somewhat unique, and the portion size is very generous. 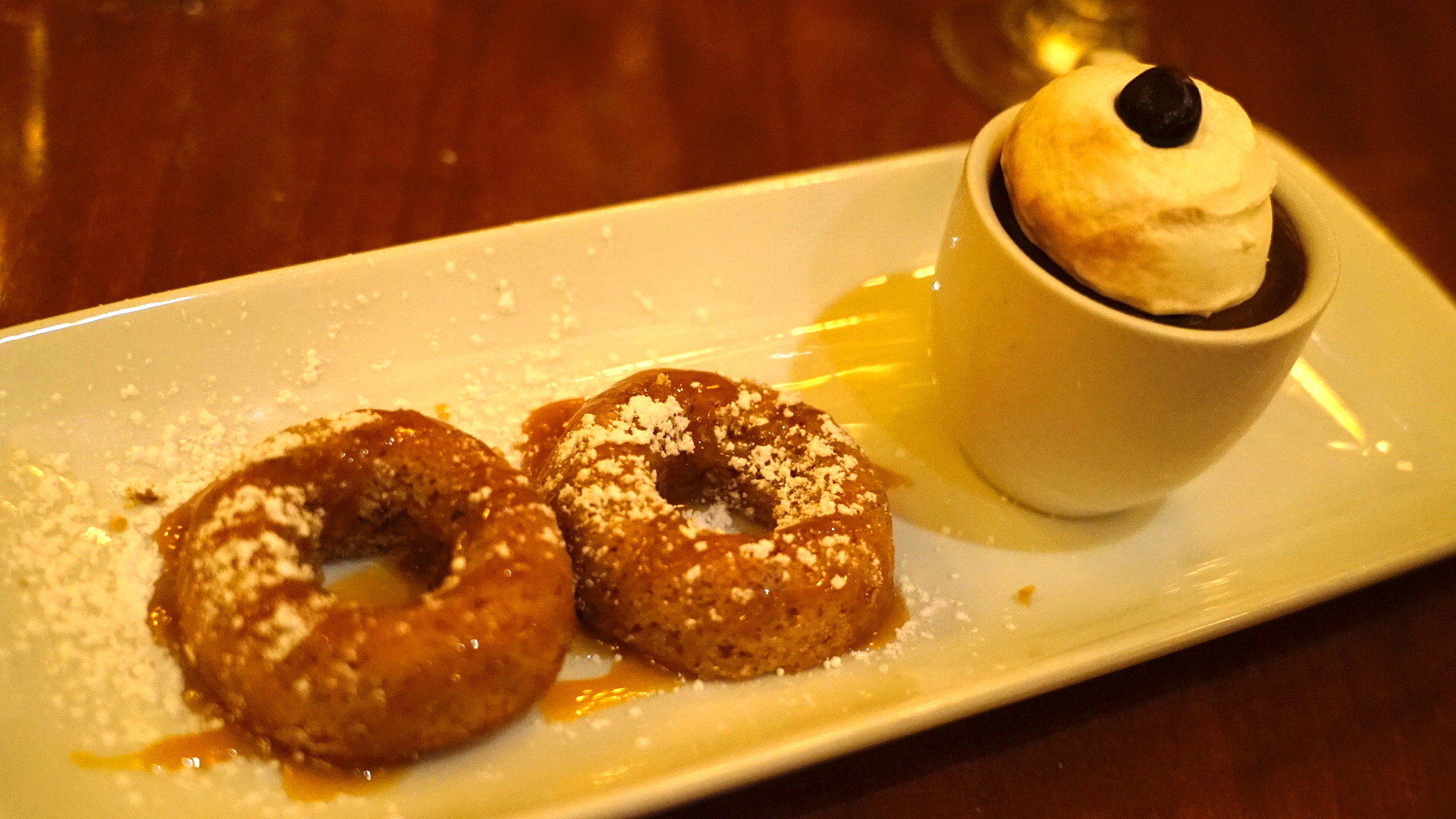 The coffee and donuts dessert was certainly adorable, but the donuts are dry and underwhelming. They’re really more like mini Bundt cakes than donuts, and while the maple sauce compliments them well, it isn’t enough to save them. The chocolate cream, however, is quite good. It’s light and creamy, with a layer of thick ganache on top. You can definitely taste the coffee flavor, but it isn’t overpowering. However, with the bad donuts, it’s not enough to stand on its own.

Overall, we enjoyed this experience, but it is not without its setbacks. The four courses are very filling, but for $67, it should be. It’s a solid meal, but still a stretch to find the value for the price point. If you have Tables in Wonderland, it makes it a better value, but otherwise, you’re better doing breakfast or lunch elsewhere on property.

You have an excellent Character Breakfast at Topolino’s Terrace (in Disney’s Riviera Resort) for less, and one of the options is a massive, delicious steak dish. This being a steakhouse, we were all somewhat surprised that there wasn’t a traditional steak and eggs entree option. Meanwhile, other items like the French Toast don’t make much sense, given the inclusion of desserts. Most of the stand-out items are available on the regular menu, and we wouldn’t hesitate to recommend a casual lunch or dinner here any time you’re in EPCOT. (You can check out our amazing Le Cellier review for lunch and dinner here.)

In a positive light, service was very kind and attentive. They even offered us a second alcoholic drink to celebrate their first day of the new brunch menu. We all thought it would be a great idea for Le Cellier to offer breakfast from 9-11 every day. It would add another good table service breakfast option in EPCOT, especially if they turned the lights up a notch. However, as far as brunch goes, it was slightly overpriced, and the fact that you can’t get a cup of coffee along with the alcoholic drink seems like far more red tape than anyone is willing to endure at 10:00 AM while on vacation.

If you’re still looking to try this out, while reservations are recommended, the restaurant wasn’t full, with at least 10 tables open at any given time. The whole meal took us two hours at a leisurely pace. The table next to us was in a hurry, and they were out in about an hour and 20 minutes. That being said, we suggest allotting at least an hour and a half for this brunch experience.

If you don’t have Tables in Wonderland, they do take Annual Passholder and DVC Member discounts for 10% off the total of your meal.