Bright suns from Disney’s Hollywood Studios! We’re out and about in Batuu, Hollywood and all points in between. That’s a lot of distance to cover, so let’s get going! 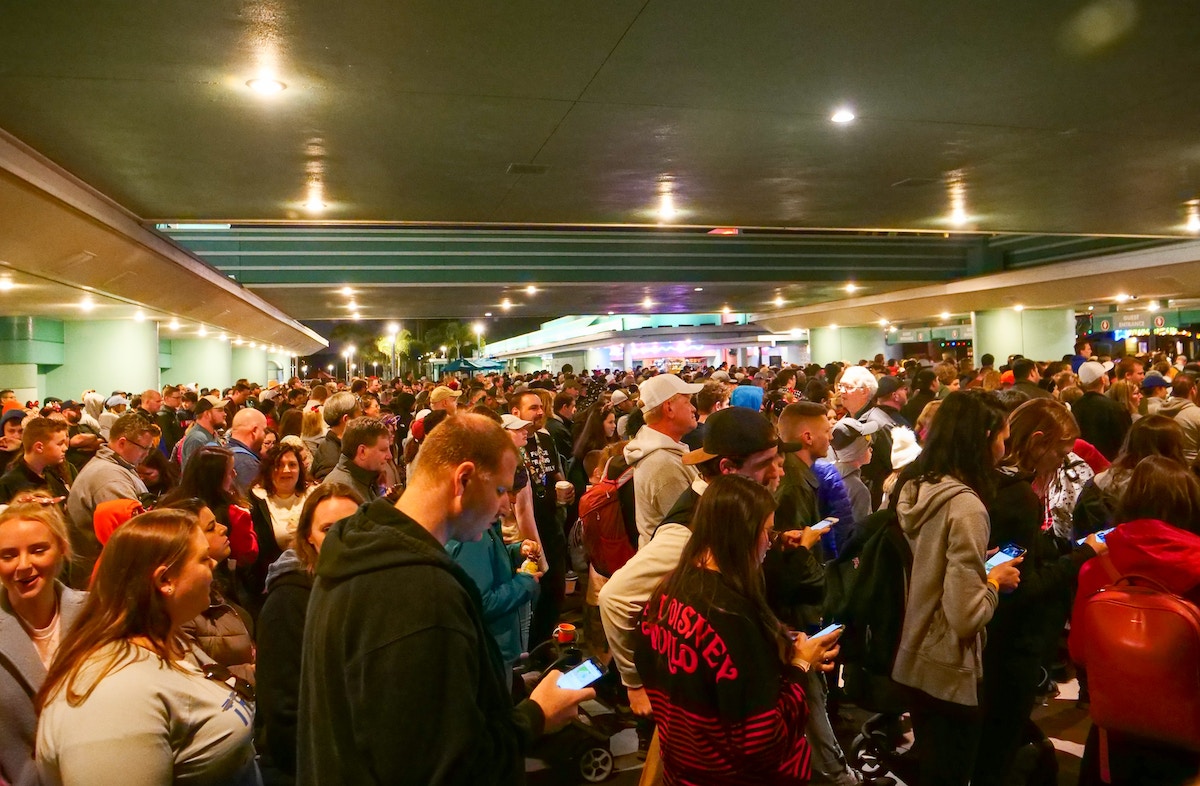 It’s hard to discuss Disney’s Hollywood Studios without taking note of crowd levels. As expected, guests are packed-in waiting to move through the touch points at park opening. 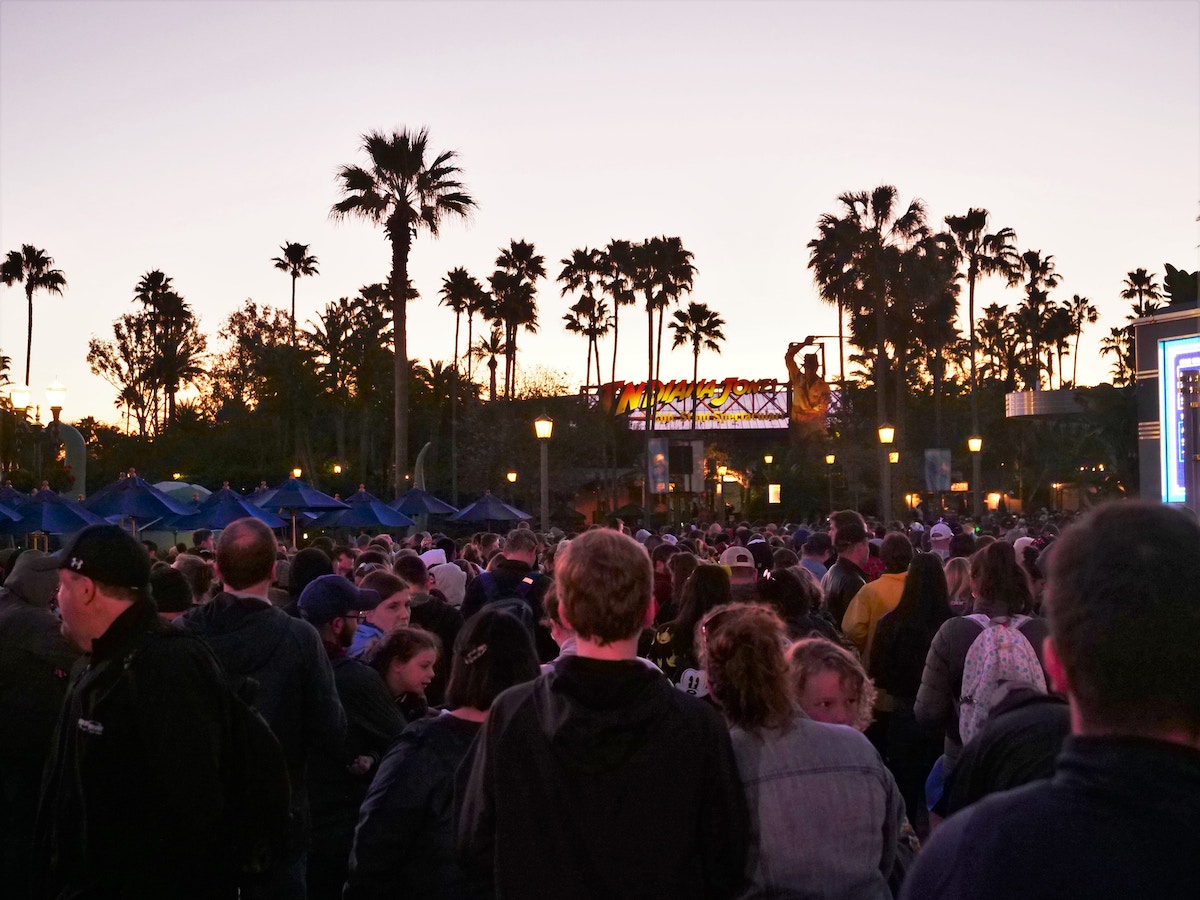 Inside the park, guests are lined up to visit Black Spire Outpost right at 7:01 a.m., with that first minute of the seven o’clock hour dedicated to battling for a Star Wars: Rise of the Resistance boarding group. 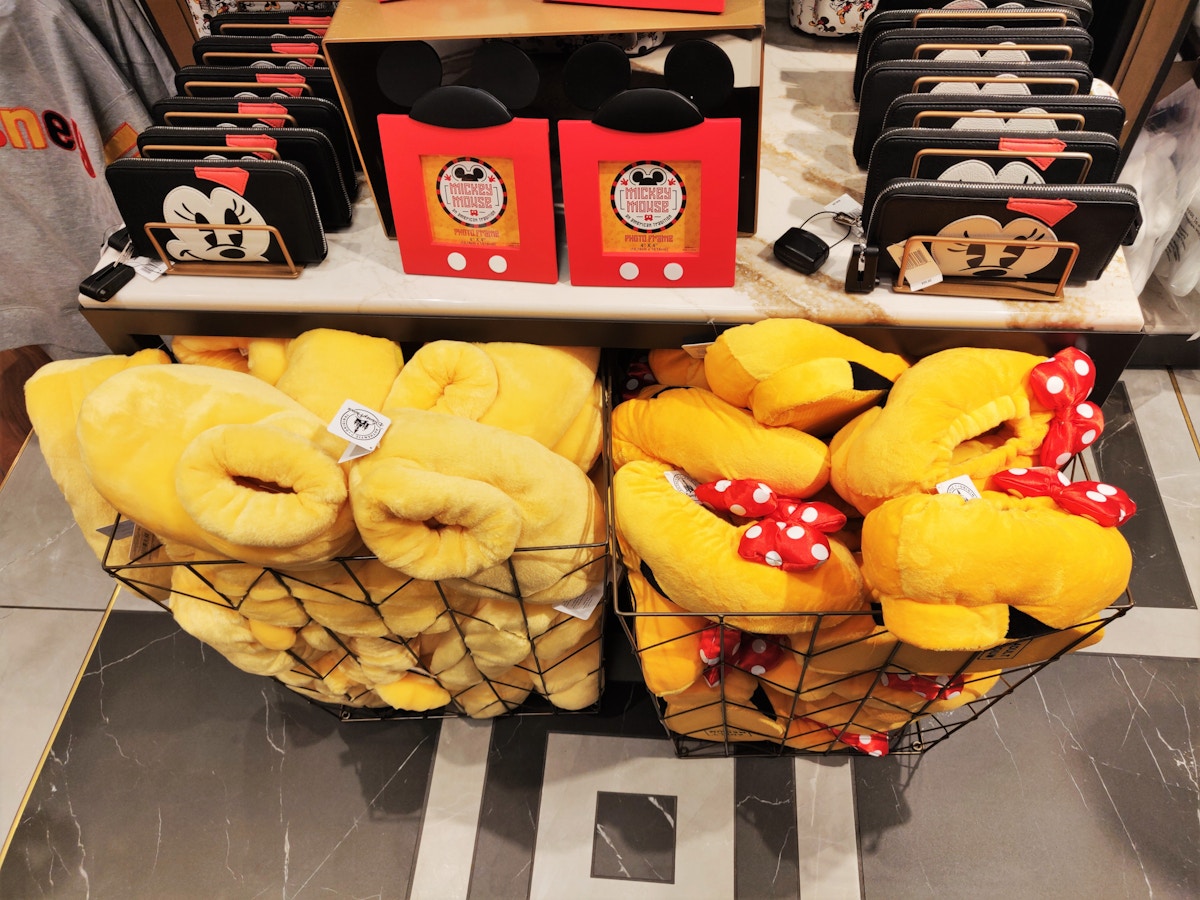 It’s a pretty chilly day here at Disney’s Hollywood Studios. While we wouldn’t suggest wearing these slippers throughout a day in the park, they would be pretty nice for relaxing at home! These are available at Mickey’s of Hollywood in both Mickey and Minnie styles. 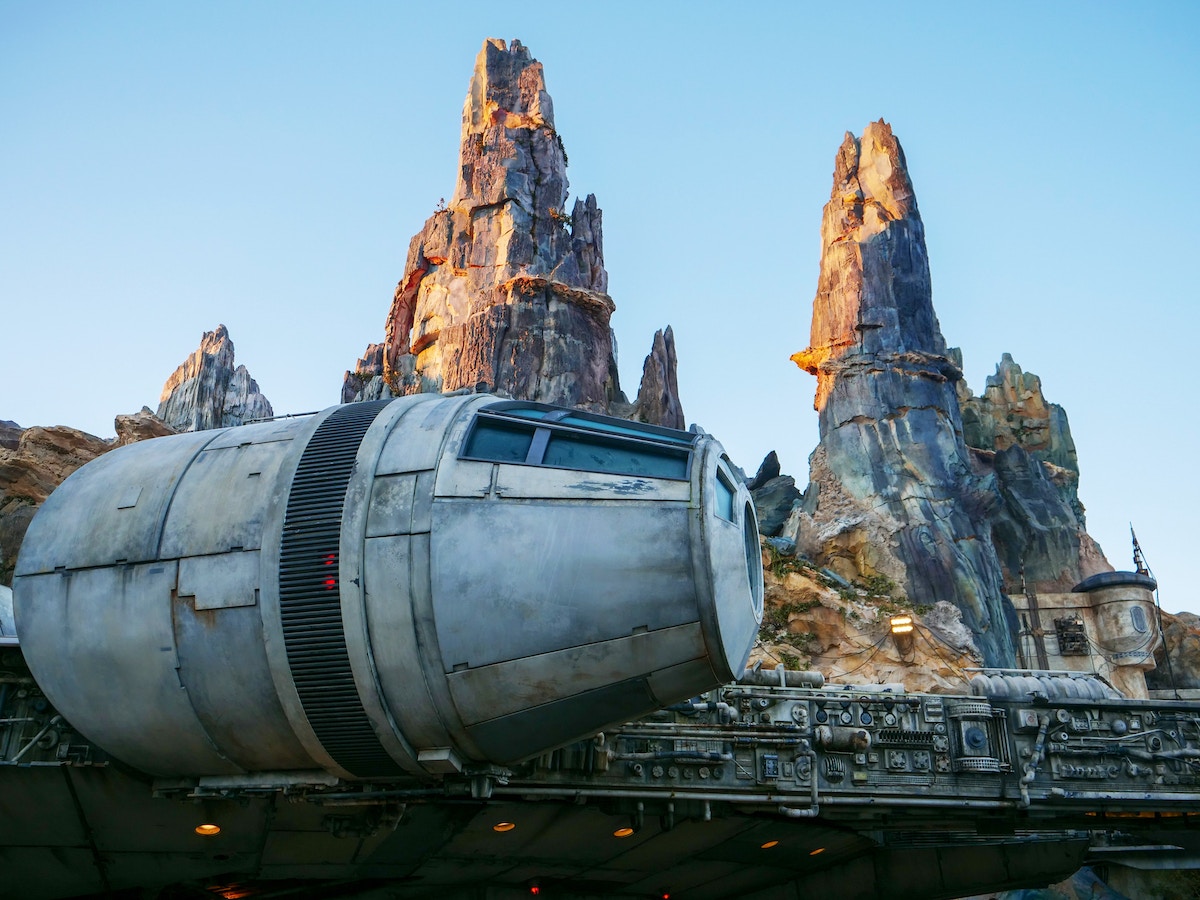 In a galaxy far, far away, we’ve come across the Millennium Falcon — with the sun beginning to show on the namesake spires of Black Spire Outpost. 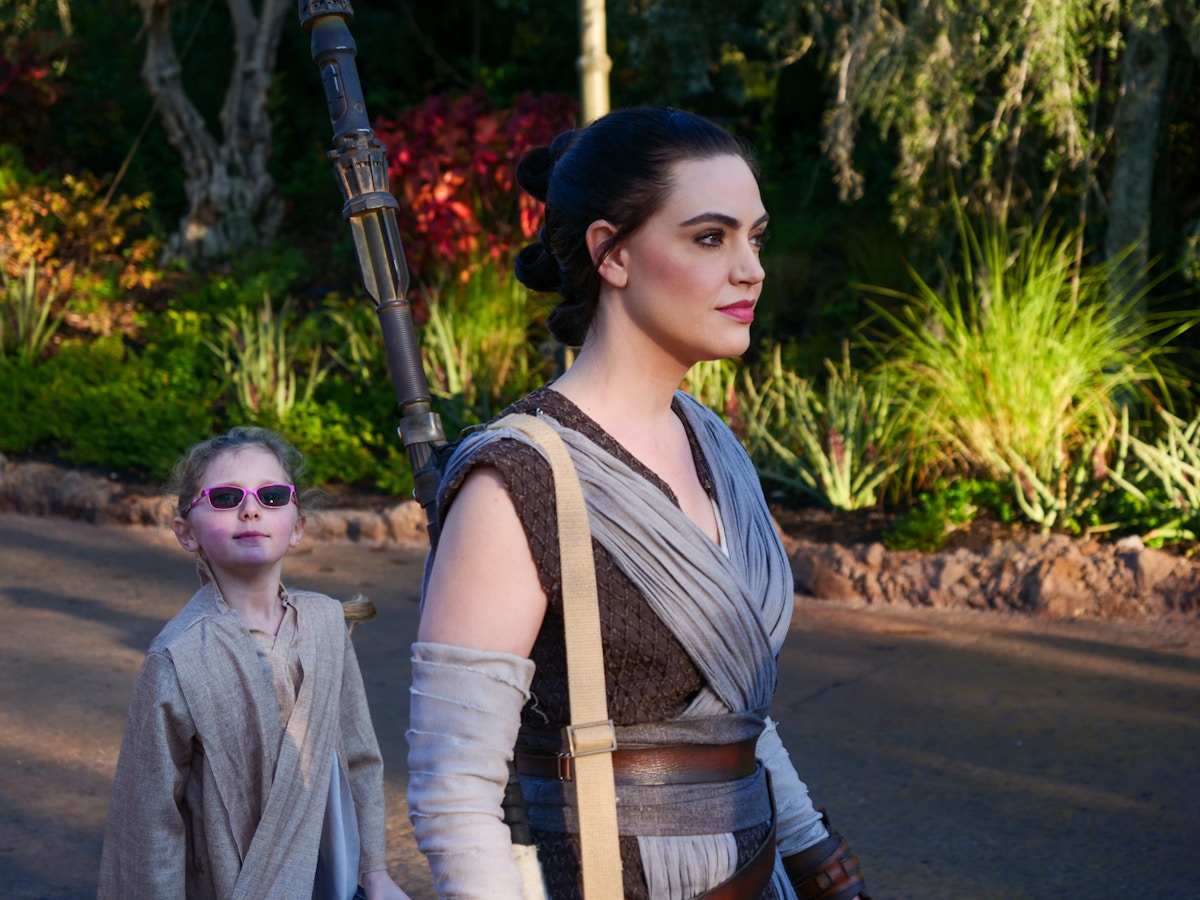 We also came across Rey, who was trailed by an adoring fan (or perhaps an aspiring Jedi). Don’t tell the First Order they were here! 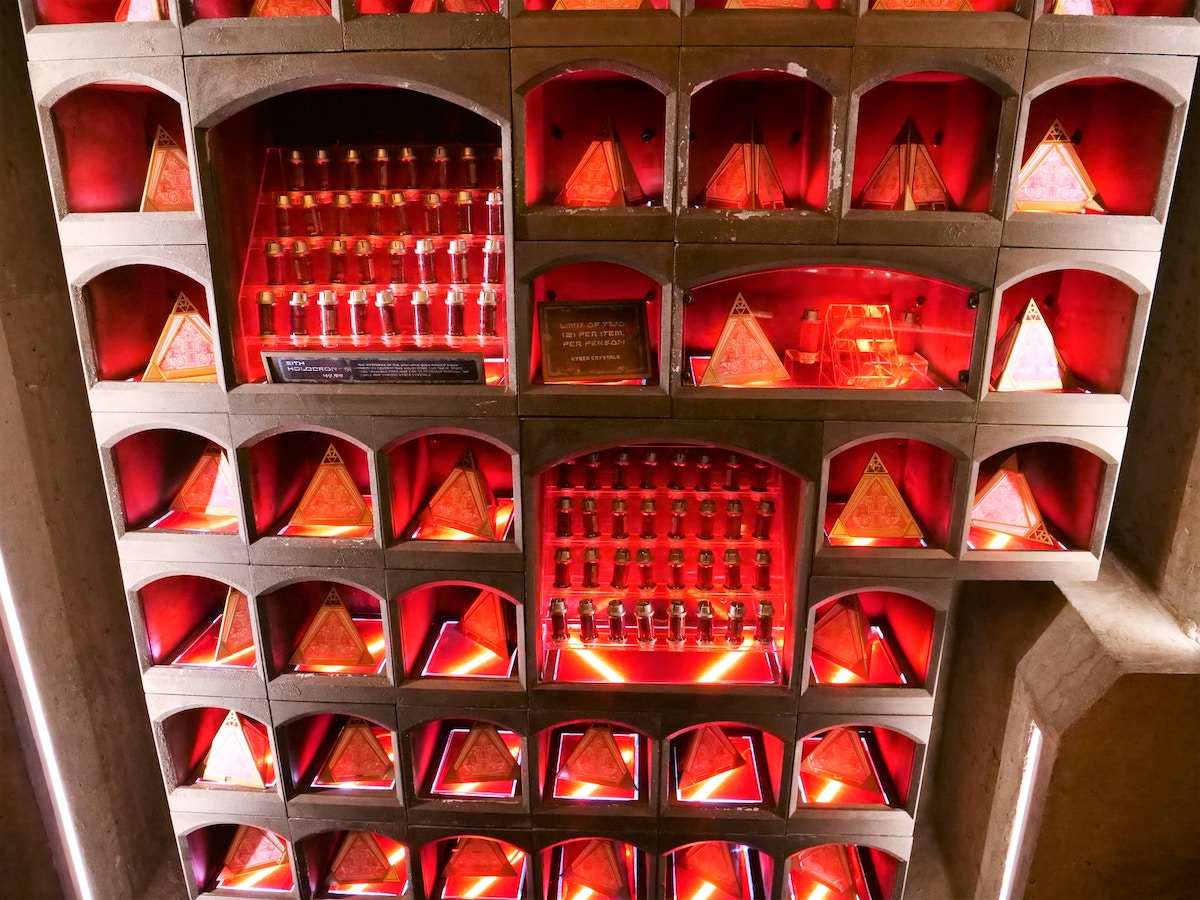 At Dok-Ondar’s Den of Antiquities, the red Kyber Crystals in packaged form have returned to the shelves. 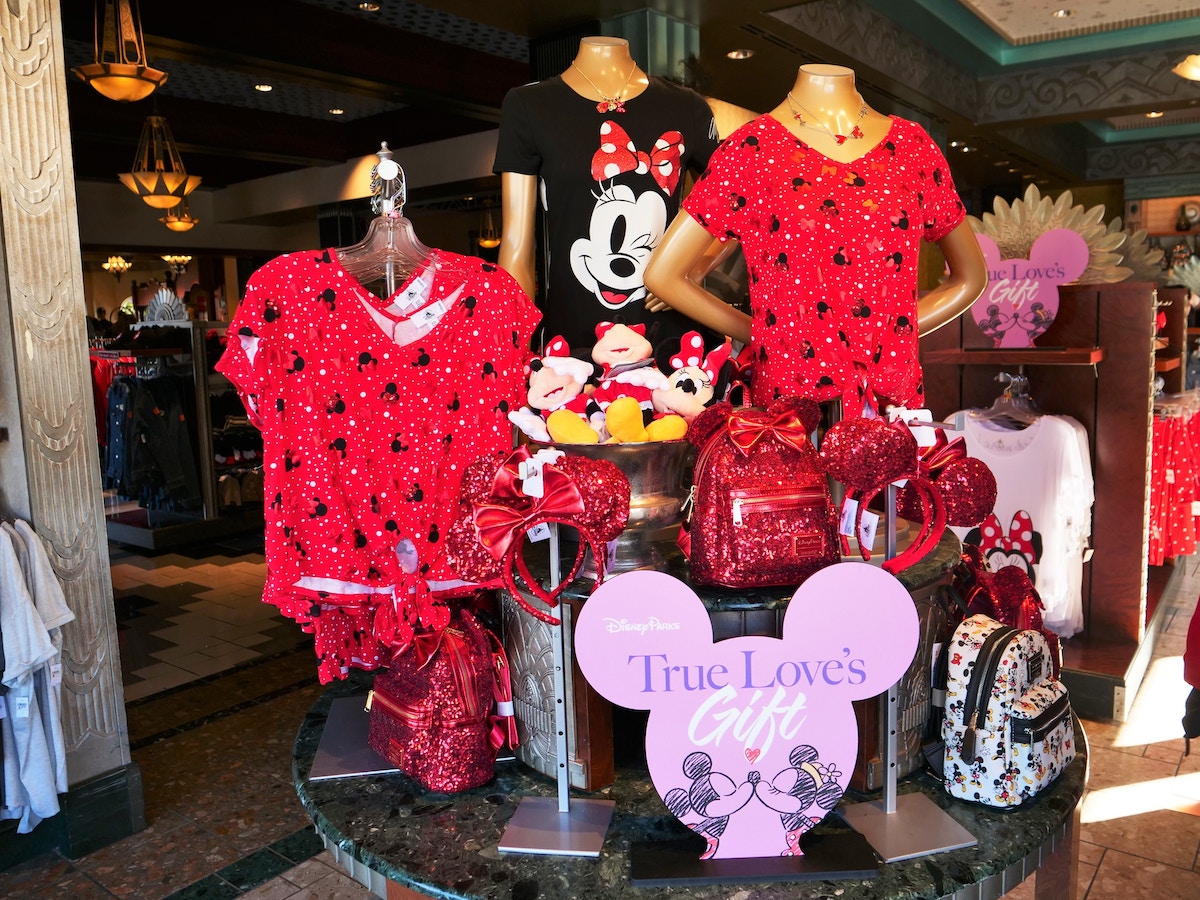 Speaking of red, we’re less than one week away from Valentine’s Day. Disney has provided a display of suggested gifts at Sunset Club Couture under the title “True Love’s Gift.” 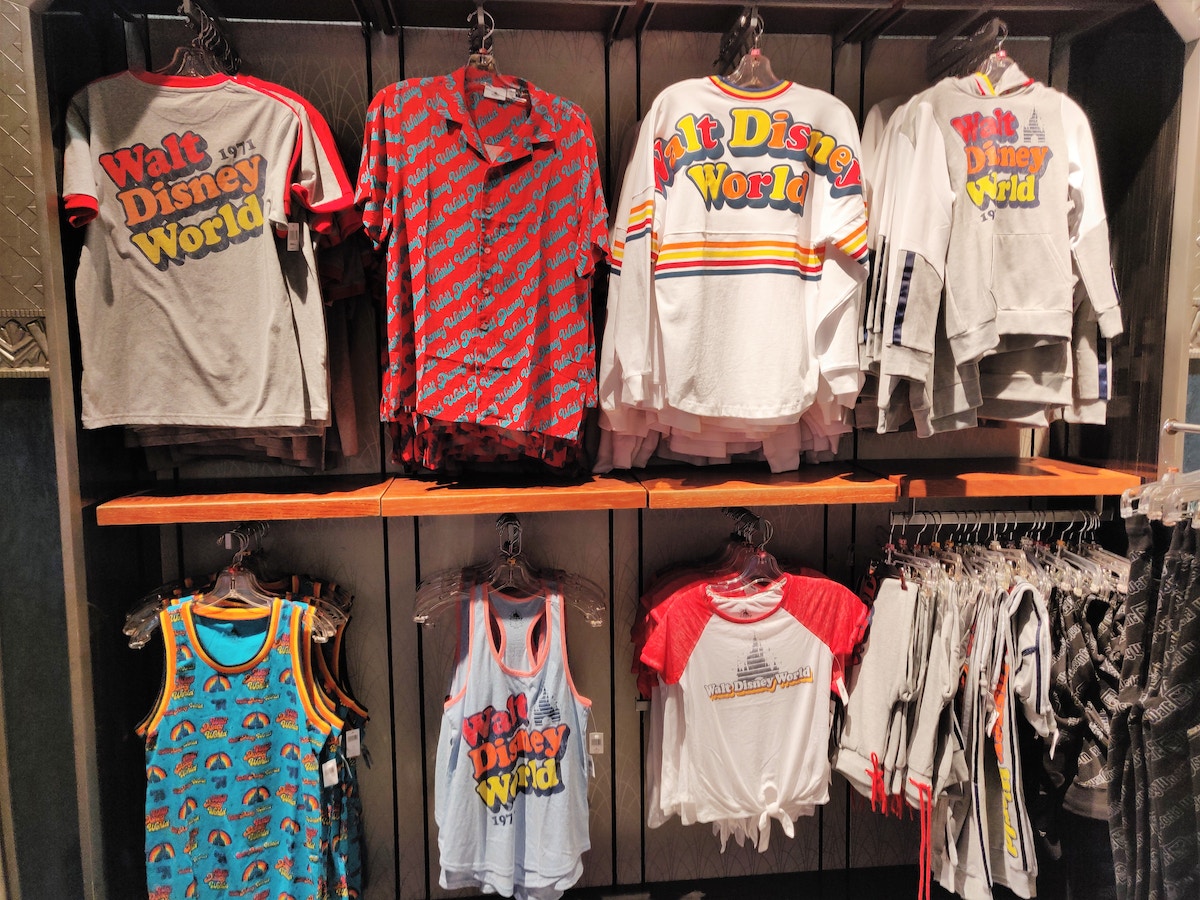 In the next building over at Sunset Club Couture, the retro line of Walt Disney World apparel has quickly grown. For more photos and details on items in this line, check out our posts on the 1971 spirit jersey and the entire retro collection when it landed at Disneyland. 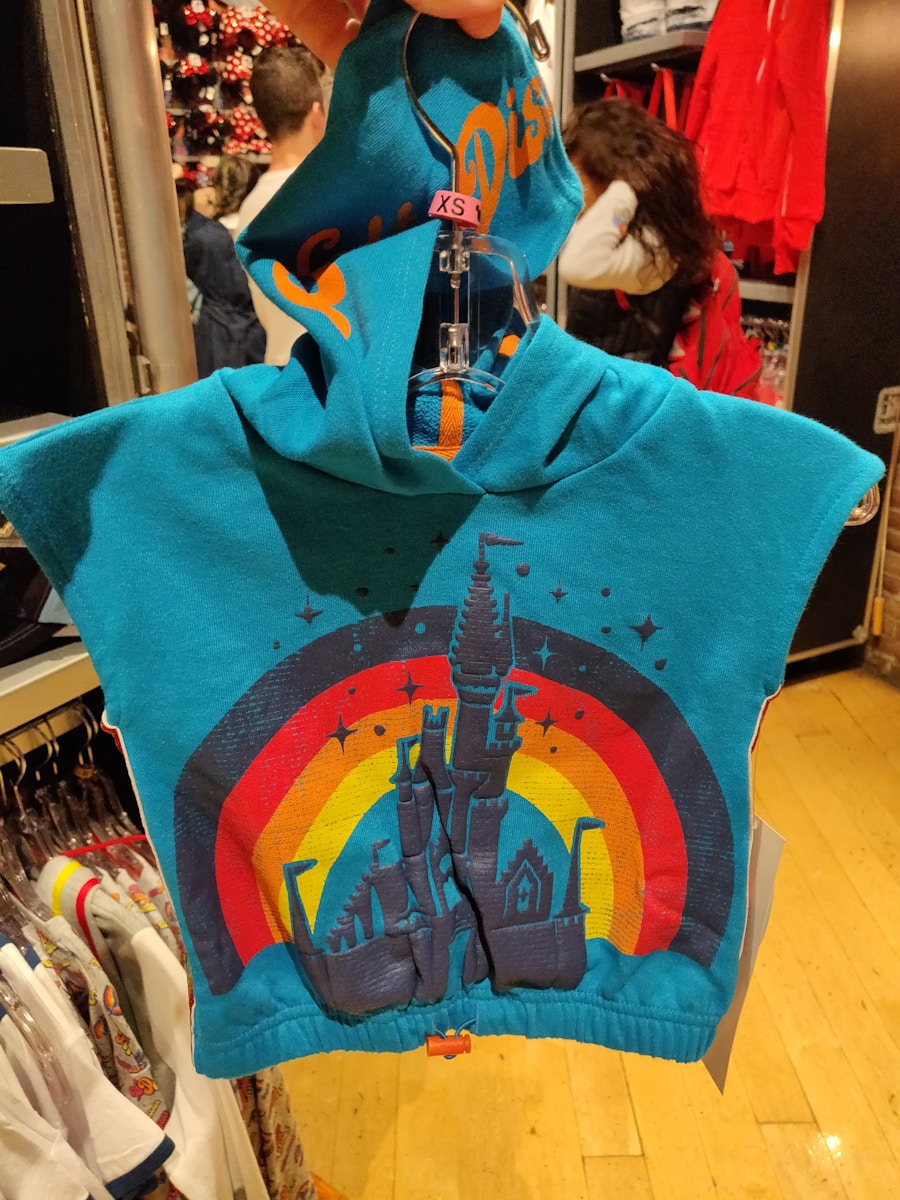 Even further down Sunset Boulevard, this sleeveless retro kid’s hoodie is a great option to add a layer to a youngling on an unexpectedly cold and breezy day. This particular one was found at Rock Around the Shop, the gift shop at the exit of Rock ‘n’ Roller Coaster Starring Aerosmith. 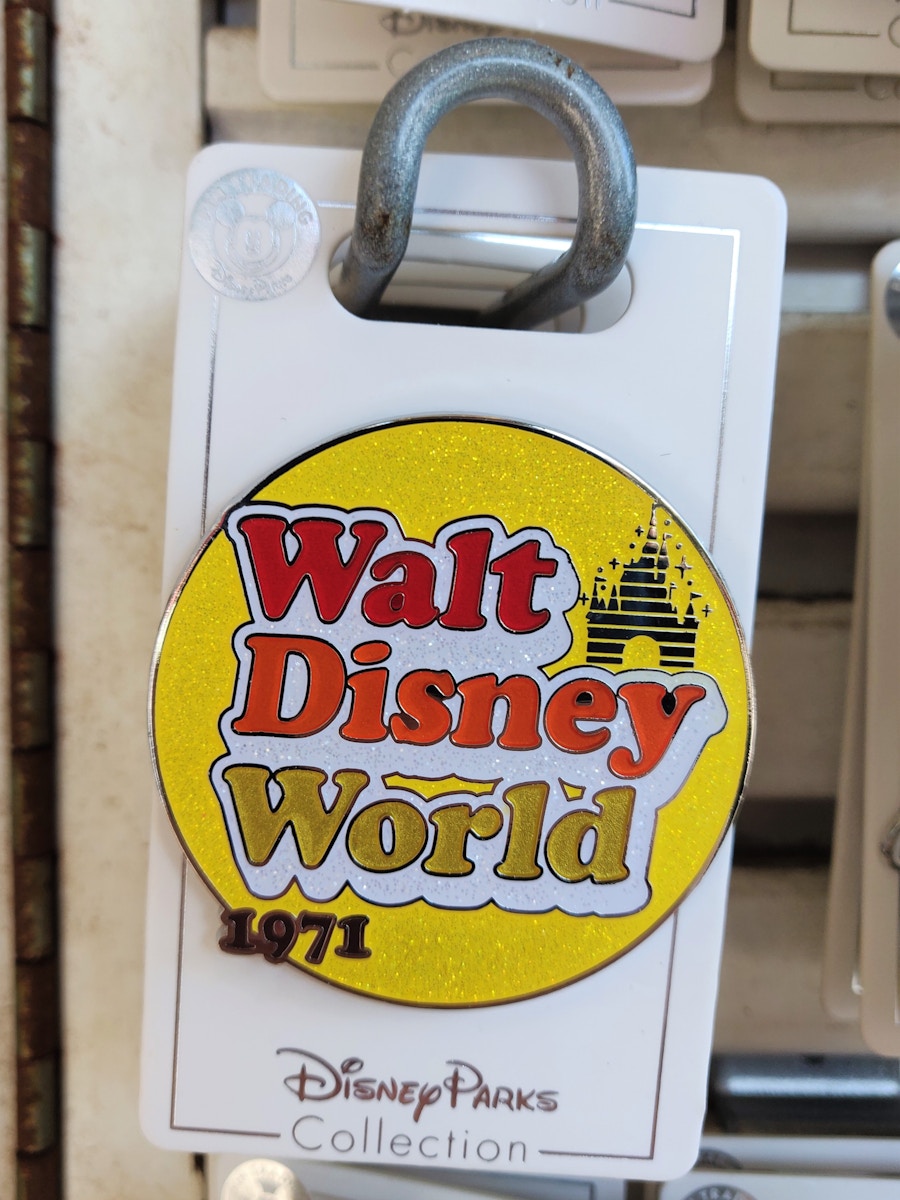 If you’re looking to round out the retro look, don’t miss this Walt Disney World 1971 pin. It’s currently available at the Crossroads of the World, the island store that will likely be the first thing you see when entering Disney’s Hollywood Studios. 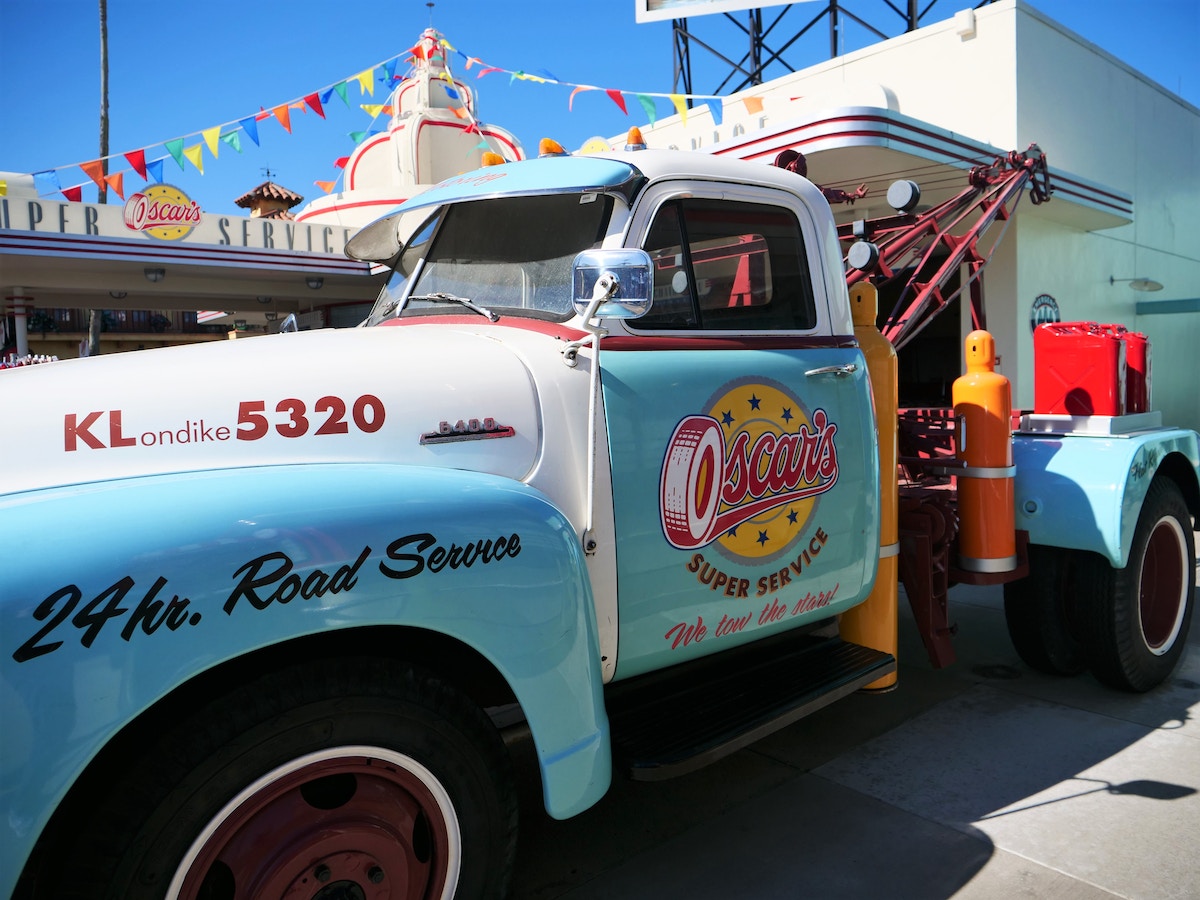 Having trouble finding Crossroads of the World? Look for this Oscar’s Super Service truck — it’s pointing right at the store! 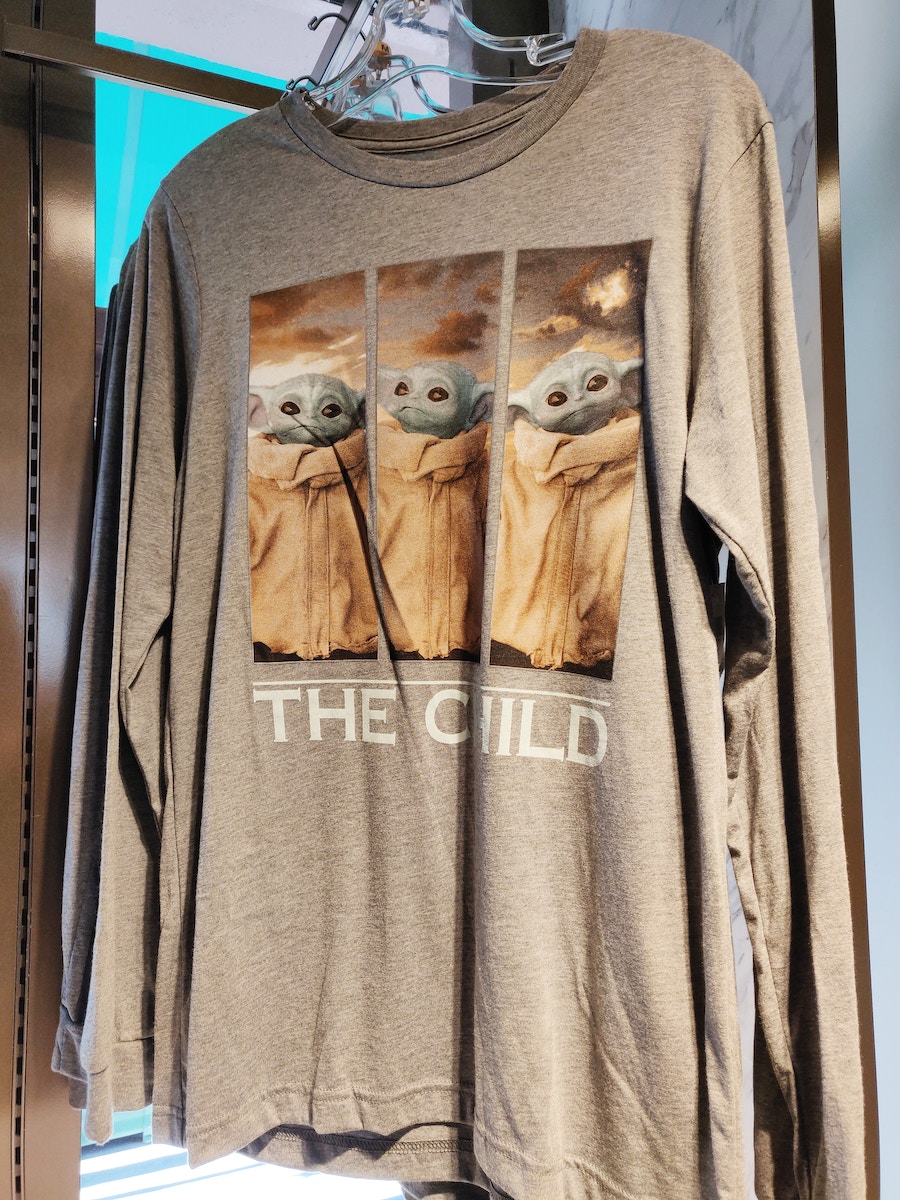 If retro isn’t your style and you’d rather wear the most modern and in-demand clothing instead, then Baby Yoda apparel is the only way to go. This long sleeve tee is a great option and is part of a larger collection available at Keystone Clothiers. 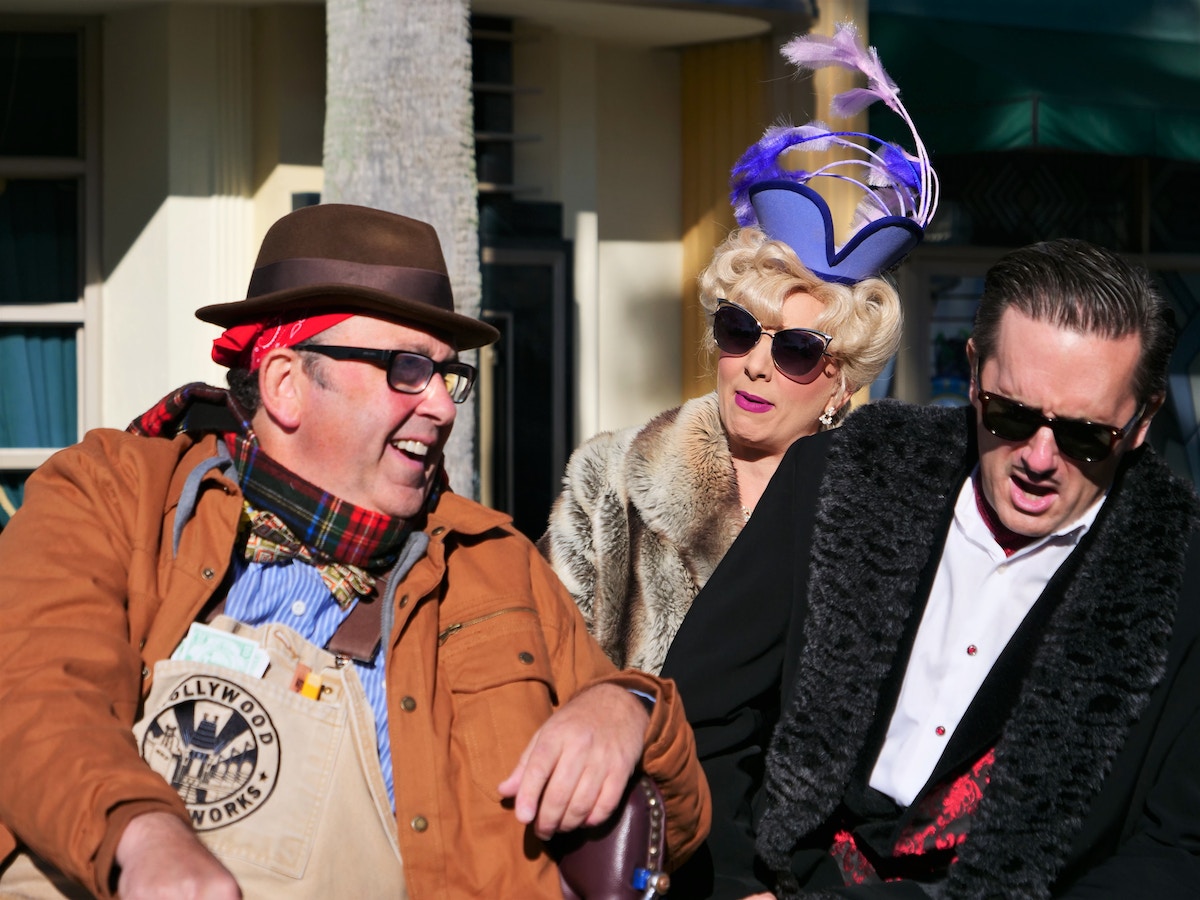 Finally, on our way out, we were able to catch some hilarious actors on Hollywood Boulevard. Here we can see a reaction to a bad joke, but aren’t bad jokes the best jokes sometimes? Disney’s Hollywood Studios arguably has some of the best streemosphere of all the parks.

Thanks for joining us on our tour of the park! Will you make a visit to Disney’s Hollywood Studios in the near future? Let us know in the comments, along with what attractions you’re most excited for!

Previous
“The Mandalorian” Returns For Season Two This October on Disney+