Hello from a chilly, wet, and extremely windy Disney’s Hollywood Studios! Despite the less than perfect weather, we’re touring the park and bringing you all of the news and updates it has to offer. Let’s get rolling! 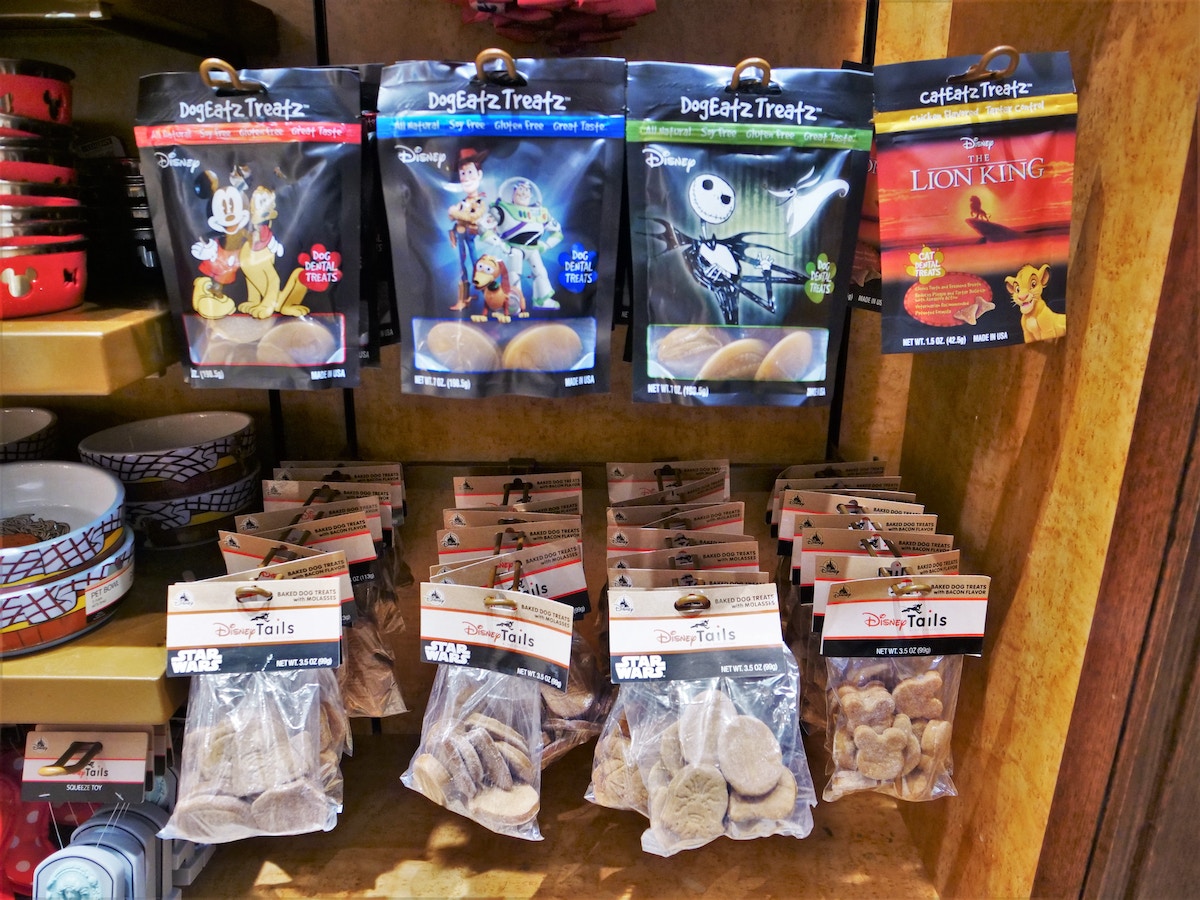 Inside the park, we spotted these new pet treats at The Darkroom. The treats are themed after different famous Disney animals – canines and felines, in this case. 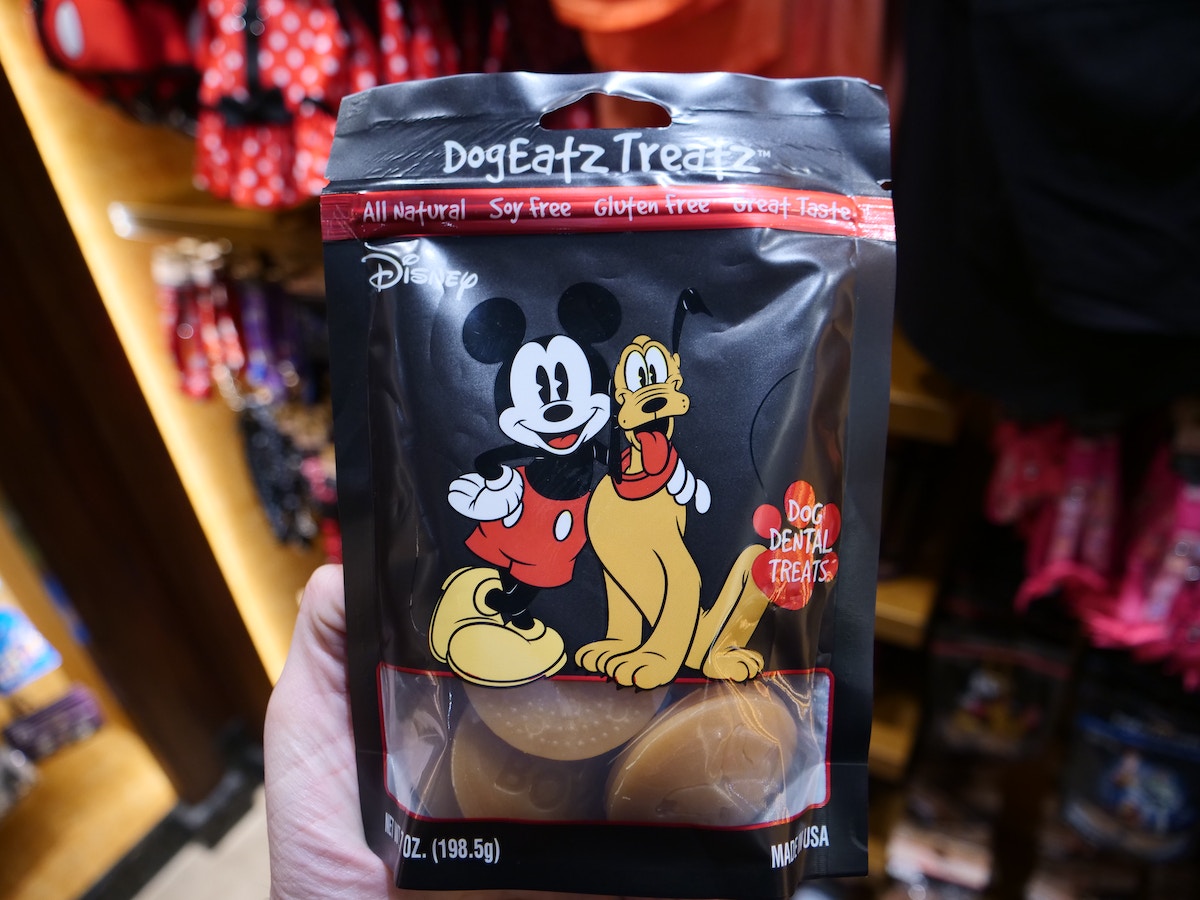 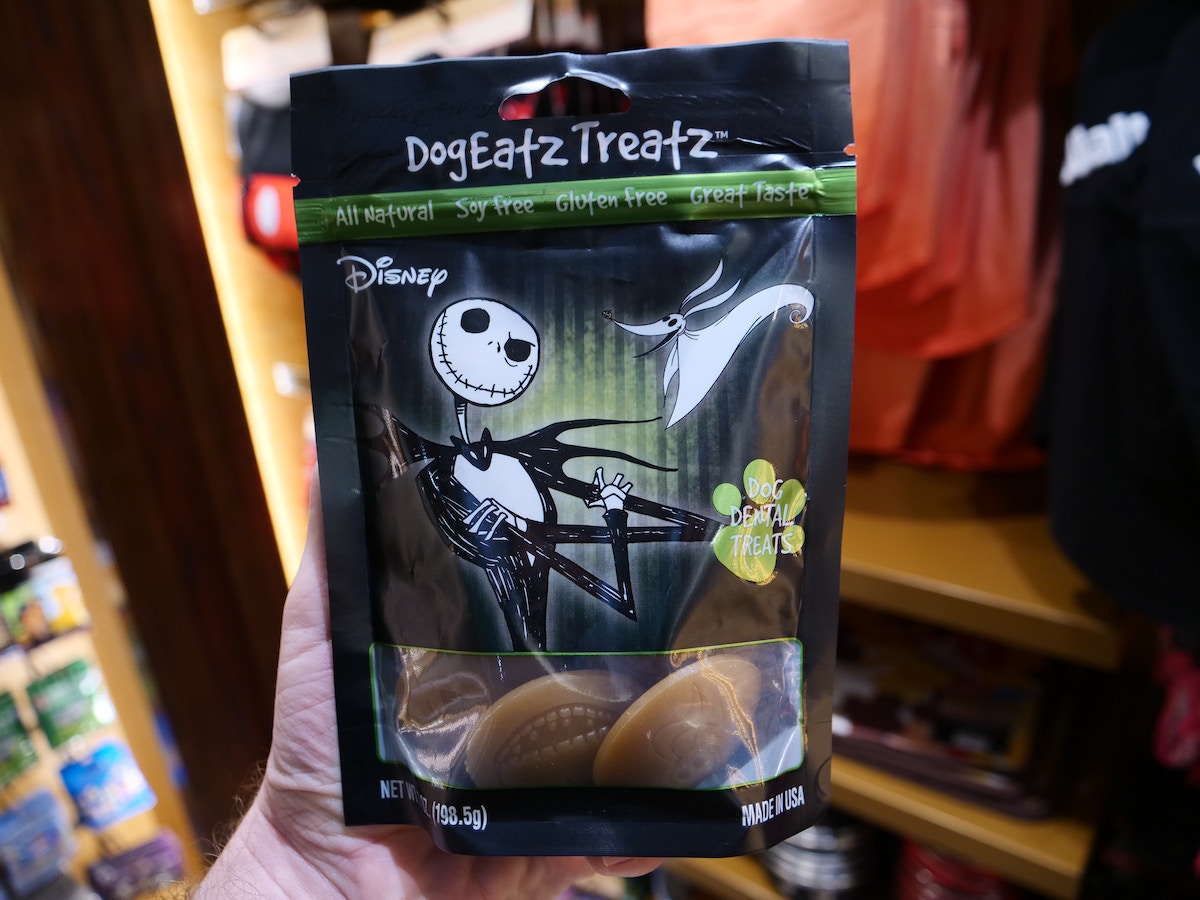 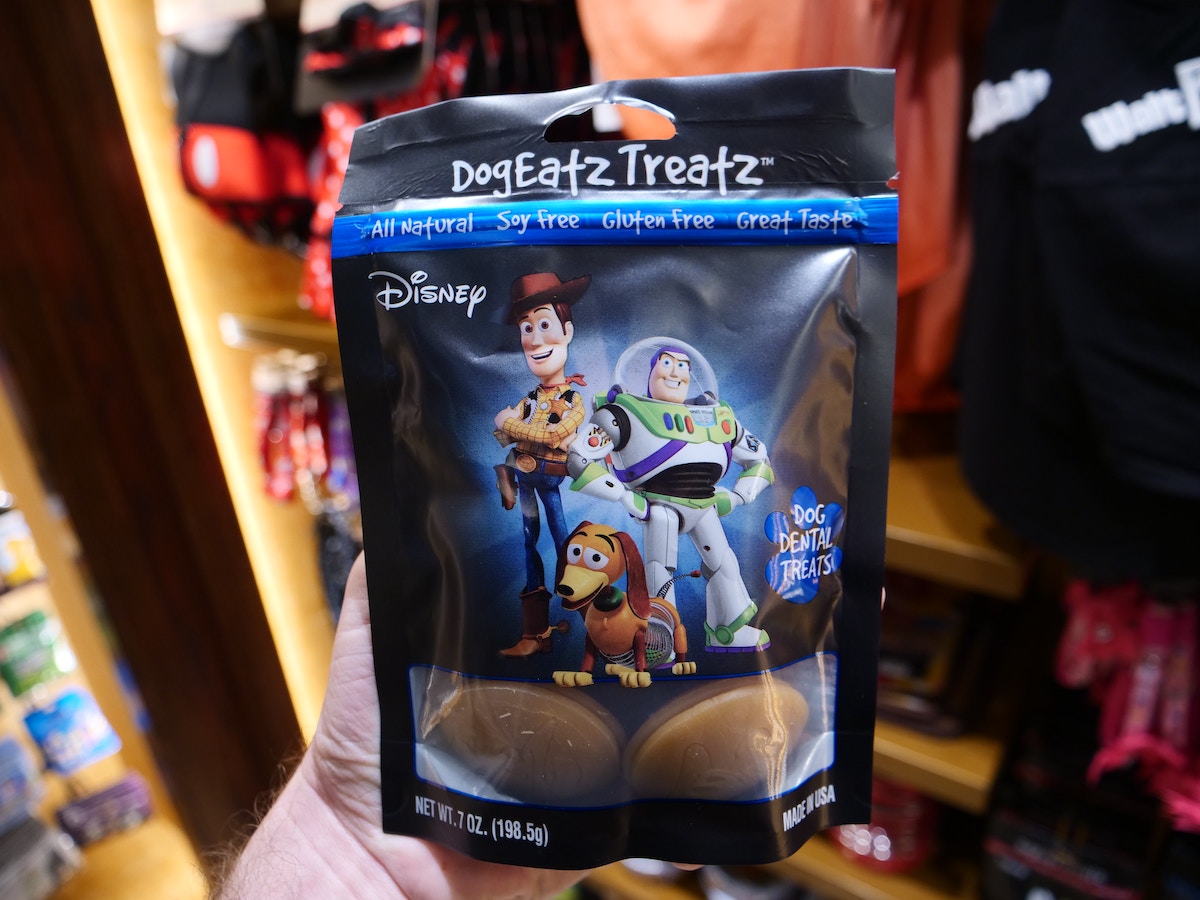 The DogEatz Treatz are themed after Pluto, Zero from The Nightmare Before Christmas, and Slinky Dog from Toy Story. 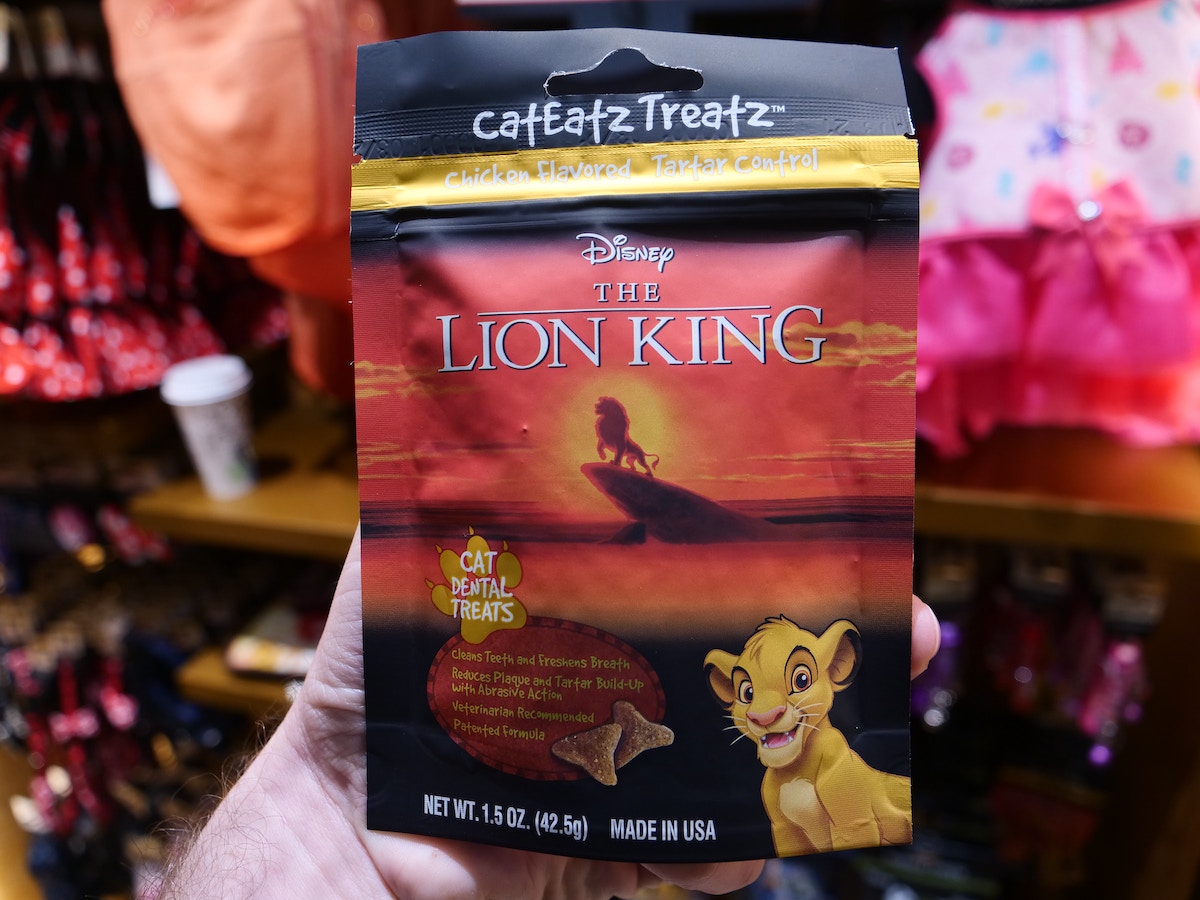 The CatEatz Treatz only had one variety displayed, which were based on The Lion King with the movie’s title and Simba pictured on the front of the package. 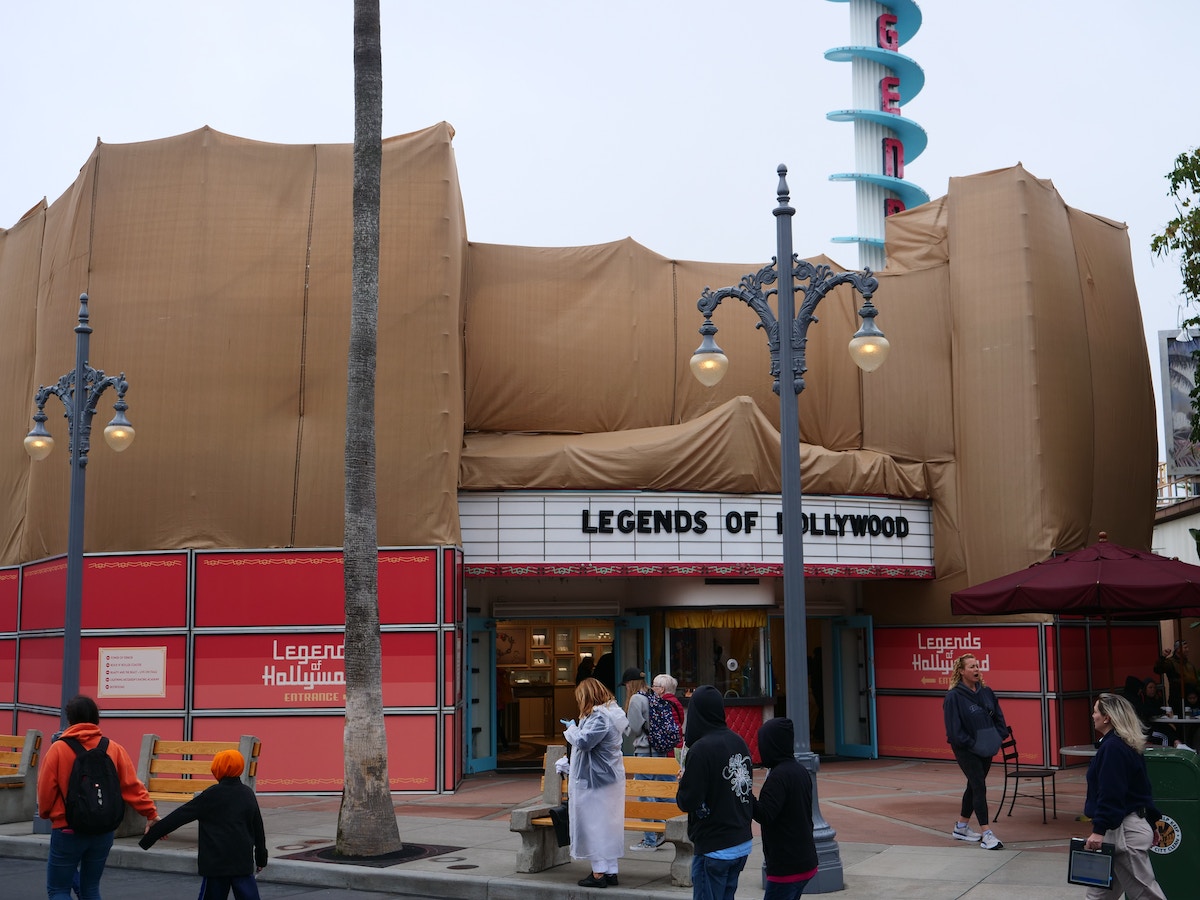 Off of Sunset Boulevard, the exterior refurbishment of Legends of Hollywood presses on, though we are not privy to seeing its progress due to the walls and scrim. 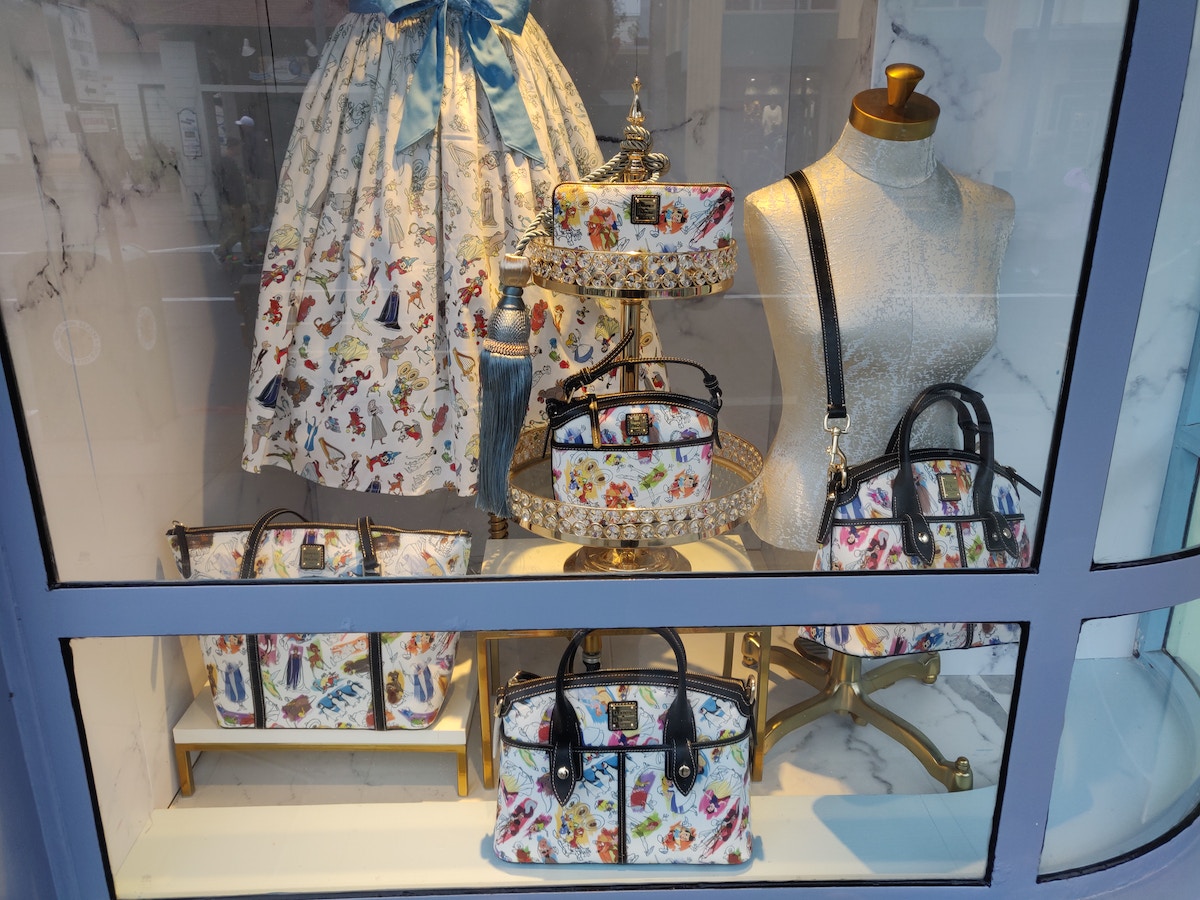 Despite the refurbishment, the store still maintains some displays which are visible from the street. This particular window contains the Dooney & Bourke Ink & Paint collection which was just released. 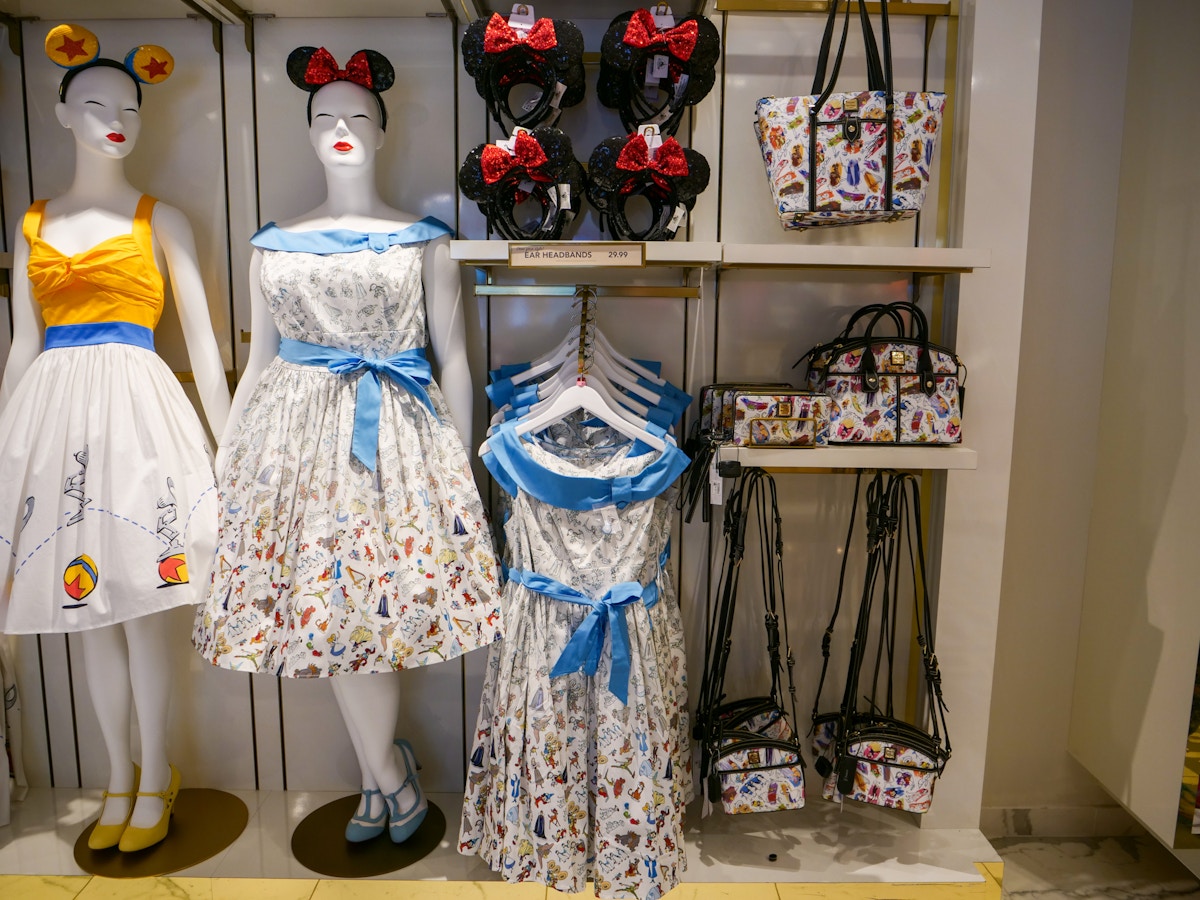 The store has the collection on the shelves as well, where items can be much more closely inspected. We’ve got all the details on the new items in our posts – check out the MagicBand, the dress, and the bag collection by clicking the links. 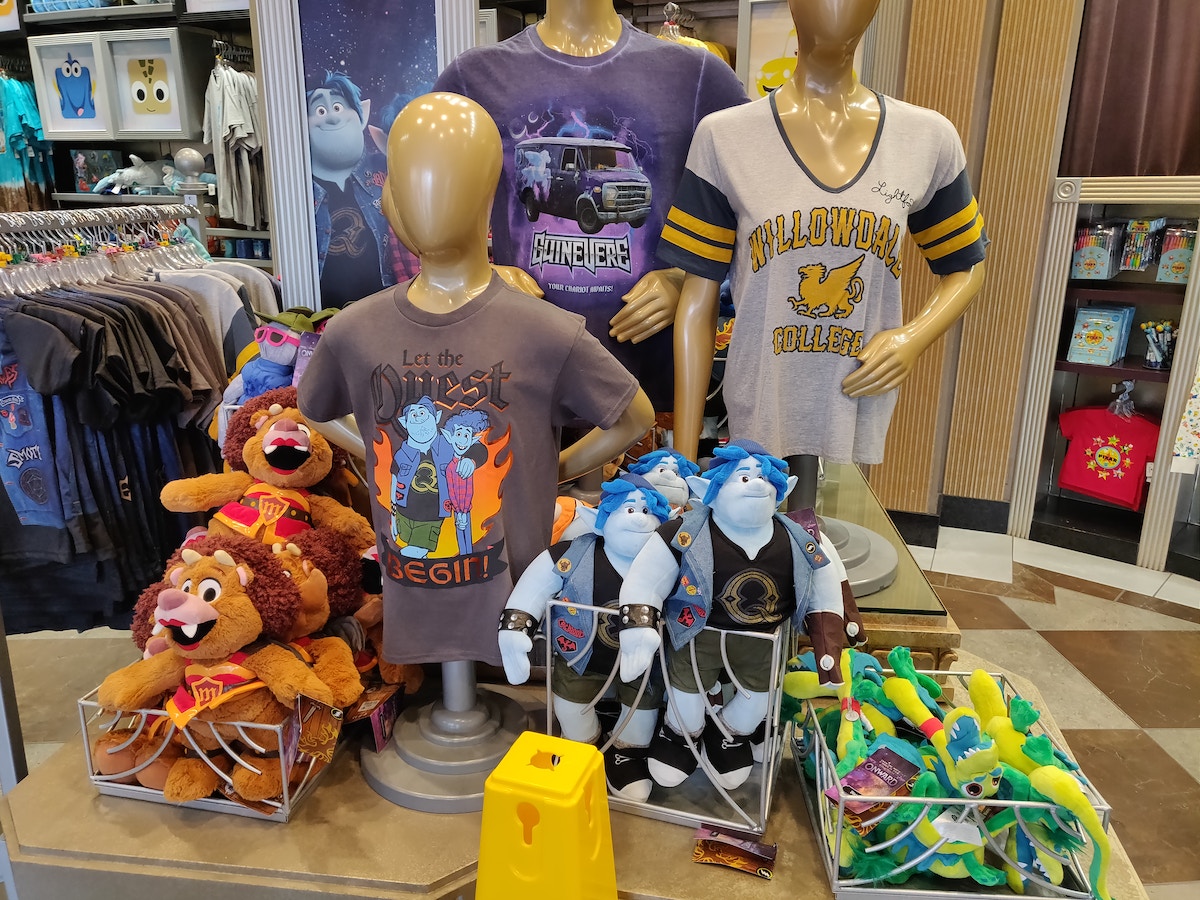 Another recently released collection is from Onward, with lots of merchandise themed to the movie having been released in the last week. These items were all on display at The Beverly Sunset, just across the street from Legends of Hollywood. 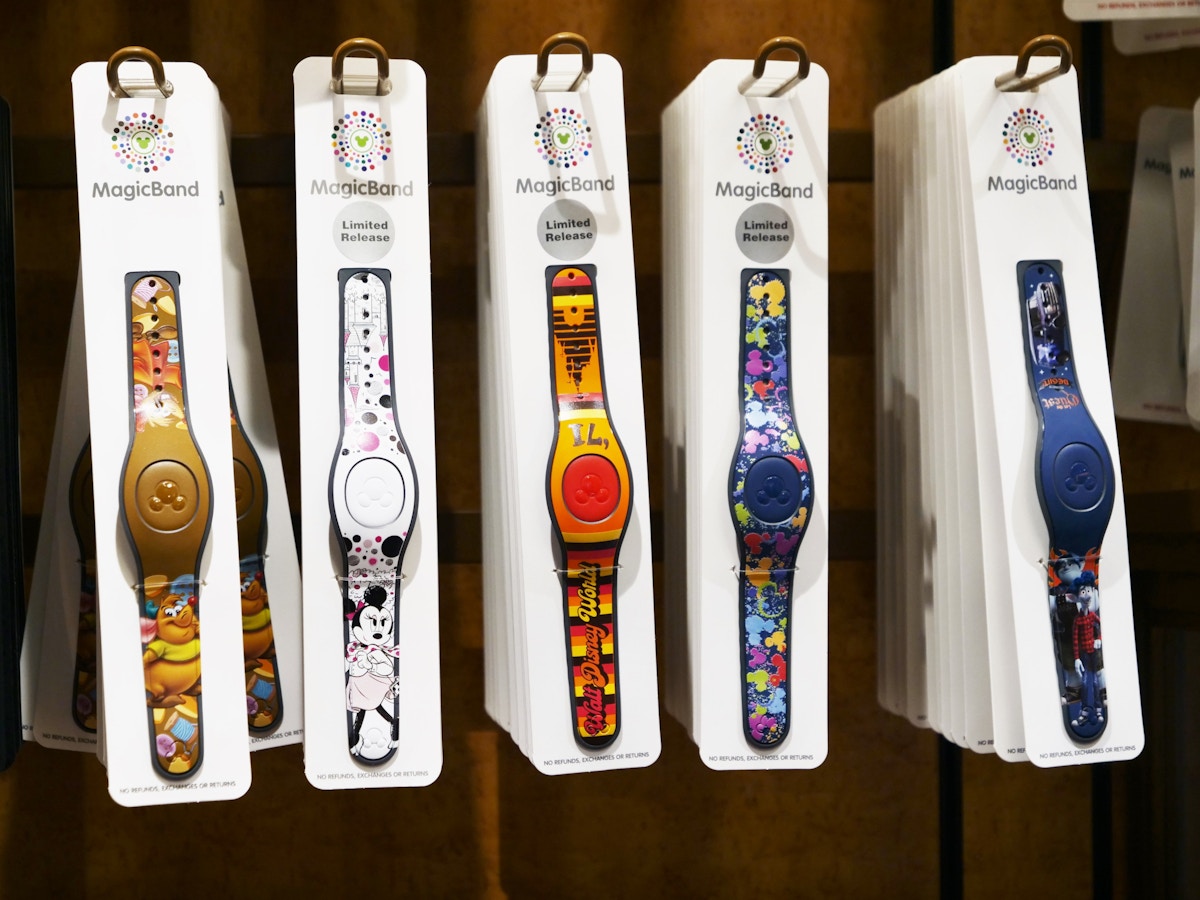 An Onward MagicBand, along with other newer and more limited releases, are available at The Darkroom. 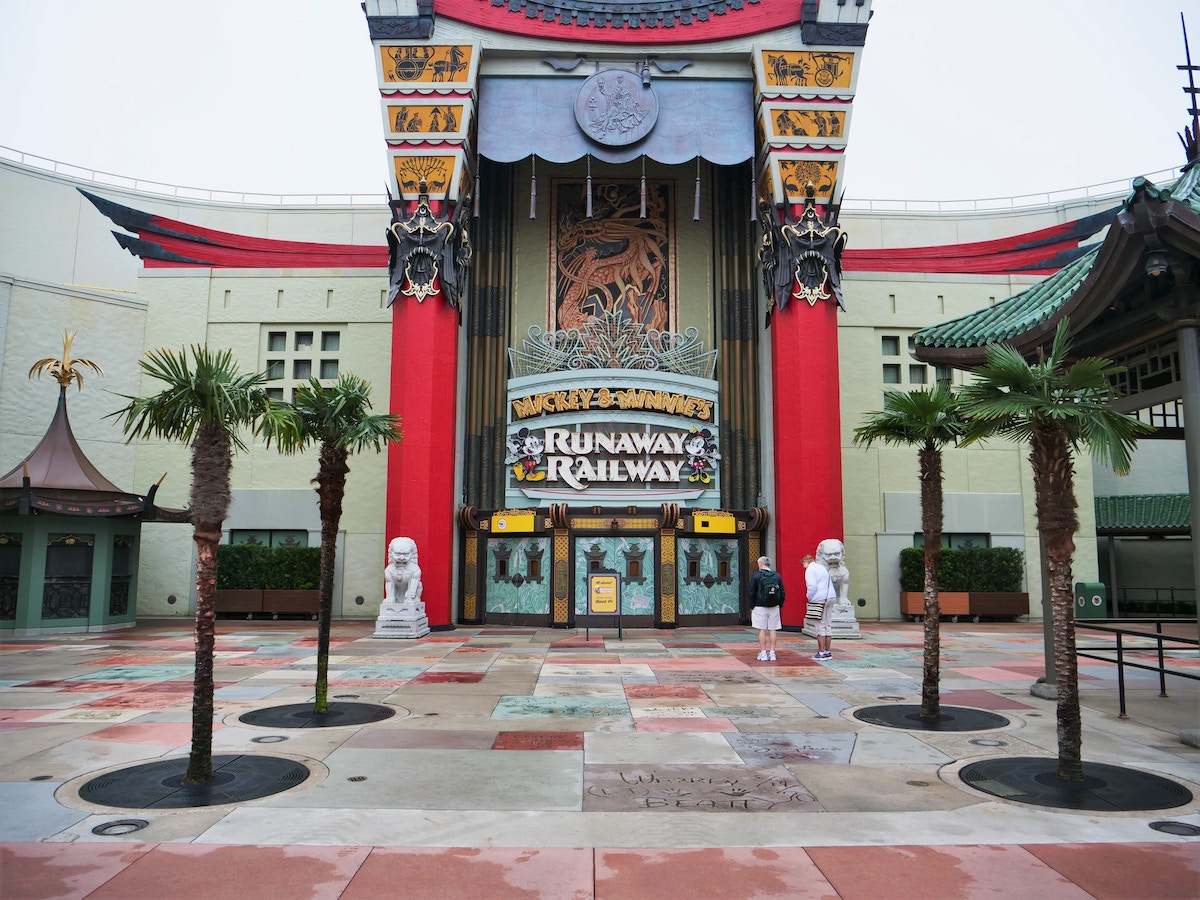 The Chinese Theater has had construction walls around the pairs of doors on either side of the marquee removed. The doors are now mostly hidden behind rolling planters. 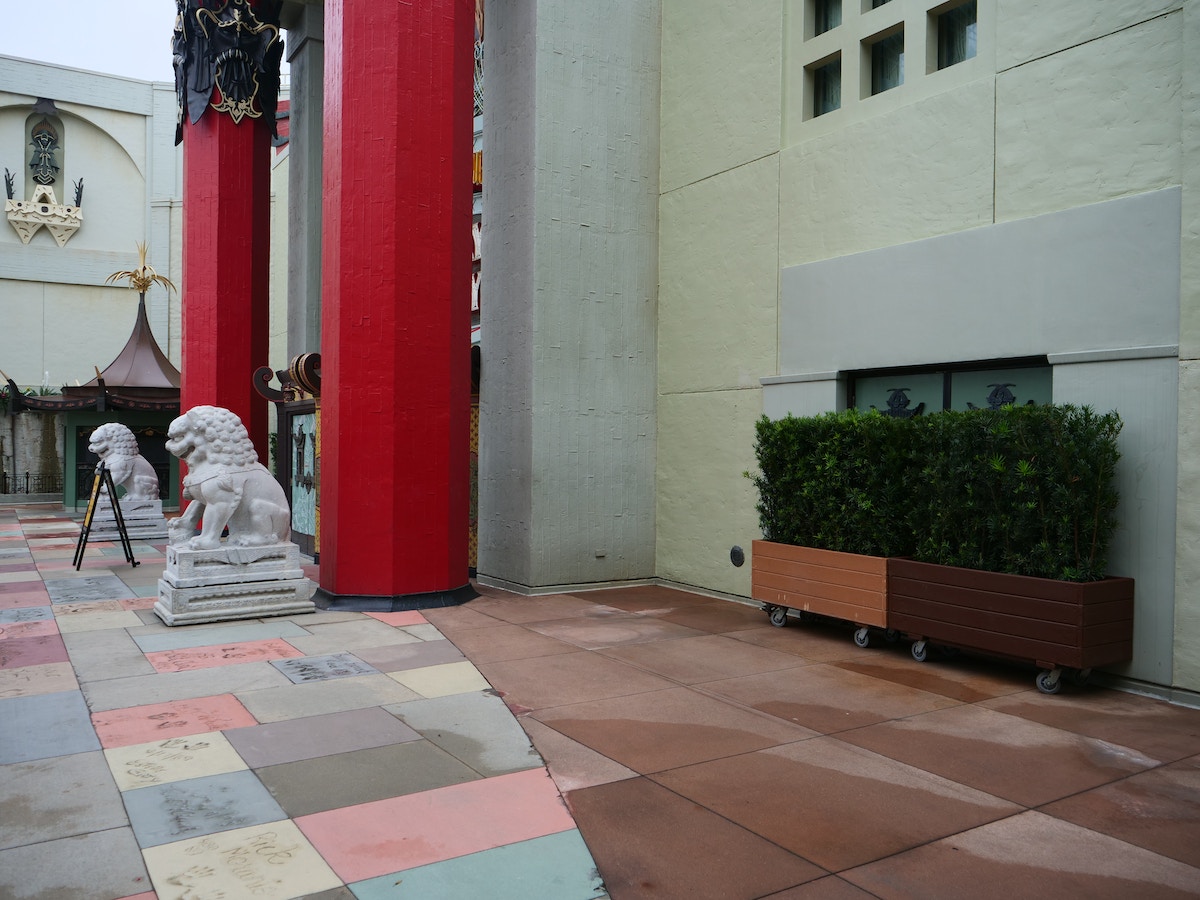 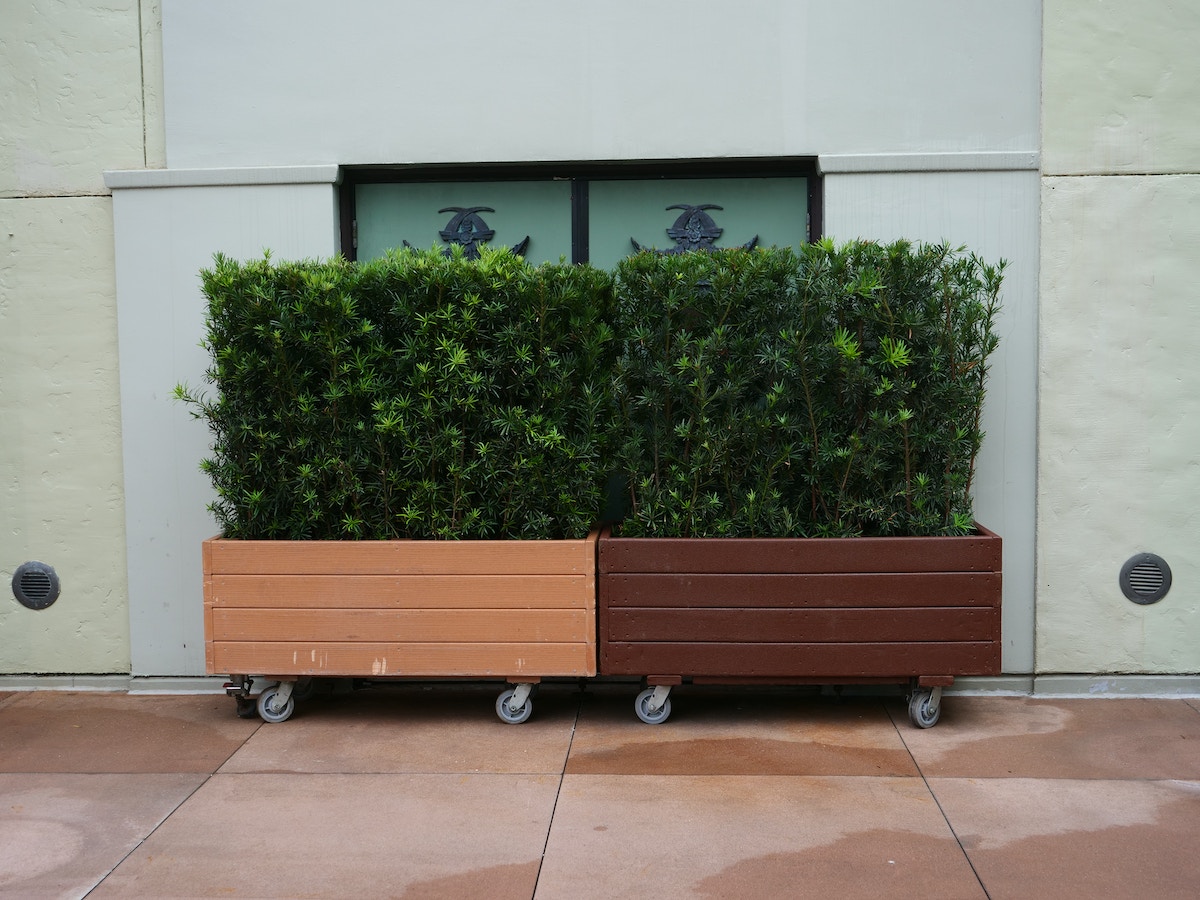 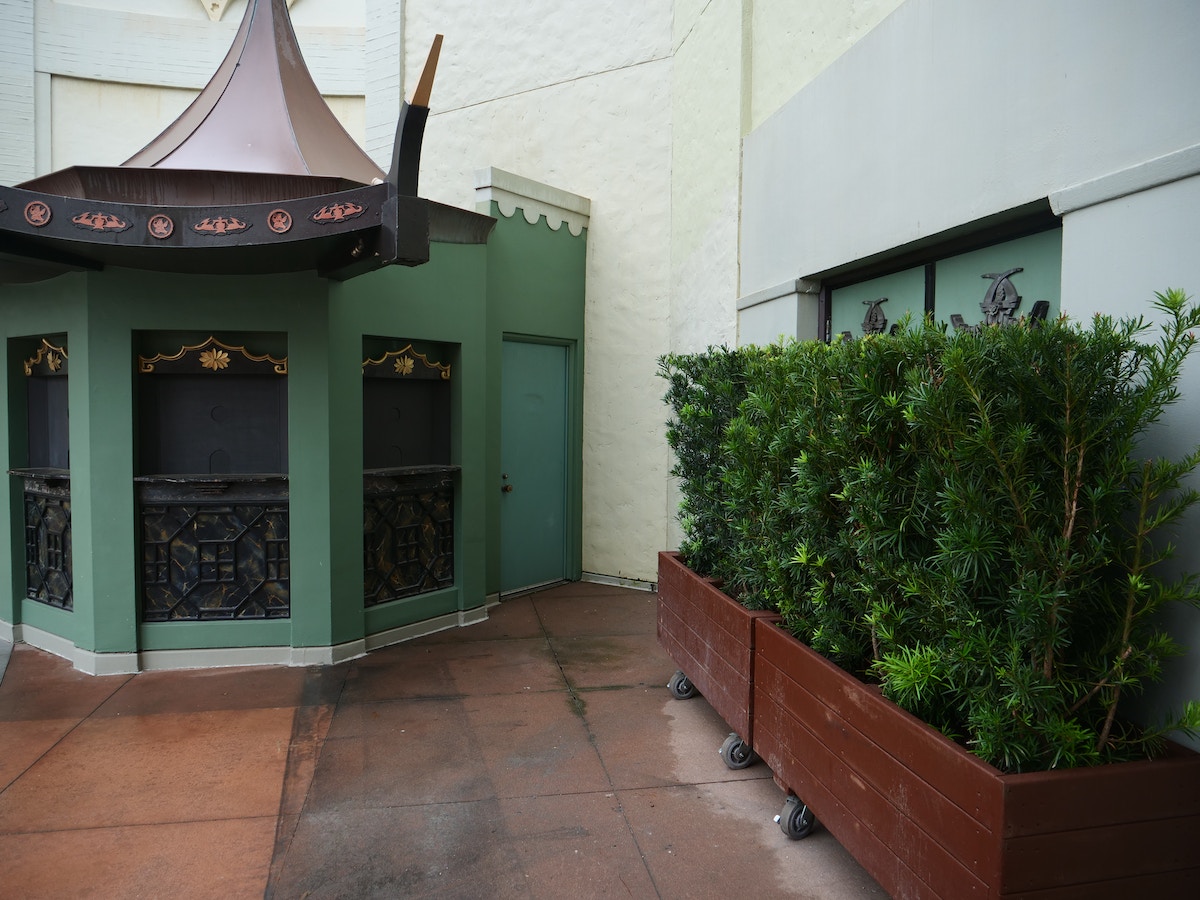 We have additional pictures and details on this change in our dedicated post – click here to read it. 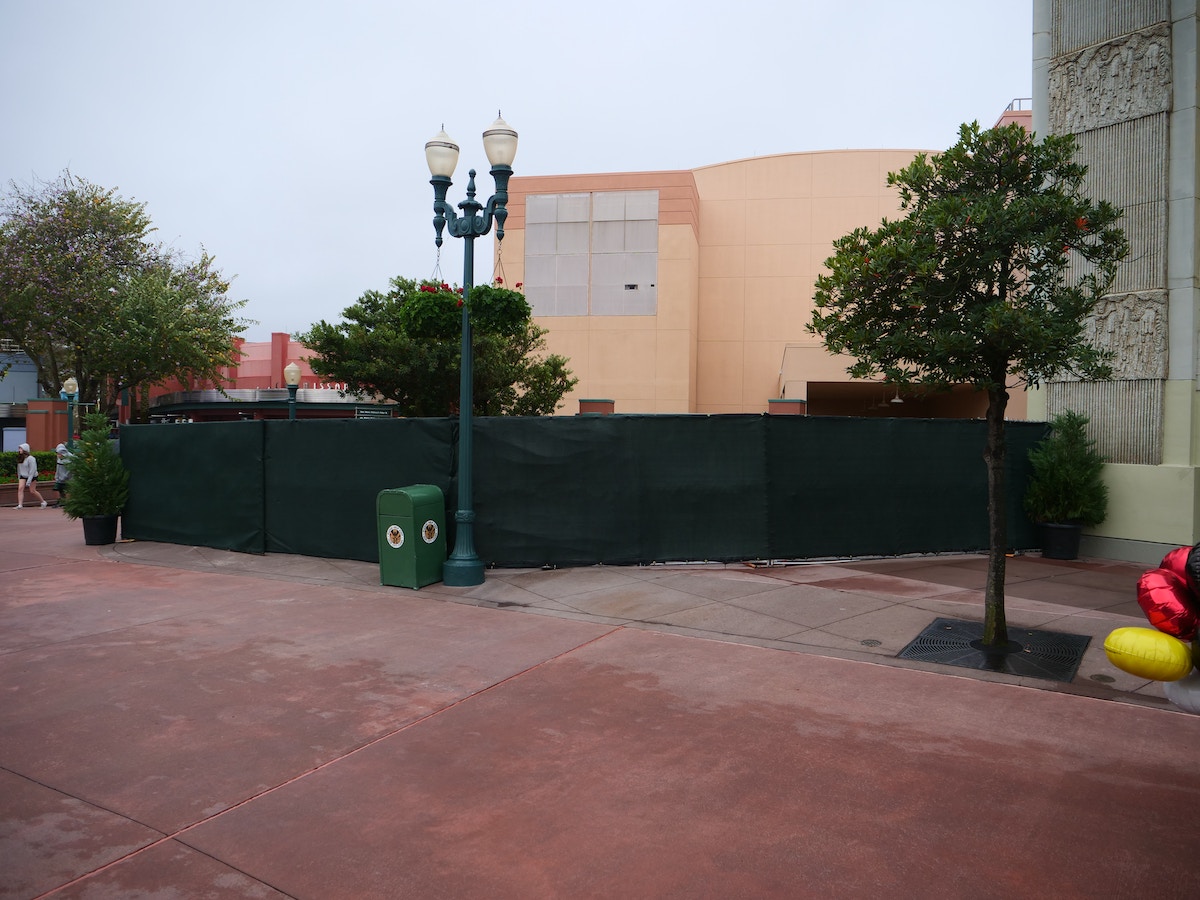 On the other side of Mickey & Minnie’s Runaway Railway, the area which formerly held the photo op for the attraction is still walled off. The area is awaiting some new pavement, but should be completed well before March 4th. 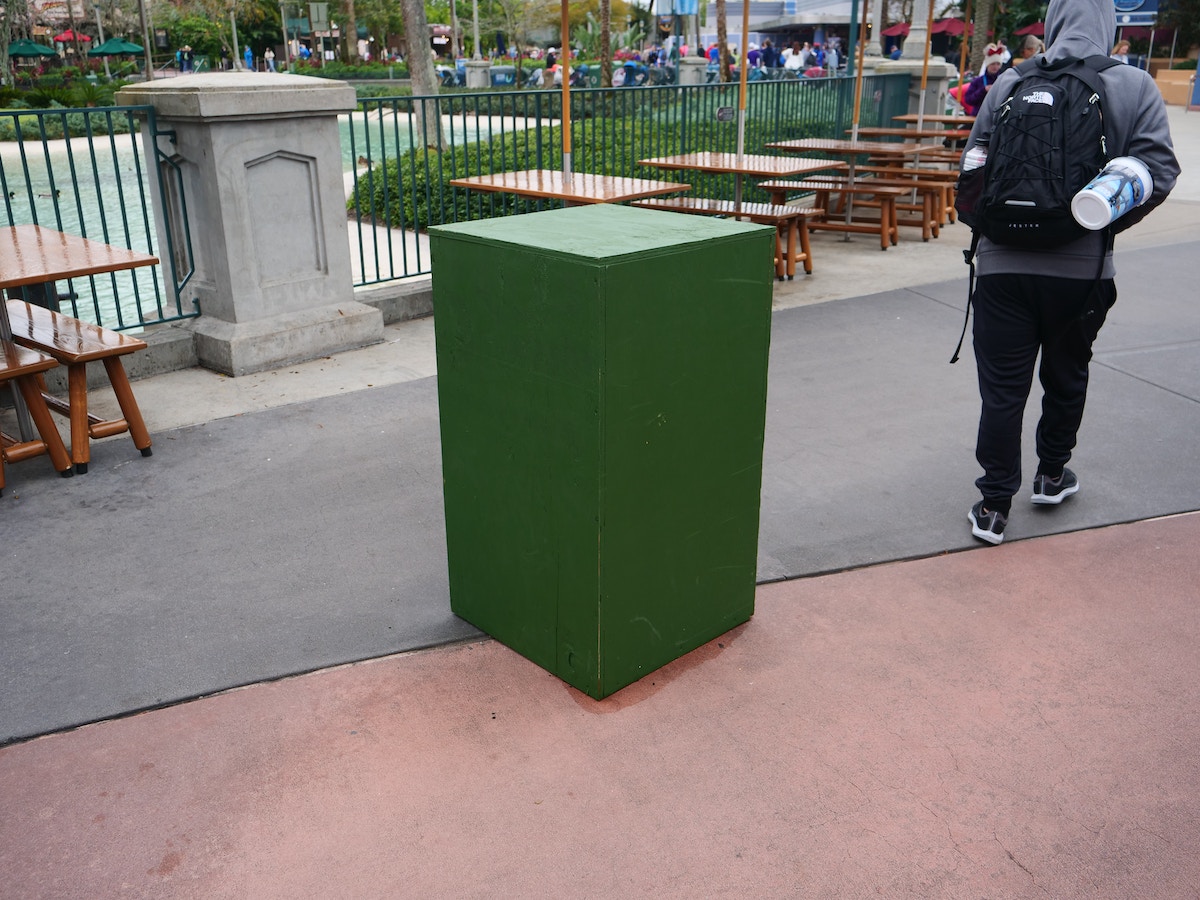 This random box, which went up a couple days ago, still sits in front of Dockside Diner with no explanation. ‘Go Away Green’ has its place on out-of-the-way structures, but it’s not the best color for a waist-high box placed in a highly trafficked area. 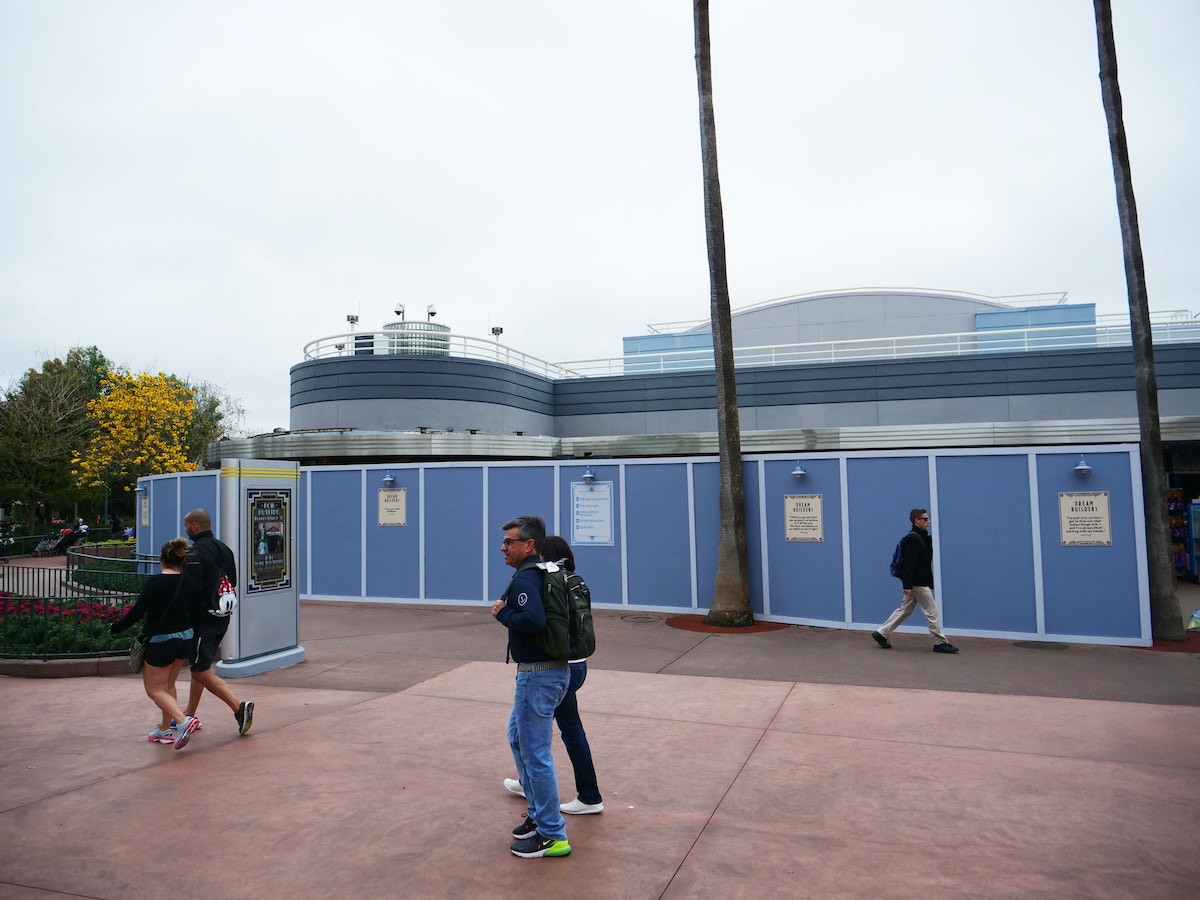 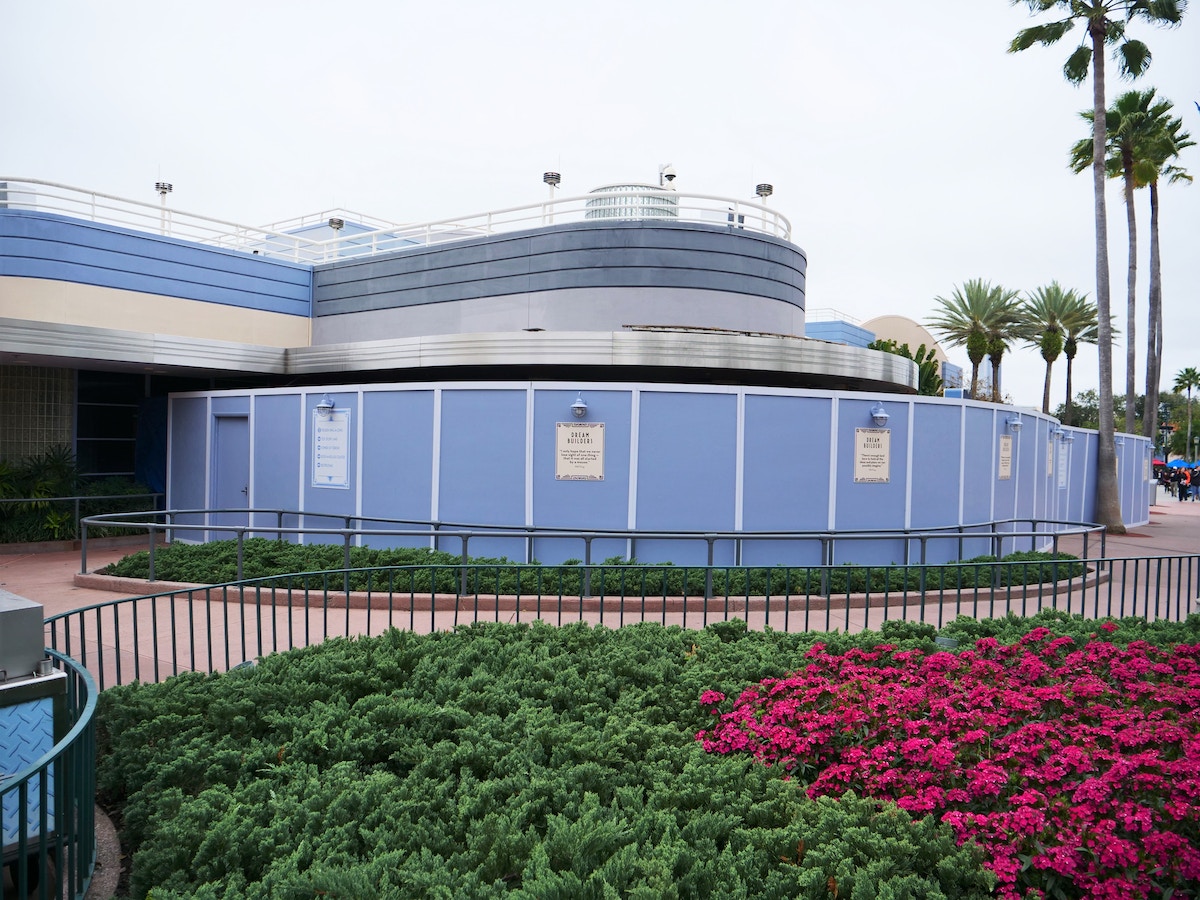 In less mysterious fashion, the construction around the Mickey Shorts Theater is continuing. In this case, we know what is happening, and we expect the work will be completed for the opening of Runaway Railway. 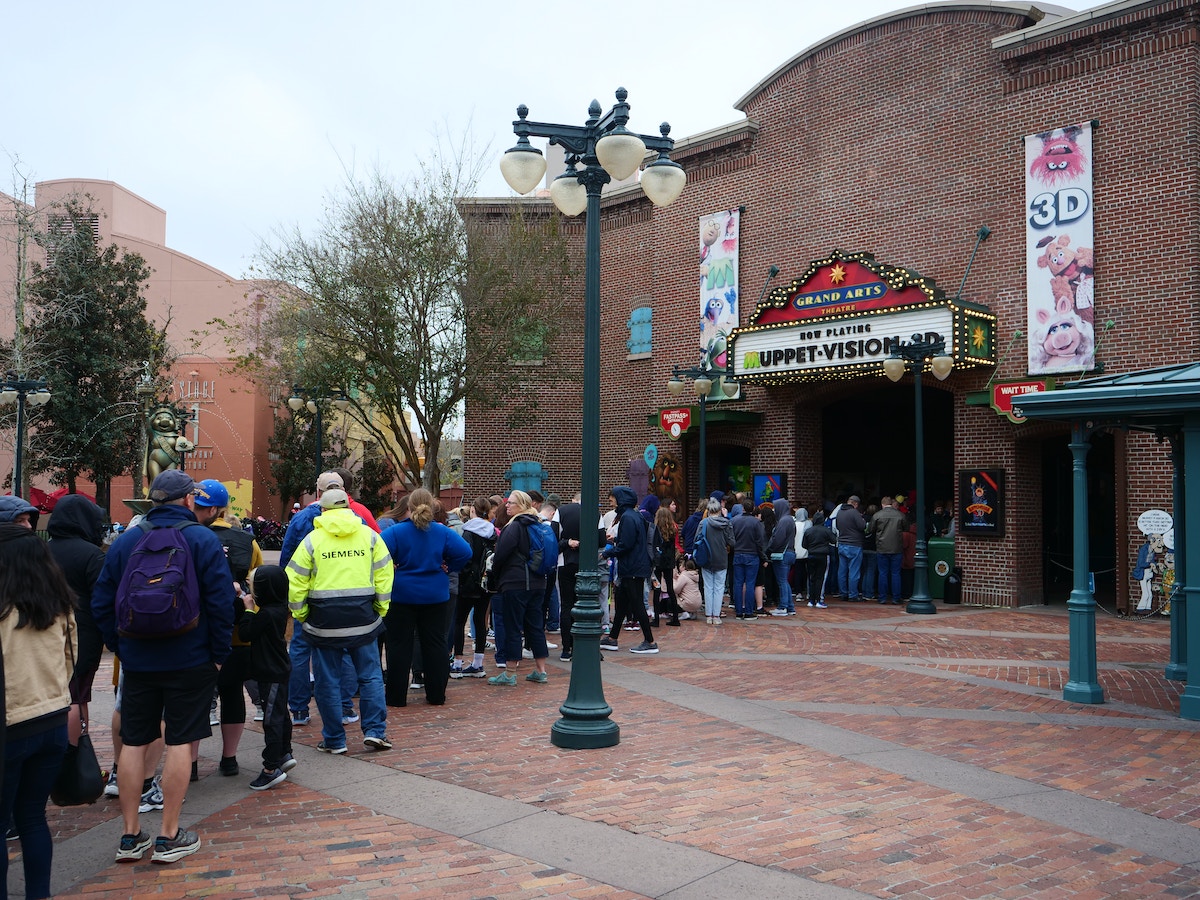 Back at the recently reopened Muppet*Vision 3D, the line was a pretty good indicator of how much guests wanted to quickly get indoors and out of the elements. 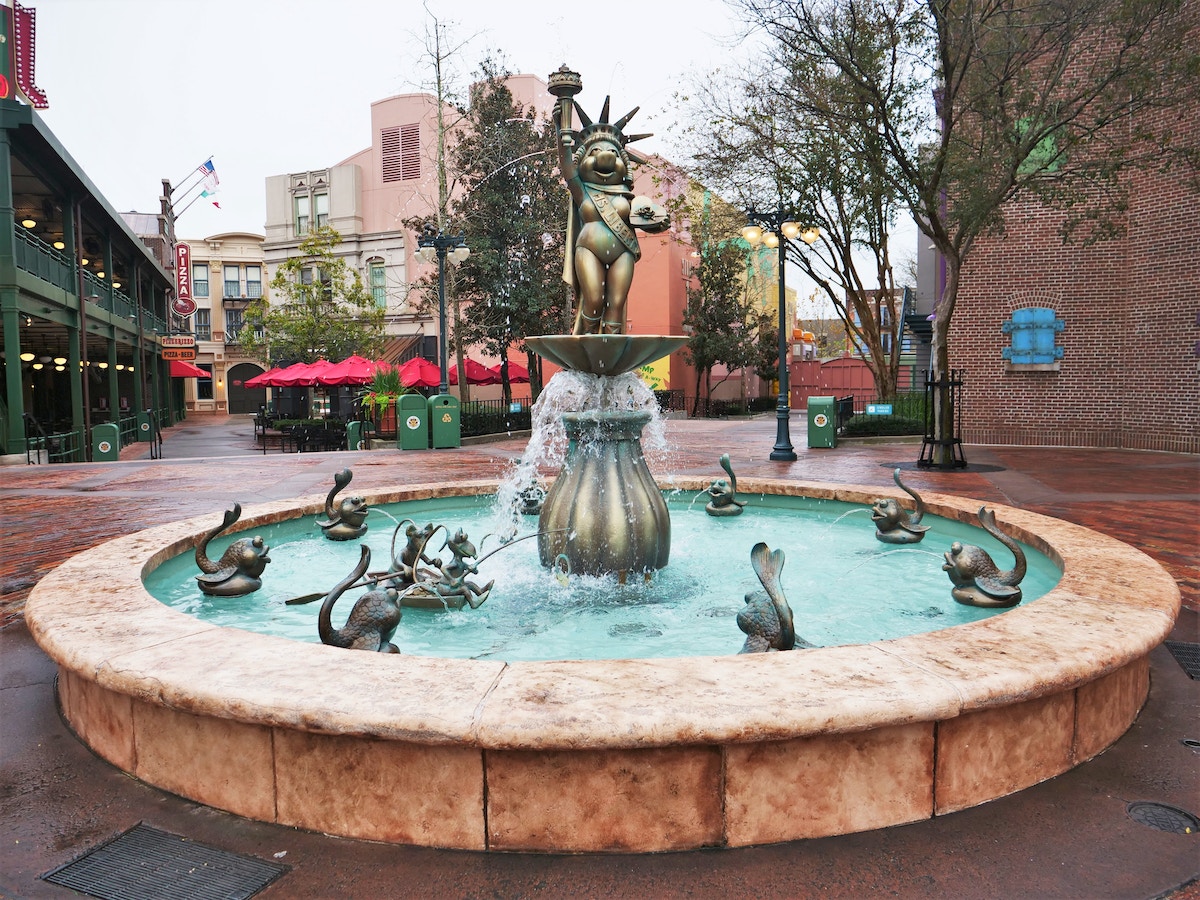 We check frequently to ensure that no rodents have unexpectedly disappeared from the fountain. 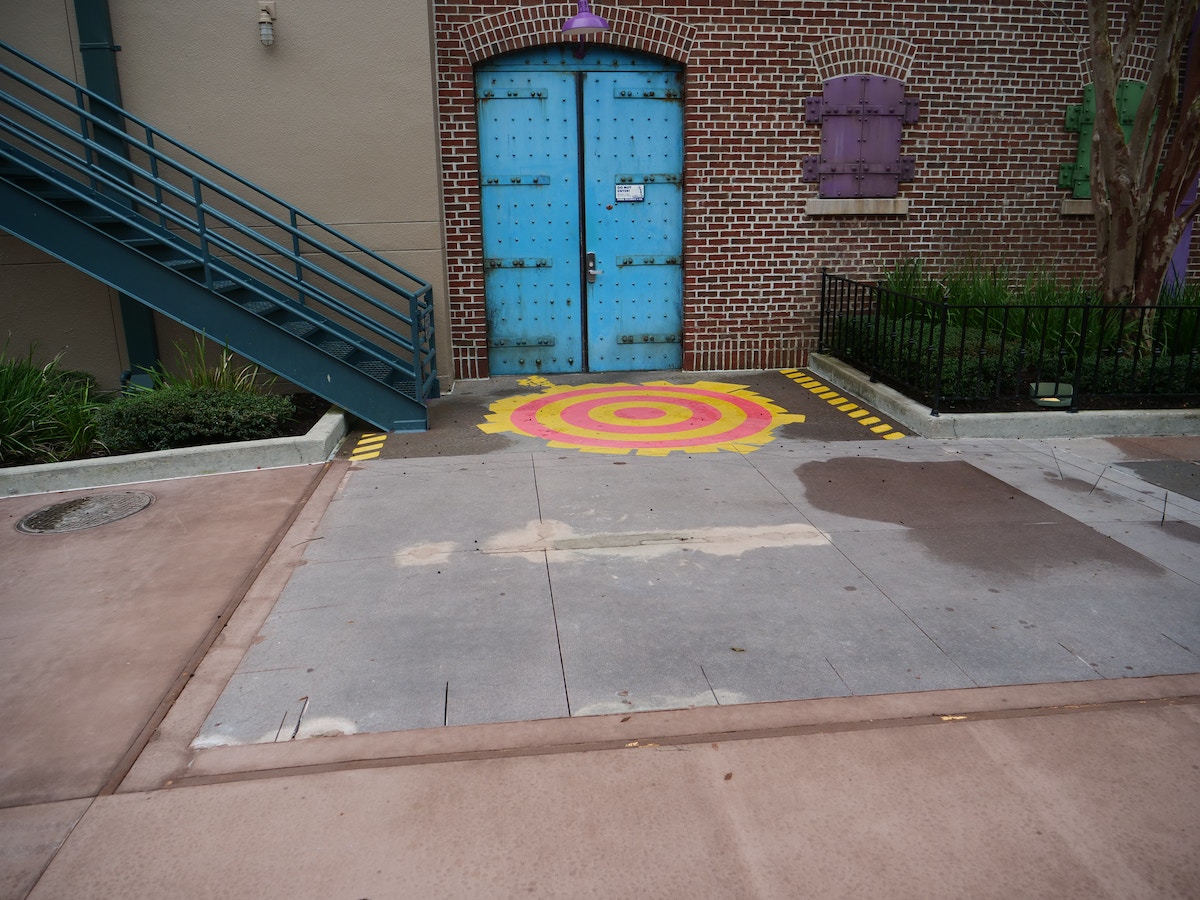 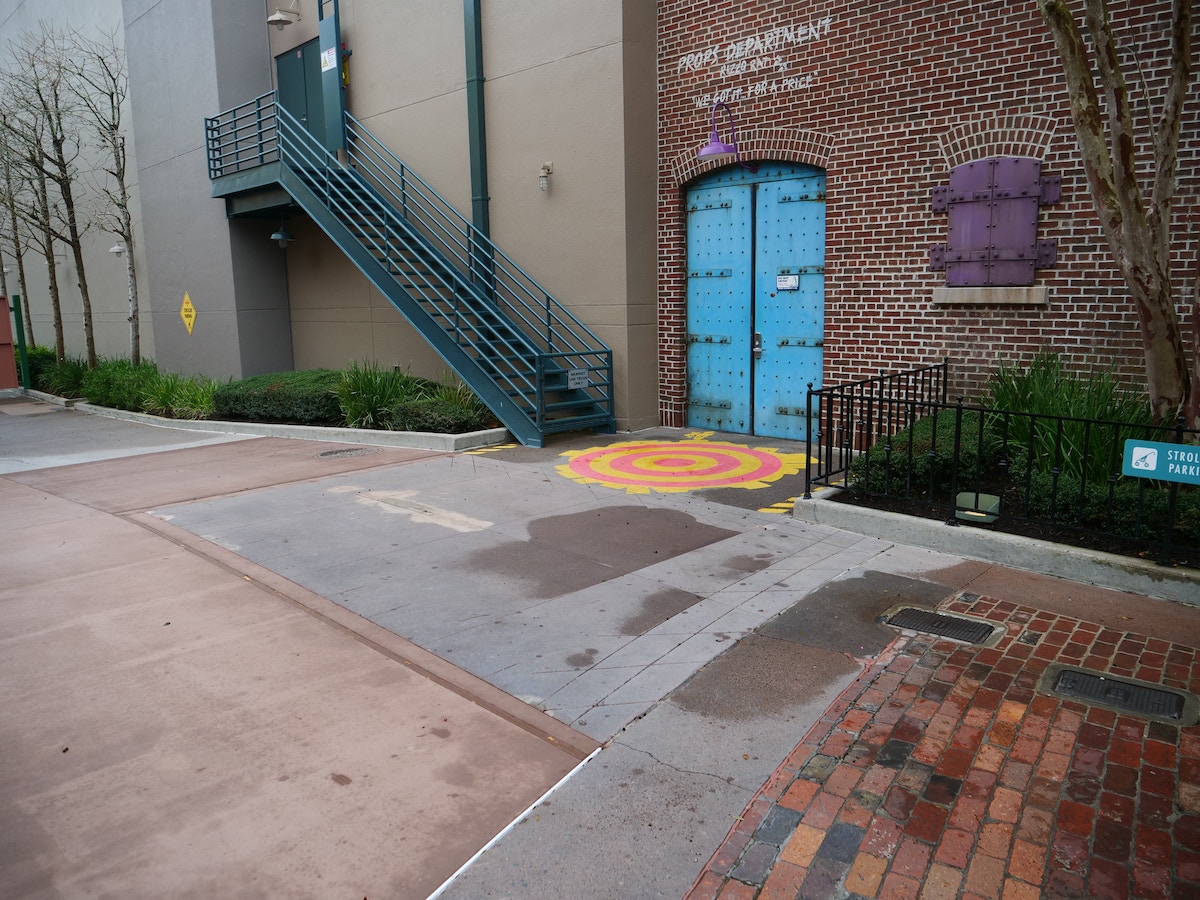 Similarly, after this area went behind walls for a short time, we also had to make sure the bulls eye painted on the ground survived. Thankfully, it did! 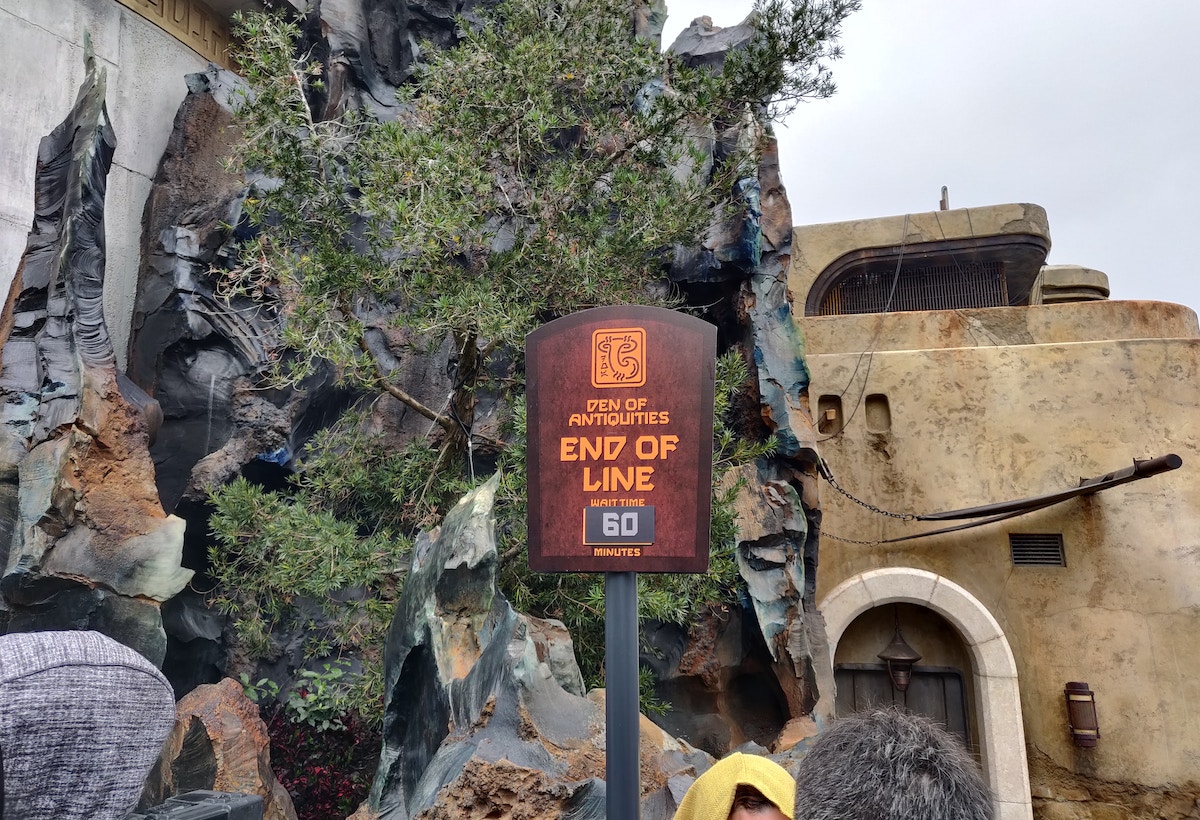 On Batuu, the wait to enter Dok-Ondar’s Den of Antiquities extended to an hour. That’s light years better than the two and a half hour wait from this past Sunday, though. 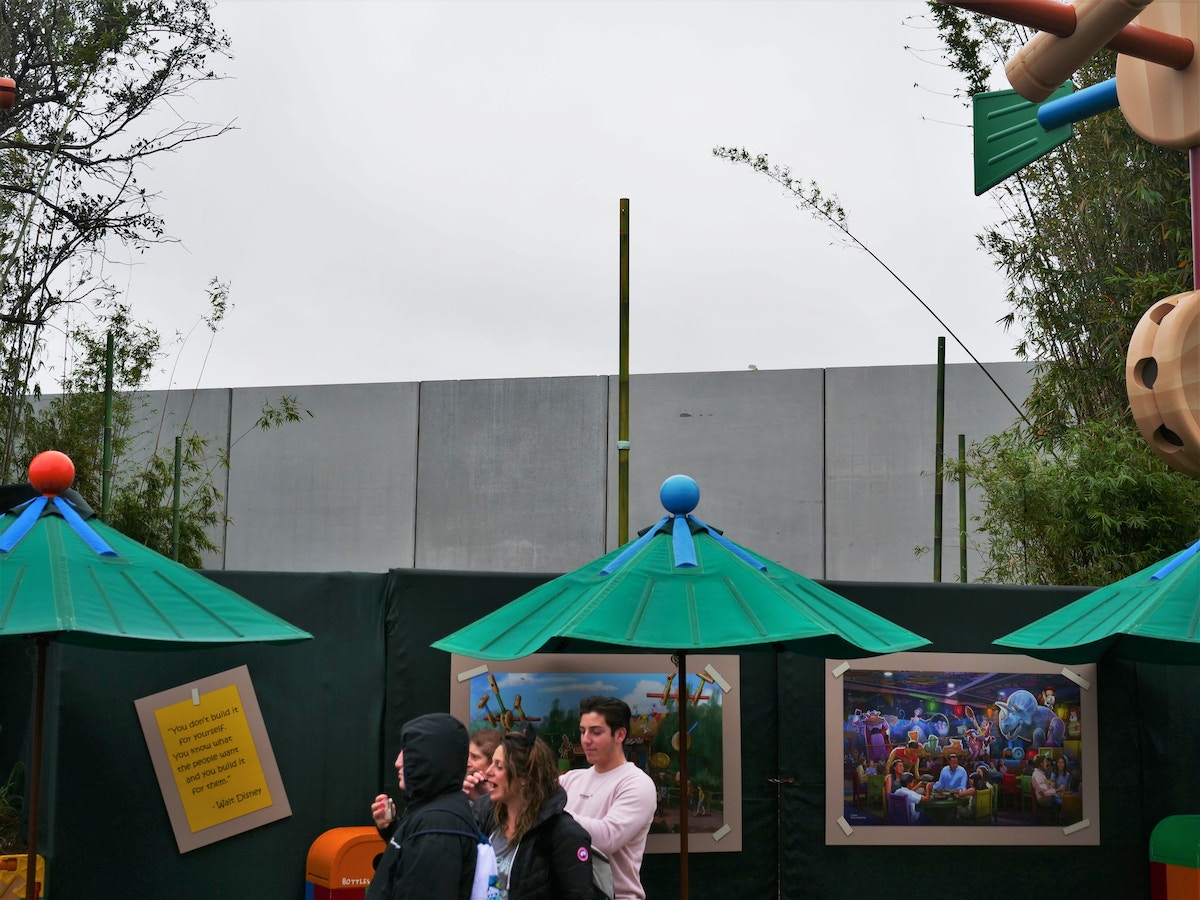 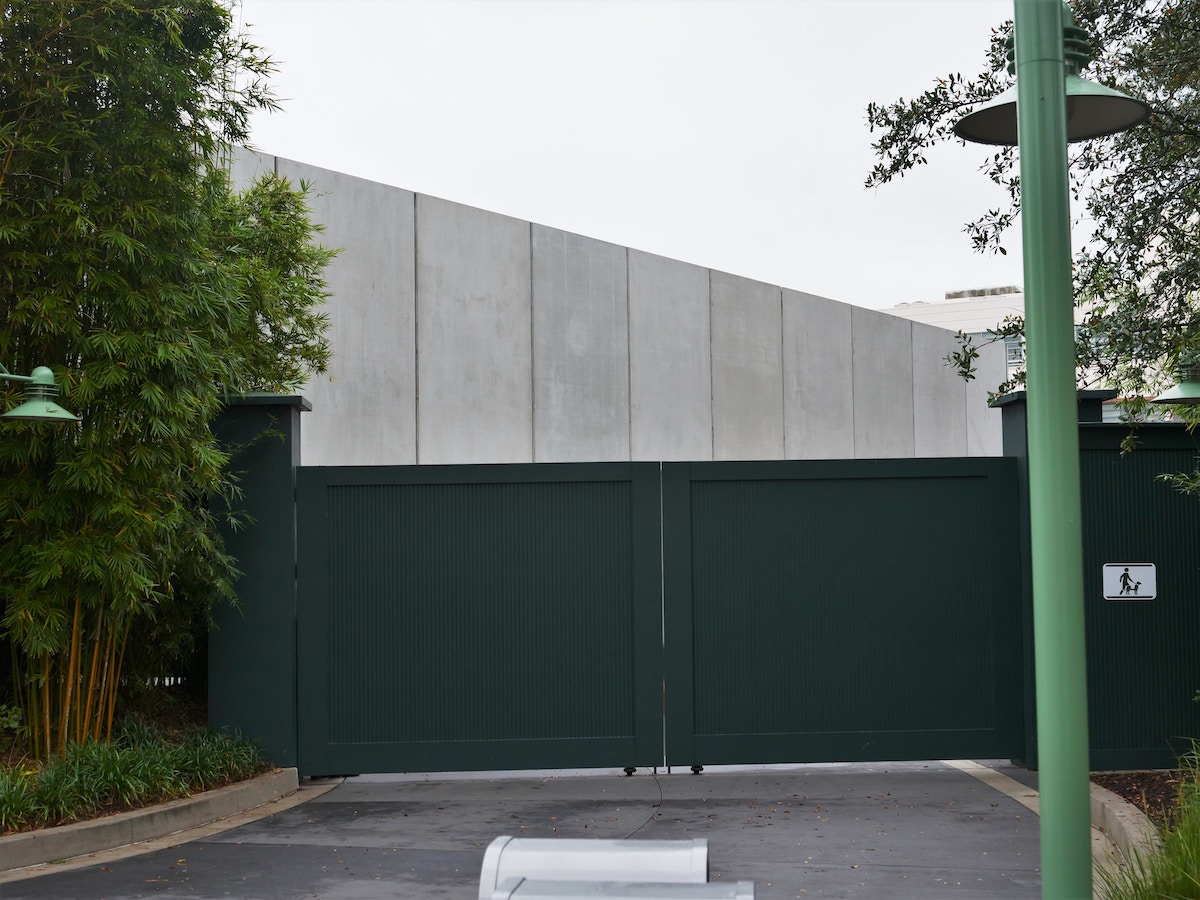 Circling around to Toy Story Land, we haven’t seen any exterior updates to the future Roundup Rodeo BBQ restaurant since land was cleared away in front of the entrance. 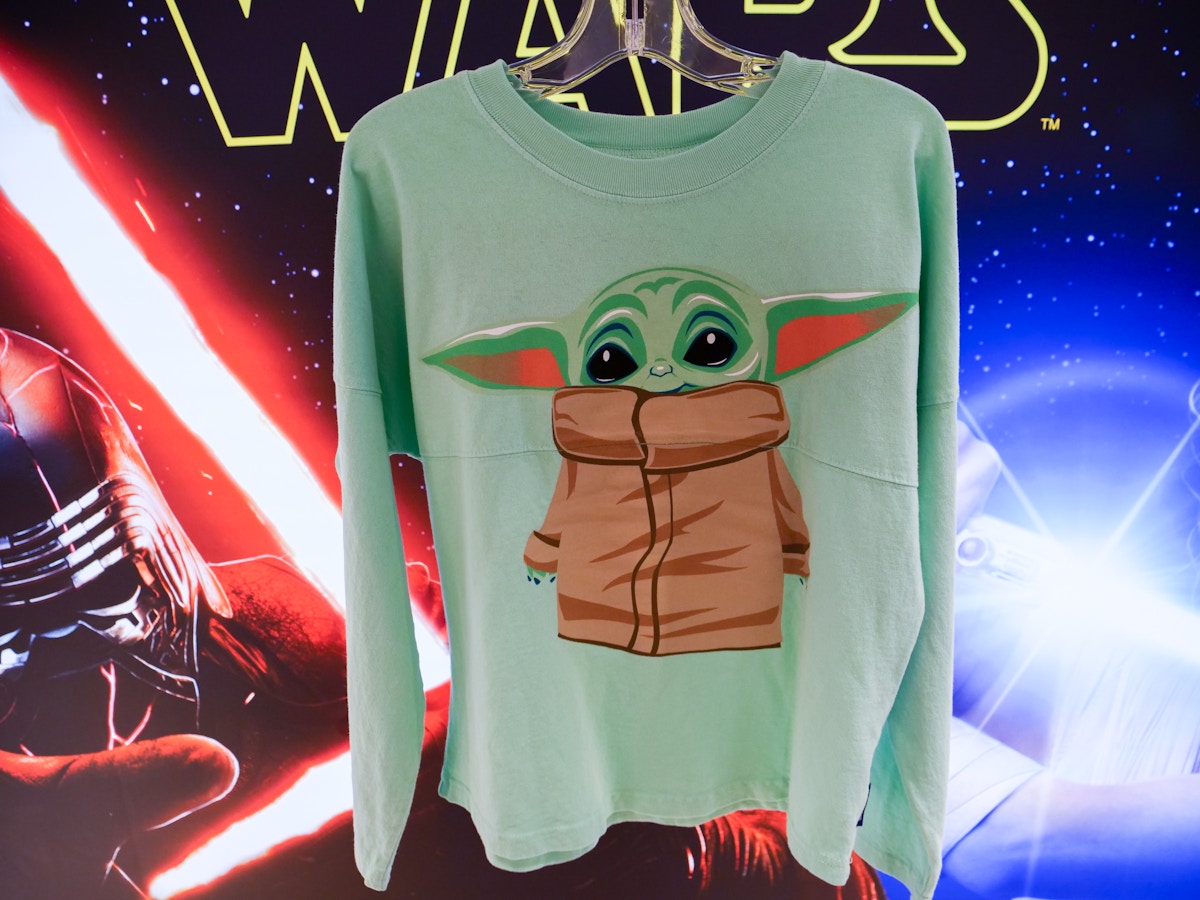 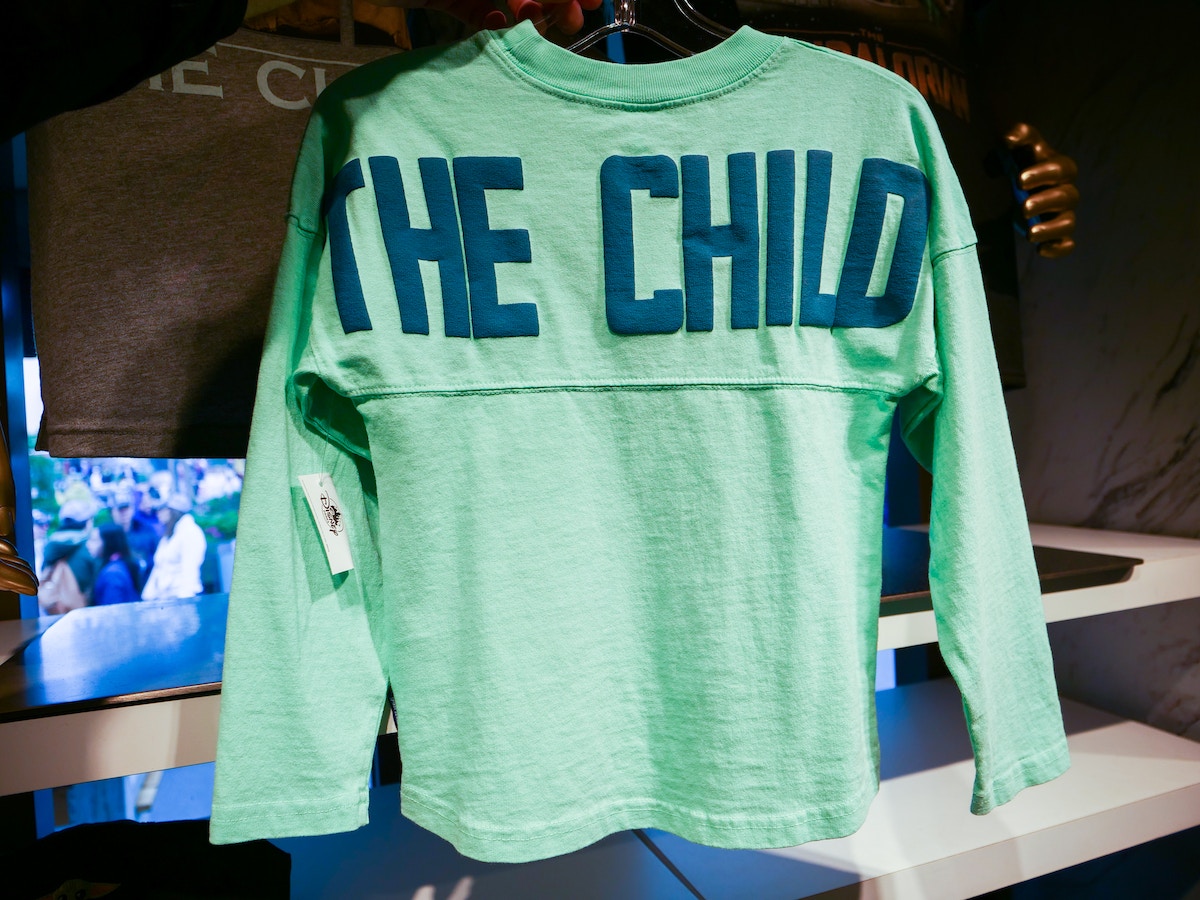 Rounding out our merchandise finds, this The Child (okay, Baby Yoda) youth spirit jersey landed at Keystone Clothiers. Naturally, we’ve got all the details on this adorable find within its own post – click here to view it. 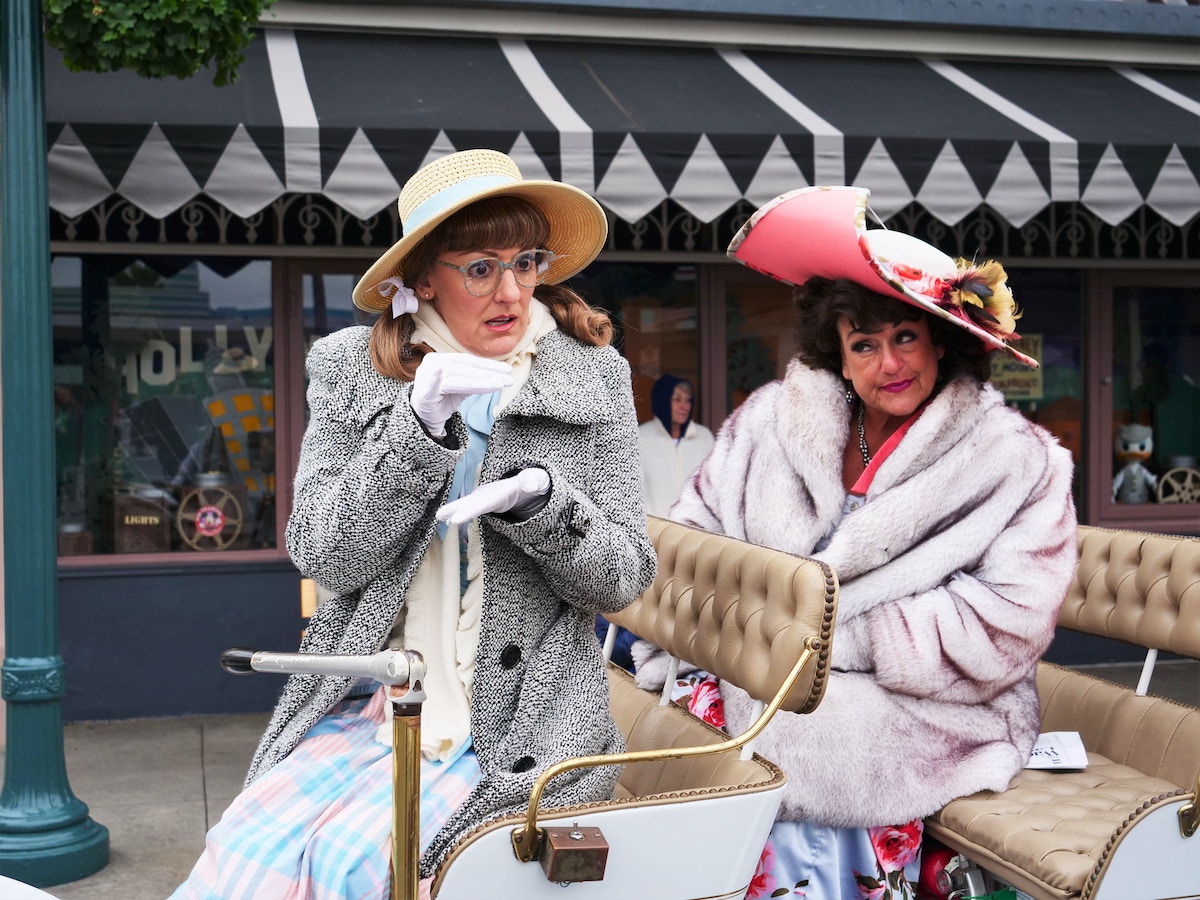 Finally, no Disney’s Hollywood Studios recap is complete without some streetmosphere. There is never a shortage of entertainment at this park, and these two eccentric characters keep that tradition alive.

We hope you enjoyed our trip around the park! With Mickey & Minnie’s Runaway Railway so close on the horizon, are you planning to make a trip to Disney’s Hollywood Studios soon? Let us know in the comments!