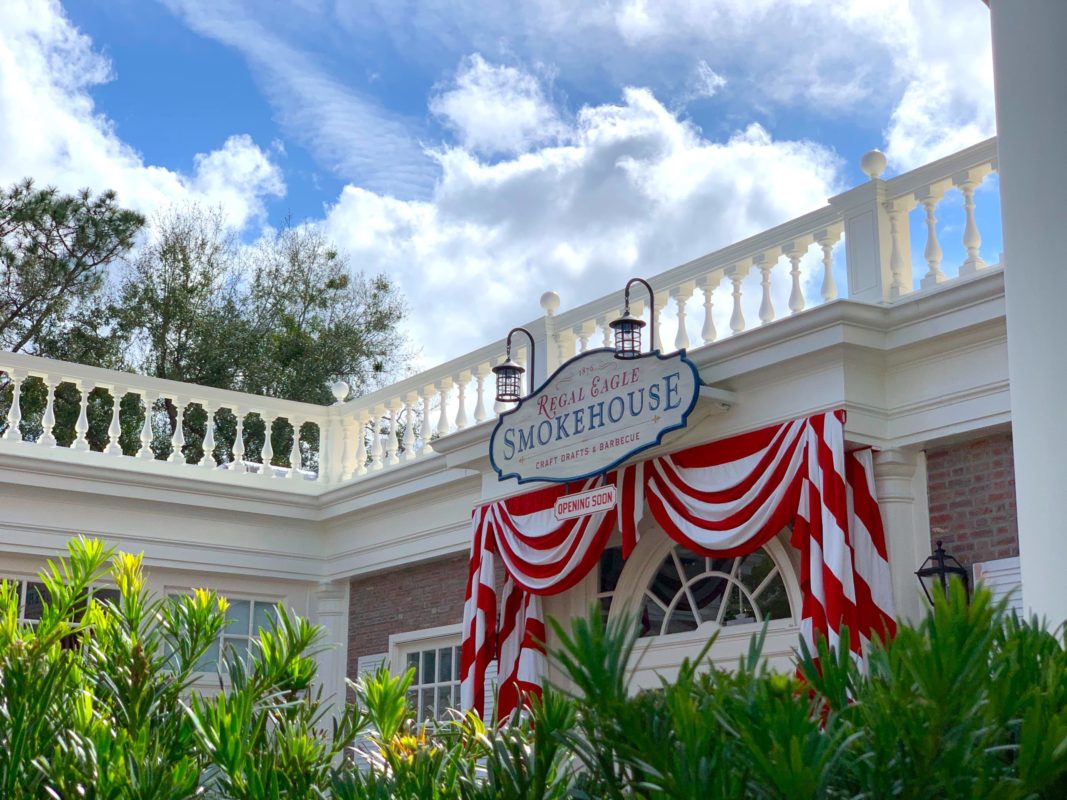 A salute to all World Showcase pavilions, but mainly The American Adventure. After weeks of being covered beneath a tarp, signage has been revealed at Regal Eagle Smokehouse: Craft Drafts & Barbecue in EPCOT. The sign is decorated on both sides with patriotic red and white striped bunting, as well as two lanterns hanging over it to keep with the Centennial Decade vibe of the pavilion. Beneath it hangs a little “OPENING SOON” sign… almost like they know that guests and bloggers alike have been flocking to the location every day for the past week or so to check if it’s finally open.

It’s important to note that the Sam Eagle insignia is missing from this sign design. If you look closely, you’ll also notice that it’s mostly a flat, printed sign. Normally, this would be a fully carved or 3-D printed sign, so we aren’t sure if this is a temporary placeholder sign or the actual sign. In any case, the main sign, which will be perched atop the archway as guests enter from World Showcase, has also yet to appear. While the restaurant has yet to officially open at EPCOT, with every new sign or final detail revealed, we can feel ourselves nearing ever-closer to that smokey barbecue taste and smell. Here’s a look at other preparations underway at the upcoming restaurant:

It’s clear Cast Members and management are running through final preparations, as opening is imminent. 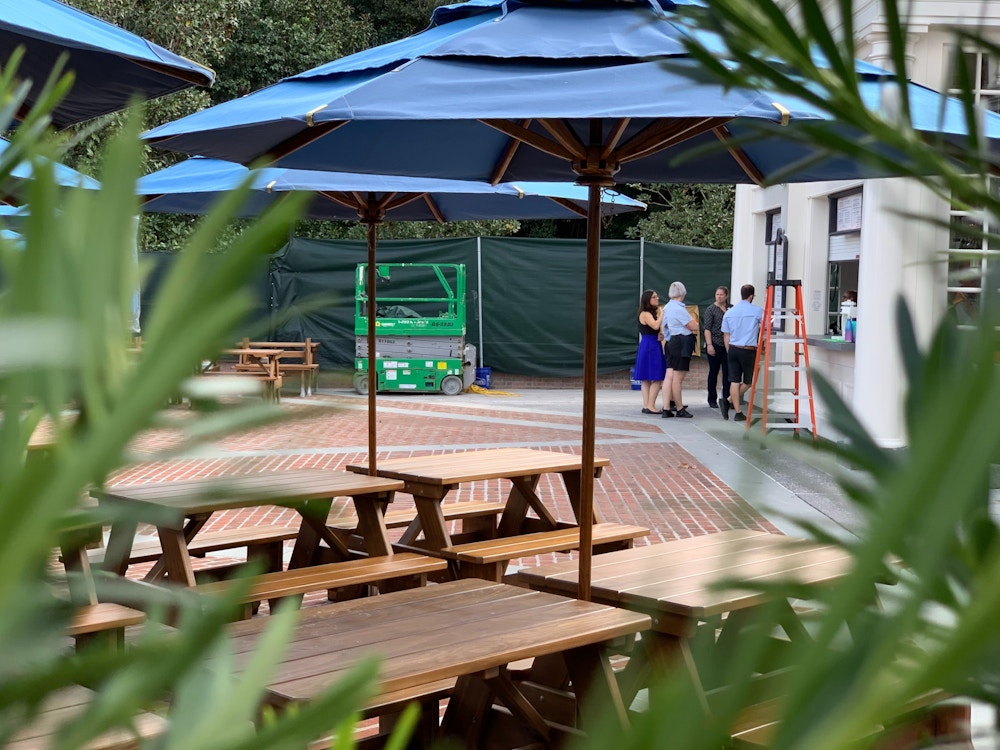 You can even spot some Cast Members inside the walk-up bar itself, likely testing functionality of the space and overall equipment set-up. 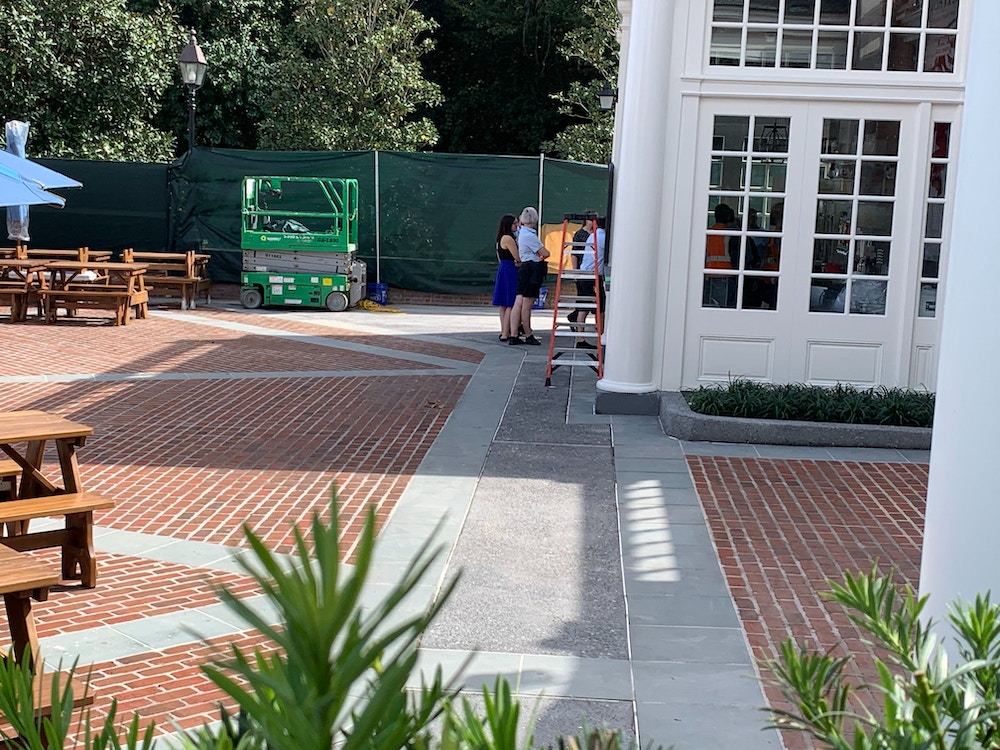 Umbrellas are seen fully ready to take on the Florida sun as they were folded down even just yesterday. They’re oddly two-toned in a darker and lighter blue color, almost like beach umbrellas. 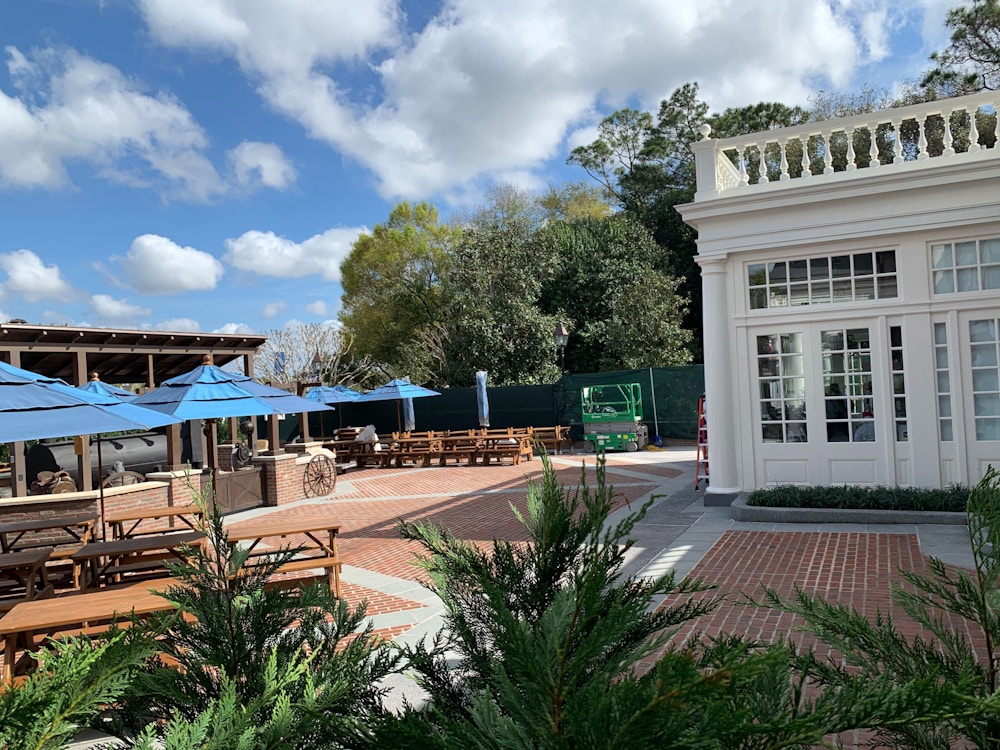 The smoker has the finishing touches of a western saddle and some large spoke wagon wheels to compliment the classic American theme. 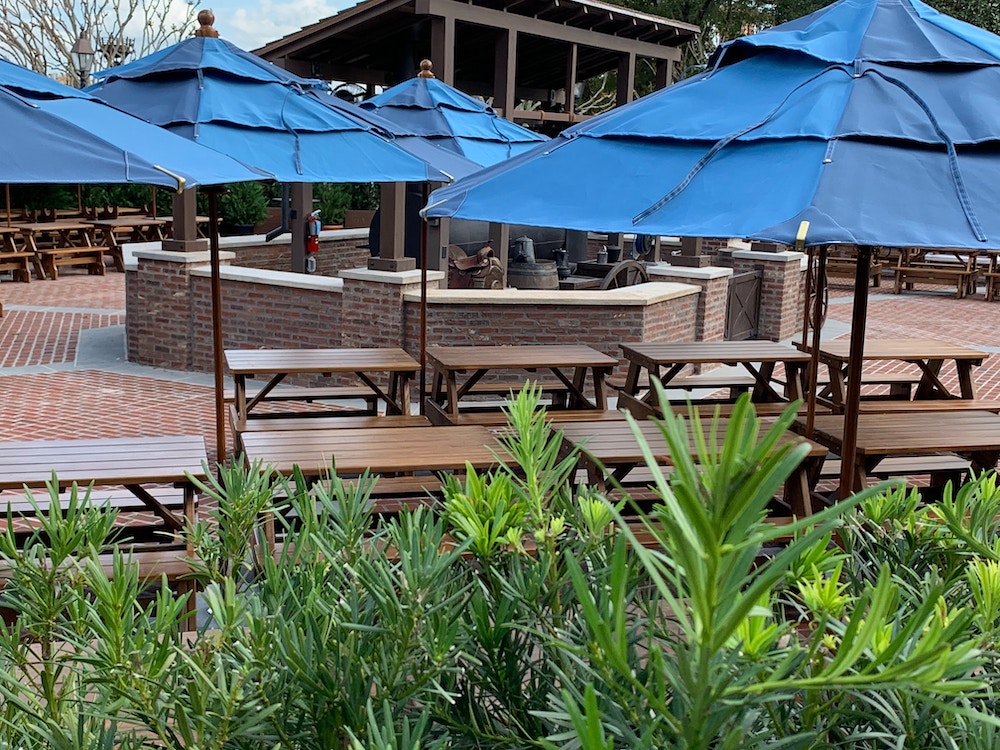 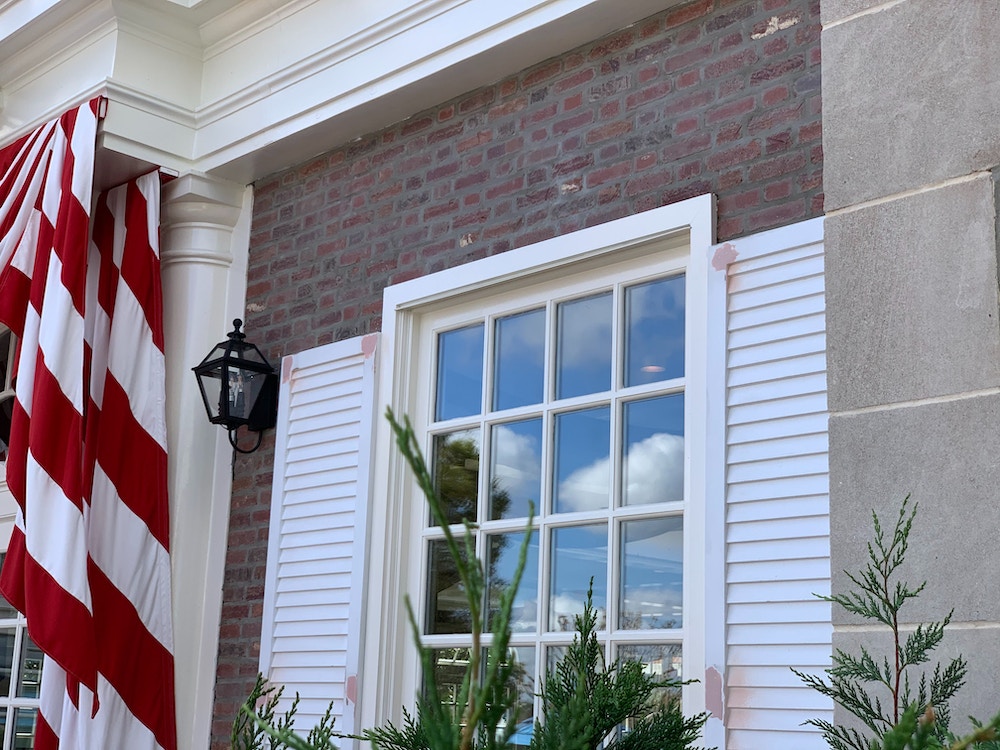 There can’t be much more left to do with the entire dining area seemingly ready to go. 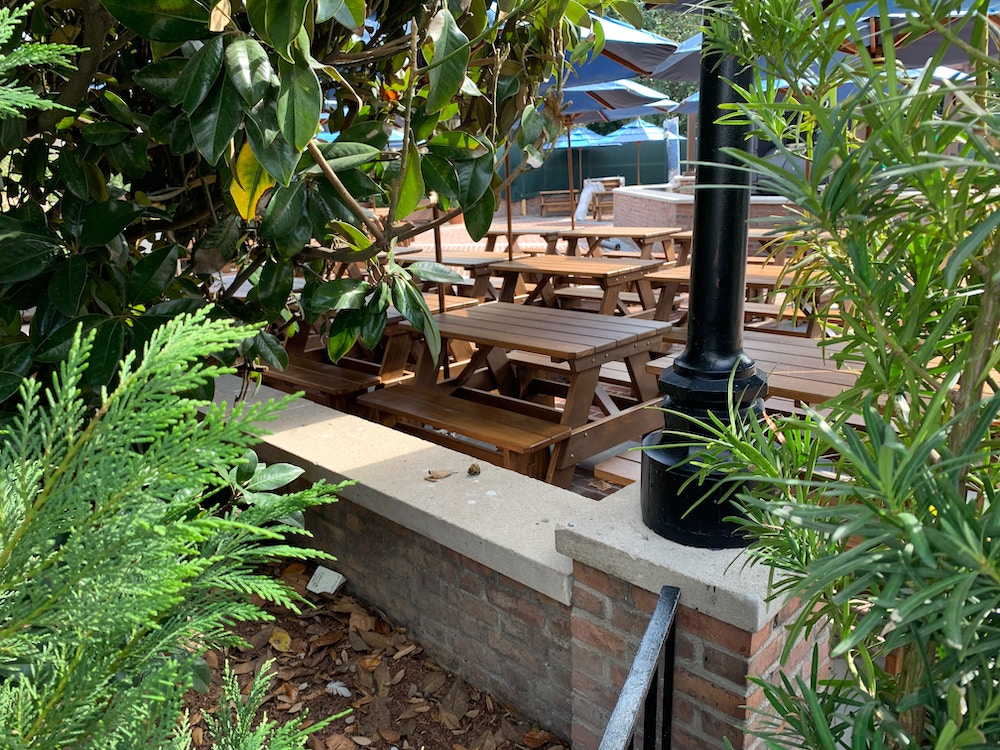 Below is a look at concept art detailing what the restaurant will look like once completed. You can see the walk-up bar windows, the smoker and shed in the middle, as well as the blue umbrellas and picnic-style bench seating all around. 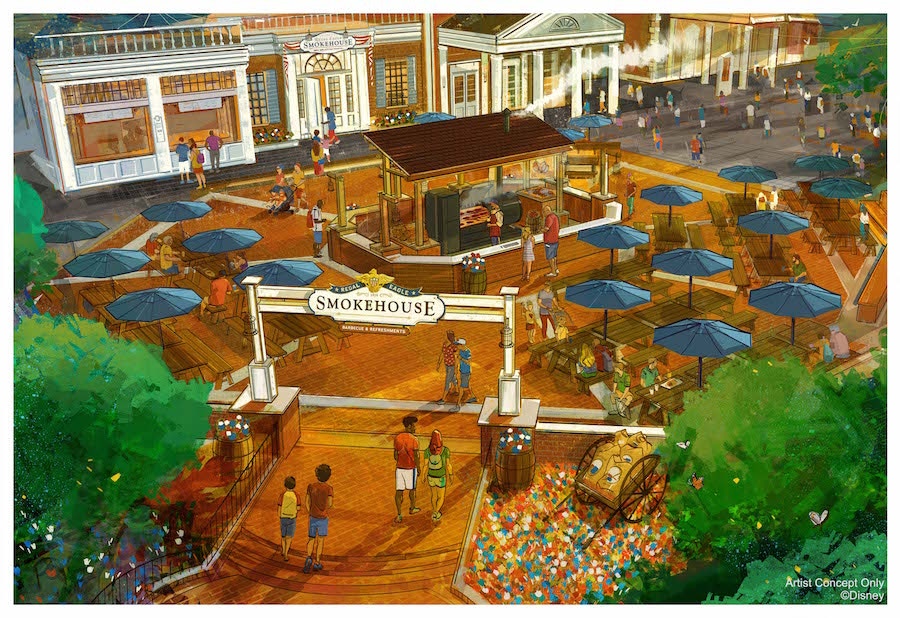 No concept art has been revealed for the restaurant’s interior, so we’ll just have to wait and see until Sam Eagle decides to open his grand Centennial cook-off.

Disney 100 Years of Wonder Celebration Kicking Off at Disneyland Resort in January 2023October 6, 2022
All Items With Prices in the 2022 EPCOT International Food & Wine Festival Event Logo Merchandis...July 14, 2022
PHOTOS, VIDEO: 'Take A Peek Behind the Artistry' of The Making of the Disney Fab 50 Character Collec...February 6, 2022