Tuesday, February 12th brought about the first day of the new “Cinderella 70th Anniversary” version of Early Morning Magic – Fantasyland at the Magic Kingdom. You may recall that we reviewed this event when it last changed in December 2018, adding more attractions and a revamped breakfast.

Taking place for the next few weeks is the special “Cinderella 70th Anniversary” edition of the event, which Disney describes as follows:

Get ready to have a ball during Disney Early Morning Magic when Fantasyland celebrates this Disney classic in early 2020.

From February 11 through March 3 2020, this limited-entry, early-access experience will feature a Cinderella twist! In honor of the film’s milestone anniversary in February, we’ll be inviting a few special Characters to this royal occasion—and adding a sweet touch to our all you-care-to-enjoy breakfast.

You can also meet Cinderella herself at Princess Fairytale Hall and take a spin on the Prince Charming Regal Carrousel.

Be sure to catch this enchanting addition before the spell is broken and everything returns to the way it was before!

Check-in for the event begins at 7:30 AM at the Magic Kingdom turnstiles. On our morning, it was done at the left-most turnstiles, separating Early Morning Magic guests completely from those with breakfast reservations or who just arrived early. 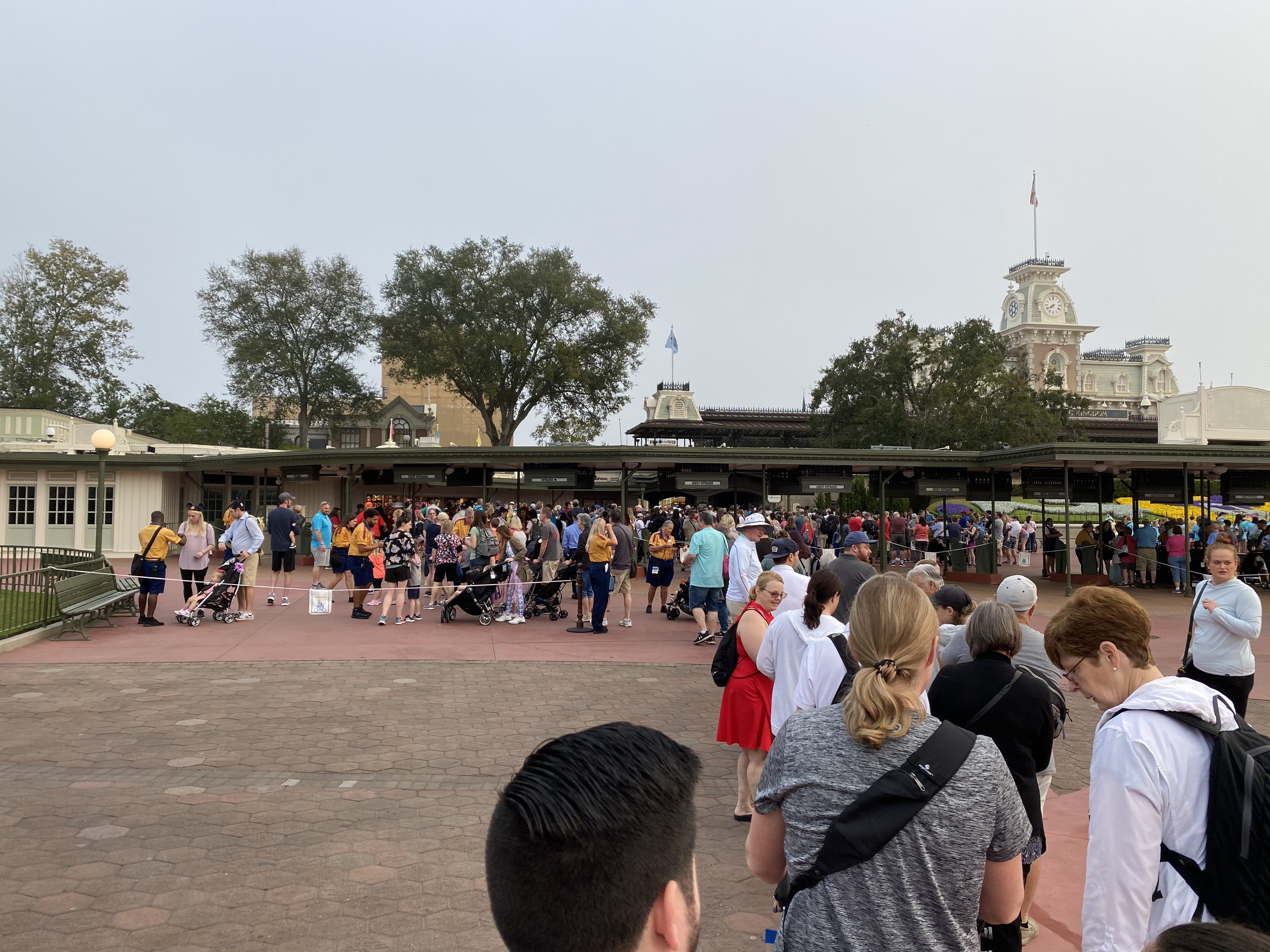 We waited in this short line to check in, and then were given our wristbands. 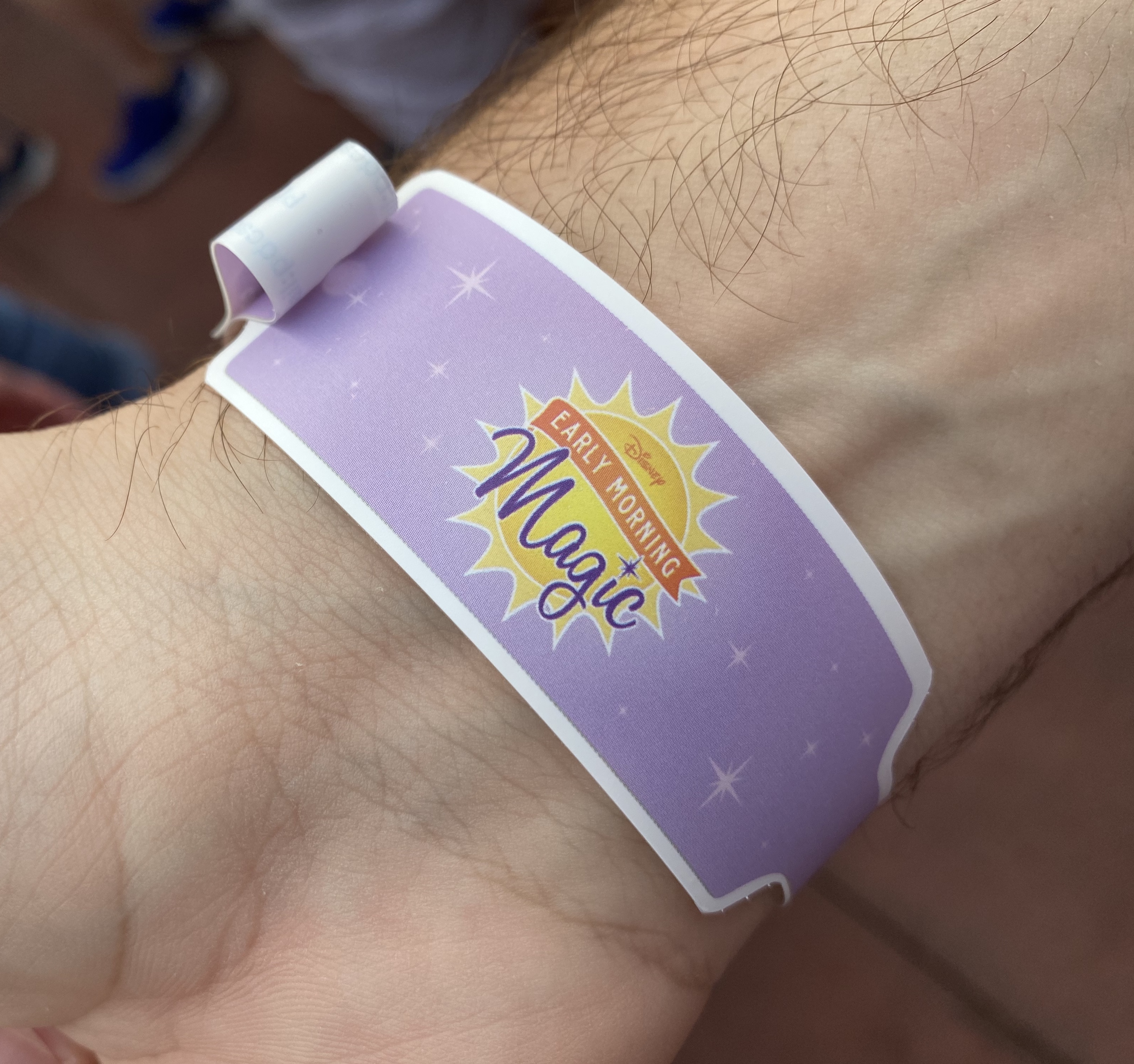 Guests are given wristbands which admit them to Fantasyland, keeping other guests out of the area. You’ll see quite a few con-artists try to talk their way through, but cast were checking for wristbands thoroughly at checkpoints and again at attractions. Once we had our wristbands, we tapped into the park and waited in the holding area in front of the Main Street Train Station until 7:45am. 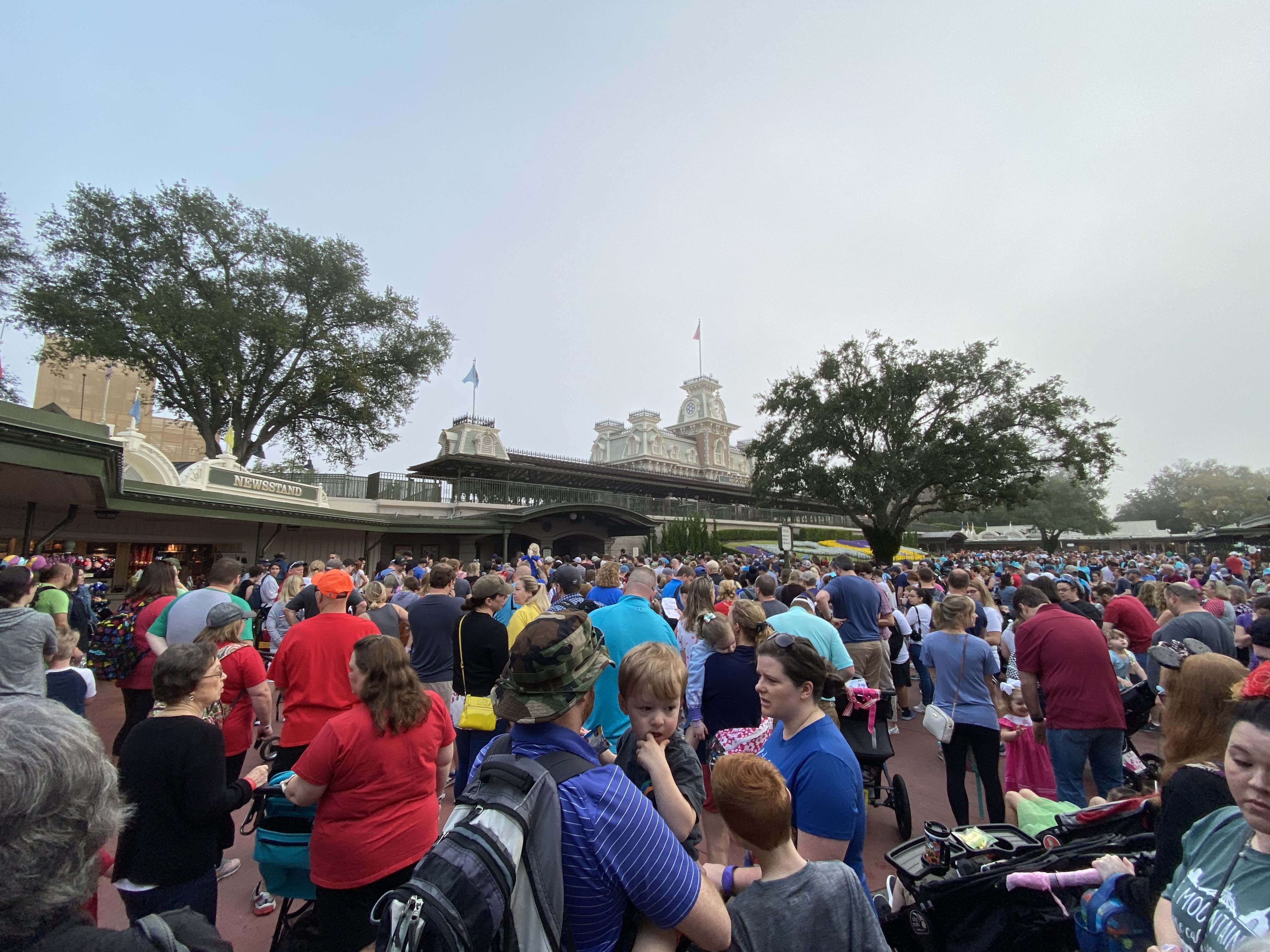 All of this crowd on the left side of the station is for Early Morning Magic. The guests off to the right are for other Magic Kingdom offerings. Between 7:30 and 7:45 AM, guests are held at the train station, and then at 7:45 AM are permitted to proceed to Fantasyland. Entry to Fantasyland is currently only permitted via the walkway behind Cinderella Castle from Liberty Square. 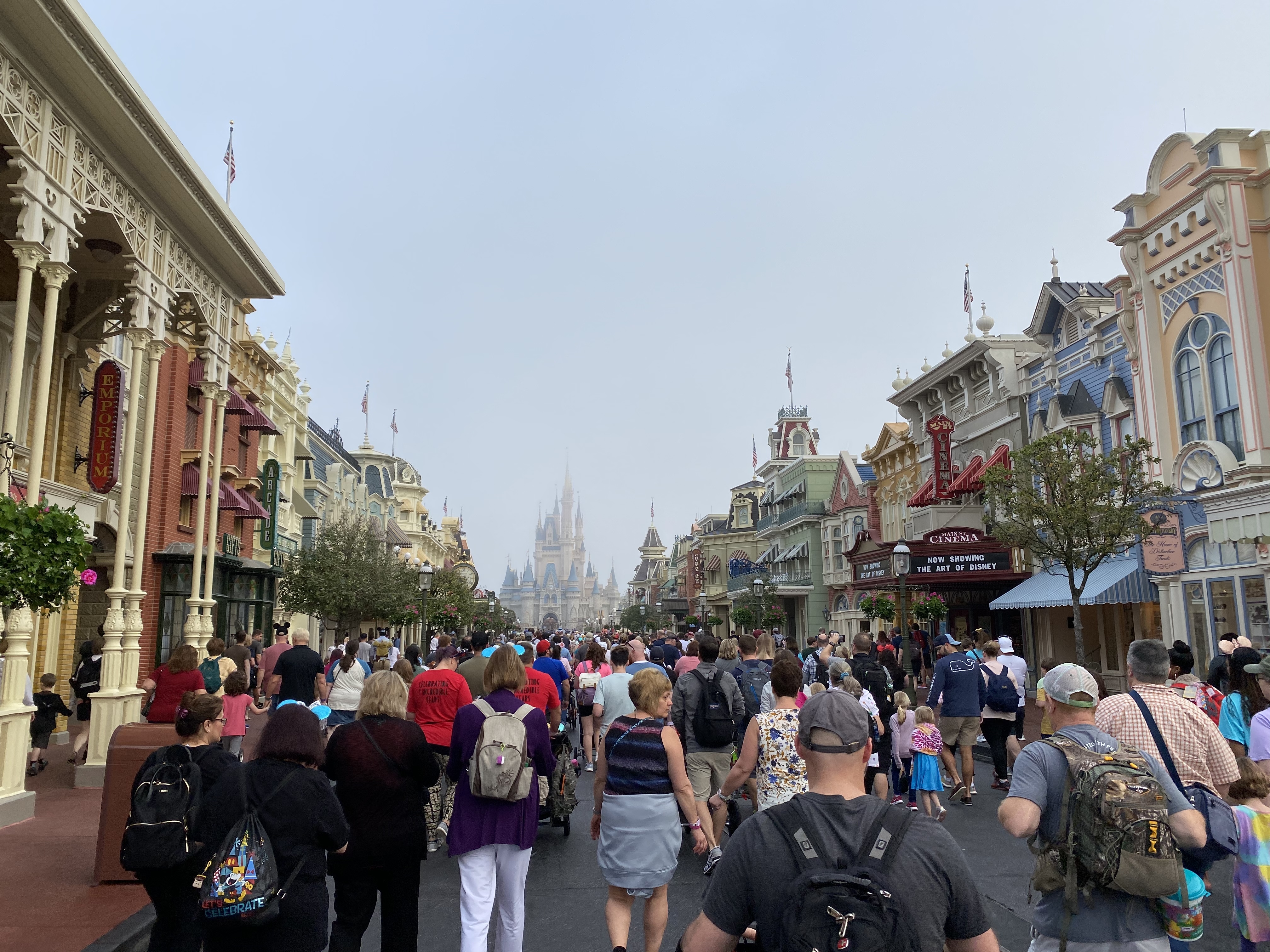 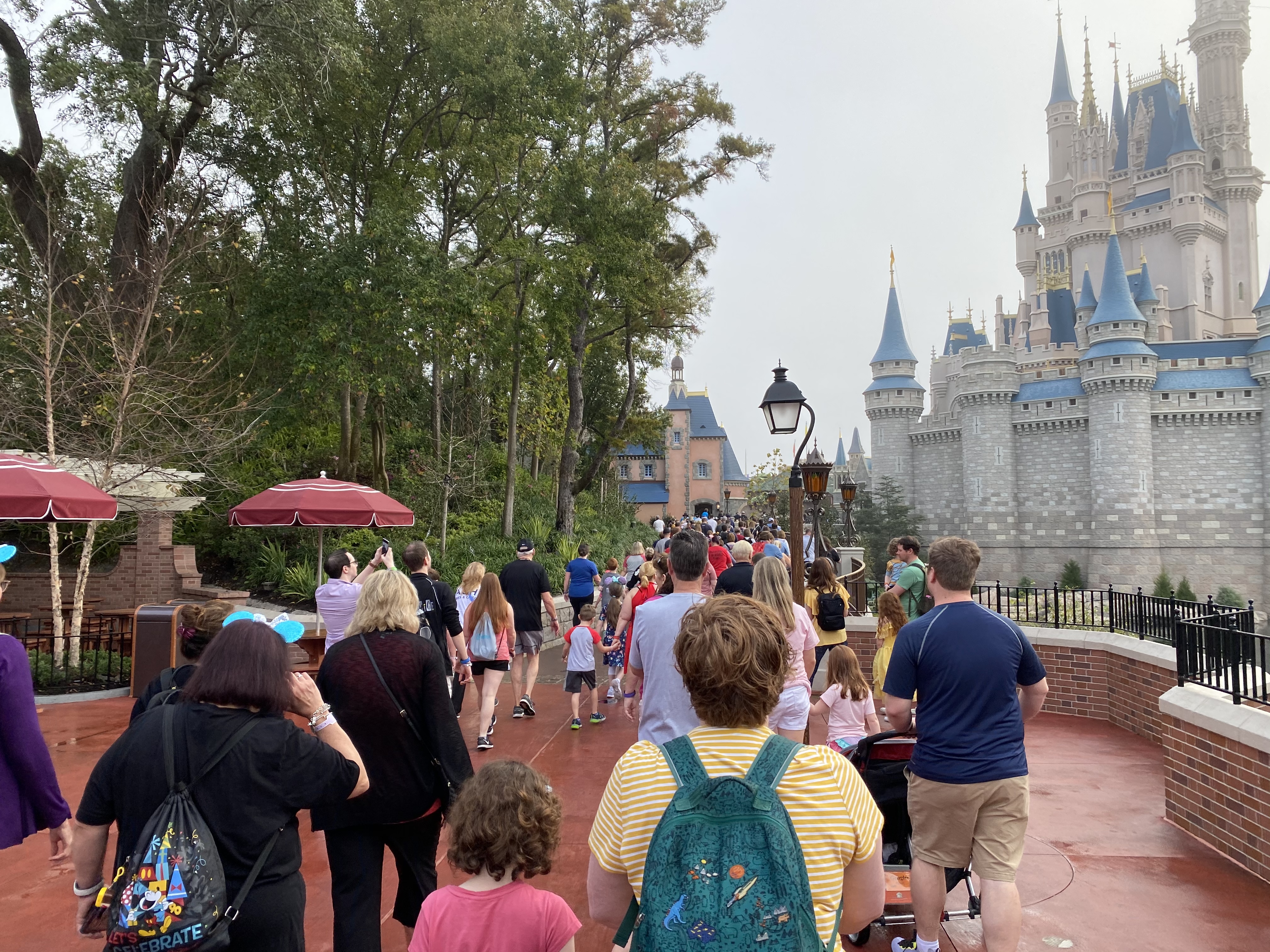 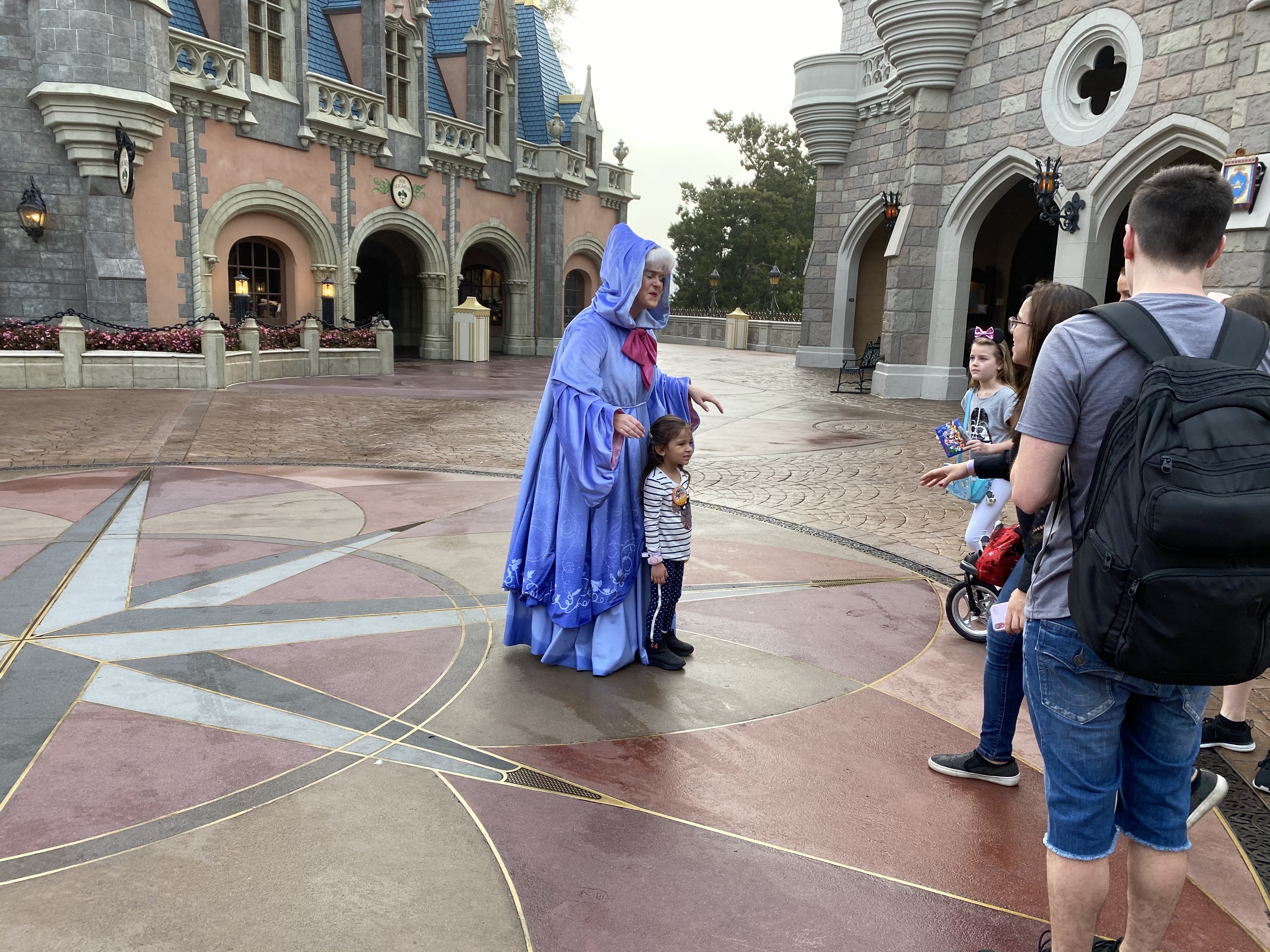 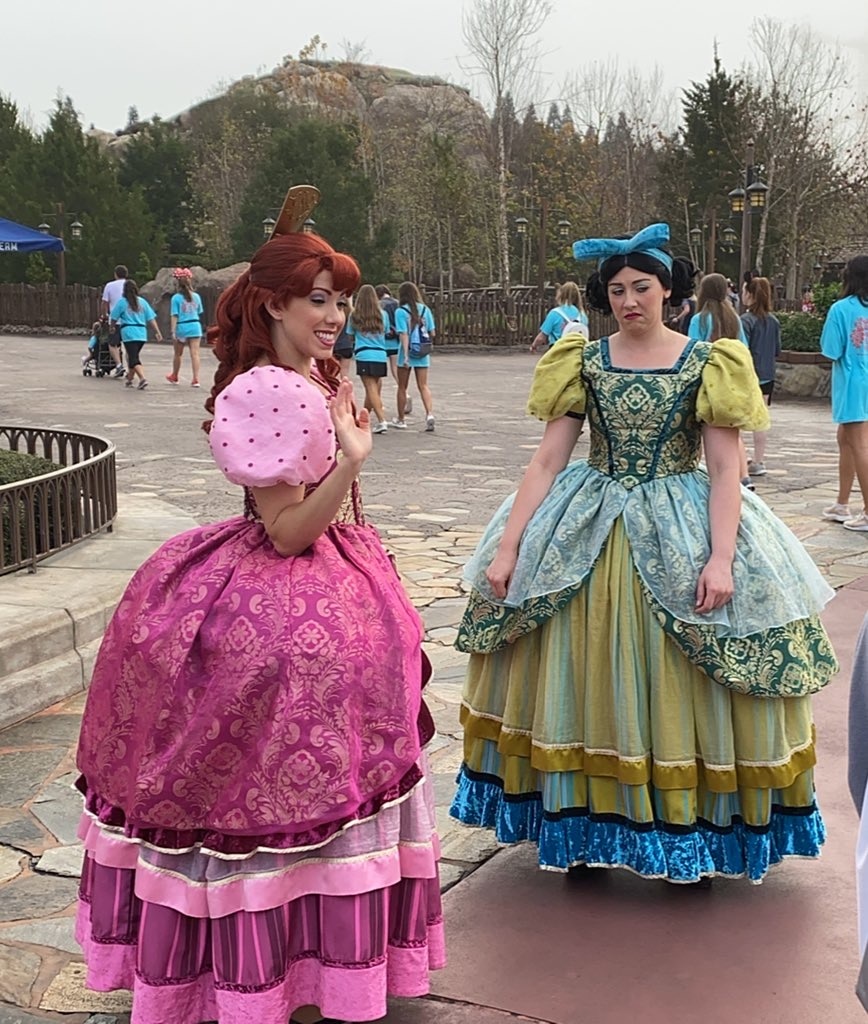 The added offerings for the Cinderella 70th anniversary include 3 roaming character meet and greets. You can find the Fairy Godmother, Anastasia and Drizella, and Suzy and Perla making the rounds in the middle of Fantasyland (near the carousel most of the time). They won’t normally allow there to be a queue to meet each character, but asking for a photograph or an autograph will be enough to gain you the interaction you desire. They’ll be out until about 8:40am-8:45am. Once we met all of the characters, we began our morning at Peter Pan’s Flight, riding the attraction two times in succession, followed by three rides on Seven Dwarfs Mine Train and one on The Many Adventures of Winnie the Pooh (all in that order). At the longest, we waited five (5) full minutes to ride Mine Train and Peter Pan’s Flight, but on other occasions, the wait for either was much shorter.

The event is advertised as taking place from 7:45 AM to 10:00 AM. In reality, the park opens to the public at 9:00 AM, and so the attractions are overrun with day guests by about 9:01 AM. The only exclusive benefit after 9:00 AM is the breakfast at Cosmic Ray’s Starlight Cafe, which is still closed to the public. 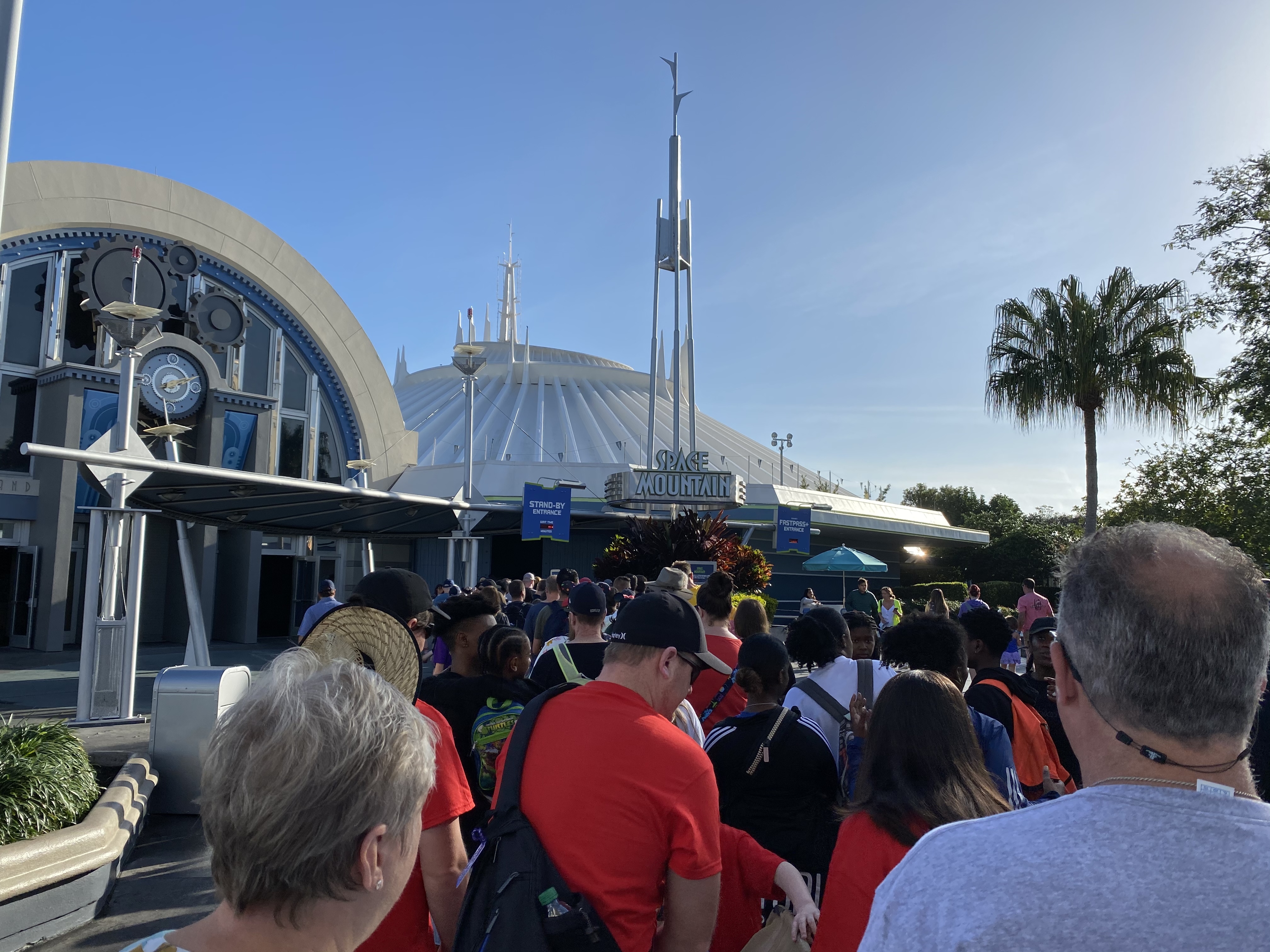 At 9:00am, we ran over to Space Mountain to knock out another headliner before having breakfast. We waited brought 10-15 minutes for that, made a restroom stop, and then arrived at breakfast around 9:30am. 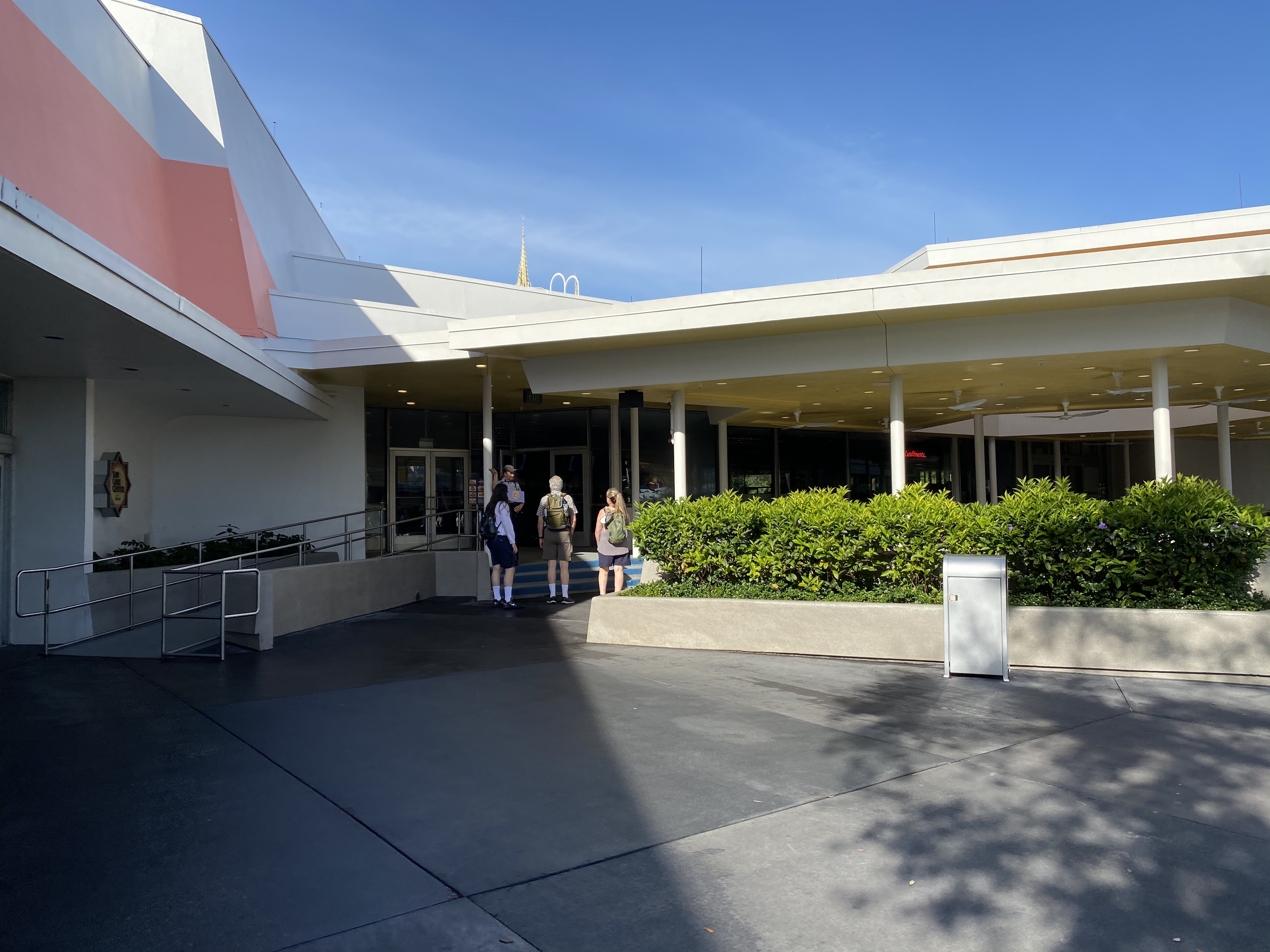 If you come from Space Mountain (or other Tomorrowland attractions), you can use the doors by Star Traders to enter Cosmic Ray’s. 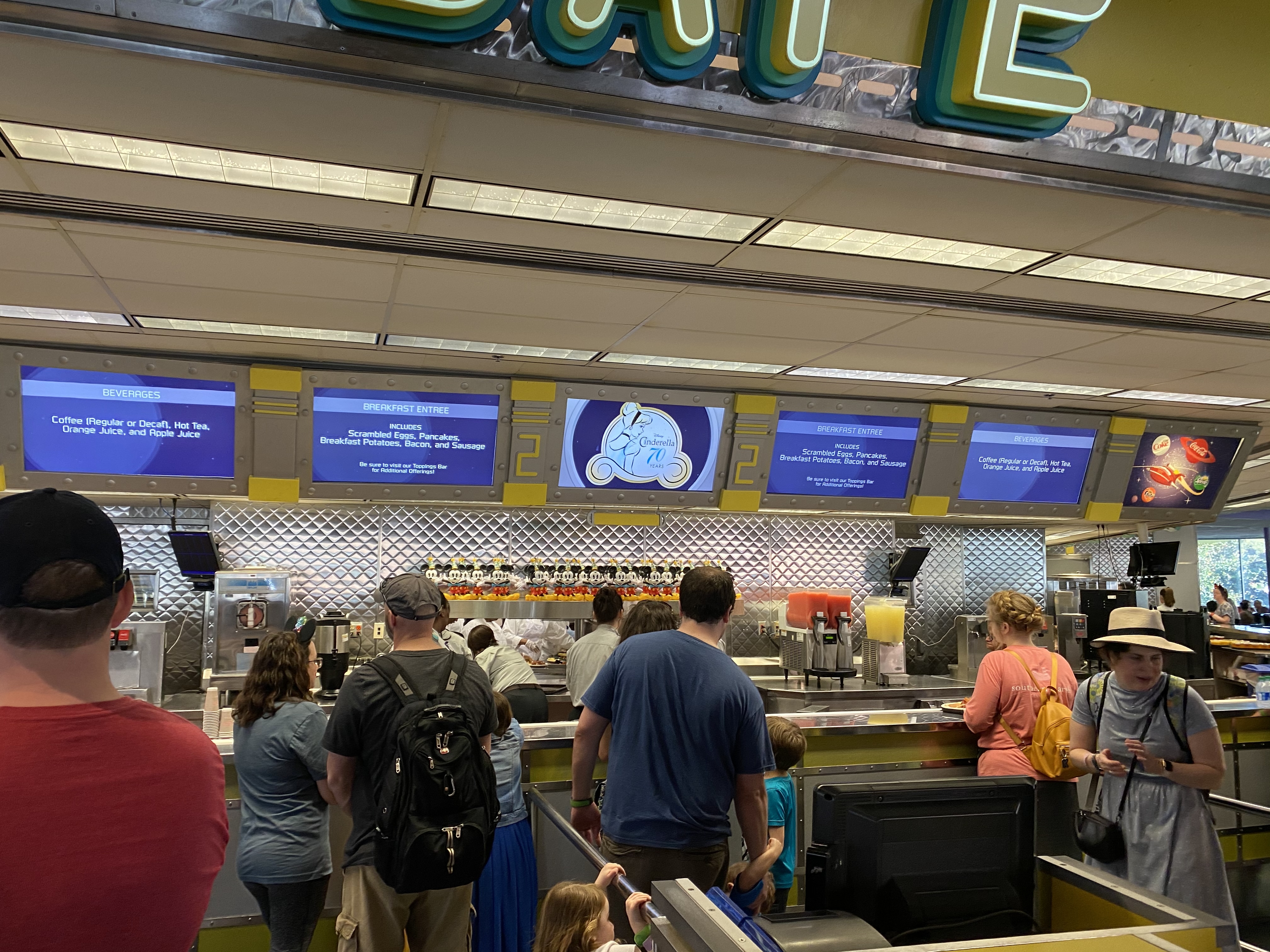 For breakfast, each guest receives a plate of hot food and a glass of juice at the counter (Bay 2 was initially the only one open, but by 9:00 AM Bay 3 had also opened). You can go back up at any point and get another plate and more drinks if you wish. Other drinks include chocolate milk, coffee (decaf or regular), hot tea, and apple juice. The Toppings Bar was converted to a continental buffet with pastries, oatmeal, yogurt, and charcuterie. This setup had the benefit of the hot food being hotter and fresher when received than it would be from a buffet, with the tradeoff being a minor wait at peak time (roughly 9:15am-9:50am).

Above is a picture of the breakfast offerings from December 2018. Below you’ll see what we got on this visit. The sausage links were replaced with a sausage patty at some point in time. The breakfast food was typical of most Disney counter-service offerings. Scrambled eggs, bacon, sausage, pancakes, and breakfast potatoes were all on par with my expectations for a counter-service location. Where this meal was a step above expectations was at the Toppings Bar. Instead of lettuce and tomatoes, we were treated to fresh fruit, oatmeal, ham and salami, and two cheeses, plus croissants, cinnamon rolls, and danishes at an adjacent station. 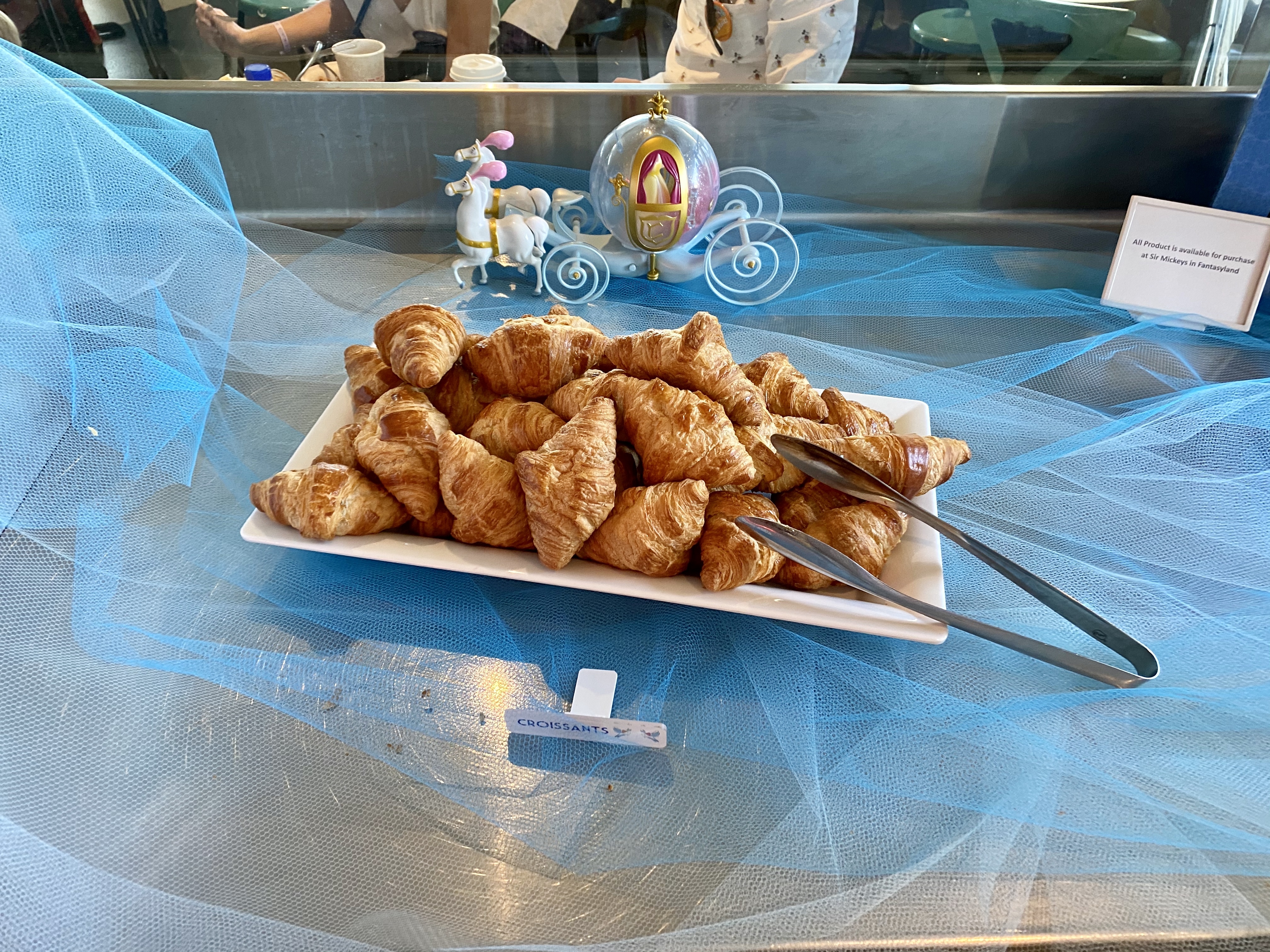 The bars are lightly decorated with blue fabric and Cinderella props. Kudos to Disney on the little themed signs as well. The danishes and cinnamon rolls are decorated with icing for the Cinderella 70th anniversary version. 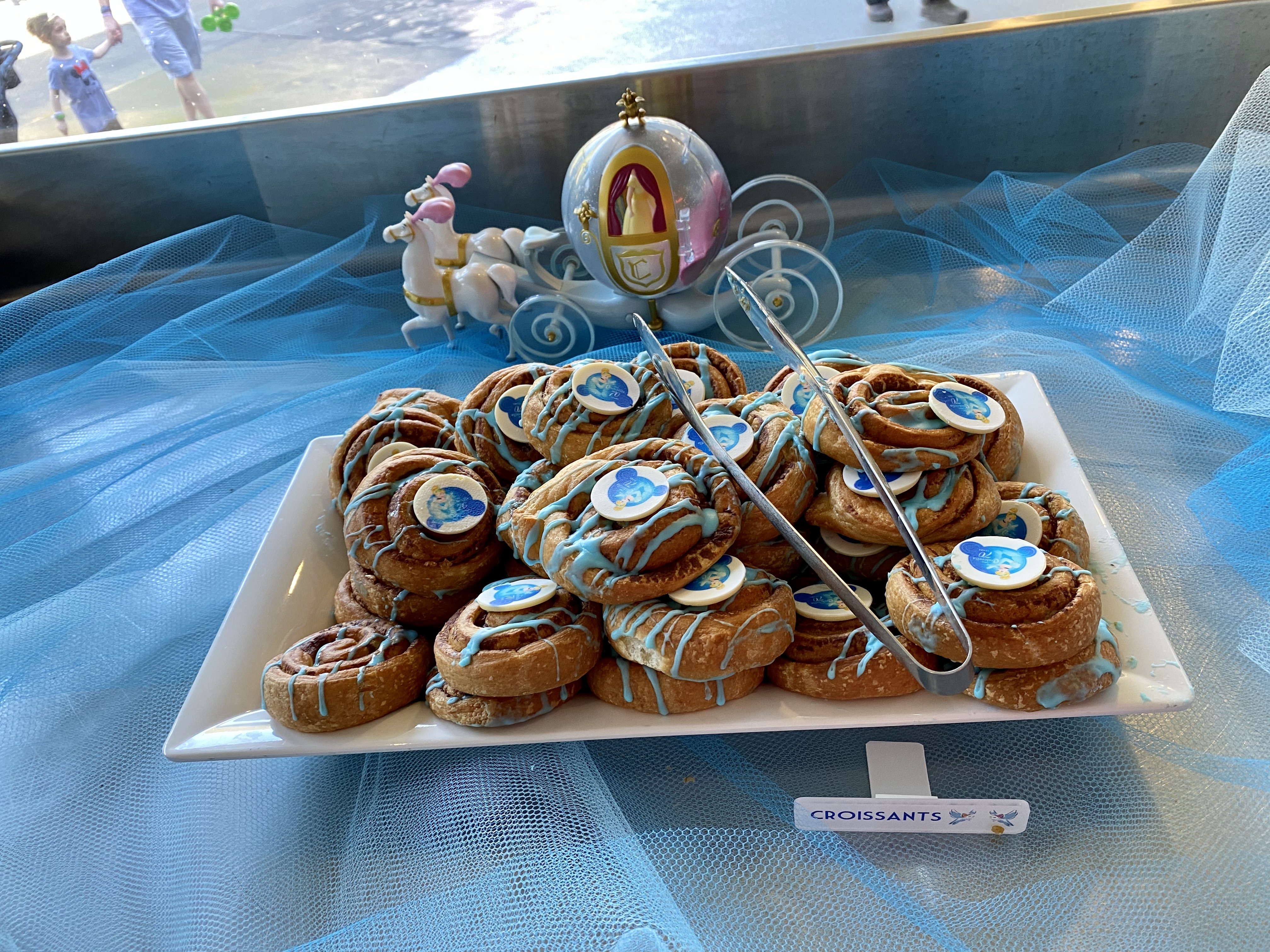 The cinnamon roll is also topped with a special chocolate piece. Pay no attention to the sign saying “CROISSANTS”. 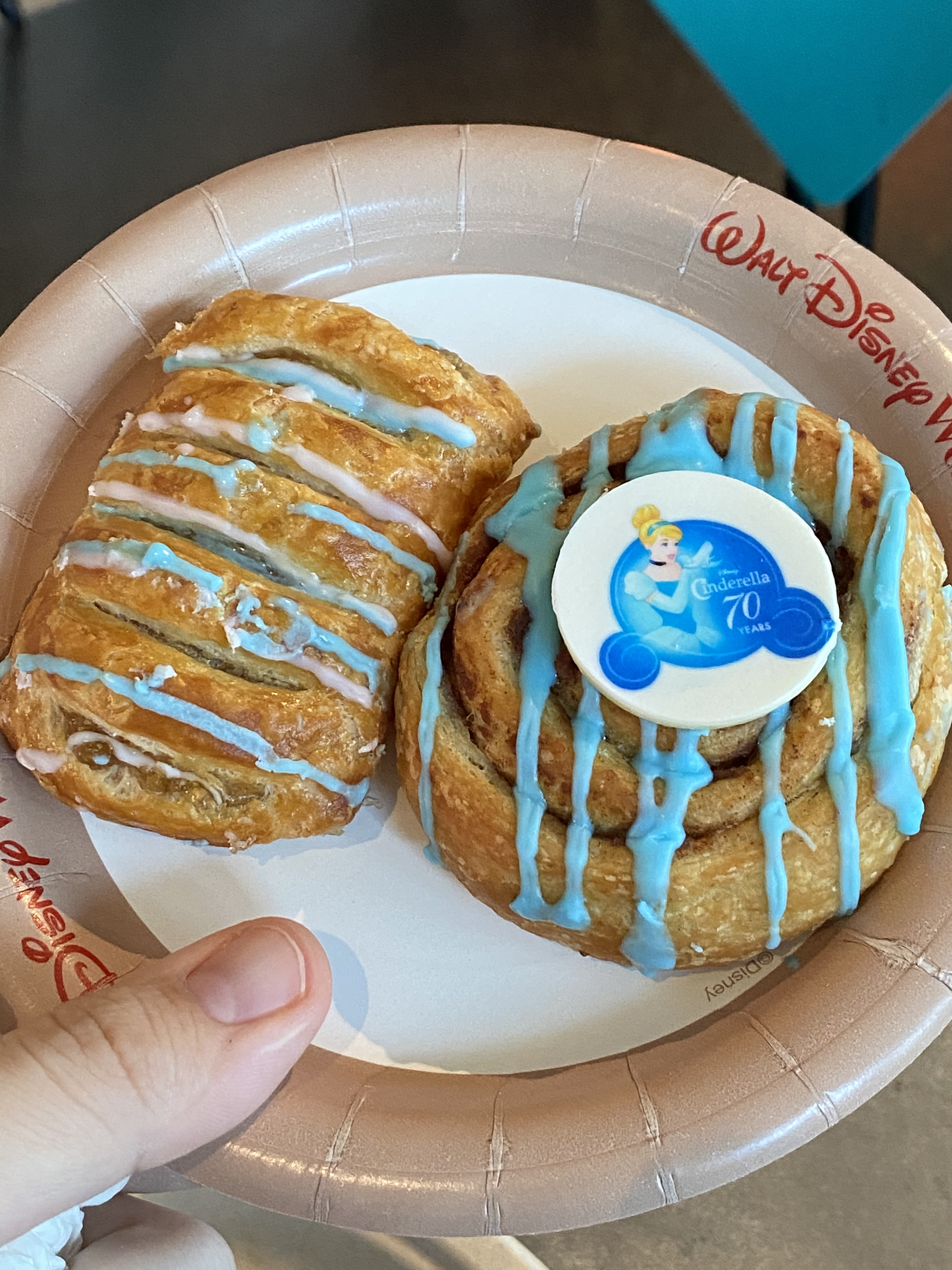 The new decorated pastries were fine, but I miss the twist (Cheshire Cat Tail) that we got back in 2018. Both the ham and salami were quite good, and the cheeses were surprisingly decent as well. One was a sharp white cheddar, creamy but tangy, and the other was an aged gouda, crumbly and nutty (think Beemster).

I’ve stopped being negative of these events since having reviewed most of them, and I think you know by this point that I’ll say Early Morning Magic can be beneficial depending on your needs. It’s basically having Fantasyland mostly to yourself for 75 minutes, plus a rather fine ~$15-20 counter-service breakfast. This is, however, also on top of the required regular theme park admission. Early Morning Magic can be a tremendous value in many circumstances, and on this particular day, the Magic Kingdom was quite crowded. If your goal is to ride Seven Dwarfs Mine Train and/or Peter Pan’s Flight with no wait or more than once, this is a great way to do it. If you have only one day in the Magic Kingdom and want to see and do everything, Early Morning Magic will give you a tremendous head start. If your kids love Fantasyland and don’t want to do anything else in the Magic Kingdom, this will bring a smile to their faces (and to yours too). Tacking on the meet and greet characters only adds to the value, hopefully something that will rotate through other Fantasyland friends as the months progress, rather than just being removed in March.

If you have a week or more at Walt Disney World, and enough days planned in the Magic Kingdom to have gotten FastPass+ reservations for Seven Dwarfs Mine Train, Peter Pan’s Flight, Princess Fairytale Hall, and Winnie the Pooh, then Early Morning Magic probably isn’t necessary, but you may just want to try it for the incredible convenience. That being said, I much prefer Disney Villains After Hours at the Magic Kingdom, which will give you 5-6 hours in the park (three with only other event attendees) without the necessity of a regular park ticket. Every attraction from this event (minus Princess Fairytale Hall) is available during that event, plus much more.

From a value perspective, I could go either way on this. Certainly the number of attractions in this new offering makes the proposition more compelling. The $89 price point for Early Morning Magic is high, but when you add in the breakfast, it makes it a better deal. These are truly luxury offerings at the current price points, but then again, most Disney trips are luxury vacations at today’s prices. Those with adequate disposable income will certainly find the Early Morning Magic event a very calm, but efficient way to cover almost everything in Fantasyland with the least amount of waiting and crowds possible, but I’d again suggest seeing if the Disney Villains After Hours event could work better for you.