BOOK REVIEW: Return to the Sea in “Part of Your World: A Twisted Tale” by Liz Braswell

Part of Your World is the fifth book in the Twisted Tales series. At the time of writing, the series consists of eight titles published over the past five years, with two more set for publication in 2020 and hopefully many more after that. Each of the novels is stand-alone, meaning you can read whichever stories intrigue you the most in whichever order you feel like. For reviewing purposes, I will be reading the full series in chronological order of publication, and I will be completely honest and spoiler-free in letting you know what I thought!

Ariel, listen to me. The human world, it’s a mess. Dive into Twisted Tales, it’s better than anything they’ve got up there! 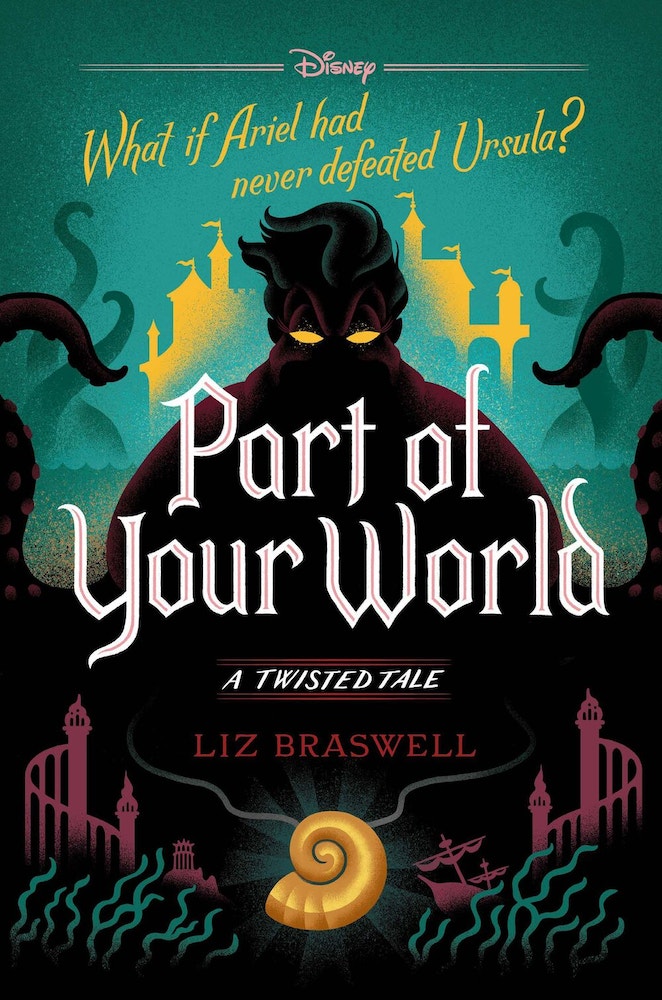 For Part of Your World, Braswell has taken the story of The Little Mermaid and twisted it just before Ariel could stop Eric marrying Ursula, leading to the sea witch herself becoming queen. Fans of the movie will know that, had this happened, Ariel would have been condemned to be one of those creepy worm thingamabobs on the floor of Ursula’s cavern forever. In Part of Your World, however, King Triton has sacrificed himself for his daughter, and Ariel has been banished to the sea – albeit voiceless – to become queen of Atlantica in her father’s place.

The novel is set after years have gone by and Ariel, having received some important news, decides to grant herself legs and return to land. So if you’re thinking about Disney’s most underrated sequel The Little Mermaid II: Return to the Sea, this is pretty much the opposite. Up on the shore, Ursula bathes all day, out in a boat Eric fades away. Whilst Ariel’s devoting full time to moping under the sea.

Something I deeply appreciate is that Braswell hasn’t created any new characters for us to warm to in this book, unlike other novels in this series. The only exception to this would be Jona, grandchild of Scuttle, humerously named after Jonathan Livingston Seagull. Flounder, Sebastian, and all the characters we know and love make a return too, and it’s hard not to imagine their voices as you read the dialogue. Eric has a ponytail now (“but Daddy, I loved him as he was!”). Ursula is written to be perfectly evil, however with an intriguing aura of mystery about her. Usually, Disney villains’ motives are clear, but the queen is up to something throughout this book and it’s interesting to work out her plans for the kingdom.

Will Eric and Ariel get back together? What would Ariel pay to spend a day warm on the sand? Will Sebastian finally nail that girl’s fins to the floor? You’ll have to read the book to find out.

It’s a well-known issue that The Little Mermaid has some questionable plot holes. Critics––you give them an inch and they swim all over you. I’ve been hearing cries of “why didn’t Ariel just write a note to Eric?” for years. I hate to say it, but there’s plot holes in this too. If you’re not going to be able to accept that Ariel’s trident can give people legs but not voices, maybe steer clear. But, all in all, I’d definitely recommend you read this book. My only other complaint is one I’ve said before: that these novels are particularly lengthy. I can’t say this will fall into the thrilling, must-read-in-one-sitting category, but the easy-reading nature of the book and uncomplicated storyline makes this tale perfect for the occasional reader.

If you’ve read this book, I’d love to know what you thought! Make sure you drop a comment below.

Make sure you check out my previous reviews of the Twisted Tales series: Book One: A Whole New World, in which Jafar gains reign of Agrabah, Book Two: Once Upon a Dream, where Aurora is finally given a voice, Book Three: As Old as Time, which sheds new light on Belle’s backstory, and Book Four: Reflection, and join Mulan and Shang to journey through the underworld. Next up, heigh-ho, heigh-ho, on a quest with Snow we go, so stay tuned for that review. Have you read any of the Twisted Tales series yet? Which characters’ stories would you like to see twisted? Let us know!

Previous
Recreate Your Favorite Disney Ride Pre-Show for a Chance to Win $50 Corbucks!

Next
SHOP: “The Making of Disney’s Jungle Cruise” Promises An In-Depth Look at the Film and Classic Attraction; Now Available for Pre-Order