While nearly all of Walt Disney World is closed due to the Coronavirus (COVID-19) pandemic, legendary Walt Disney Imagineer Joe Rohde is offering a different kind of tour of some of his work. 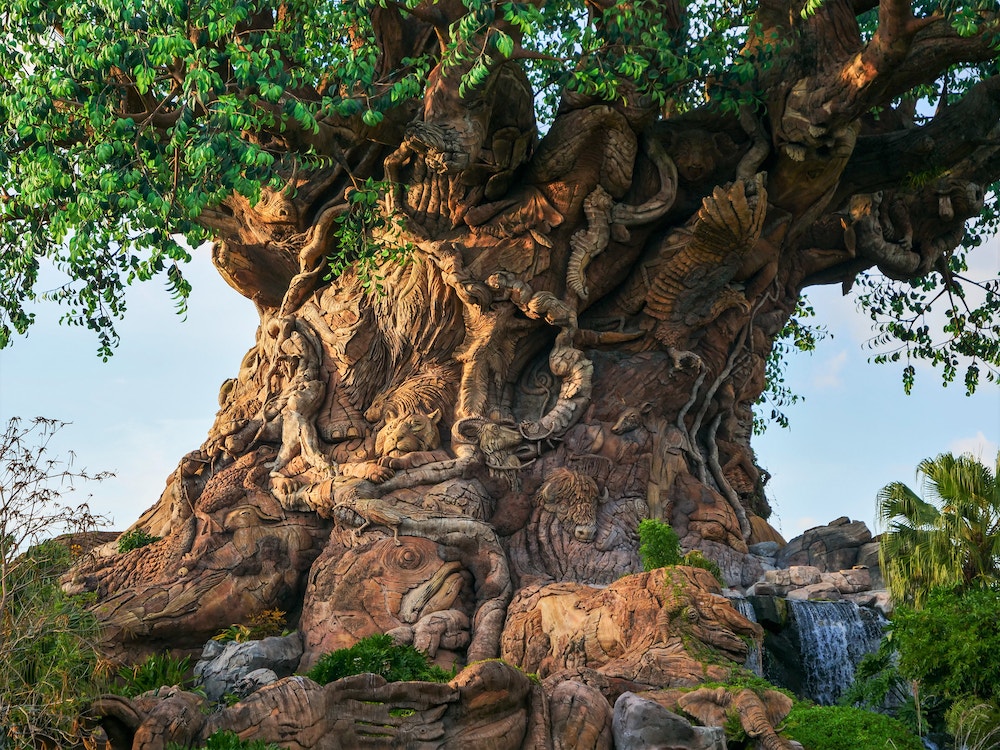 In a series of post on his Instagram account, Rohde explained the thesis behind the design of Disney’s Animal Kingdom’s Tree of Life. The tree was intentionally designed to be natural, to reflect the natural aesthetic of the park. Most fans know that the carvings on the tree are modeled after a wide variety of animals, but you may not know that it’s supposed to invoke a kind of magic through art, to prove that nature rewards those that pay attention to it. As Rohde explains, “Since nature is everywhere anyway, we also need to signify that this place is exceptional… in some way ‘magical.’ Thus… a strange tree. A tree whose body disappears under patient observation to become nothing but animals. [It’s] a metaphor for the rewards nature can provide to the careful observer. But since we all know it has been made… it is a work of art… it also signifies the intent to communicate… to tell a story. In fact, the Tree promises two things. 1. This place is a story place about animals. 2. This place is a designed place full of virtuoso accomplishments.”

Well. It doesn’t look like we are meeting up at Disney’s Animal Kingdom real soon, so how about a tour of my personal photos of the park. If you haven’t been to the park, or ever heard of it (which is definitely a thing on the West Coast) perhaps this will help people understand what it is. Maybe even convince some skeptics to try it out. If you have been there, it might just be more inside knowledge. So. In the middle of the park is the centerpiece and icon. The Tree of Life. Named for the old fashioned 19th century diagram of interconnected spread of life. Because the park is dedicated to the themes of animals and their relationships to humans,(good and bad) we needed a non-architectural icon…something “natural.” Since nature is everywhere anyway, we also need to signify that this place is exceptional..in some way “magical.” Thus..a strange tree. A tree whose body disappears under patient observation to become nothing but animals. A metaphor for the rewards nature can provide to the careful observer. But since we all know it has been made..it is a work of arty…it also signifies the intent to communicate..to tell a story. In fact, the Tree promises two things. 1. This place is a story place about animals. 2.This place is a designed place full of virtuoso accomplishments. (See Aristotle’s essay on Mimesis.)

In a later post, Rohde discussed the selection process behind the animals represented on the tree, as well as the theming of the animal encounters of the park’s lands. He expounded the encounters are concerned with how humans coexist with animals and the natural world. Africa, through Kilmanjaro Safaris and Gorilla Falls Exploration Trail, calls into question how humans use resources like ivory and rhino horn, despite their negative impact on animal populations. Asia is focused on habitat loss and how humans and animals can coexist in the same environment, as demonstrated in Kali River Rapids and Maharajah Jungle Trek. And while it may not offer any earthly creatures to encounter, Pandora – The World of Avatar is concerned with pollution, and how we can reuse resources to reduce our impact.

Let’s stay with the Tree for a moment. If you pay attention to most of Disney’s Animal Kingdom You’ll see that when you come up on animals, it is usually in the context of some story. In Africa that story ultimately reflects upon the question of resources, like ivory and rhino horn. Asia is chiefly concerned with habitat loss and habitat use and how animals and humans can live side-by-side. I Pandora with pollution. So, what is going on in front of the Tree? When we originally chose animals just around the tree, we chose them for their physical diversity, as demonstrations of the vast differences in shape as animals adapt to their various ecosystems. Kangaroos, porcupines, flamingos, macaws. Each of these animals has strikingly unique adaptations. A marsupial deer with the body of a giant hare. A rodent with really pokey hair. A bird with an upside down mouth. A giant parrot with nutcracker jaws. Something is at wrk here. A principal of life. These are observations which can be made but are not required. Because this is not an educational facility per se, we want people to pursue ideas at their own pace. As they might do in nature. My two boys to go walk yesterday in the nearby mountains… They noticed a number of red salamanders in the streams. That’s because they were paying attention, and so they noticed. I’m sure others walked right by. Animal Kingdom is a bit like that. It’s there for you with a lot of content, a lot of meaning, and a lot of research-based accuracy. You just have to look and ask.

As for the Tree of Life, Rhode explained that the animals were selected for their range of sizes and how the adapt to their natural habitats: “Each of these animals has strikingly unique adaptations. A marsupial deer with the body of a giant hare. A rodent with really pokey hair. A bird with an upside down mouth. A giant parrot with nutcracker jaws. Something is at work here. A principal of life.”

In addition, Rohde offered a blast from Walt Disney World’s past, by discussing the idea behind the Adventurers Club, along with some original concept art!

Rohde explained that the initial concept for the club was inspired by the Magic Castle in Los Angeles. And while the magic theming may not have been as obvious in its final form, some aspects of that did survive into the finished club, like the Treasure Room’s floating lantern effect. The idea was to play against guest expectations and offer a contrast to the “scripted” entertainment of the parks, hence why live actors and puppets were used with a lot of improv. But perhaps Rohde’s most fascinating insight is that the thesis of the club isn’t adventure, but rather a sense of belonging. No matter how different you may feel, there was always a home for you at the Adventurers Club.

Aficionados of defunct venues… This is the original sketch for the Adventurers Club which used to be at Pleasure Island…Which is now part of Disney Springs. I had a party at my house, I’m pretty sure it was actually a Halloween party, and Rick Rothschild, the producer of Pleasure Island came to the party, noticed the peculiarly eclectic nature of the house, called me into his office Monday morning and said “I think I have a job for you.” Originally this was going to be a magic club, like the Magic Castle in Los Angeles… And some vestiges of that intention survived through all the iterations… Particularly the floating lantern effect in the Treasure Room. The club played against peoples expectations. We knew that they would’ve spent a day in the park, and therefore, would be expecting scripted performances and expecting that all the animated objects to be programmed, not live, not able to see recognize them, talk to them, or interact with them. So we did a relatively unscripted show with lots of room for improv, and with a single exception, everything that moved or talked to you was a puppet, actually operated by one of the actors who have recently been on stage and probably already had a conversation with you. So these puppets knew an awful lot about you by the time they started talking. When we first started, costumes and performances were very sly, as close to realistic as we could get away with… But that was too subtle. We needed the characters to be broad enough that you knew they weren’t just weirdos, that there was actually a show going on.  People who attempt to emulate the Adventurers Club often mistake the theme. The core theme was not “adventure.” The club is a satirical deconstruction of a pompous adventure club. None of the key characters were successful adventurers.The core theme was “club”… Inclusion, recognition, and togetherness. It was about belonging. Everyone was welcome, and everyone was made to feel special. All the interesting props served as prompts for conversations. “If you come in here a stranger, you’ll exit as a friend. “That was part of the creed of the club… And that was the clearest expression of its theme

If you’re on Instagram, be sure to check out Rohde’s account for a masterclass on Disney Parks design!

EDITORIAL: The Long-Lasting Legacy of The Adventurers Club

Next
DISNEY+ REVIEW: “The Computer Wore Tennis Shoes” on Deep in the Plus