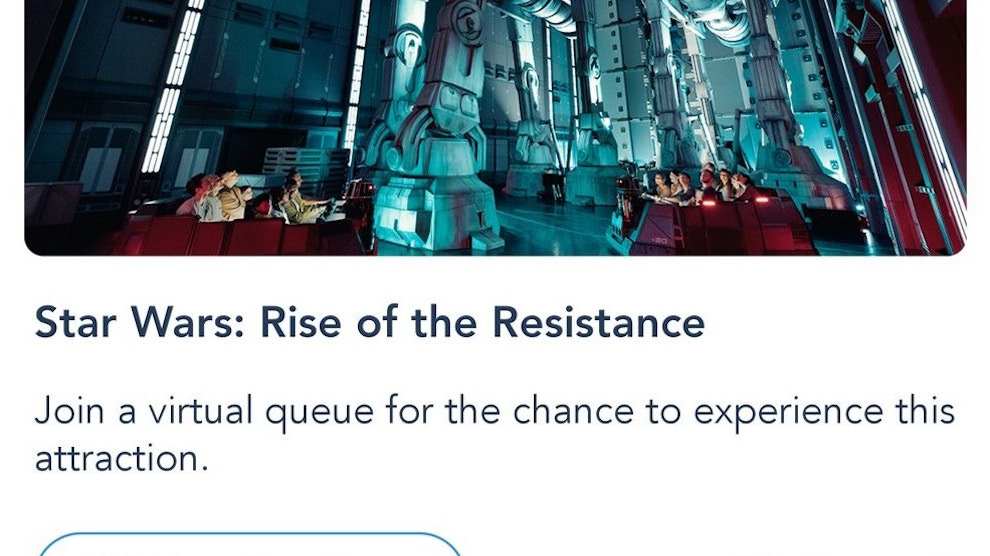 Here at WDWNT, we’ve been tracking the distribution of Boarding Groups for Star Wars: Rise of the Resistance since the ride debuted here at Disney’s Hollywood Studios, and then again after it opened in Disneyland. Today, we noticed some tinkering with the Boarding Group system, and as was first reported by Twitter user @Hastin, it appears an expansion of the Boarding Group/virtual queue system may be imminent for Disney Parks.

Wow so the new MDX/Disneyland app update totally changed the wording for Boarding Groups status, instead called "My Queues". Seems like there might be plans to extend it. pic.twitter.com/ewpGLw3RFS

Wording throughout the Disneyland App has changed most mentions of Boarding Groups to simply “virtual queue”, including a new section called “My Queues”, which appears to have slots for numerous attractions. Theoretically, the same virtual queue process could be used for the new WEB SLINGERS: A Spider Man Adventure attraction debuting with the Avengers Campus on July 18th.

Do note that these are currently just tests, and that the new “My Queues” screens won’t appear for all Disneyland App users until it’s finalized and fully rolled out.

Are you looking forward to the broader use of virtual queues across the parks, or bemoan the loss of the classic Stand-By queue? Let us know what you think in the comments!

This is just going to make the parks seem even MORE crowded. For everyone with a virtual queue reserved who is standing another t line, it’s like two of that person in the park, just like FastPass does. But now if you can have a FP for one thing and VQ for another , now there are 3 of you in the park.

Vote Up1Vote Down  Reply
PHOTOS, VIDEO: The British Revolution Ends A Rockin’ Run at the UK Pavilion in EPCOT
“Drawn to Life” by Cirque Du Soleil at Disney Springs Suspended and Postponed Indefinitely Due to Coronavirus (COVID-19) Pandemic Concerns
Comment