It’s Adventureland Day at Disneyland and we’re celebrating all things Indiana Jones, Jungle Cruise, and more! Best of all, The Tropical Hideaway has debut new sweet and savory items in the form of a new Loco Moco Bao and new Dole Whip swirls and floats! So grab your safari troupe and let’s trek on over to The Tropical Hideaway, you lucky people, you. 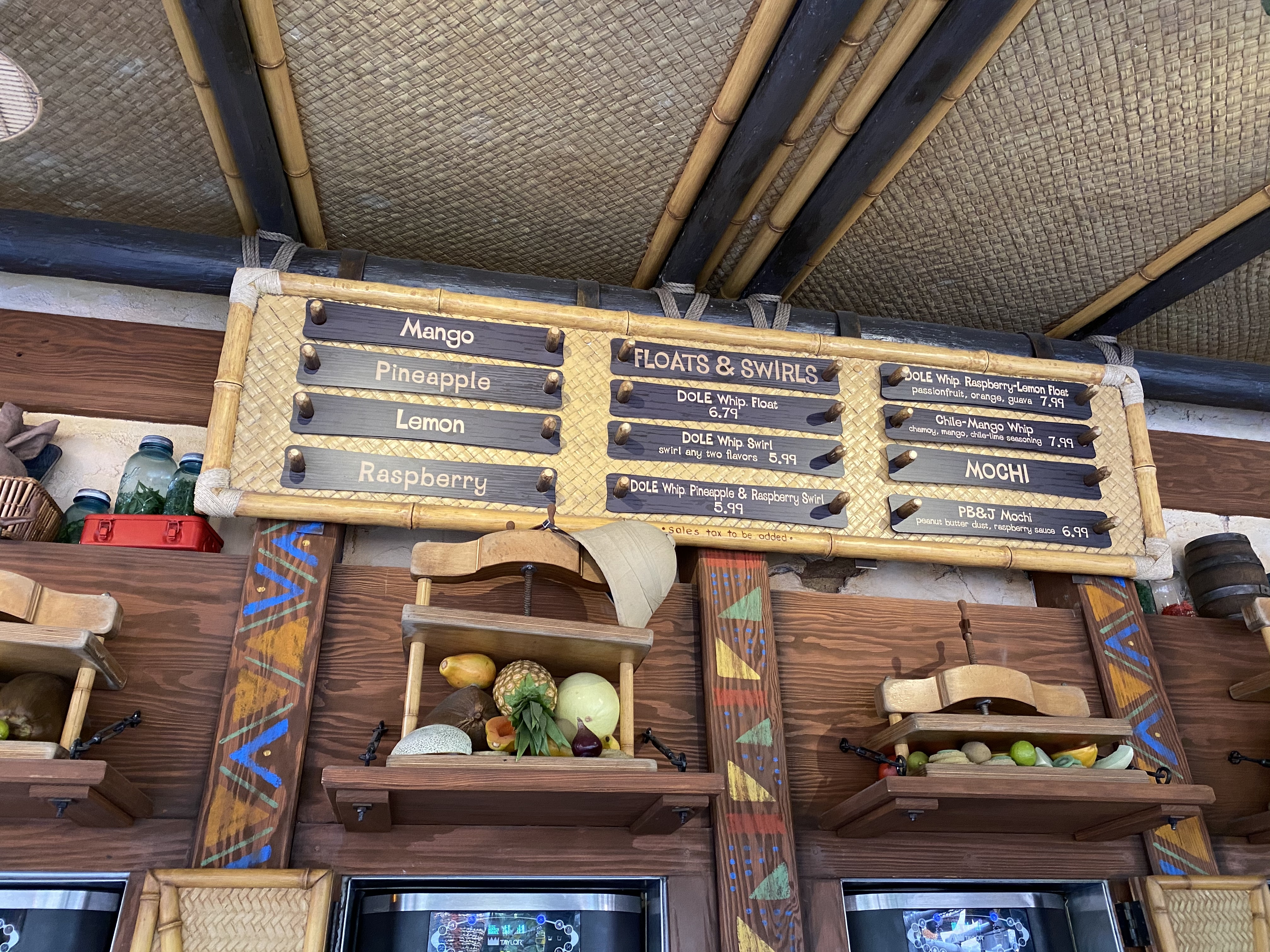 The updated menu at the location shows all of the new Dole Whip flavors that are available, plus the new floats, and the new PB & J mochi that recently arrived here, too. 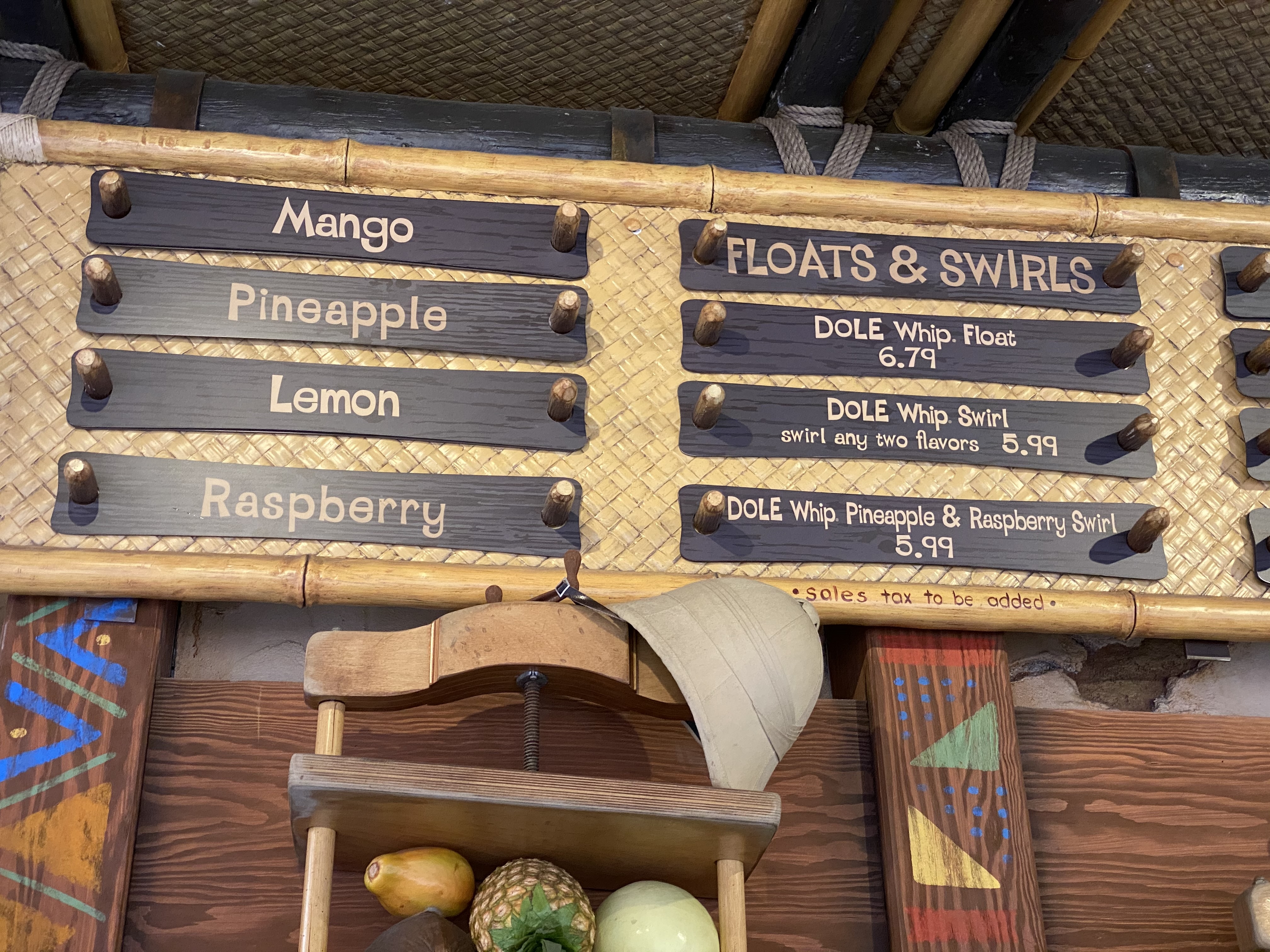 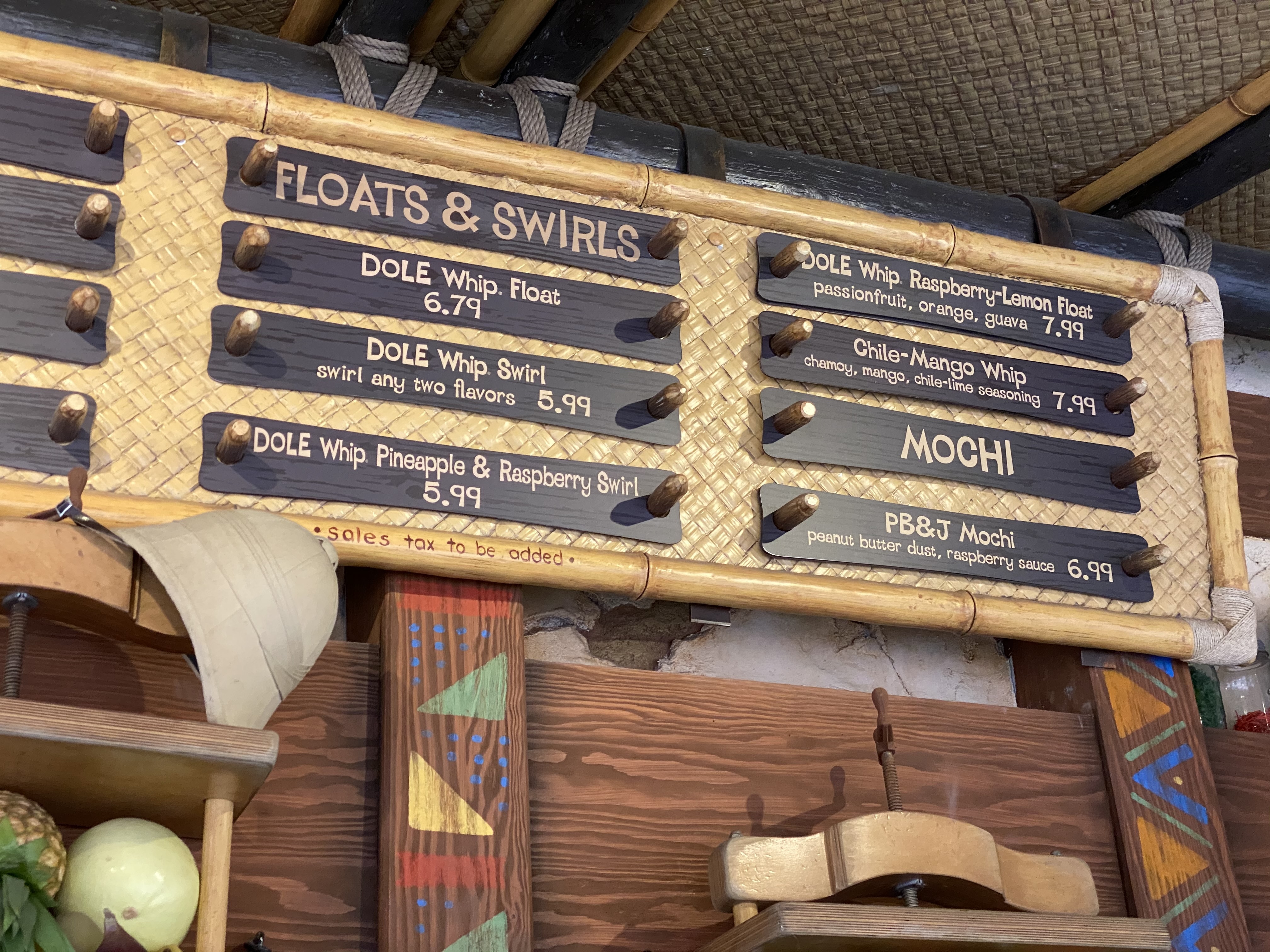 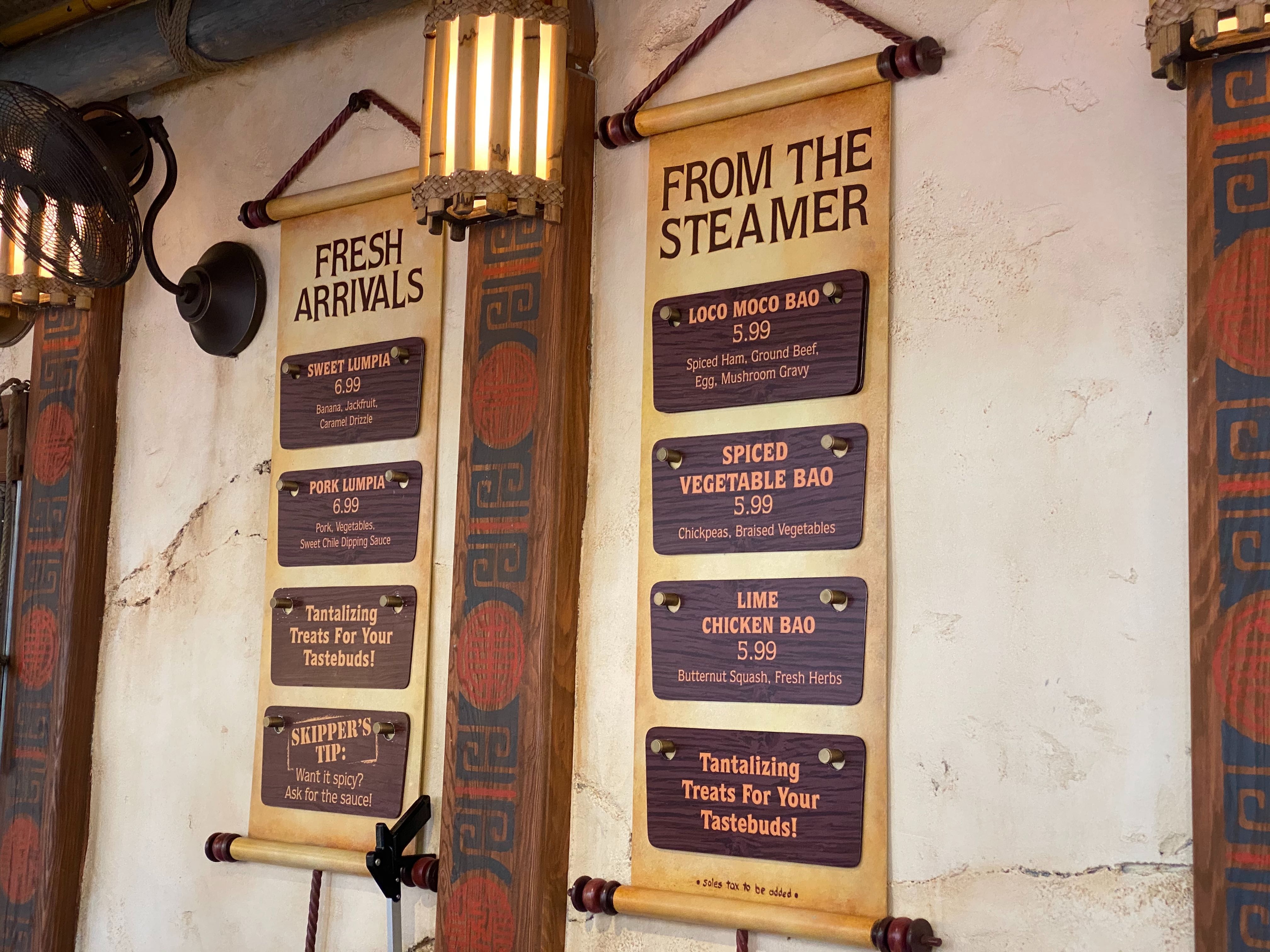 Over by the wall, you’ll see some of the savory menu items, like the new Loco Moco Bao, plus the new Sweet Lumpia under “Fresh Arrivals”. Do note that the Beef Bulgogi Bao has since been removed from the menu. 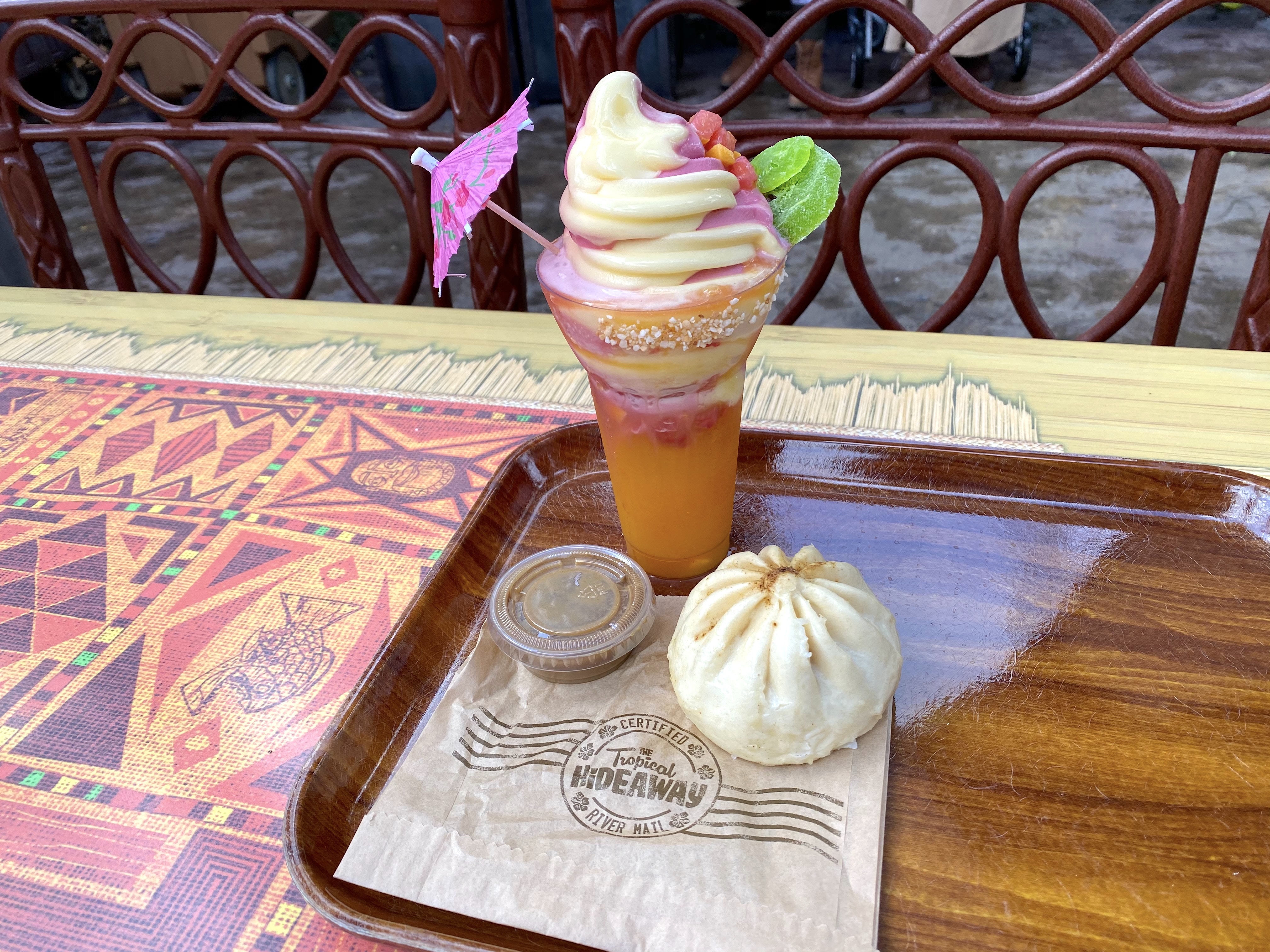 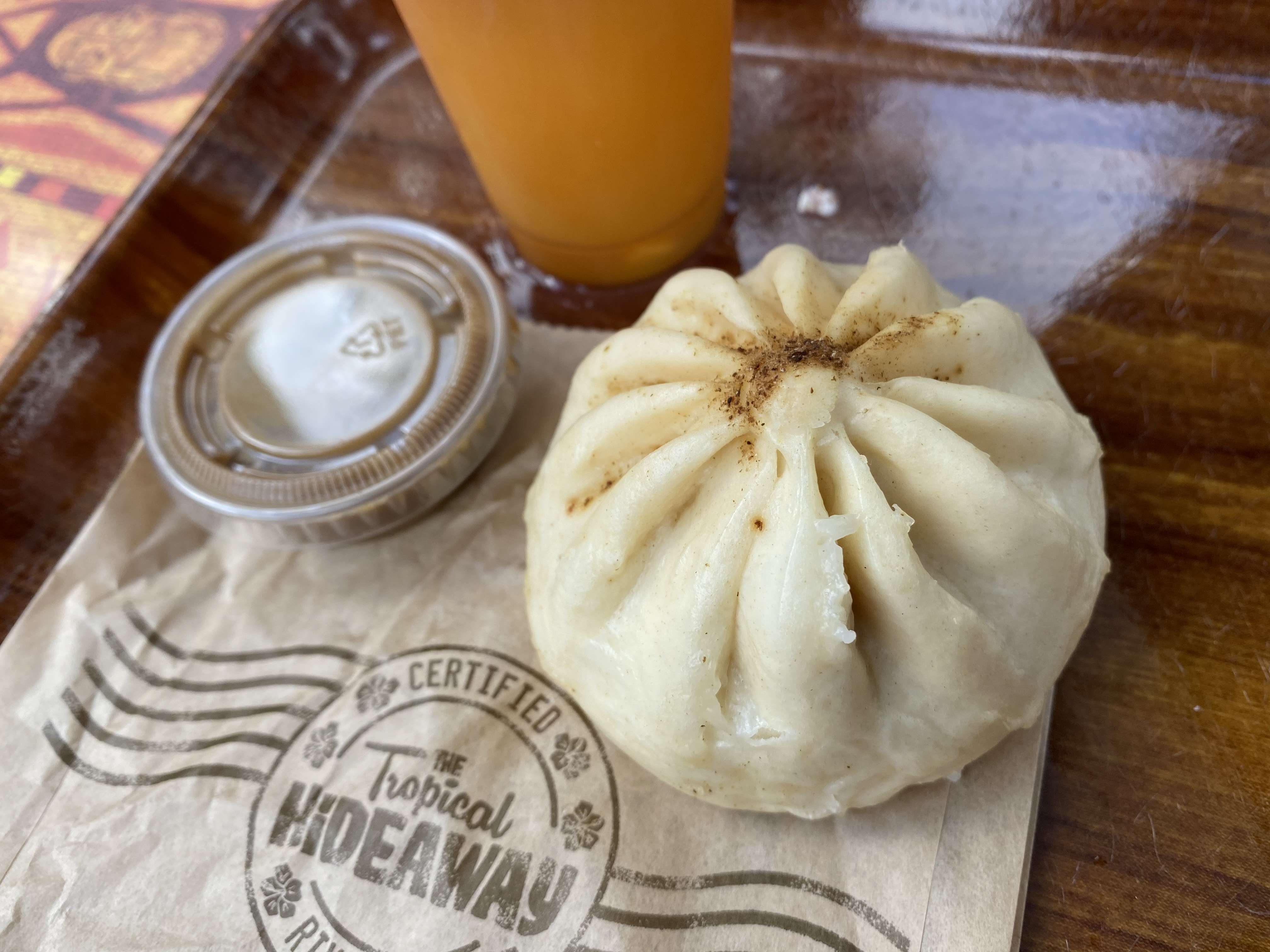 Each order of Loco Moco Bao comes with one steamed bao bun and a little tub of mushroom gravy. 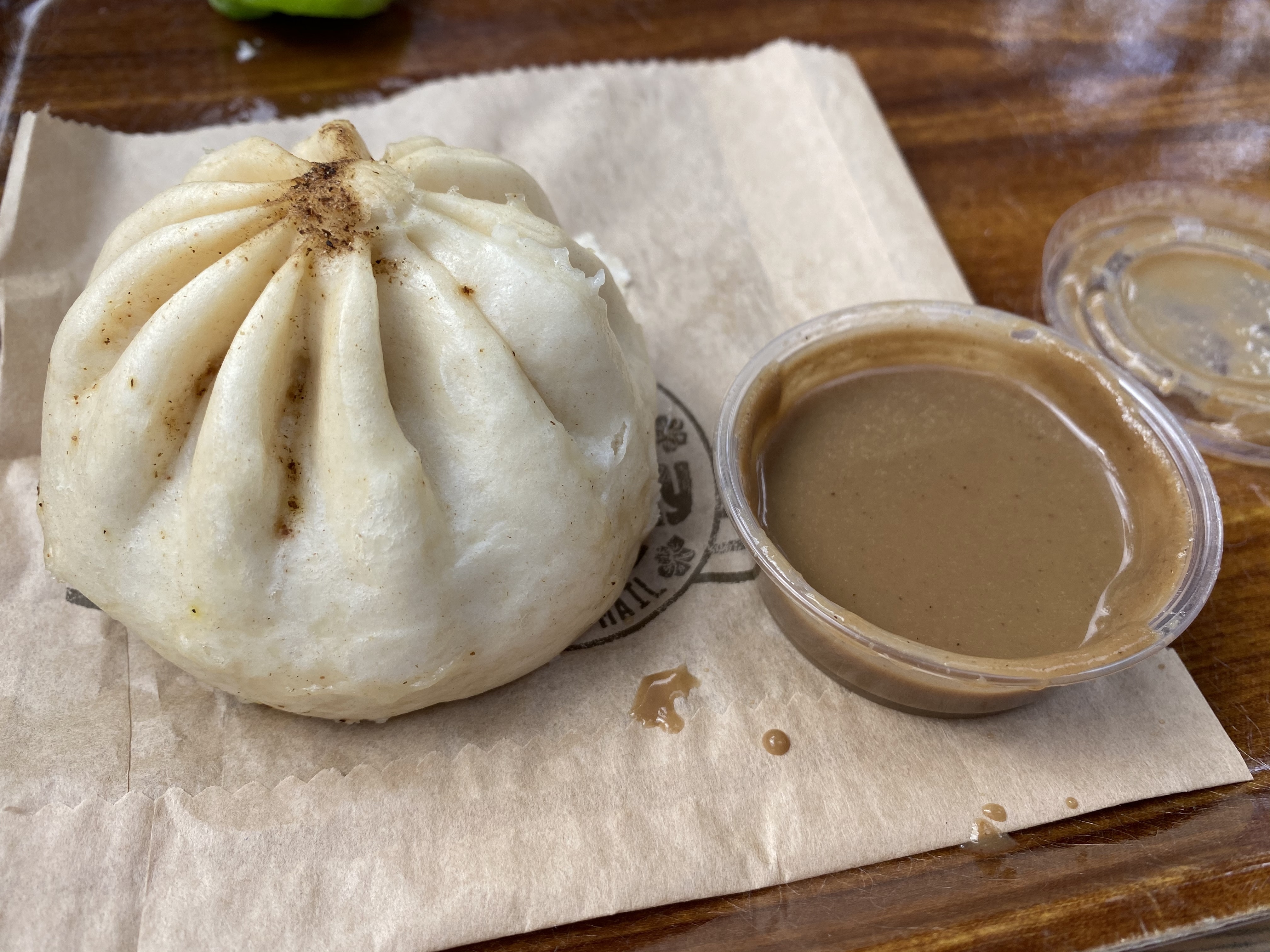 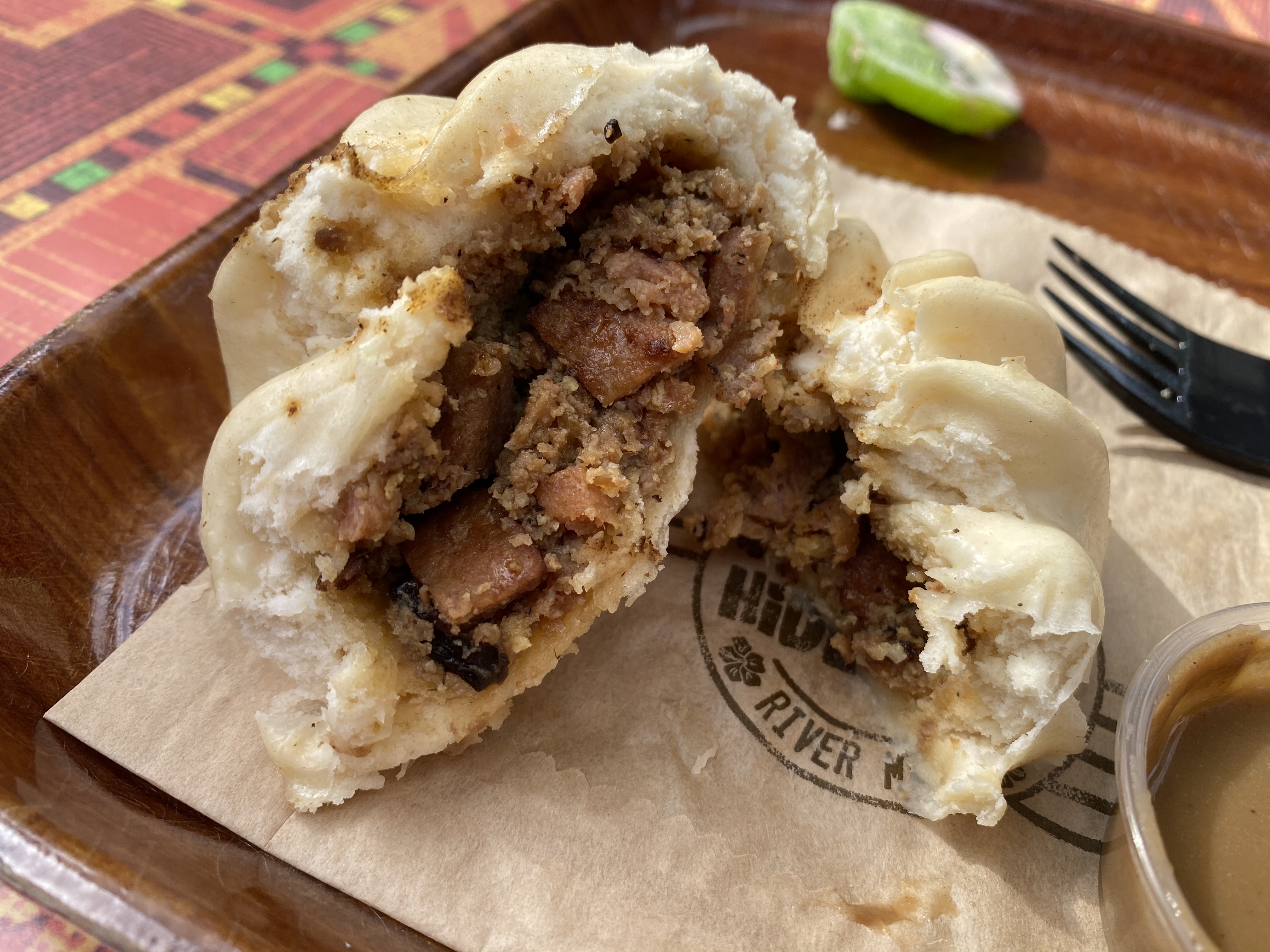 This bao us surprisingly good, if not one of the better baos on offer here. The spiced ham and ground beef are flavorful and go great with the egg bits. The soft bao bun also helps soak in the gravy nicely. 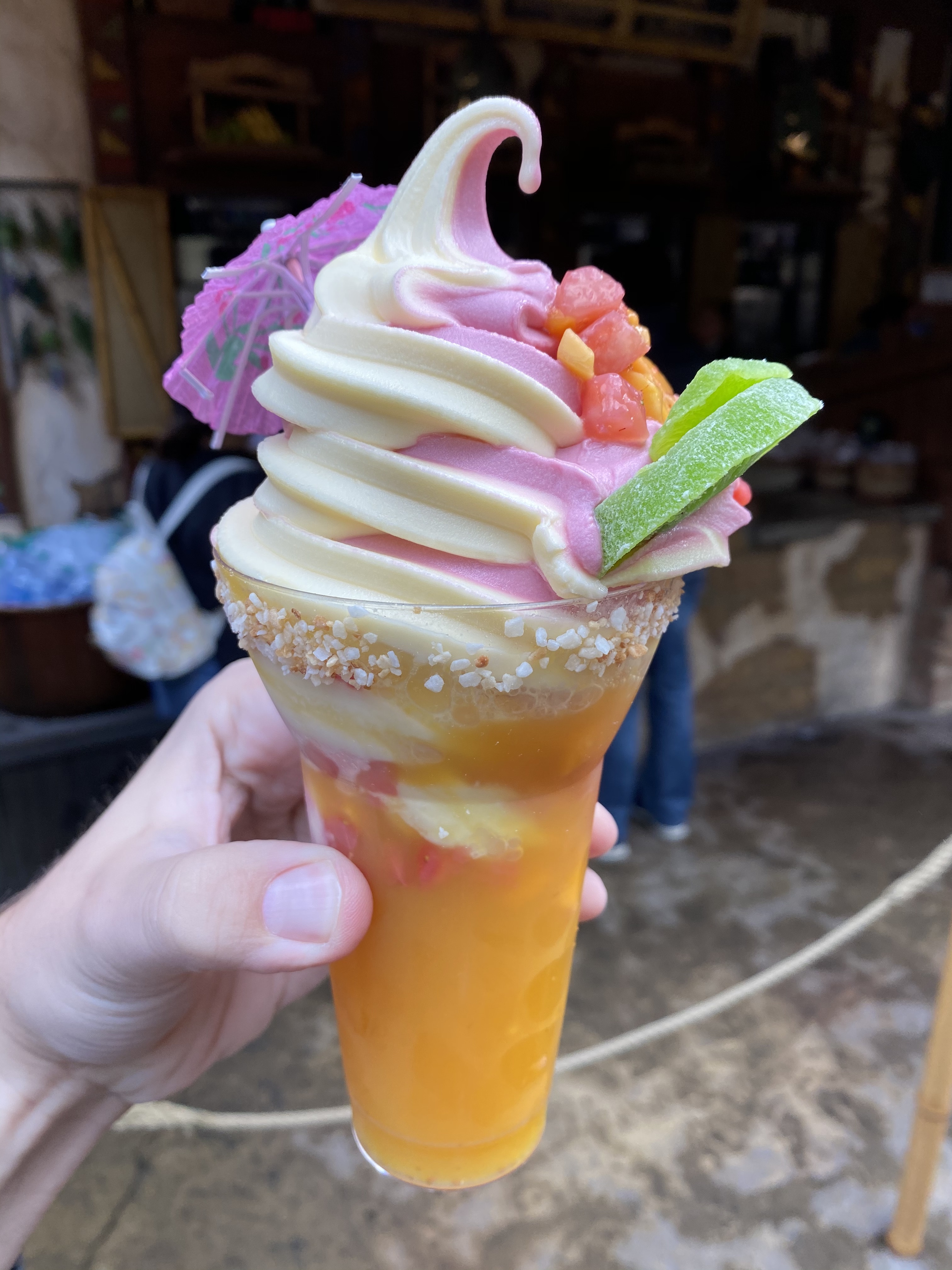 Next up, we have the new Raspberry-Lemon float, which is as delicious as it is beautiful. 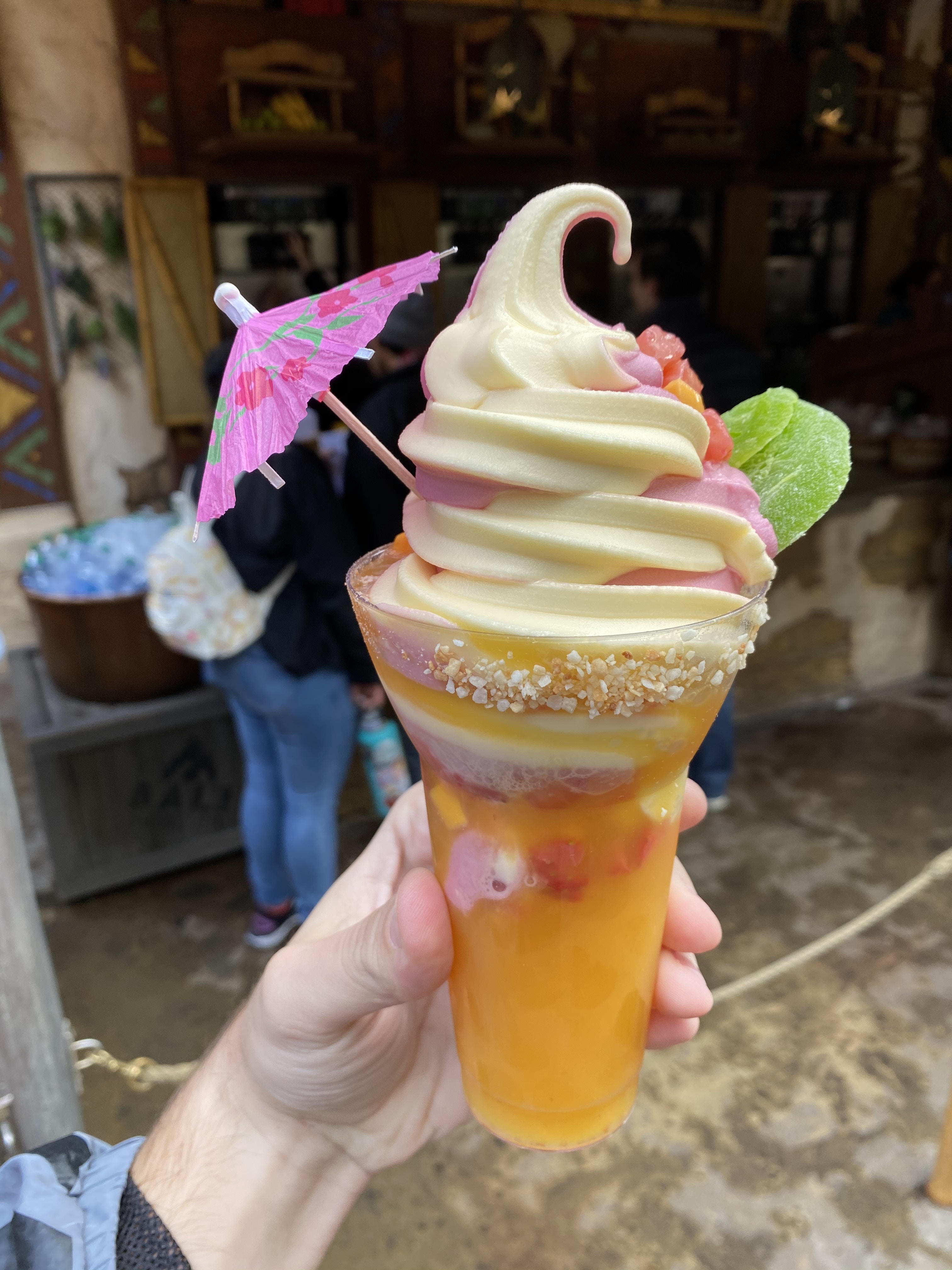 For the float, the lemon Dole Whip is very tart, as you might expect. We don’t think we’d have the lemon alone, but the raspberry works well with it. 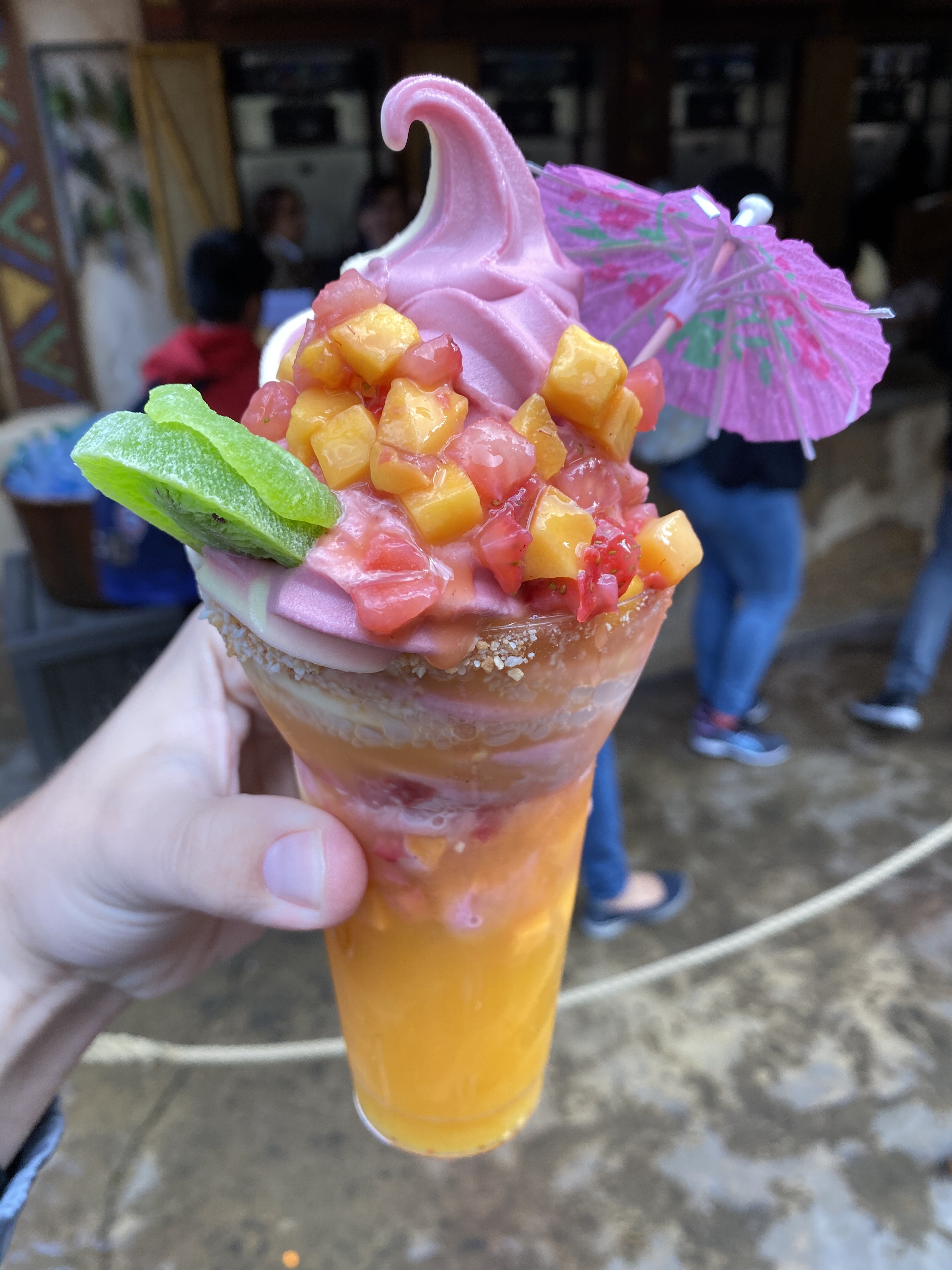 The giant float is topped with a candied kiwi slice, plus diced mangoes and strawberries coated in a sweet syrup, while the rim is coated in toasted coconut bits. 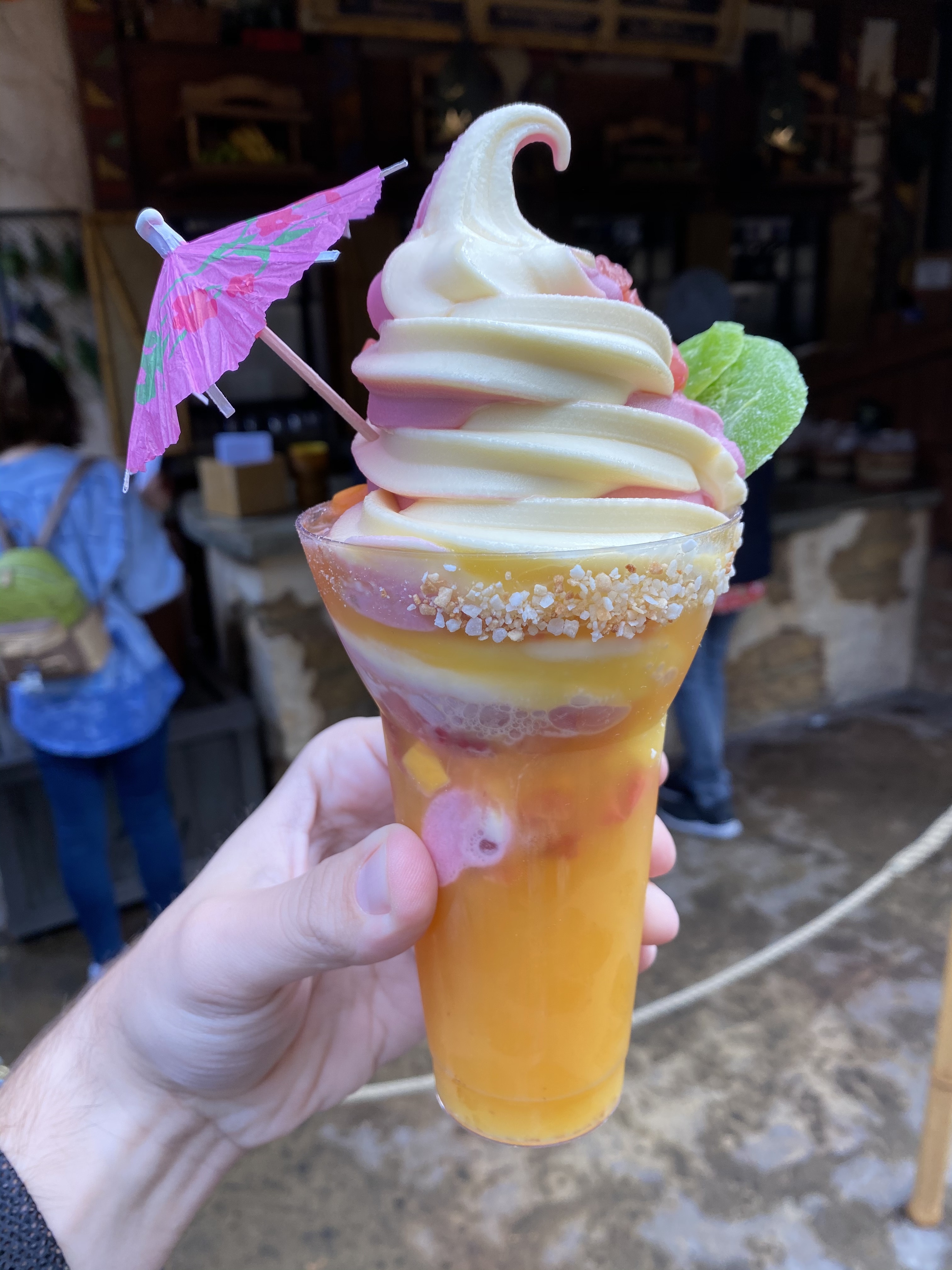 The juice is passion fruit, orange, and guava. Ever fans of POG, we loved this juice, especially sipping it along the coconut rim. The juice really makes this float. We would have gotten the Dole Whip alone, but it really works with the flavors here. While the other juices featured here are much thicker, this is drinkable, and not too acidic.

This float is a real winner. You get the zippiness of raspberries, with the mild, tropical sweetness of guava. True to the name, there are a lot of tropical fruit flavors going on here, but it feels lighter and even more refreshing than the other floats on offer.

So, what are you waiting for? Skip the safari and head on down to The Tropical Hideaway for all of your Adventureland Day libations.