If you love both Disney Princesses and superhero team-ups, the Disney+ Original Film Secret Society of Second-Born Royals might just be your new favorite film.

New photos and details of the film were featured in Entertainment Weekly, and it promises plenty of adventure. The film takes place in the Kingdom of Illyria, where Sam (Peyton Elizabeth Lee, “Andi Mack”) struggles to find her place as her older sister, Princess Eleanor (Ashley Liao), prepares to eventually take the throne. As Lee told Entertainment Weekly‘s Sydney Bucksbaum, “Sam has always felt like not only is she second born, but she is also second best.” She is struggling to find where she can shine and where she belongs. She’s not your typical princess; she loves to skateboard, and doesn’t aspire to be a queen. Oh, and she also has superpowers.

Yes, in this film, first-borns may get the throne, but second-borns get superpowers, and join an elite team of heroes tasked with protecting the world. Think The Princess Diaries meets The Avengers.

As Lee explained, “Sam is going to be a unique addition to the Disney princess family because she doesn’t want to be a princess, she doesn’t want to be royalty. Because of that, it takes her on this journey of figuring out how to make it work for herself that’s going to break that delicate princess mold. When she finds this secret society that feels the same way, they figure out how to create their own legacy and have an impact on their country and the world.”

So when you’ve got a team of second-born royalty, you need a team leader who can understand them. Enter Prof. James Morrow (Skylar Astin, Hamlet 2, “Zoey’s Extraordinary Playlist”), a second-born royal with superpowers of his own. Astin told Bucksbaum, “He is such a fun character and provides a little levity to this otherwise fantasy action movie.” Acting as the team’s version of Professor X, he guides the royals as they learn to harness their abilities and work together. His unique power assists with that, as Astin added: “James has the ability to multiply, so that is very convenient for teaching and combat. I made sure to make certain versions of him more eager, certain ones more serious. In a fight scene there’s one that’s more aggressive. My mother is going to love this movie because there will be 20 of me.”

Joining Sam on her journey are:

With all this young talent, Astin remarked that it was a case of “art imitating life” on the set. “I’ve become a little bit of a mentor for the kids on set. You forget how much experience you have until you work with people so much younger and you’re like, ‘Wow, I guess I’ve been doing this for a while.’ Since like literally when these kids were born!”

Not only was his skill as an actor, but as a musical performer came into play, according to Lee: “Noah [Lomax], who plays my best friend and bandmate in the movie, we had a couple musical scenes together. And [Astin] was so helpful because neither of us played our instruments prior to the film. He was there to lend his musical ear to what we were doing.”

Of course, any good superhero movie needs a villain, and this film is no exception. When Inmate 34 (Greg Bryk, “The Handmaid’s Tale”) escapes one of Illyria’s most secure prisons after ten years, he plots his revenge by taking over the throne… and the world. It’s up to this secret team to save the day. “That’s when we get to see [the royals] make their mark,” as Lee put it.

In addition to this preview of the film, Disney also released the poster below! 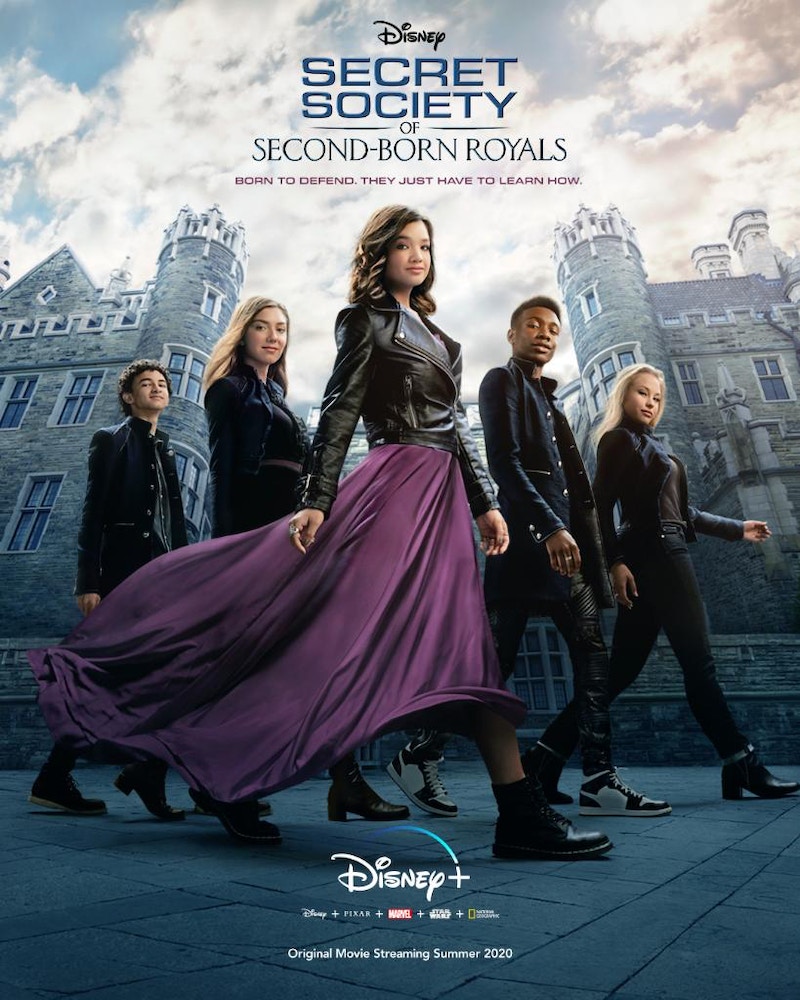 The Secret Society of Second-Born Royals arrives on Disney+ this summer.

Are you excited for this mashup of fairy tale fantasy and superhero action? Let us know in the comments below!

Every New Release Coming to Disney+ in May: “Disney Gallery: The Mandalorian”, “Disneyland Goes to The World’s Fair”, “Prop Culture” and More!

VIDEO: New Trailer Released for “Prop Culture” Showcasing Items from “Pirates of the Caribbean”, “Who Framed Roger Rabbit?”, “Honey, I Shrunk The Kids” and More; Full Series Debuts May 1 on Disney+