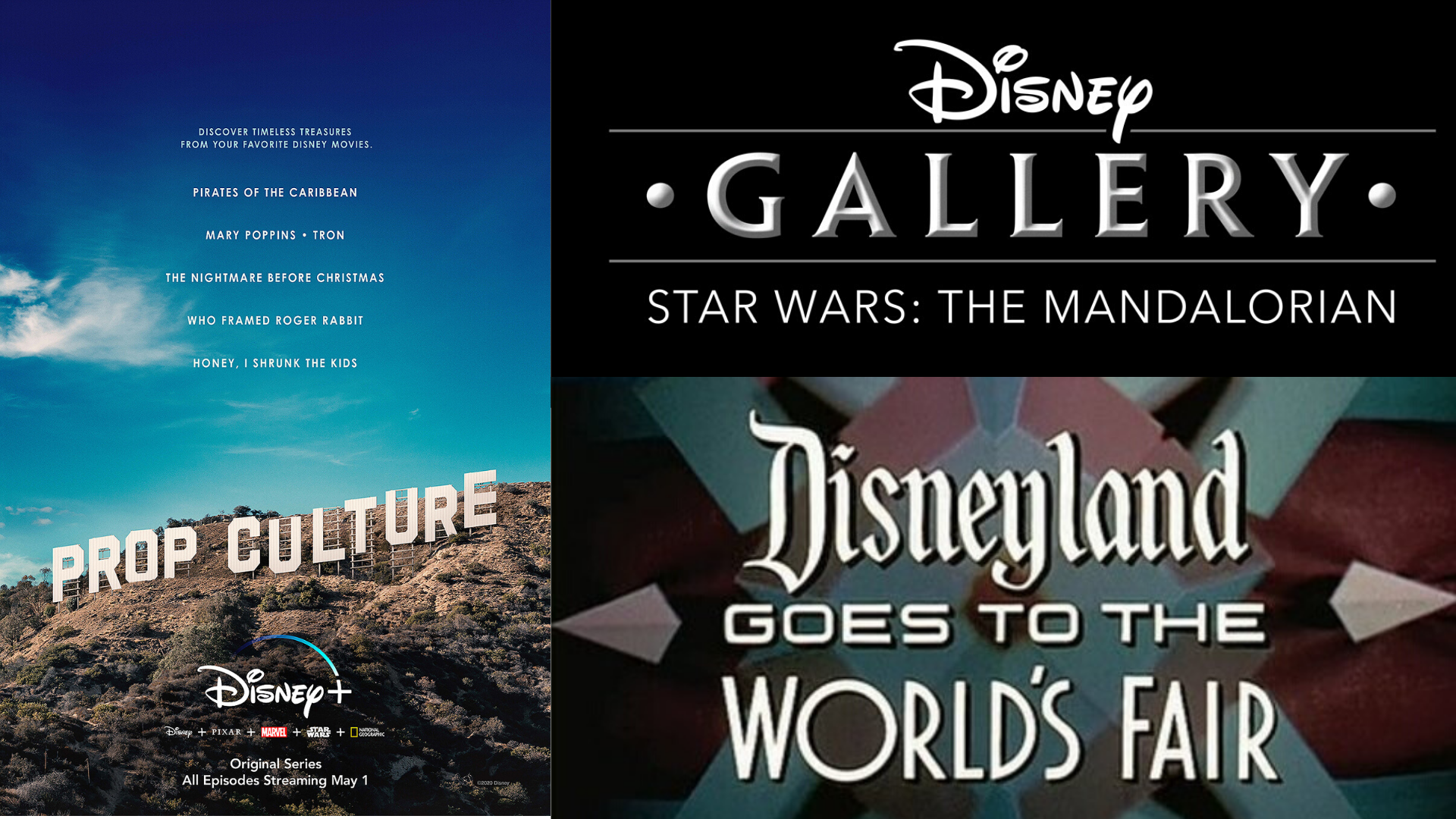 Every New Release Coming to Disney+ in May: “Disney Gallery: The Mandalorian”, “Disneyland Goes to The World’s Fair”, “Prop Culture” and More!

In these dire times, we need Disney+ now more than ever. Because of that, we’re bringing you a full list of all of the new arrivals coming to Disney+ this next month in May! Can’t wait until then? Miss the parks dearly? Check out our first in a six-part series of “Disney Parks Withdrawal Disney+ Movie Playlists” based off of each Disney park, starting with the Magic Kingdom, right here. Of course, there’s still some of April left, so if you’re looking for something to watch o Disney+ now, check out our new release list for April!

Be Our Chef Episode 106 – “Slimy Yet Satisfying”
In this “Lion King” inspired challenge, the Perez family and Platt family are competing to rule the land as they figure out a way to include veggies in a dish that’s fit for the whole family. Just as Simba didn’t want to eat bugs at first, kids sometimes don’t want to eat their vegetables. These families will be tasked with incorporating vegetables into a dish that they all will find satisfying.

Star Wars: The Clone Wars Episode 711 – “Shattered”
After capturing Maul on Mandalore, Ahsoka’s journey to the Jedi Council is disrupted when Order 66 is declared, turning her world upside down.

One Day At Disney Episode 122 – “Robin Roberts: Good Morning America Co-Anchor”
Follow along as GMA Co-Anchor Robin Roberts takes us behind-the-scenes of America’s favorite morning show. From covering breaking world news on a daily basis to chronicling her personal health battle on air in 2012, Robin shows what it takes to be a part of the well-oiled machine that sets the tone for America’s day.

Prop Culture Series Premiere – All 8 Episodes Available
Film historian and prop collector Dan Lanigan reunites iconic Disney movie props with the filmmakers, actors, and crew who created and used them in some of Disney’s most beloved films.

Throughout this journey, Dan will recover lost artifacts, visit private collections, and help restore pieces from the Walt Disney Archives to their original glory. Among the films featured this season are Pirates of the Caribbean: The Curse of the Black Pearl, Mary Poppins, The Muppet Movie, Tron and Who Framed Roger Rabbit?

In the first episode, the filmmakers speak about their individual journeys on the way to the director’s chair and take us inside the filmmaking process of The Mandalorian.

Star Wars: The Clone Wars Series Finale Episode 712 – “Victory and Death”
Ahsoka and Rex must use their wit and skills to survive the turbulent end of the Clone Wars.

Be Our Chef Episode 107-  “Anyone Can Cook”
In round seven of “Be Our Chef”, the Perez and Wells families are tasked with reimagining their own family-inspired “Ratatouille” dish. Both families explore the French Pavilion at Epcot to test out the culinary wonders of the park, while they visit with Remy and Emile for inspiration.

One Day At Disney Episode 123 – “Joe Hernandez: Attractions Host”
Ride along with Attractions Host Joe Hernandez aboard the historic Mark Twain Riverboat and take in the iconic scenery around the Disneyland Resort. From the helm of the wheelhouse, Joe creates a mesmerizing and memorable experience for all guests, young and old, as they embark on one of Disneyland Resort’s favorite floating adventures.

Disney Insider Episode 105 – “Running through Disney, Sorcerer’s Arena, Opening the Archives”
This week on Disney Insider, run Disney goes behind the scenes on how they plan a marathon through The Walt Disney World Resort that puts a smile on every racer’s face. Meet the team behind the new interactive game Disney Sorcerer’s Arena that lets fans play as one of over 100 Disney and Pixar characters. The Walt Disney Archives celebrates its 50th anniversary by putting 400 iconic props, costumes and original artwork on display.

Be Our Chef Episode 108 – “Worth Melting For”
In this round the Merrill family and Platt family are challenged to create a cold delicious dessert inspired by Elsa’s icy powers. The families visit Epcot’s Norway Pavilion to see the pastry display at the Nordic bakery and after a warm hug from Olaf, they head to the kitchen to heat things up. Which family will be left out in the cold?

One Day At Disney Episode 124 “Stephanie Carroll: Ranch Hand”
Fulfilling her lifelong dream of working with horses, Stephanie Carroll has served as a Ranch Hand at Walt Disney World Resort’s Tri-Circle-D Ranch for over 8 years. From caring for the majestic Cinderella Ponies to driving the Main Street Trolley, Stephanie creates magical moments for guests by bringing fantasies to life through her love of horses.

It’s A Dog’s Life with Bill Farmer Series Premiere Episode 101 – “Whale Poop Dogs & Sheep Herding Dogs”
The iconic voice of Goofy and Pluto for more than 30 years, Disney Legend Bill Farmer steps out from behind the microphone to meet his own favorite characters — dogs! Join Bill as he crosses the country meeting dogs doing all kinds of incredible jobs that make our lives better.

In the series premiere, Bill is at sea with a dog who sniffs for whale poop. Then, he meets a dog keeping a sheep ranch moving.

The Big Fib Series Premiere – All 15 Episodes Available
Ever thought you could spot a fib better than a kid? Find out on The Big Fib. A new Disney+game show, hosted by Yvette Nicole Brown and featuring Rhys Darby as her robot sidekick, C.L.I.V.E. In each episode of this comedy game show, a kid starts by playing a warm up round where a silly liar and an authentic expert share fabulous fibs and fun facts.

Starring up and coming comedic talent, this round is played for laughs as well as always having a nugget of real information about the topic be it ice cream, tree climbing or toy design. Next our kid contestant plays the main round where they question an expert who’s paired with a really good liar on the same topic. It’s up to our kid to find the fibber. There are visual clues, fascinating props, a hot seat round of rapid fire questions and various topics, including jellyfish, venom and killer plants.

The show culminates with the expert and liar standing under the Fib Foam machine to await their fate. If our kid chooses correctly, the liar gets foamed. The Big Fib is full of outrageous truths that sound like lies and audacious lies that sound like the truth.

Be Our Chef Episode 109 – “Tiana’s Place”
The Wells and Robbins families leap into action when tasked to conjure up an inspired “Princess and the Frog” dish that could be served at Tiana’s Palace restaurant. Before heading to the kitchen, the families hop on over to Magic Kingdom Park to get cooking advice from Princess Tiana herself. Whose dish will give them a fighting chance at the finale?

One Day At Disney Episode 125 “Ed Fritz: Imagineering Ride Engineer”
Ride Project Engineering Executive Ed Fritz brings new attractions like Avatar Flight of Passage to life through cutting edge immersive and interactive technology. From the initial sketch to the grand opening, Ed is one of the many talented cast members behind Disney’s favorite attractions.

It’s A Dog’s Life with Bill Farmer Episode 102 – “Dogs & Cheetahs & Companion Dogs”
Bill meets a dog whose friend is a Cheetah. Then, he meets a helpful companion dog.

Be Our Chef Episode 110 – “Woody’s Lunchbox”
In round ten of “Be Our Chef” two families are Inspired by the Pixar film Toy Story. These two families will have to bring new life to their favorite childhood snack. Before heading into the kitchen, the families visit Toy Story Land at Disney’s Hollywood Studios to play with Woody and Jessie and to sample some out-of-this-world snacks!. There is only one spot left in the finale, and both teams want to make it in.

One Day At Disney Episode 126 – “Jerome Ranft: Pixar Sculpton”
Pixar sculptor Jerome Ranft spends his days creating characters the old-fashioned way. Through the use of clay, Ranft is responsible for helping imagine Pixar characters in a tangible way that modern technology has yet to replicate. Molding, sculpting and carving all come into play as Jerome employs his elegant – and yet occasionally messy – craft.

Disney Gallery: The Mandalorian Episode 105 – “Practical”
The team celebrates the artistry behind the practical models, effects and animatronic creatures.

It’s a Dog’s Life with Bill Farmer Episode 103 – “Macot Dogs & Guide Dogs for Runners”
Bill is at Texas A&M to meet their mascot. Then, he’s in New York to meet a guide dog for a runner.