Imagineer Joe Rohde has been taking Disney fans on an online digital tour of Animal Kingdom through his Instagram, providing deep backstory on its ethos and culture. He’s discussed the Tree of Life and Africa, and aspects of Asia, but now it’s time for some thrills as Joe takes us to Expedition Everest!

Joe begins by explaining the the architecture of Serka Zong, the village that surrounds the mountain…

“The architecture is generally based on Northern Central Nepal, specifically upper and lower Mustang, along the Kali Gandaki River….Mustang is one of the Westernmost points of the yeti legends and a center of the Bon religion, a kind of sophisticated animist religion which predates Buddhism. Because of this, there’s tons of physical expression of ritual ideas, color, shape, and carved elements which make it easier for us to tell a story.

Joe continues, discussing the history behind the attraction’s story…

“This story contrasts the commercial appeal of a rapid shortcut with the whole idea of pilgrimage and restricted sacred spaces. In Tibetan culture these are real things called begyuls….They are areas considered to be so sacred that nothing human can happen in them….These same places are very often rich with bio diversity.

In certain oral traditions, the yeti is the protector of exactly these places. In our story, Entrepreneurs have revitalized an old tea train and are using it to run a bypass route to get up to the Khumbu region below Everest. Otherwise you’d have to walk and it would take many days. But the train goes through the Forbidden Mountains, a begyul, guarded by the yeti.

One of the design goals here was to make the village and the mountain visually rhyme with each other, so that the train seems like an intervention. The buildings are deliberately crusty, ragged, irregular, so it is clear they are made from the same earth as the mountain.” 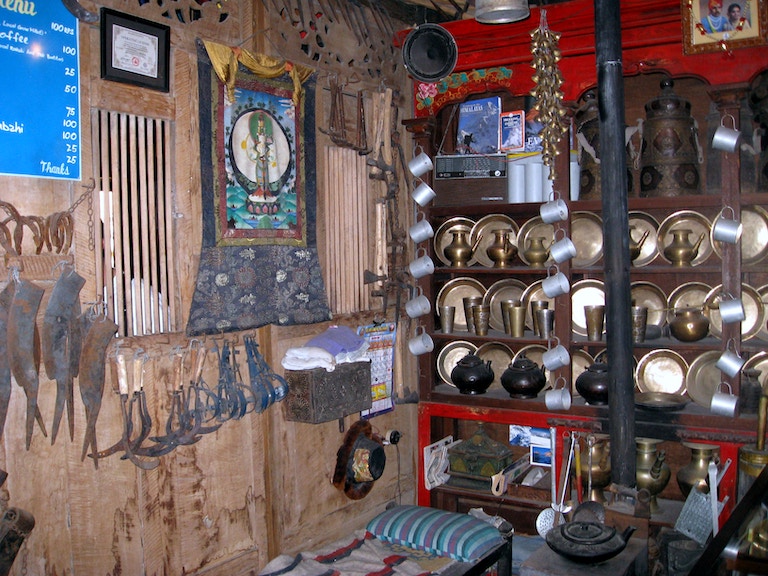 It’s difficult to tell much of a story on a ride. It must be very simple and nonverbal, completely comprehensible as pure experience. That puts a burden on the queue experience to set the scene. Plus we also want to frame the story in our broader set of conservation stories….

The careful observer will see that proprietor Bob is Australian and Norbu is a local. Sociology. Also, Bob runs marketing in the front (left)office…and Norbu actually runs the treks. Sociology. It is clear that they are blissfully ignoring any warnings about a yeti. Commerce. One of my favorite moments in the whole park is Tashi’s Trek and Tongba shop, with its polished metal plates and potbelly stove. Culture. How many people notice that Tashi sleeps here?”

“The compression of this very commercial enterprise with the shrines is a bit artificial but it helps make a point of the contrast and conflict between the three agendas. Conservation, Culture, and Commerce.

So right before you board we have the yeti museum, also set up by a local scientist, which restates everything with labels and written text, so that in case you missed any points they are all restated again, with the added emphasis on the possibility of a yeti….The (queue) must say these things in order for the ride to work. There is a yeti, he protects the mountain, it’s a haven of biological richness, some people think you shouldn’t go there, you are going.”

And now it’s onto the ride itself. Up the mountain we go!

“A roller coaster is an investment in the physics of potential and kinetic energy. Basically, one buys gravitational potential energy by going up and spends kinetic energy going down. Logically, this means that peak spending of energy happens early in the sequence and by the end of the ride, the energy is almost entirely spent. Without the additional influence of theme and story that is what one would do… That is logical.

However this is a story with the theme. So the pattern of energy utilization is very strange for a coaster. We leave the station and kind of cruise through a landscape for a while, only beginning our climb after that. At the top of the climb, we do not drop…instead we dip a little bit and rise again to where we stop. By now half of the ride is over. We have spent very little energy at all. We have a huge energy fund for the second half of the ride.”

“This is the moment where, spoiler, we begin to drop backwards….When we built this ride there was no such thing as a coaster that went backwards onto a different set of tracks….No one in the industry had felt the need to build a track switch that could handle a fast-moving loaded train. Because that was a story driven need not a physics driven need.

All of that means that the fastest most exciting part of this ride is the last part of the ride and instead of coming into the station exhausted, slow, at the tail end of an energy investment, the train comes in fast and hot. Which means people leave with the last impression that is very exciting. Now, we all know there is a yeti in there somewhere… But everything I’m talking about would be obvious to you if you could not see. It is entirely a kinesthetic analysis.”

Next
Every New Release Coming to Disney+ in May: “Disney Gallery: The Mandalorian”, “Disneyland Goes to The World’s Fair”, “Prop Culture” and More!