A Digital Tour Through Disney’s Animal Kingdom with Imagineer Joe Rohde – Part 1: The Tree of Life

Have you ever wanted a personal tour of a park with an Imagineer? Well, we’ve got the next best thing! If you’re a fan of Disney’s Animal Kingdom, then you know the mastermind behind much of its ethos was Imagineer Joe Rohde, and he’s recently taken to Instagram (as usual) to share his detailed thoughts on many aspects of the park you may have overlooked. We’ve compiled some of those amazing details here for your easy reading pleasure with several more tours to come! Be sure to check out his Instagram for the full posts.

To start, Joe takes us to the front of the park, known as Oasis Gardens…

“The first thing you notice is not a presence, but an absence. What is not there is a human-based, urban, architectural environment. Instead there is a forest with two paths. Not to put too fine a point on the Robert Frostiness of this, but of course, we want you to take the path less traveled by, because that will make all the difference. Having more than one path is a simple metaphor for adventure… Even if nothing happens on the path you take… There’s always the mystery of that other path.

You cannot believe the number of versions of a park entry sequence we went through….[e]verything from empty zoo cages with their doors standing open, to a kind of 1960s organic hobbitish Village Trail. But this forest does the job. You are in a place about nature, and the priorities of nature, but you, being human, are also there so it must be about you too.”

Joe then takes us to the big centerpiece of the park – The Tree of Life!

“Because the park is dedicated to the themes of animals and their relationships to humans…we needed a non-architectural icon…something “natural.” Since nature is everywhere anyway, we also need to signify that this place is exceptional..in some way “magical.” Thus..a strange tree.

A tree whose body disappears under patient observation to become nothing but animals. A metaphor for the rewards nature can provide to the careful observer. But since we all know it has been made..it is a work of art…it also signifies the intent to communicate..to tell a story. In fact, the Tree promises two things. 1. This place is a story place about animals. 2.This place is a designed place full of virtuoso accomplishments.”

Joe also comments on the live animals you find out in front of the Tree of Life and their place in the overall story of the park.

“When we originally chose animals just around the tree, we chose them for their physical diversity, as demonstrations of the vast differences in shape as animals adapt to their various ecosystems. Kangaroos, porcupines, flamingos, macaws. Each of these animals has strikingly unique adaptations.

These are observations which can be made but are not required. Because this is not an educational facility per se, we want people to pursue ideas at their own pace. As they might do in nature.”

Joe finishes up this area, by discussing a place you may have always overlooked. 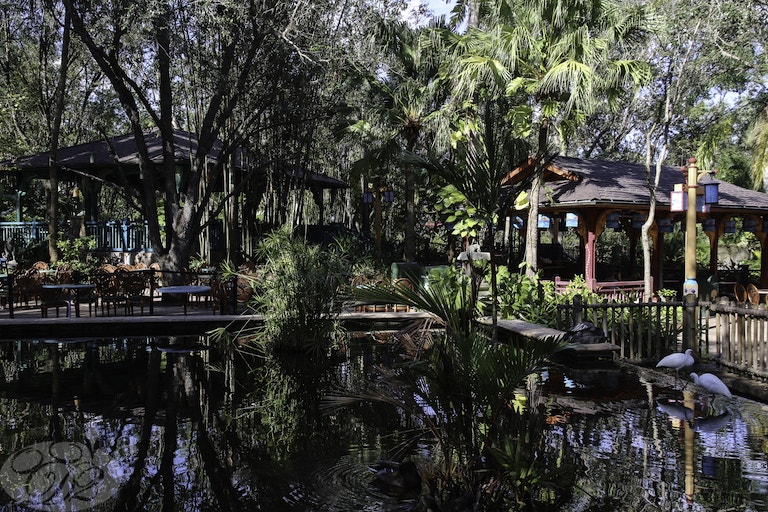 “We cannot leave the middle of the park without reflecting on one of my favorite places, the dining gardens of Flame Tree Barbecue. These have a very weird origin. Early in design of the park there was a shuffle of programming. The Tree originally had a restaurant under it with a view of the river. The Flame Tree location was an amphitheater. We decided to put a bigger show under the Tree so we abandoned the amphitheater and moved the restaurant to the amphitheater location. Because this happened after our landscape design was pretty well defined, we had to fit the restaurant into the amphitheater shape. That could have been a design problem, but it ended up creating a really wonderful space.

It’s loosely inspired by some of the places we visited in Bali – little pavilions surrounding a reflecting pond….The architectural ornamentation is inspired by colorful folk art mainly Oaxacan carvings, Peruvian Moche ceramics, and American folk art carvings…not Balinese at all. But the ensemble works somehow to make a very restful meditative space. If you haven’t hung out there it’s worth a visit.”

Again, make sure to check out Joe’s Instagram for his own pictures and many more adventurous stories.