Bob Chapek Talks About The Future of Phased Disney Parks Reopenings, Films, and His Role as CEO on Interview with CNBC; Emphasizes Guests Must Wear Masks and “Do Their Part” For U.S. Reopenings

Today, Disney CEO Bob Chapek gave an exclusive interview to CNBC just hours after Shanghai Disneyland closed after its first historic day back in operation in the aftermath of the COVID-19 pandemic. The market generally looks towards Disney as the proxy on how to carry out phased reopenings on a large scale, so not only are Disney Parks fans following reopening guidelines, but the general public is interested in just how Disney is going to manage the reopening. 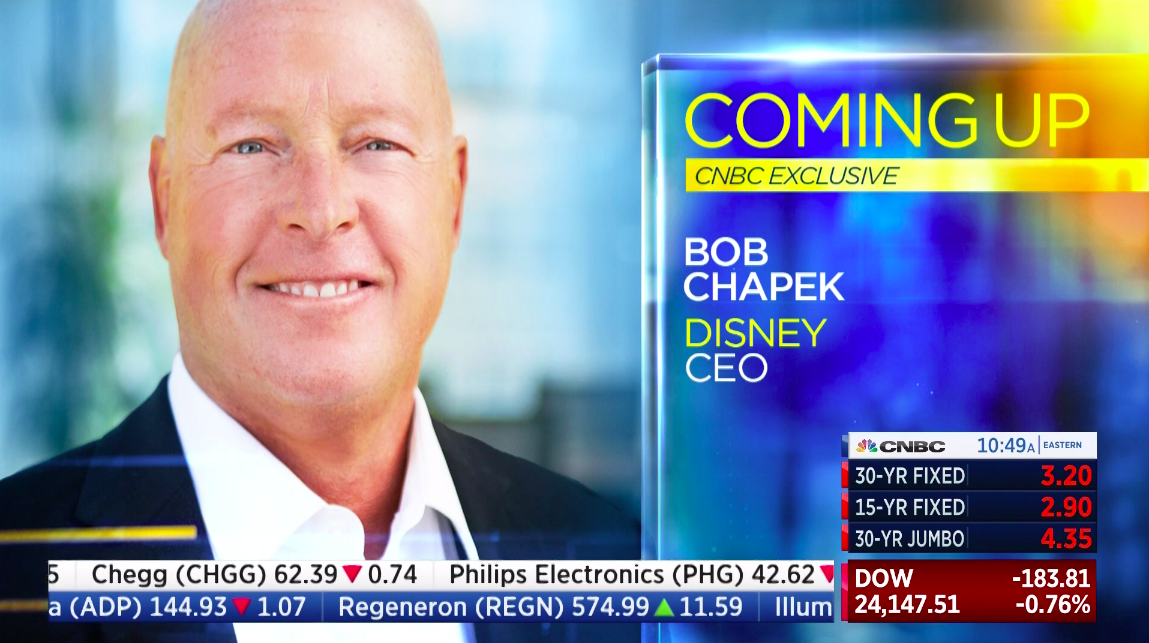 Currently, “stay-at-home” stocks for companies that specialize in video conferencing, broadband, and online gaming (like Zoom and Blizzard) are on the up and up, with Disney still struggling to keep their parks, cruise line, and film studio afloat during the extended, unprecedented closures. Not surprisingly, Disney+ has been the company’s saving grace, with the streaming service surpassing 54.5 million subscribers this past week.

Earlier today, former Disney Imagineer Bill Coan, now CEO of ITEC Entertainment also spoke to CNBC regarding the Disney model for reopenings. Given that Disney Parks are essentially small cities in and of themselves, adapting things such as public transit, restaurants, and entertainment to new health and safety guidelines will take some time as they face the same challenges as the rest of the world does in reopening. Coan stressed the importance of cleanliness, or at least “the perception of cleanliness”, as the company’s reputation precedes them, and guests anticipate a high level of safety within Disney Parks. Coan believes Disney’s reopening will still rely on state and federal regulations, but once they are able to reopen, business will be back up very quickly. 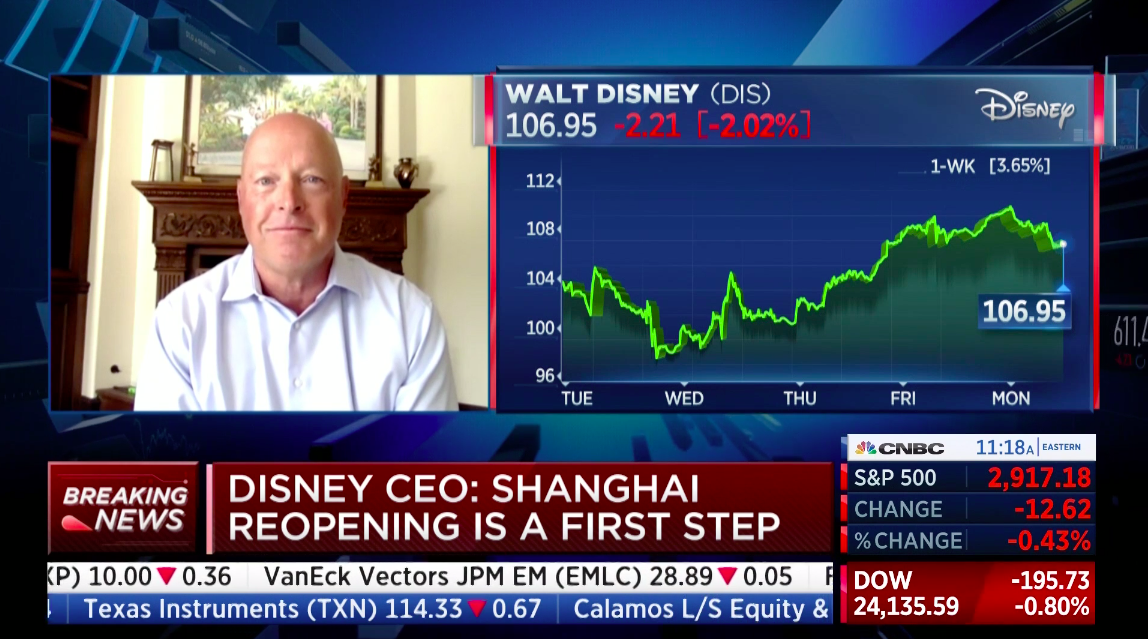 Chapek referred to Shanghai as a short-book market, where typically tickets are sold on a week-by-week basis. The phased reopening was controlled through the sale of “significantly constrained” ticket quantities. Nearly all advance reservations have been booked, with the exception of a few weekday slots, which speaks to the love that consumers have for the brand across the world. Chapek stressed the fact that fans can’t wait for the parks to reopen, as many look to it as the return to “some semblance” of normal. While the company is looking to reopen the parks as soon as possible, they also need to ensure that they do so in a responsible way. The company is excited to welcome back guests and Cast Members, and they’re encouraged by what they’ve seen in Shanghai so far, as “a first step.”

In terms of furthering the current phased reopening, Chapek remarked that the company needs to be “very conservative, very prudent” in moving forward. At Shanghai Disneyland, the plan is to increase the amount of guests by 5,000 each week, with the government’s permission. 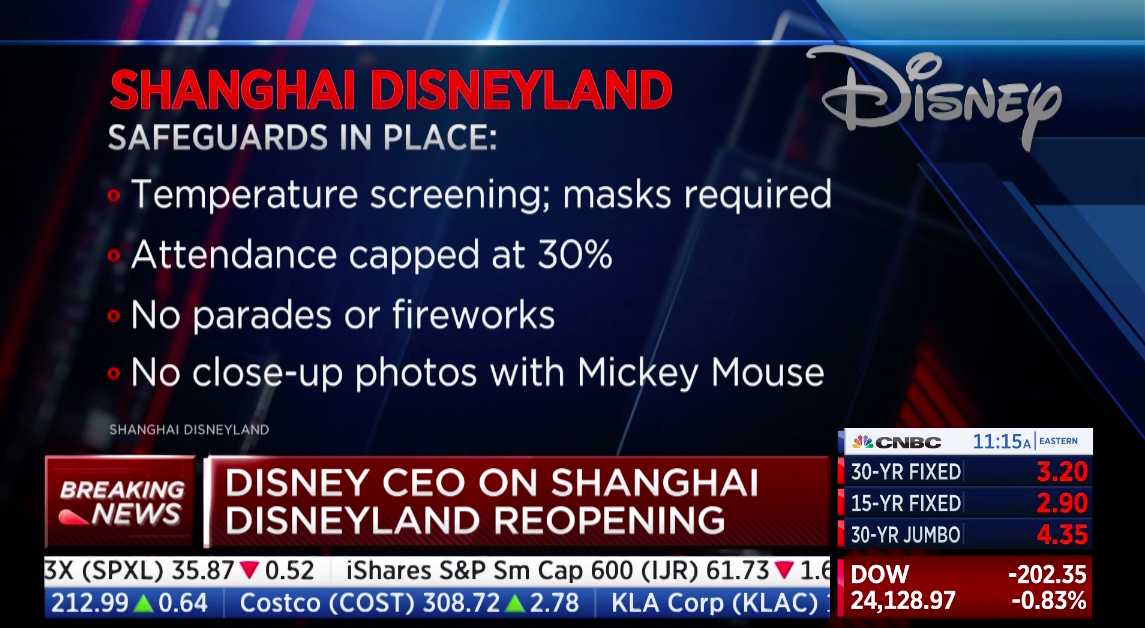 “If guests continue to behave in the way that they have, we may be able to approach that… We’re all playing our part in this ecosystem of safety, if you will, and we’re going to do our part and we need our guests need to do their part, too.”

When asked about a potential July reopening date, Chapek declined to comment on any specific dates, as he stated that it will depend on state and  local government regulations, plus hospital capacity at medical centers near the Disney Parks. With Disney Springs reopening on May 20, they’re looking to test protocols much like they did with Disneytown in Shanghai Disney Resort.

CNBC asked the key components needed to get the parks to reopen. To that, Chapek responded that social distancing, as well as masks, will be required for all Cast Members and guests. While masks are a cultural norm across parks in Asia, he also recognized that guests across U.S. parks will have to adapt to wearing masks in hot, humid environments (like Walt Disney World.) 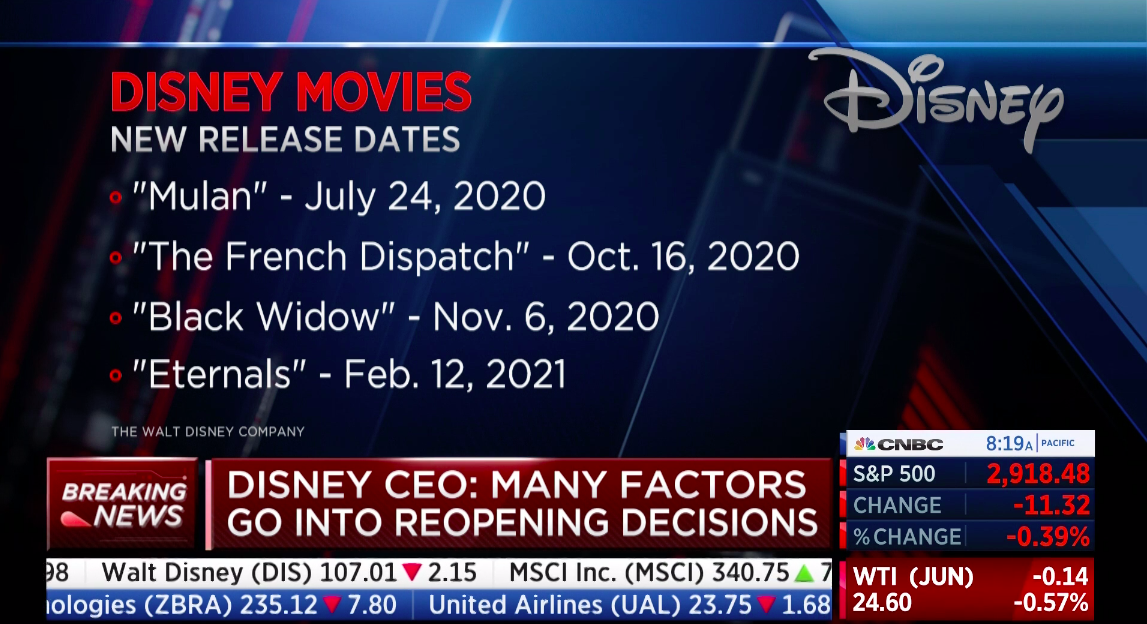 As the conversation shifted to movies, Chapek stated that limited capacity across movie theaters moving forward will mainly be an issue on Friday evenings and weekends, and can be something that is managed by the exhibitors the company partners with.

“At Disney, we’re a bunch of optimists. We have to manage people’s anxieties with people’s demands. If you do it in a relatively smart, responsible way, it’s possible.”

Big, tentpole films will continue to go to theaters, but they’ll continue to look at Disney+ for releases on a case-by-case basis in order to remain flexible with theatrical releases. 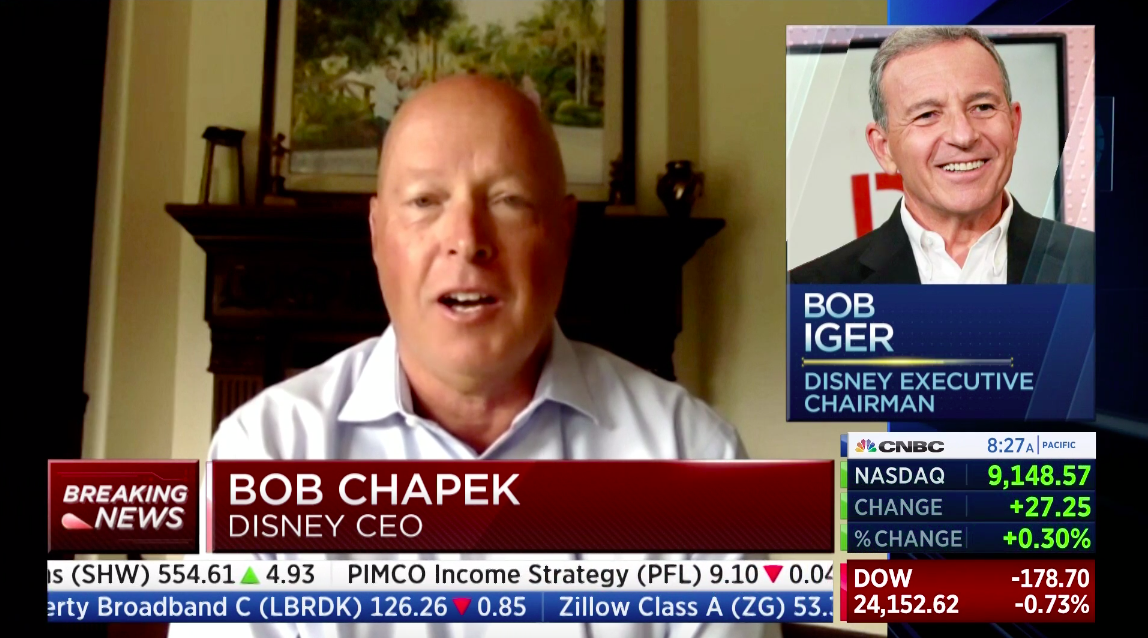 Finally, Chapek was asked about his ongoing tenure as CEO, where former CEO Bob Iger has had to notably step in at various stages throughout the health crisis:

“This is an unprecedented situation… I knew there would be disruption in my tenure as CEO. What I didn’t realize––it would happen that fast or that profoundly.”

Chapek mentioned that the company is wholeheartedly embracing a team approach to figure out what’s best for investors, guests, and Cast Members alike. In closing the series of questions regarding parks, films, and his tenure as CEO, Chapek said, “Disney will be back stronger than ever.”

You can watch the full interview on CNBC here.

Next
TODAY on WDWNT LIVE: Tom and Jason’s 2019 Shanghai Disneyland Trip Report at 11:00 AM, Plus Favorite Disney Character Interactions on Cosmic Reid Live at 9:00 PM!