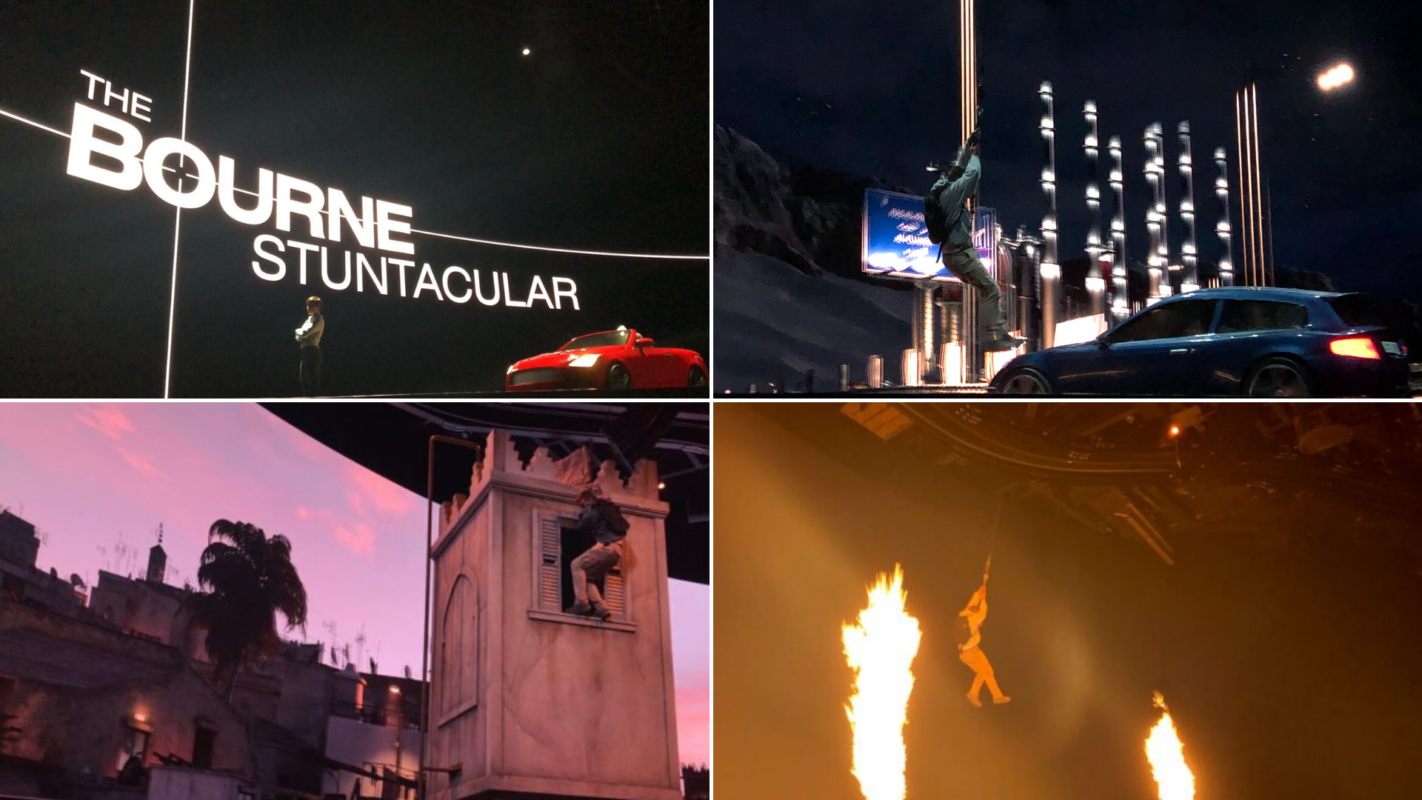 Before we step inside, let’s review what we know about the attraction so far, as not many details about the new show have been released to the public. The show will be based on the Bourne series and follow protagonist Jason Bourne, an ex-spy, as he’s perused by “sinister characters” across three continents. The show will feature lots of chase scenes, fistfights, and more while utilizing live actors, props and a giant LED screen.

Today, the soft opening was taking place from 3 p.m to 4 p.m. The next show time above the attraction entrance still listed “closed” and the doors still read “coming soon.”

The warning sign posted outside the attraction warned this could be intense for children and parental discretion was advised. Those who get motion sickness, or are sensitive to fog effects or strobe lighting are advised to not experience this attraction, and for the hearing impaired, Team Members have an assistive listening device.

We weren’t the only ones who showed up for the soft opening- by the time the attraction was almost ready to start letting guests in, there was a huge line forming down the street.

Once inside the queue area, we are greeted with a logo for the The Bourne Stuntacular which is surrounded by the names of different programs from the fims: Iron Hand, Blackbriar and Treadstone, which Jason Bourne was a member of.

Walking down the hallways, we enter into a large queue area.

On the monitors above, footage plays. On the walls, you’ll find photographs from the various Bourne movies of Jason Bourne himself and various characters from the films.

Along the queue you’ll find prop replicas, like this motorcycle from the Bourne Ultimatum.

Or this replica of the Bourne Mini from the Bourne Identity. A nice effect is created where they project Jason Bourne’s passport into the window.

We then enter into a scanning chamber.

Scanning complete! After exiting the scanning chamber, you’re taken into a large bay where a Team Member directs you where to stand.

They do note with a sign that the attraction is still in technical rehearsals.

These doors will lead us into the theatre.

There is a short pre-show before the show starts.

Once inside, Team Members did a great job directing where we should sit and left two open chairs between each party. They are also thoroughly cleaning the theatre after each showing.

The screen that faces the audience bears the same emblem from the hallway with the different CIA projects from the Bourne universe. The metal plates then lift away, and the show begins.

The show begins with an amazing fight sequence where it’s actually difficult to tell who is a real person and who is on screen, Universal did an amazing job blending the two together.

In this group of show scenes we were incredibly impressed that it’s actually difficult to tell who is a real person and who is on screen. Universal did an amazing job blending the two together. In several scenes, the images on the background video screen would move while the actual show scenes on stage would move for characters to interact with. This would lead to really dynamic fights with screen-based actors and real-life actors. There were also props for characters to swing on and explosions, and who doesn’t love a good explosion?

Outside of this house, people show up and begin to shoot at it.

All of the fight scenes are handled very well- at one point multiple people are fighting on a balcony, this leads to a projection of a person showing up in the water and ends with a live-actor being thrown off of the balcony.

The next set of show scenes take place with Jason Bourne hanging above us in a helicopter, and the theatre even produced a wind effect, as well as fire effects.

The story ends with our hero landing on the blue car as the villain drives up in a red car. A battle ensues, and the villain thinks he’s won… but Bourne gets away!

As people who haven’t really watched the Bourne series, we were still captivated and entertained by this attraction. All of the effects, props, and screens blended together seamlessly for an action-packed show. This is a must-see attraction while visiting Universal Studios Florida and makes a wonderful addition to the park. Universal did a fabulous job and we’re looking forward to seeing The Bourne Stuntacular when it officially opens!

What did you think of the show? Are you excited to finally watch it for yourself? Let us know in the comments!