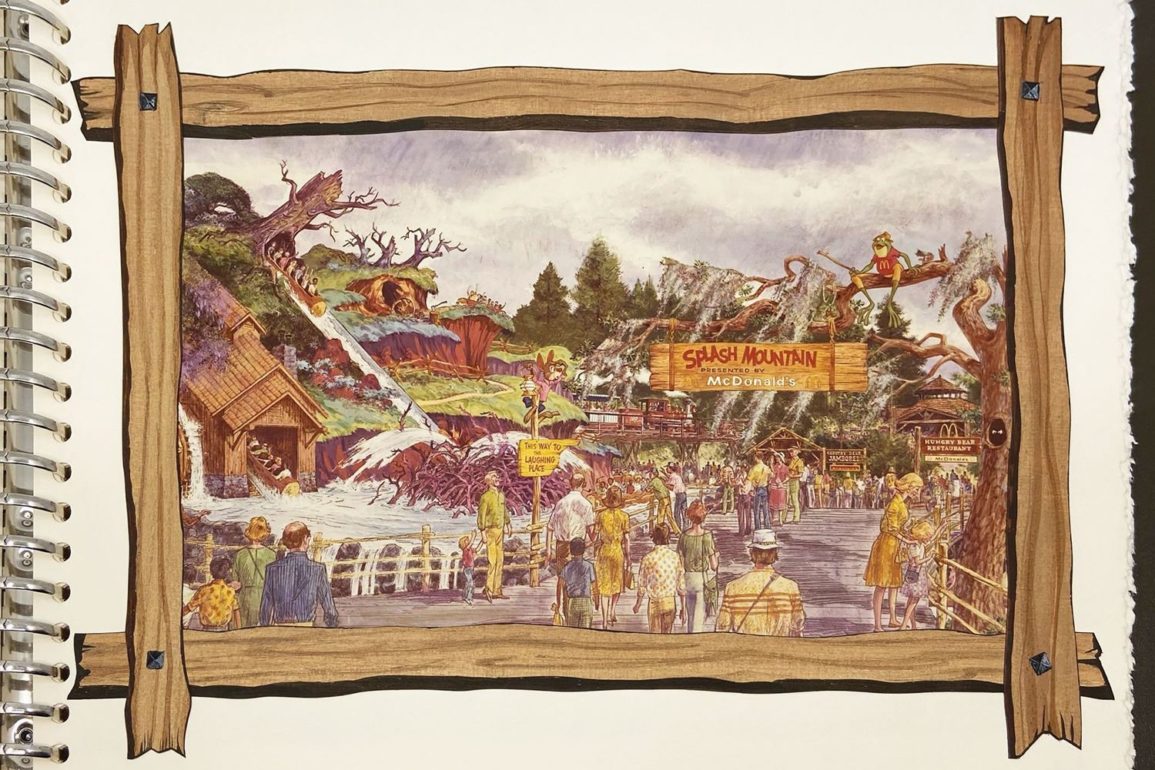 An auction at Van Eaton Galleries set for August 15 and 16 features over 1,000 artifacts from Disneyland and Walt Disney World history. And while rare props, signage, and other park-used items are treasured by many Disney collectors, an even more elusive item is up for bid. A Splash Mountain Pitch Book developed for McDonald’s executive Pete Nelson shows a proposed sponsorship between the Golden Arches and the Laughing Place.

In this pitch, the attraction would be sponsored by McDonald’s in a big way, with the McDonald’s name writ large across the entrance. The proposition includes several pieces of concept art detailing early looks at Chickapin Hill – the tall spire of which is called “Brer Rabbit’s Splash Mountain” in the pitch book and subsequently in the final version of the ride. In addition to the sponsorship of the ride and a small kids play area near the ride’s entrance, McDonald’s would be found at the Hungry Bear Restaurant at Disneyland. In Walt Disney World, the Pecos Bill Tall Tale Inn and Cafe would have been renamed to the Hungry Bear Restaurant to match the Disneyland location and serve McDonald’s hamburgers. Take a look at the gallery below to see more of what could have been.

More can be found in the description from the official Van Eaton Galleries listing.

“Using photographic reproductions of early concept art as well as McDonald’s themed concept pieces,” the description reads, “the pitch explains the benefits of sponsorship at both Disneyland and Walt Disney World, as well as an overview of the attraction. Several pages include hand-painted and custom elements that enhance the printed elements.”

Brer Frog was set to be the spokescritter of the attraction and revamped land as a mascot for McDonald’s.

The art style on Chickapin Hill more closely resembles the “Song of the South” film animation in this early draft. And McDonald’s is featured in a big way, with the fast food giant’s name being larger than the name of the ride on the entrance.

Brer Frog would have been seen at the entrance to Critter Country with yet more McDonald’s signage. To the back of the land is the Hungry Bear Restaurant with the famous Golden Arches.

Concept art storyboards were also included in the pitch to outline the plot and visuals of the ride.

This item is set to go to auction on August 15 online and live in person (barring further COVID-19 restrictions or cancellations). The early bid stands at an opening of $600, but it is expected to fetch between $1,000 and $2,000.

This is just one of over 1,000 items up for bid at Van Eaton’s Disneyland: The First 65 Years auction being held in Sherman Oaks. To check out the full list of items available for bid, view them in the catalog here.

Or take a look at a previous Disney auction from Van Eaton Galleries: