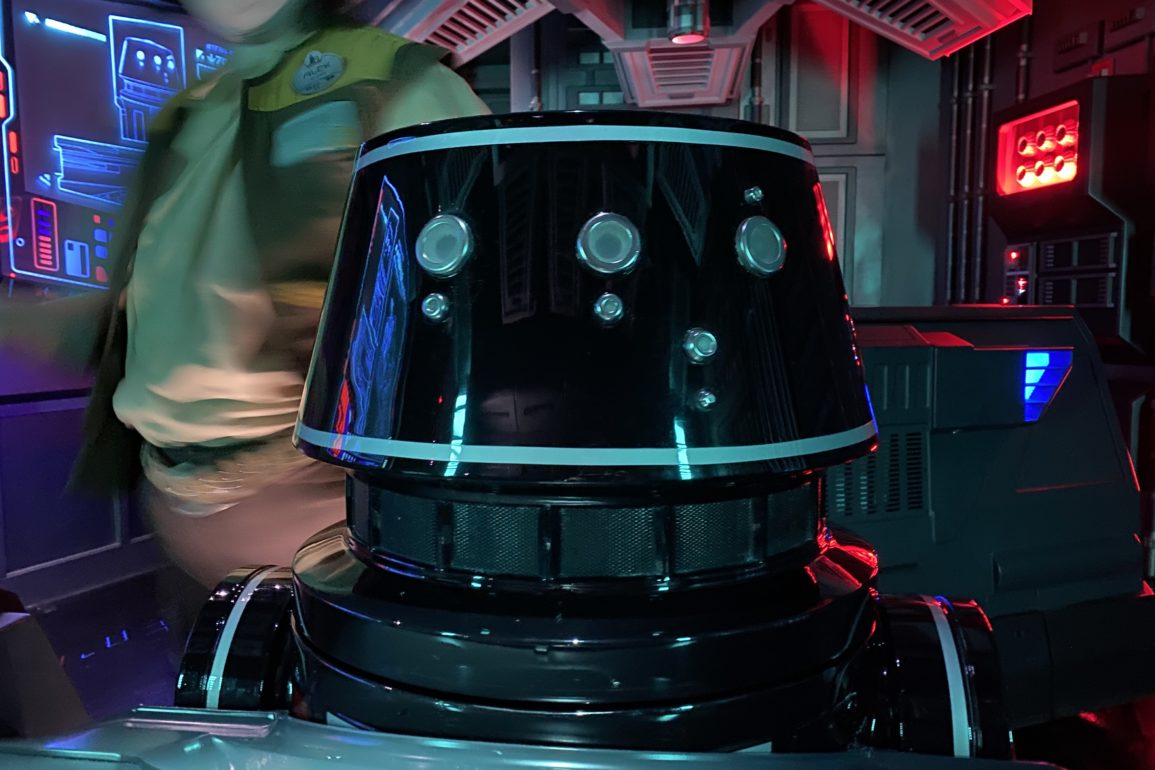 Hello from another steamy day at Disney’s Hollywood Studios! Not even the heat could keep us down today as we were ready to have some fun in Andy’s Backyard, Black Spire Outpost, and every other spot in between. Let’s get started!

It was quite the day for finding shirts, as we found several new ones today scattered across the park. This was one of two new shirts featuring “The Child” from The Mandalorian series.

Next we found this new ladies Halloween shirt featuring Mickey Mouse in this seasonal finery. We would love to be on his “Treat Squad”! This shirt was found at Legends of Hollywood and retails for $39.99.

This was just one of the shirts we found at Rock Around The Shop, and it matches the new clear bag there too!

On our way into Galaxy’s Edge early in the morning, we caught this rare sight: an (almost) completely empty Grand Avenue. Thinking back to before the temporary closure of the parks when this area would fill with people shoulder to shoulder waiting to “rope drop” Galaxy’s Edge, it seems so strange to see this area empty at this time of day.

We noticed a change in the queue setup at Rock ‘n’ Roller Coaster a few days ago, and today, we got to see it in action. The rope barriers are still being used, but only to separated the line from general traffic, rather than to direct the line’s flow as they were being used before.

On Sunset Boulevard, we met this Annual Passholder and asked if we could take a picture of her amazing jacket. She made it herself, and her favorite part about it is a hidden detail that you only get to see if you ask. When she pops the collar, underneath the collar is written, “These are not the droids you are looking for.” We were blown away by her creativity and this work of art!

Neon has been returned to the upper portion of the Legends of Hollywood marquee sign. This has been a long running refurbishment, but it seems we are in the final stretch now.

On the side of the building, scrim fabric has been added, covering large portions of the sign including both neon and printed areas. For more pictures and information, see our full article here.

Inside Legends of Hollywood, we found this wonderful display featuring some of the newest holiday themed items including the Oogie Boogie dress from Dress Shop and the Jack Skellington canvas backpack from Loungefly.

We found these fun new youth socks featuring the Main Mouse himself at Mickeys of Hollywood today. This set includes two pairs of socks and retails for $13.99.

We were super excited to ride Star Wars: Rise of the Resistance now that all of the recent technical issues seem to have been solved. We did experience one lingering issue however, which was that our R5, didn’t have functional lights. He still had full motion and sound, but did not light up more than a flicker throughout the ride. We noticed most of the other ride vehicles had fully functional R5’s, but a few had their lights our like ours. Poor R5, he’s had quite a rough time recently!

It was an interesting day for Guests hoping to snag a boarding group as the 2pm batch of boarding groups lasted for over a minute. With boarding groups filling up in under 20 seconds recently, this was quite unexpected. We hope this helped Guests get into the attraction!

On our way out, we stopped to enjoy the Green Army Men playing their marching beat for the Pixar Motorcade. We love the details on these characters!

We had a great time at Disney’s Hollywood Studios, and we hope you enjoyed coming along with us. Have a magical day!