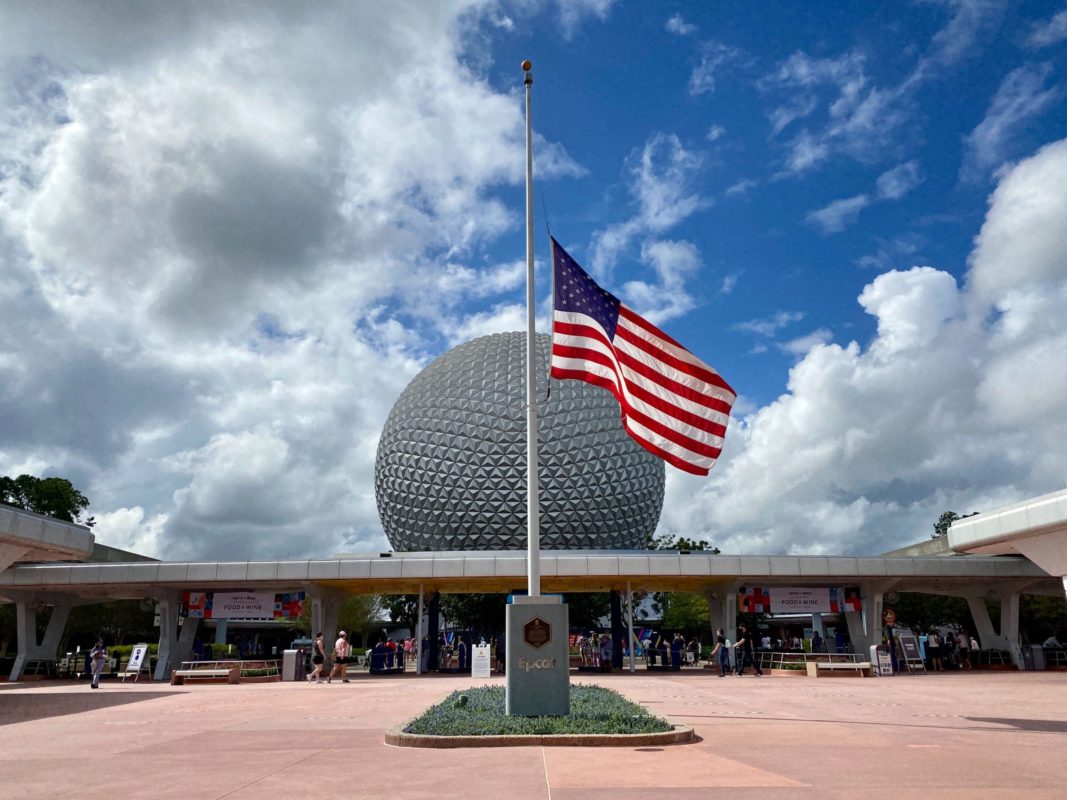 Hello from a quiet and rainy day here at EPCOT! We were happy to have a nice day strolling around World Showcase today, so let’s get started!

We started by checking in on a couple of construction projects to see if any work had been done overnight. At Guardians of the Galaxy: Cosmic Rewind, we were certainly disappointed. While the workers were certainly present and working hard, no outward progress had been made.

Work was also actively being done on the fountain at the entrance of the park, but no additional pieces were brought in that we could see. The pylons were still wrapped in their protective foam coating.

The Future World West Restrooms were having some work done to a specific exterior portion of the building. Gypsum board appears to have been installed to this section recently.

A small scrim box has appeared near the Imagination Pavilion recently. It’s unclear what work is being done here, but considering the size and placement of the box, it’s most likely concrete work.

Construction walls have been removed around most of the new Future World East Restrooms near the current Mouse Gear. The facilities are not currently available yet, but should be soon.

Over at the France Pavilion expansion for Remy’s Ratatouille Adventure, we noticed that most of the street lights were on today, which was exciting to see.

We found a couple of things as we traveled the World Showcase. First, entrance into the Mexico Pavilion was being managed today, with entrance on the right and exit on the left, as usual. While the extended queue was set up and ready for larger crowds, it was not being utilized today.

We found another change to a Taste of EPCOT International Food & Wine Festival food booth menu. The Japan booth has switched out the Kirin Draft Beer for Samurai Sencha Ale, available in two sizes.

In merchandise, we found a couple of things today. First was this Star Wars bucket hat, complete with reflective trim and lettering. The overall galaxy print really completes the look. This hat was available at Mission: SPACE Cargo Bay and retails for $29.99.

We found two new Pandora charms finally here for Taste of EPCOT International Food & Wine Festival. The first, featuring Remy on one side and the Festival logo on the other side, is a Annual Passholder exclusive.

The second, featuring Figment on one side and and an illustrated Festival logo on the other side, is available to all guests. Both retail for $85 each.

A Spirit Jersey has finally appeared on the scene for the new Food & Wine merchandise which released recently. This adorable blush rose colored jersey features the Queen of Cuisine herself, Minnie Mouse. Are you a fan of the full back design, or do you prefer the simple lettering across the shoulders? We hope there’s Spirit Jerseys coming for the other merchandise lines in this year’s collection!

While we had a good day strolling around World Showcase, we will never forget the horrific events of September 11, 2001. This is a day for remembrance, and for honoring those who lost their lives on this day. May everyone touched personally by those events find peace and healing.