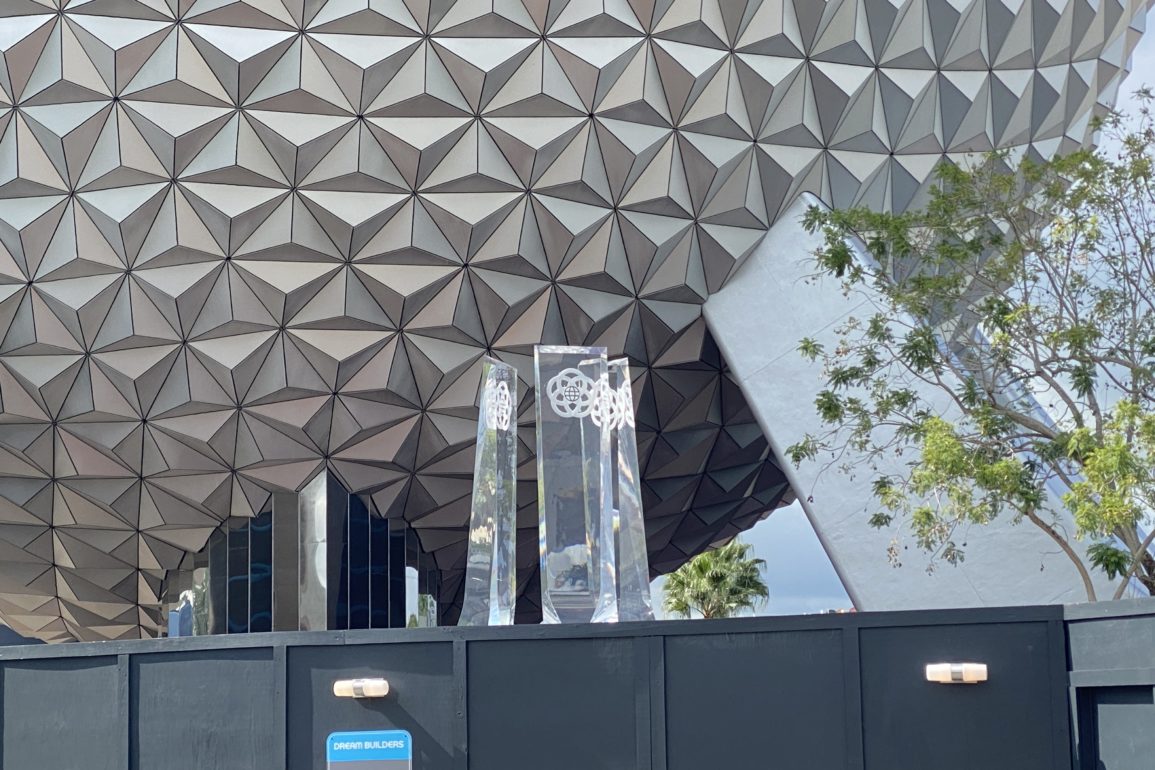 Hello from another hot day at EPCOT! While it started out as a partly cloudy day, it never rained and was fairly breezy all day, which was a nice change. Everyone else must have known it was going to be a nice day, because it was a bit crowded for a weekday! We still managed to have some fun and see some new things, so let’s get started!

When we entered the park, we noticed right away that the lucite pylons that will be the focal point of the new entrance fountain have been unwrapped. They were recently wrapped in plastic from the bottom of where we can see here to about halfway to the logo to protect the pylons during construction.

You know you can count on us to bring you all the exciting Disney news first, and we had a delicious story for you this morning! The Flavors From Fire Taste of EPCOT International Food & Wine Festival booth opened today, and the breeze carried the smell of the meat on the grill all the way up to Mouse Gear. We were so excited to be among the first in line for this booth!

New on the menu this year is the S’mores Whoopie Pie-lon, a delicious dessert perfect to pair with all the mouthwatering savory options at this booth. For a full look at the booth and the menu, plus reviews of all the menu items, see our article here.

While Flavors From Fire did open today, there are still a few booths that have yet to open at EPCOT, including The Donut Box, which still says “Coming This Fall.” With official “Disney Fall” already here, we wonder if they’re waiting for actual calendar Fall?

In construction news, the construction being done to the Future World West restrooms is coming along quite quickly. It appears the addition is prepared for the exterior wall surface to be installed.

The former location of Electric Umbrella in Innoventions East has been partially demolished, with the exterior canopy removed and the front wall and windows torn away. Large chunks are missing from the roof where machinery has chipped away at the wall. Some of the brightly colored umbrellas that decorated the interior of the restaurant can be seen hanging from the roof. For more pictures and information, see our full article here.

A new construction wall has been installed, separating the Liquid Layer splash area from the rest of the walkway connecting World Showcase with the original Innoventions area. Safety cones and construction tape could be seen in the area behind the wall, although not much else was visible. We’ll be watching this site closely to see how things develop.

Over at the Skyliner restrooms, the construction barriers have been removed, and the water fountains and utility door are now fully accessible. It’s nice to see this work finally completed!

In merch news, we found this fun set of park icon cookie cutters. Whether you’re a fan of Walt Disney World or Disneyland, there will be a cookie for you if you make them using this set. We found it at Mouse Gear and it retails for $24.99.

We also found this late comer to the magnet party, a Figment Annual Passholder International Food & Wine Festival 2020 magnet. This was available at Mouse Gear and World ShowPlace Pavilion for $14.99.

We found these fun rhinestone bobby pins which spell out “Star Wars” for $9.99 at Mission Space: Cargo Bay. Everyone needs a little bling now and again!

In the France Pavilion at Les Halles we found this fun magnet featuring Remy from Ratatouille with a quote we can all relate to: “The only thing predictable about life is its unpredictability”. This magnet retails for $14.99.

In the United Kingdom Pavilion, we found this one lonely Dooney & Bourke handbag at The Tea Caddy. We asked a Cast Member if more were available, but she replied that they were told they wouldn’t be receiving the bag collection in-store; it would be online-only. This bag then showed up in their restock shipment. We were certainly happy. We love seeing new things!

We added some sparkle to our day when we found these new ears at Mouse Gear. With the thin, glued-on glitter ear and puffy fabric bow, these are sure to get you noticed. They retail for $29.99.

Around World Showcase, we found some new sights. Menus have finally been added to the large square cabinets near each Festival food booth. The other sides of the square still show the QR code for the digital Festival booklet.

With the State of Florida allowing bars to reopen, certain bars and beverage carts are able to reopen and return at Walt Disney World. Today the beer cart returned to the Canada Pavilion, offering guests Canadian beer on ice.

The Mexico Pavilion had a long line for a weekday, but it moved quite fast. We got inside in under five minutes, but the line for La Cava del Tequila was another story.

Its line stretched all the way up the ramp to enter the lower part of the pavilion. With the return of the popular Horchata Margarita, it’s no surprise that guests would want to stop here today!

We found another long line at the Norway Pavilion, or rather the China Pavilion, because that’s where the line for Frozen Ever After began. The wait time for the attraction at this point was 60 minutes. We were impressed with this queue!

Several booths that normally only open on weekends were open, like the Alps booth, Spain booth, and Block & Hans. It was nice to be able to sample those tastes on a weekday!

The bar in the Germany Pavilion, the Weinkeller, was one of the locations which opened today, along with Enoteca Castello, the bar in the Italy Pavilion. Guests can now purchase the popular Mozart Chocolate Pumpkin Spice Liqueur shot at the bar, as well as many wines and beers by the glass or other liqueurs by the shot.

The Sommerhaus refreshment location will be opening on Saturdays moving forward, but with some menu changes. The menu has been reduced to only a selection of wine, beer, and a jumbo pretzel. No bratwurst will be available. Registers have been set up outside of the kitchen area, effectively keeping Sommerhaus closed and opening a pretzel and beer stand in front of it.

We certainly had a busy, fun day at EPCOT today, and we hope you enjoyed coming along with us. Have a magical day!