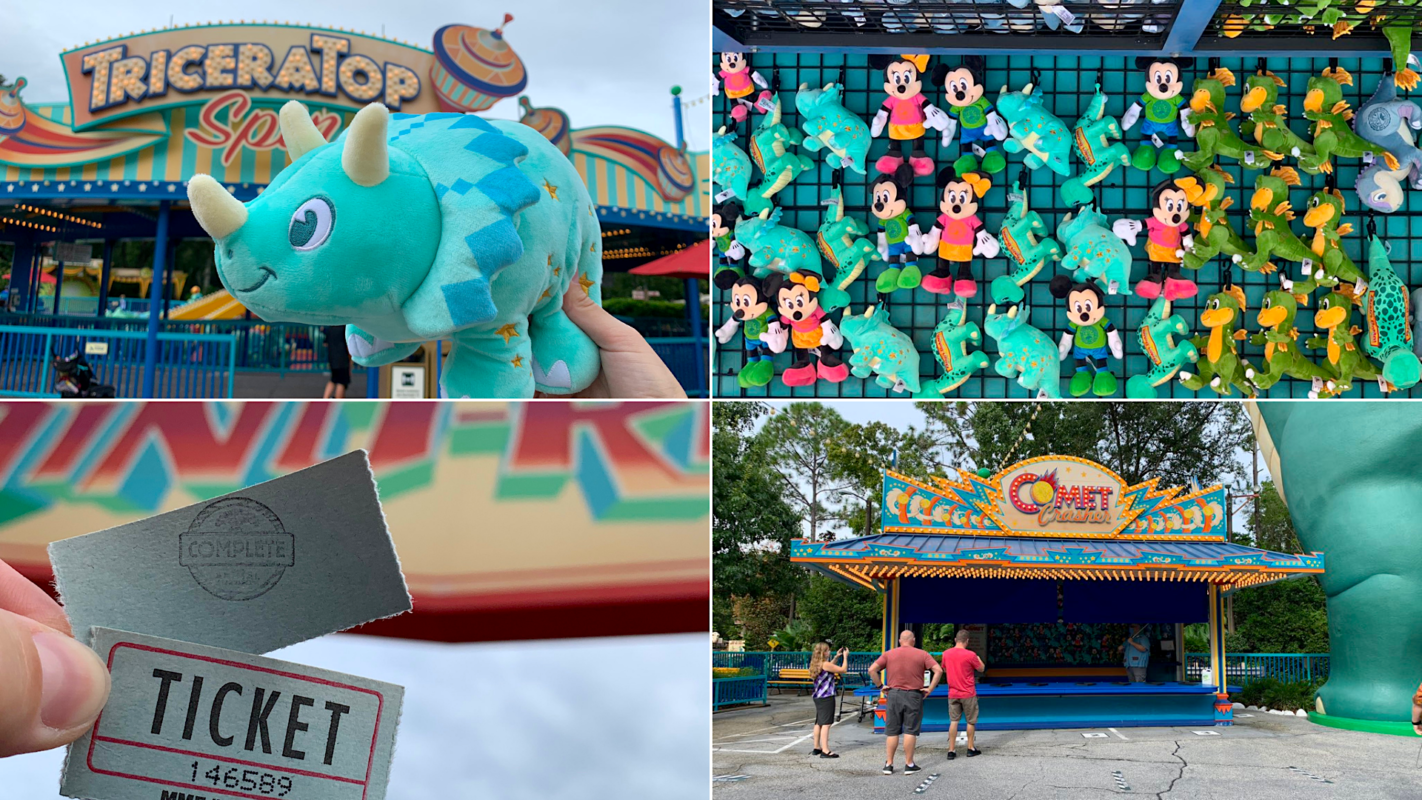 If you’re looking to try your luck, two of the Fossil Fun Games located within Chester and Hester’s Dino-Rama in DinoLand U.S.A. have finally reopened, and best of all, the kiosks have debuted an all-new plush collection themed to DinoLand.

We arrived at Disney’s Animal Kingdom bright and early to partake in the games and try to win some prizes!

And here’s a look at the adorable new plush, which are unlike anything the land’s ever featured as part of their prizes, including the dinosaur from Donald’s Dino-Bash, plus the beloved “Cementosaurus” you walk under as you enter Dino-Rama.

There’s also Aladar from Disney’s Dinosaur (and the DINOSAUR attraction), plus the dinosaur guests get to ride in on TriceraTop Spin—yes, he even has the little golden stars embroidered onto him! Mickey and Minnie are seen in full Dino Institute outfits, plus the Disney’s Animal Kingdom logo on one shoe.

This Triceratops is available in small or medium.

Do note that the prizes do come in varying sizes, from small, medium, and large.

Aladar is available in small and large size.

Mickey is available in small and large size.

Cementosaurus is available in medium and large size.

Minnie is available in small and medium.

Daryl is available in small and large.

You can watch us play and win prizes at Disney’s Animal Kingdom by following along on our YouTube livestream below (DinoLand hijinks start about 15 minutes into the stream):

Now, if you’re actually curious as to the changes at the newly-reopened games, take a look at some of the new protocols below:

Social distancing markers have been placed at the games, with numbered spots for guests to stand at, and large pumps of hand sanitizer.

At both Comet Crasher and Bronto Score, balls used for the games are dunked in sanitizing buckets for a proper washing in between games.

At this time, the other Fossil Fun Games kiosks remain closed at this time.

Will you be heading over to win some prizes? Let us know in the comments!

PHOTOS: Guests Evacuated from Splash Mountain at the Magic Kingdom This Morning