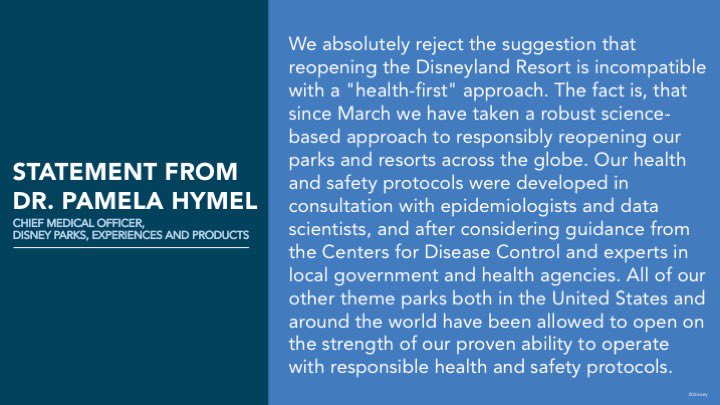 Disneyland Resort’s Chief Medical Officer Dr. Pamela Hymel has clapped back at Governor Newsom in response to claims earlier that reopening the resort’s theme parks is unsafe, based on science and data. Her full statement on behalf of the Disney Parks, Experiences and Products division can be found below.

When asked about Bob Iger’s sudden leave from the Governor’s Economic Advisory Council, Newsom revealed earlier today that it was due to “disagreements” over reopening guidelines:

There’s disagreements in terms of opening a major theme park. We’re going to let science and data make that determination. I understand the dialectic, the friction that many business leaders have that they want to move forward… but we’re going to be led by a health-first framework and we’re going to be stubborn about it.

Governor Newsom stated that California in “no hurry” to issue reopening dates or guidelines, stating science will guide any announcements on when and how it will be safe to reopen major theme parks.

Last week, it seemed that theme park reopening guidelines were finally going to be issued, however there was backlash from the theme parks, ultimately leading to a postponement. On Monday, Newsom refused to answer a question regarding Disneyland’s reopening.

Next
Voctave, Featuring Members of EPCOT’s Voices of Liberty, Release “The Corner of Broadway and Main Street, Vol. 2” Now Streaming on Amazon, Apple Music, and More