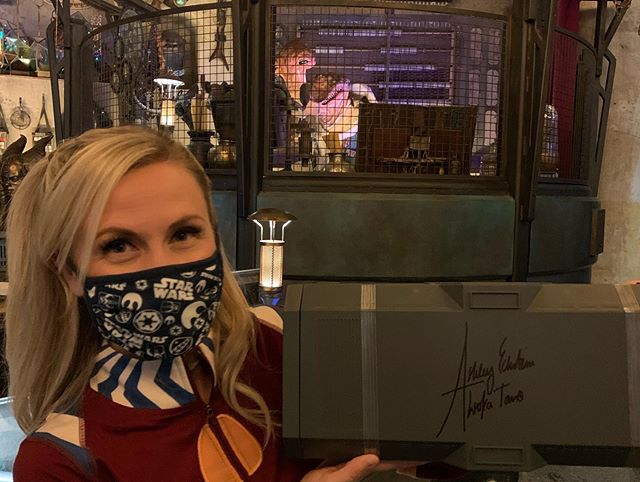 She’s no Jedi. Ahsoka Tano’s newly-revamped lightsabers from the recent “Star Wars: The Clone Wars” series are now available at Dok-Ondar’s Den of Antiquities in Star Wars: Galaxy’s Edge at Disney’s Hollywood Studios. They’re the first-ever color-changing legacy lightsabers to come to the land, and for Clone Wars mega fans, there are even some cases signed by Ashley Eckstein for the first couple hundred customers, while supplies last.

Eckstein revealed the new lightsaber—and its color-changing abilities on Instagram tonight after a special event was held for a lightsaber meetup coordinated by the unofficial Galaxy’s Edge Discord group.

The pair of lightsabers can shift from green to blue, and like all Legacy Lightsabers, you can opt between two different sizes of removable blades. Ashley Eckstein, who voices Ahsoka Tano, posed with the new additions inside Dok-Ondar’s Den of Antiquities with a team of Batuuans.

The Legacy Lightsaber set is now available, however pricing has yet to be revealed. The previous version of Ahsoka’s lightsabers was recently restocked, but will be retired with the introduction of this newer set. Ahsoka’s first legacy lightsabers retailed for $199.99.

Do note that Disney Park Pass reservations for Disney’s Hollywood Studios are currently fully booked for tomorrow regardless of whether you’re an Annual Passholder, resort guest, or have a dated ticket. (Trust me, I looked.) That being said, only the lucky few with reservations to Disney’s Hollywood Studios will be amongst the first to purchase this new lightsaber. Will you be making reservations to add these to your lightsaber collection soon? Let us know in the comments!