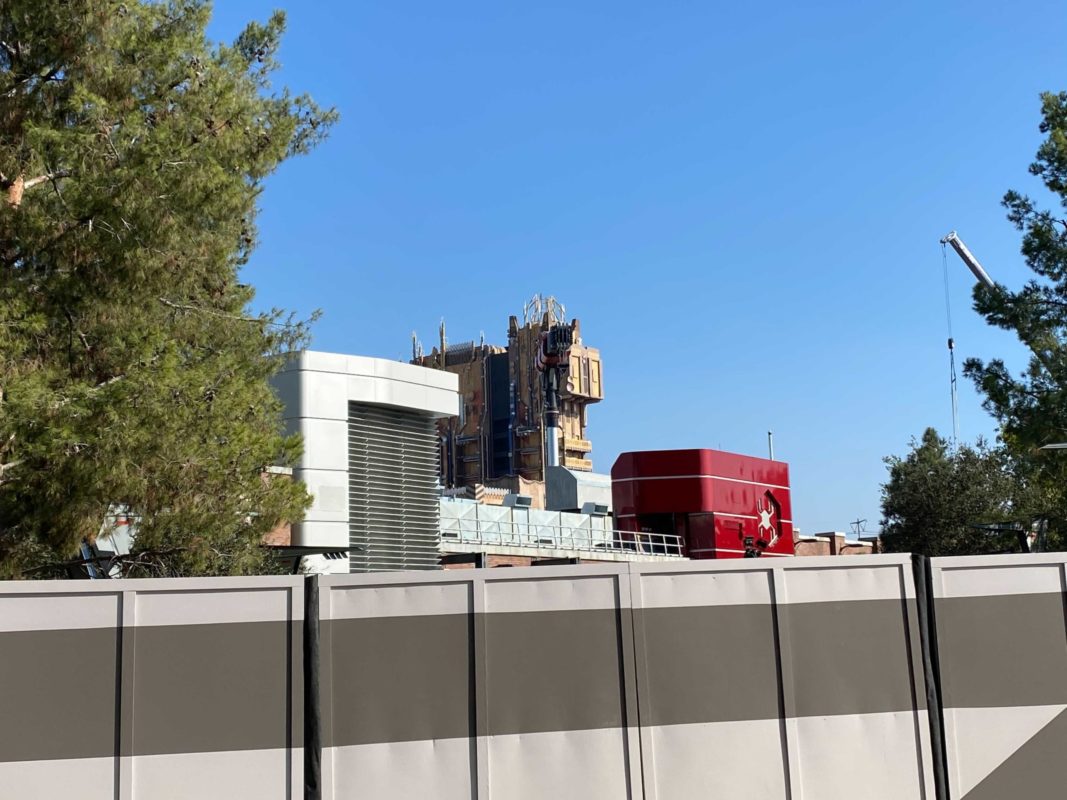 With the reopening of Buena Vista Street at Disney California Adventure, we’re getting a first look at the MARVEL Avengers Campus, which is reaching its final stages of completion.

Portions of the land are visible within spaces that are currently open for Buena Vista Street, mainly the two Spider-Man offerings: WEB SLINGERS: A Spider-Man Adventure and the WEB Suppliers store.

To the left, we see an exposed brick wall, part of the WEB SLINGERS attraction. On top, you can see a number of odd pulleys and antennas.

Contractors were on site yesterday overseeing the remaining construction of Avengers Campus.

Off in the distance, you can see the rectangular red features of the WEB Suppliers store.

Speaking of WEB SLINGERS (yes, it’s in all caps), here we see the facade of the attraction, where the young inventors of WEB are hosting an open house, and of course, everything goes haywire and Spider-Bots start running amok. On the brick facade, we see a retro-styled “Stark Industries” logo painted on from the Howard Stark era of the company, a nod to its humble beginnings contrasting against the sleek, mechanical module it’s attached to.

Contrasting against the rustic peaks of the Cadillac Range, we see metal angular lighting features.

We got a sneak peek of these light fixtures with the latest concept art release, flanking both sides of the circular entrance. Guests will have a full view of the WEB SLINGERS: A Spider-Man Adventure facade as they enter the land.

Here we get a better look at the bold red WEB SLINGERS facade, with Guardians of the Galaxy – Mission: Breakout! towering in the back.

Currently, the gates leading into the area are barricaded off as guests line up against this area to purchase snacks from the nearby snack carts next to Carthay Circle.

Avengers Campus is currently delayed at Disney California Adventure, but we recently got our first look inside WEB SLINGERS to see the ride vehicles in action, so progress is moving quickly on-site. Are you looking forward to living out your superhero adventure at the Avengers Campus? Let us know in the comments below, and keep reading Disneyland News Today for all the latest construction updates at Disneyland Resort.