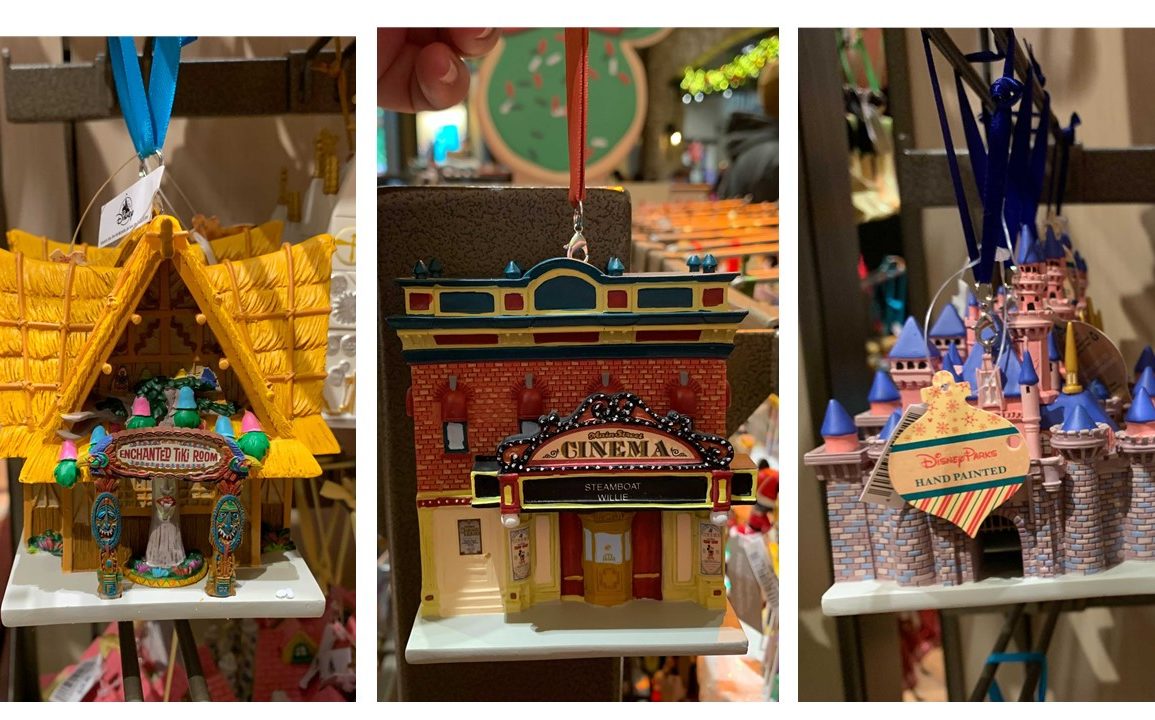 Just as ornaments featuring beloved attractions and buildings recently appeared at Walt Disney World, Disneyland has joined in the holiday fun. We found two designs that have already debuted at Walt Disney World, but the third only appears at Disneyland Resort. At World of Disney, Enchanted Tiki Room, Main Street Cinema, and Sleeping Beauty Castle Ornaments will give you a look inside.

We featured this ornament previously, as the Enchanted Tiki Room attraction appears at both Disneyland and Magic Kingdom.

On the front of the ornament, you’re greeted by two tikis.

Both sides are pretty much the same.

You can almost hear the drums banging along and birds singing a chorus as you look at this representation of the show inside.

The front view may make you miss Main Street, U.S.A., especially if you live far away from Disneyland Resort.

It isn’t too hard to imagine that the depiction of Steamboat Willie may come to cinematic life.

Now for the ornament that is exclusive to Disneyland Resort! Of course, a Cinderella Castle ornament may be available at Walt Disney World, but this Sleeping Beauty Castle ornament features the original Disney castle.

The front is a remarkable representation of the iconic castle. Disneyland fans may want to purchase this ornament, especially since the beloved park has remained closed since March 2020.

Inside, you can see the spinning wheel that started her adventure.

The details are different on each side with one side featuring a cylindrical tower and the other a rectangular one.

We found these ornaments at World of Disney in Downtown Disney District. They may be similar to the attraction and building ornaments from last year, but the range of buildings and the detail has improved.

What do you think about these new ornaments? Which ones would you like to see on your Christmas tree this holiday season? Comment below.