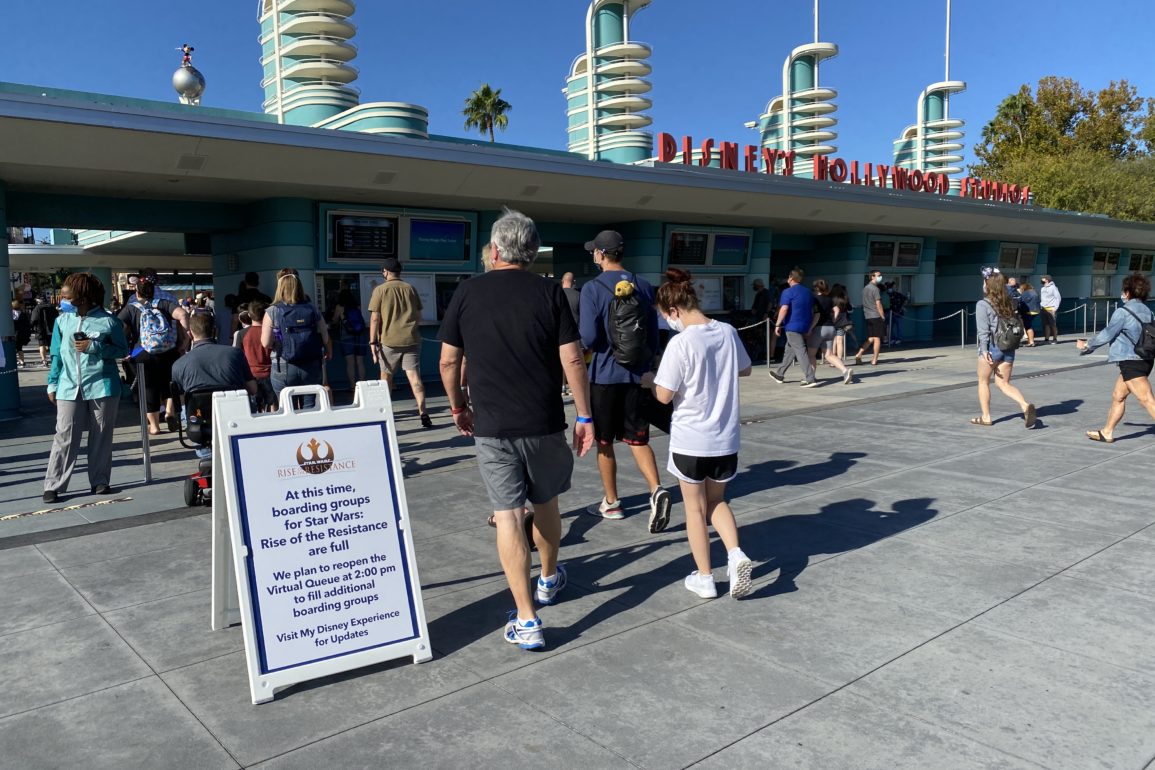 Hello from a busy day here at Disney’s Hollywood Studios! We had an early start to our day with the new boarding group system starting today with the first group distributing at 7am, and we were on property to attempt to snag a spot. Sadly, like a lot of guests, we experienced a glitch that kept us from getting a boarding group, but we came to the park anyway to see what new fun things we could find to show you. Let’s get started!

When we arrived at the park, we were greeted by “boarding groups are full” signs outside of the park. We hope we have better luck next time!

After waking up early, we were ready for some coffee, and found that Christmas seasonal beverages have returned to Joffrey’s Coffee. The White Chocolate Gingerbread Latte sounds delicious!

The much-anticipated Ahsoka lightsabers arrived a few days ago at Dok-Ondar’s Den of Antiquities, and we have to say, they were worth the wait. We got to try out the color change effect and it’s pretty amazing. There’s a possibility that the old Ahsoka hilts will be retired soon, so if you’ve had your eye on those, now’s the time to buy them.

We’ve been following the refurbishment of the front facade of Legends of Hollywood for some time now, and we found a big change this morning. Neon lettering for the suspected name change has been installed on the building, soon to be “The Majestic”. The lettering on the marquis underneath the scrim fabric spelling out “Legends of Hollywood” seems to have been removed.

Change is also on the horizon for Frozen Fractal Gifts, the gift shop at the exit of For The First Time In Forever: A Frozen Sing-Along Celebration. The shop did not reopen with the show, and is now being stripped of merchandise. We suspect that the interior will be blocked from view with black plastic or curtains very soon.

New flags have been installed near Star Wars: Launch Bay advertising The Mandalorian on Disney+.

New billboards have also been installed along the side of the Voyage of the Little Mermaid building showing dynamic art of the Mandalorian himself. The popular show has a new episode made available to stream to Disney+ subscribers every Friday.

We found some new merchandise today that caught our eye. This new long sleeve distressed adult shirt matches the recent line of merch for Rock ‘n’ Roller Coaster, and would look right at home backstage or onstage at a concert. The front is low key with just the ride name on the breast pocket area.

The back sports the flashy, rocker logo for the ride. We found this shirt at Rock Around The Shop for $39.99.

We found more shirts as part of the new Black Widow movie merchandise line. This adult t-shirt has contrast color piping at the sleeve seams and a body armor print. The back has the word “Taskmaster” printed on the lower left. We found this shirt at Keystone Clothiers for $36.99.

Next we found this distressed adult t-shirt featuring the Avengers logo with the Black Widow logo worked in at the bottom of the “A”. This shirt was also at Keystone Clothiers for $36.99.

With cooler weather moving in, we’re thinking about how to stay cozy and anything soft is extra important right now. This Grape Soda pillow would be perfect for on the couch when it’s chilly, it’s so soft! We found this pillow at Mickey’s of Hollywood for $26.99.

We found the latest addition to the shoulder pet line hanging out with the other toys in Mickey’s of Hollywood. This Forky plush shoulder pet is perfect to take a little bit of the Toy Story gang with you wherever you go.

We’ve been finding a lot of really great hats lately, and today was no exception. We found this “Do Or Do Not, There Is No Try” hat featuring an image of Master Yoda along with his famous line. This hat is available at Tatooine Traders for $27.99.

This one had a moving piece, as the spiderweb rotated in place.

The final one we found came on this fun present card and is an Annual Passholder exclusive pin. All are available at The Darkroom for $17.99 each.

We found one more pin worth noting, this Celebrate Today limited edition pin in honor of National Button Day. We found this pin at The Darkroom for $17.99.

With Christmas taking the parks by storm, we found some new Christmas ornaments today that took our breath away. These tiny, detailed miniature attraction buildings and landmarks are perfect for the parks enthusiast. There’s definitely an ornament for everyone!

Mickey & Minnie’s Runaway Railway has begun testing the addition of plexiglass barriers to their ride vehicles by adding a barrier to a single car, similar to the way Star Wars: Rise of the Resistance did in their plexiglass testing phase. We noticed that hazard tape has been put on the corner of this barrier to make it more visible in the low light of the loading and unloading areas of the attraction to minimize the chance of a guest hurting themselves on the corner of the barrier. We’ll be watching for additional barriers on ride vehicles, so be sure to follow us for the latest updates.

While Gertie still isn’t wearing her Santa hat yet, Christmas ornaments have appeared in Echo Lake, giving this area a decidedly festive feel. We are loving the holidays this year!

We had a great day at Disney’s Hollywood Studios, and we hope you enjoyed coming along with us. Have a magical day!