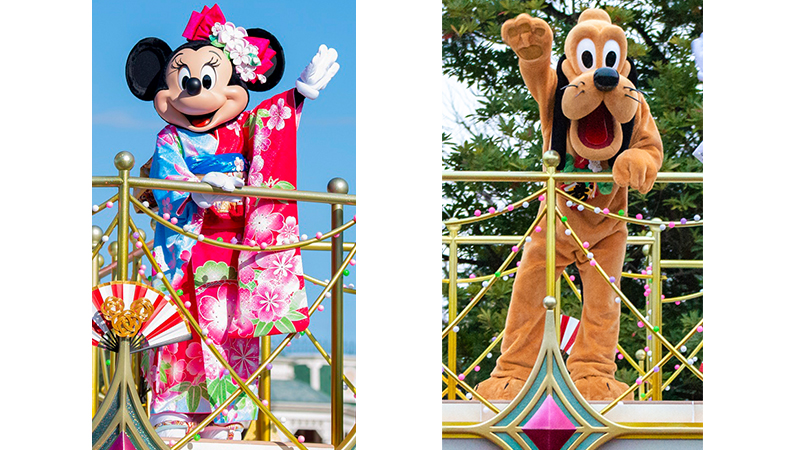 New Year’s is usually a small affair at Tokyo Disney Resort, with the Disney Friends donning traditional Japanese kimonos and greeting Guests around both parks. Even though the Oriental Land Company cancelled almost all events through March 2021, it seems like New Year’s will mostly come as usual after all!

2021 is the year of the Ox, so decorations and merchandise will focus around oxen and Clarabelle Cow!

Tokyo DisneySea will also see its second overlay for the Mickey & Friends Harbor Greeting, after the Christmas version. Again, this will likely utilize the same costumes and music as the normal New Year’s Greeting does since it’s the same barge.

Both the entrance at Tokyo Disneyland and the Passaggio MiraCosta at Tokyo DisneySea will feature kadomatsu, a traditional Japanese New Year’s decoration used to welcome ancestral spirits of the harvest after the new year. They’re usually made of bamboo, pine, and Japanese plum sprigs along with flowers and are considered temporary homes for the spirits or the gods, and are traditionally burned after January 15th to release their spirits. The kadomatsu will be on display at the parks from December 28th through January 15th.

As is tradition for all Tokyo Disney Resort events, a special Disney Resort Line day ticket will be available at all four stations from December 26th through January 5th, 2021.

A number of items both traditional-style and adorable will be available to commemorate both the new year and the Year of the Ox! The offerings aren’t as extensive as last year, but still display the traditional New Year’s spirit!

All of the entertainment offerings and decor will be available at both Tokyo Disneyland and Tokyo DisneySea through the dates listed, so be sure to grab a kimono and head on down to celebrate the (hopefully better) new year!