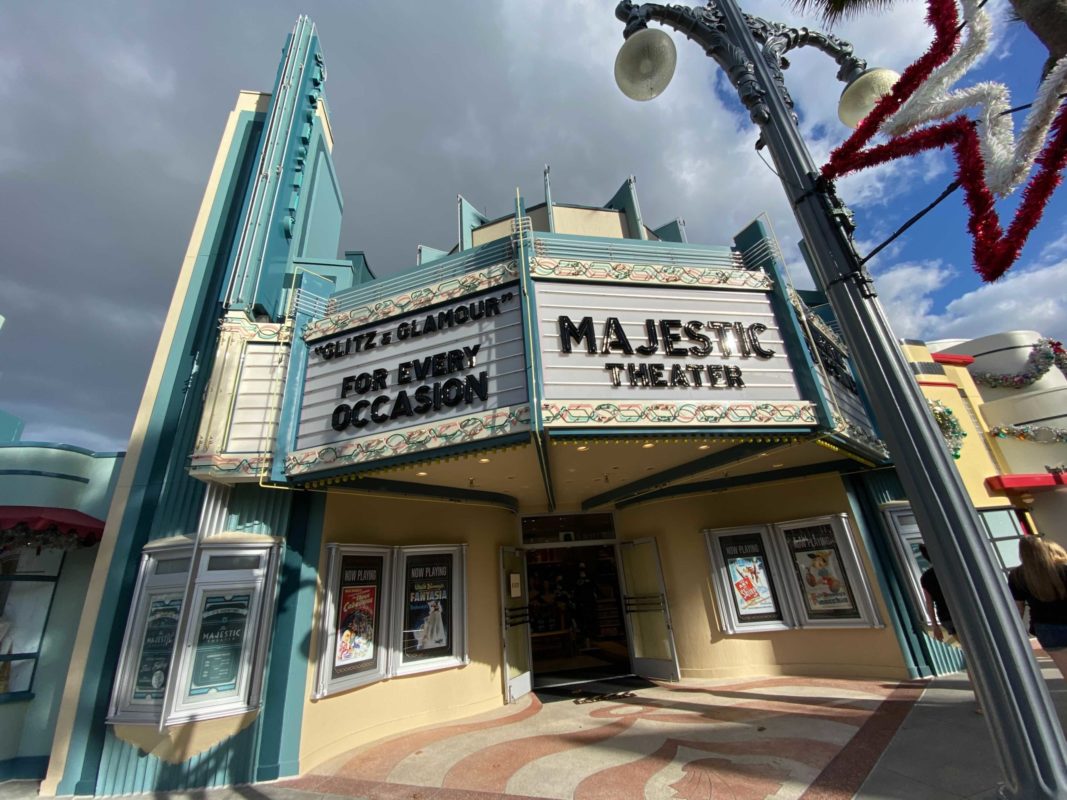 Disney’s Hollywood Studios is home to the Hollywood that never was—and always will be… and now with the full reveal of the Majestic Theater, it seems Disney has retconned a piece of Hollywood history in favor of other Disney classics. Let’s take a walk down Sunset Blvd. for a look at the finished marquee.

Finally, neon and marquee lettering have been added to the now-finished Majestic Theater.

Evoking the feel of golden Hollywood, the marquee features bold, black lettering in various sizes (for emphasis, of course), advertising “Glitz & Glamour” for every occasion. This section of the store of course features frocks and gowns from The Dress Shop, as well as a variety of Loungefly purses, and other on-trend accessories.

Once again, I can’t get over these raised letters. Between the bold marquee and the pink and teal neon, it evokes the perfect feel of celluloid kitsch.

However, for a sign that flaunts the “Where The Stars Shine” tagline, you’ll notice that the stars beneath the marquee have changed…

Let’s take a look at the new posters under the Majestic Theater.

Classic film posters like The Wizard of Oz and Gone With The Wind have been replaced with vintage animated films or shorts like The Three Caballeros, Pinocchio, and The Art of Skiiing, all from similar eras in the late 1930s and ’40s. Of course, Great Movie Ride fans will recognize that the previous posters remained as almost a nod to the former attraction, which featured The Wizard of Oz in a show scene and Gone With The Wind in the final film montage (as well as Scarlett’s barbecue party dress in the queue.)

Given the problematic themes and histories behind these two classic films, it seems Disney is moving away from them, opting to showcase their own cinematic history instead.

What do you think of the new look for the Majestic Theater? Will you miss the nods to the Great Movie Ride and other classic films, or does the fresh paint scheme and neon make up for the loss? Let us know in the comments below!