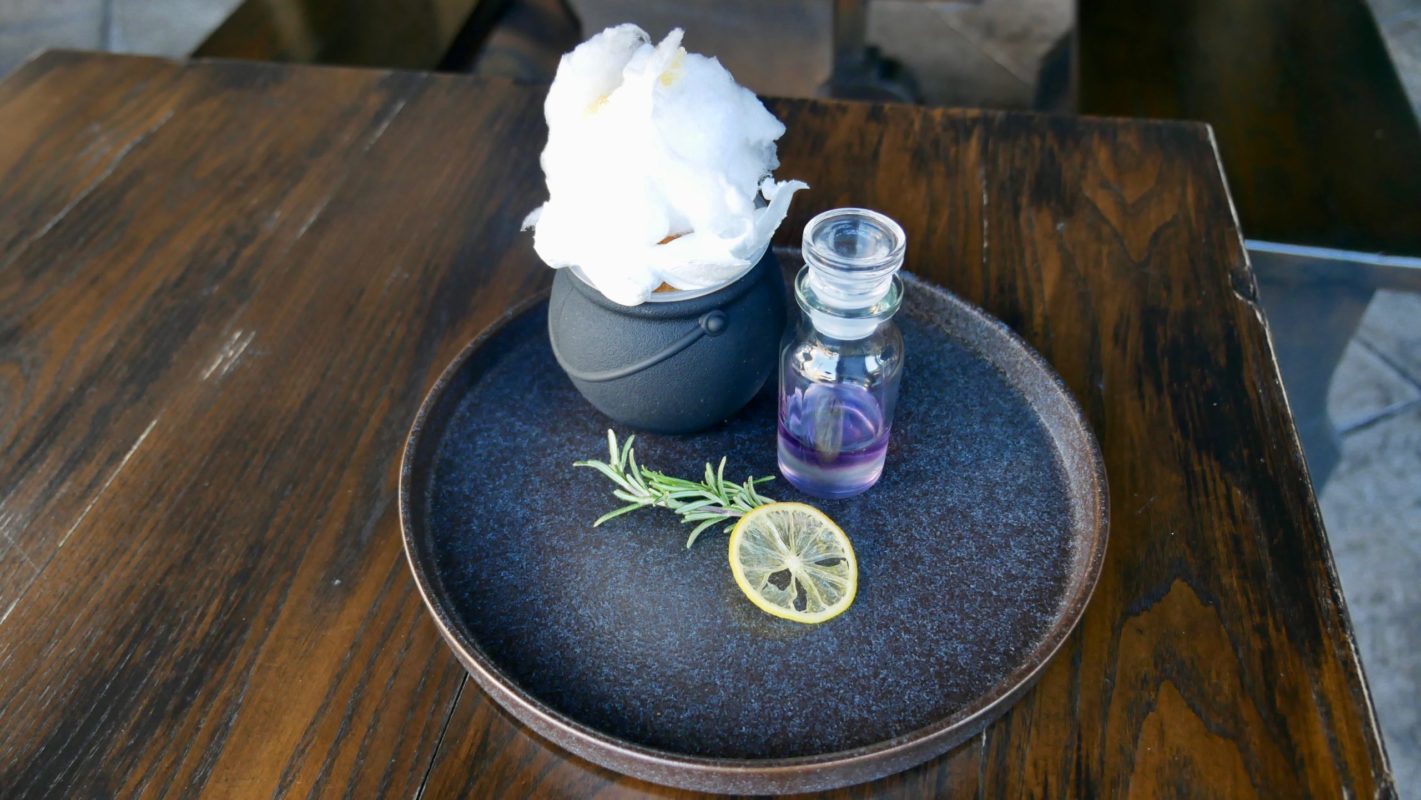 While the four Hogwarts House Churritos at The Magic Neep may have rallied your school spirit, what if you’re already a grown witch or wizard? Then look no further than the new Witch’s Cauldron Lemon Cake at The Three Broomsticks in Hogsmeade at Universal Studios Japan! This enchanting cake comes with several mystical layers, each serving part of the illusion!

The full assortment comes on this lovely little tray. You get the cauldron with the cake, a small vial with some “magic potion”, and a garnish featuring a dried lemon. Note that if you order this, you will have to wait a few minutes for it to be delivered to your table by a very helpful Crew Member.

The cauldron cake comes in a plastic cauldron with dry ice at the bottom, which creates a mystical, smoky look as it evaporates. Plus it helps weigh the cauldron down so you don’t accidentally tip over the entire thing. Atop the lemon cake itself is some whipped cream and cotton candy, with some lemon popping candy on top.

The “magic potion” should be shaken before pouring it above the cake itself. The syrup is also lemon-flavored, but comes out a light purple once it has been mixed.

The end result, of course, melts the cotton candy into the syrup (and can make a bit of a mess if you don’t pour properly). Be sure you pace and properly plan where you will pour so the syrup doesn’t go all over your tray!

How does it taste? Well “extremely sugary” is a great start, with the top being covered in the magic potion and whipped cream petals. Once you get down in to the cake layer, it’s quite hard and cold. Evidently they keep these in the fridge before serving, because it can be a bit tough to cut into the cake, especially from the outset. This is where the dry ice (or the water that’s left over) comes in handy as it weighs down the cauldron so you don’t tip it over while trying to cut in to the cake. But overall, it tastes quite exquisite! The cake has a very light lemon tang that neither overwhelms nor gets lost in the mix. There’s also little dried chunks of lemon inside to add a bit of extra variety. But despite the refrigeration, it’s not dry and remains moist. The hardness is only because of temperature rather than staleness, fortunately.

All in all, I highly recommend this both for the taste and the experience of pouring the magic potion and watching the cotton candy melt away! You can find the magical Witch’s Cauldron Lemon Cake at The Three Broomsticks in The Wizarding World of Harry Potter at Universal Studios Japan, so grab a fistful of Galleons and head on down!