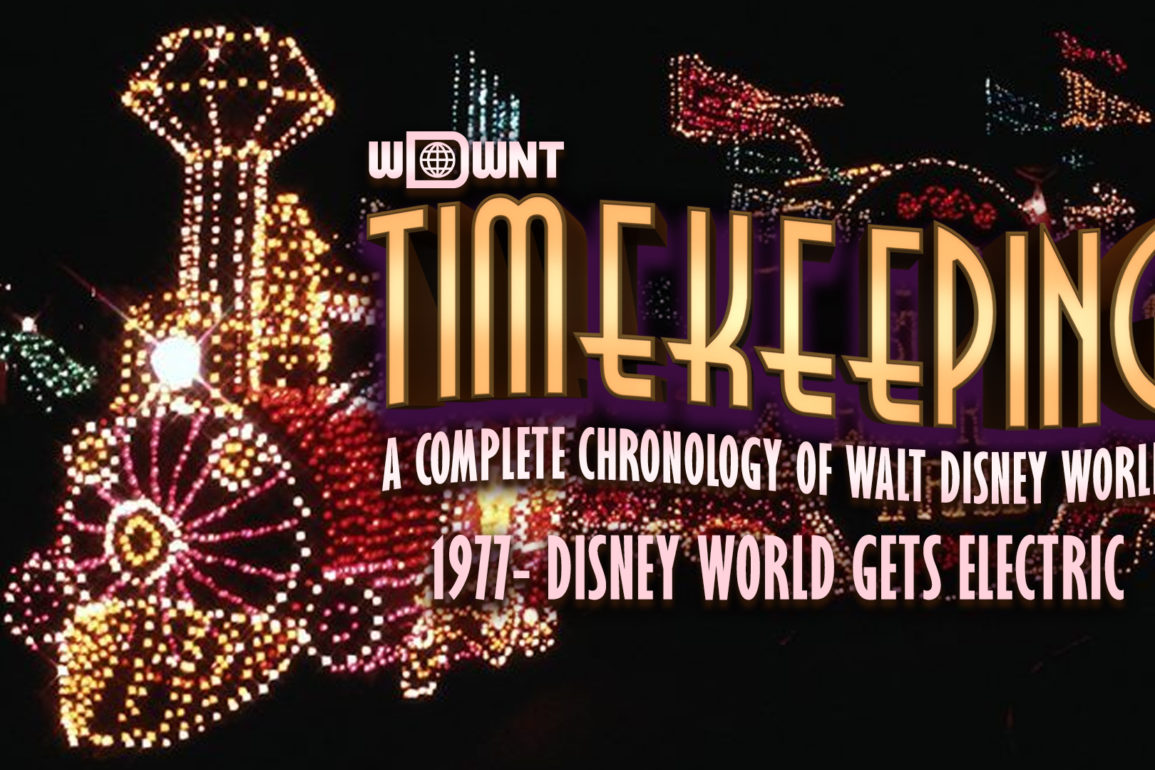 River Country’s June 1976 opening would prove to be the last major addition to Walt Disney World in the 1970s, but that doesn’t mean the resort would sit completely stagnant while EPCOT Center was being developed. These seemingly minor changes would last for decades and become staples, if not symbols of a Walt Disney World vacation. And while changes would still come, the 1977 development of EPCOT Center would form the foundation of the concept park that we would come to know once it opened.

There were minor changes in the Magic Kingdom. On Main Street, it appears GAF was no longer the sponsor of the Camera Shop, at least no longer listed as such on the guide maps. The Art Festival also seems to have left Main Street. Jimmy Carter was added to the Hall of Presidents.

However the main change to the Kingdom was the addition of the Main Street Electrical Parade on June 11. The parade was kicked off by the Blue Fairy and contained many of the same floats that the most recent version at Disneyland had. There were different units, such as Dumbo, and different characters that would change with the times. One of the new floats added was the famous Elliot float to promote the release of Pete’s Dragon. Also, a new finale float was added featuring neon on rotating mirrors.

Construction began at the Polynesian Oahu expansion, which closed the putting green section to add the next facilities. The Luau also got wind screens. Over at the Contemporary, in response to the popularity of Captain Jack’s Oyster Bar at the Lake Buena Vista Village, the Coconino Cove opened on the south end of the Grand Canyon Concourse serving oysters and drinks. An act named Amos and Charles played for the guests.

The Electrical Water Pageant also saw an upgrade. The Sea Serpent expanded to 4 floats, the sea lions and the shrimp were removed, and an octopus, dinosaur, and sea monster were added. River Country went through a nearly two-month refurbishment this year, a procedure that would become standard for Walt Disney World water parks in the years that followed.

Speaking of the Lake Buena Vista Village, a legendary addition, the Empress Lilly, opened on May 1, christened by its namesake Lillian Disney. The stationary paddlewheeler featured three full restaurants and three lounges as well. The Steerman’s Quarters was a steakhouse, the Fisherman’s Deck was a seafood restaurant and the Empress Room was formal dining. The main lounge was the Baton Rouge Lounge and was a showcase for jazz bands, such as the Baton Rouge Music Company and the Riverboat Rascals. The Promenade and Starboard Lounges faced out over Lake Buena Vista.

EPCOT development continued under what is known as Master Plan 5. This plan itself is similar to what would eventually be created. The entrance was now through Future World, with a figure eight World Showcase in the back positioned around a double lagoon. The American Adventure was situated as a bridging area between the two lands, not at the far back of World Showcase.

Future World itself was very close to its final design, even if the pavilions themselves would still change drastically. Spaceship Earth was still the entrance and the rest of the pavilions were surrounding Communicore. On the left side and moving clockwise were Life and Health, The Land and Transportation. On the right were Space, The Seas, and Energy.

Spaceship Earth and Communicore were similar in concept to their final, opening day versions. The Seas had multiple experiences: a history of maritime travel, an underwater tour hosted by Neptune, and Sea Base Alpha. Transportation had an outdoor track and some form of indoor simulators. Life and Health was designed as multiple experiences that seemed to be centered around a midway. Energy was more forward thinking than focusing on fossil fuels. The released plans for Space and The Land were extremely vague at this point.

Despite its figure eight design, World Showcase was very similar in concept to the 1982 version. American Adventure itself was a similar show to what we know today. The countries that were signed or in negotiations were “Canada, Costa Rica, England, Israel, Japan, Mexico, Morocco, Poland, Saudia Arabia, South Korea, United Arab Emirates, Venezuela, West Germany” and others. The International Program staffing concept was also being planned.

It’s easy to dismiss 1977 as an uneventful year. The only attraction change was a parade that had existed for years in Disneyland. However, that would be underestimating the impact the Electrical Parade, and even the Empress Lilly had on the culture of Walt Disney World. Both would be staple experiences into the 1990s. These changes, along with the development at the resorts and for EPCOT, were stepping stones to the mature resort we are all familiar with.

Previous
PHOTOS, VIDEO: “Merry and Bright Nights” Premieres at Living with the Land in EPCOT