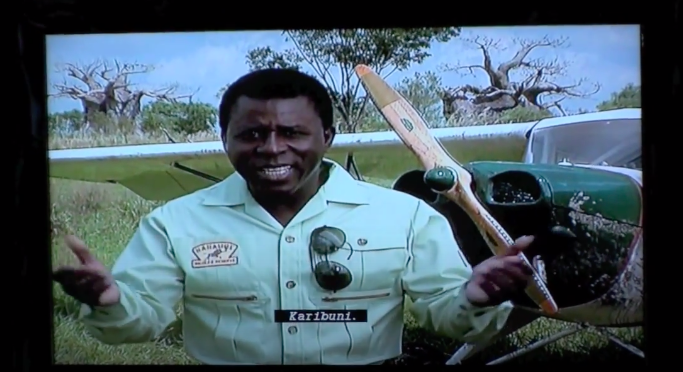 One of the last remnants of Kilimanjaro Safaris’ old anti-poaching storyline has been removed from the attraction at Disney’s Animal Kingdom—and with it, a beloved character from a longtime pre-show video at Walt Disney World.

Many Walt Disney World fans will know that Kilimanjaro Safaris at Disney’s Animal Kingdom used to have a scripted section. After looking at the animals on the Harambe Wildlife Preserve, guests would end up on a slow-speed chase to save Big Red and Little Red, two elephants kidnapped by poachers. Over the years, this storyline was progressively toned down until it was removed (almost) entirely in 2012. The only remnant of the storyline was a video that still played in the queue. It featured Warden Wilson Mutua educating guests about the dangers of poaching. Mutua was played by Abdoulaya N’Gom, who’s appeared in a number of movie and film roles over the years, including George of the Jungle. While N’Gom holds a Master of Arts degree in Italian from UCLA, he is Senegalese, and had to learn how to pronounce Swahili words as well as adapt an East African accent for his role as the warden.

As of today, the anti-poaching video is gone, and only an updated safety video plays. This update has been part of an initiative in recent years to make sure guests know how to load ride vehicles by the time they reach the platform. Similar safety spiel videos have been added or retrofitted at attractions such as Seven Dwarfs Mine Train, Rock ‘n’ Roller Coaster, and Space Mountain. You can view segments of the new video below:

The old video (as well as the original attraction) featured some potentially distressing moments with dead animals and guns, which may have been a contributing factor in its removal after 22 years. You can see the old anti-poaching message at the beginning of our 2012 POV video of Kilimanjaro Safaris below.

We’ve been checking up on Kilimanjaro Safaris frequently while a new goat exhibit is constructed. Check out progress of the exhibit here.

VIDEO: New Audio Announcement at Universal Orlando Resort States Masks May Only Be Removed for Eating And Drinking While Stationary