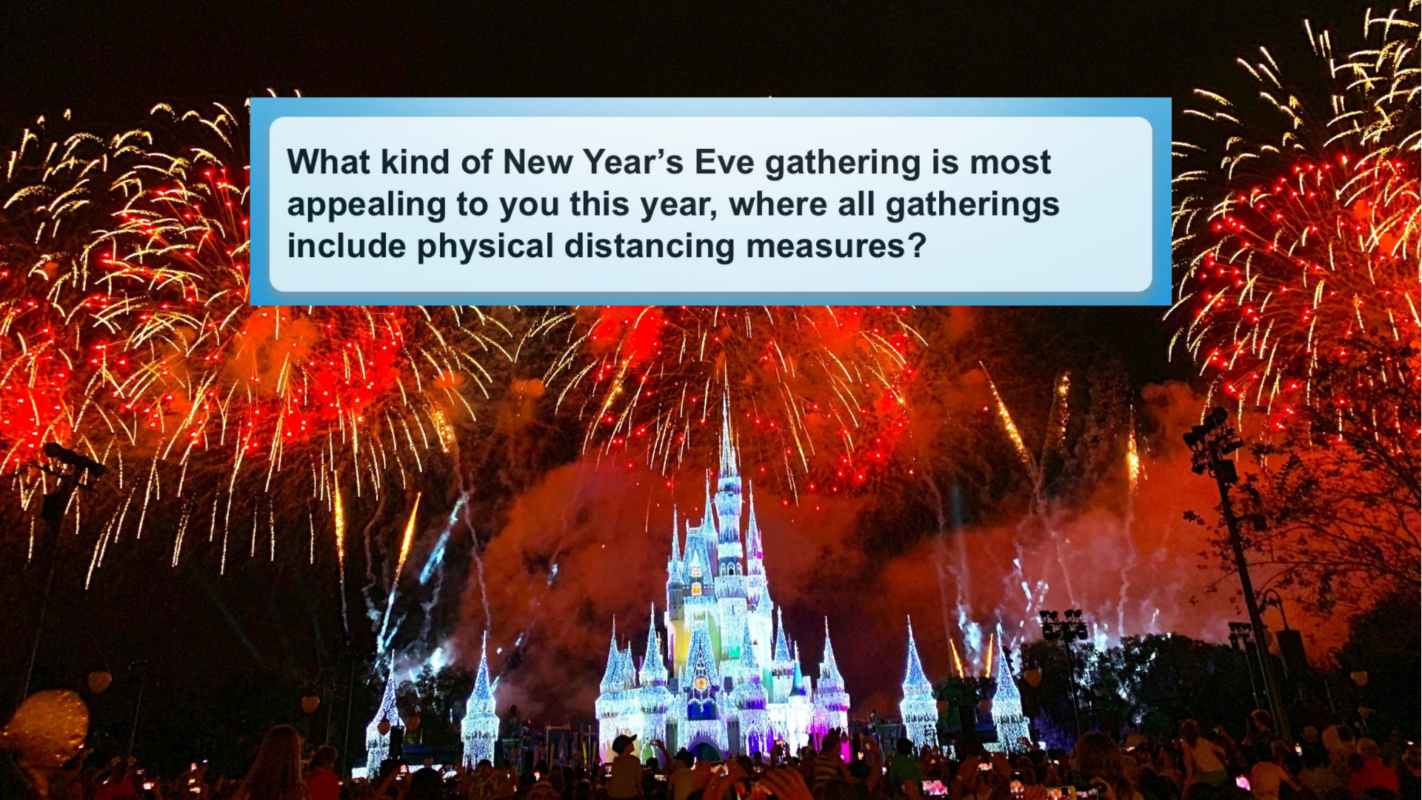 With New Year’s Eve just a hop, skip, and a turkey away, Walt Disney World has begun surveying guests who are staying on-site during the last week in December for their thoughts on New Year’s Eve celebrations and experiences across the parks, Disney Springs, and at the resorts. Do note that New Year’s Eve offerings have not yet been announced for Walt Disney World, and with Christmas holiday offerings specifically stated to end on December 30, it’s unknown whether there’ll be anything happening at all, due to new health and safety measures.

After getting through some initial basic questions, we reach the part of the survey on NYE. Disney asks guests what would make them interested in attending a New Year’s Eve celebration at a theme park, specifically.

Following up with that, they ask about the possibility of a celebration held at Disney Springs.

Considering what a troubled year it’s been, Disney is also testing the waters to see if people are looking for a lively celebration, or a more laid-back one.

While Walt Disney World is a family destination, many of its separately-ticketed events are geared towards adults. Here, Disney gauges whether guests want an all-ages event, or one for a more grown-up crowd.

The livestream celebration option seems particularly interesting (and probably the most reflective of the current times). Since the reopening of the Walt Disney World Resort hotels, a pre-recorded version of the “Happily Ever After” nighttime fireworks spectacular has become a channel on the resort TV lineup.

Hours have been released for the Walt Disney World theme parks through the start of the New Year, and given the year we’ve had so far, there are many looking forward to ringing in 2021. However, we’re still not in the clear of the ongoing COVID-19 pandemic, meaning every upcoming holiday will have to be slightly modified for the health and safety of everyone.

Typically, all four parks extend their hours on New Year’s Eve, sometimes as late as 2:00 AM on the night before to help spread out the crowds. Last year, we even had our first-ever New Year’s Eve countdown to midnight at Disney’s Animal Kingdom. However this year, not only are hours shorter than ever, but up until this survey, there has been no indication that any New Year’s festivities will be taking place at the parks.

Will you be headed to the parks for New Year’s Eve? Are you hopeful for any special event announcements, or looking forward to a quiet celebration? Let us know in the comments!