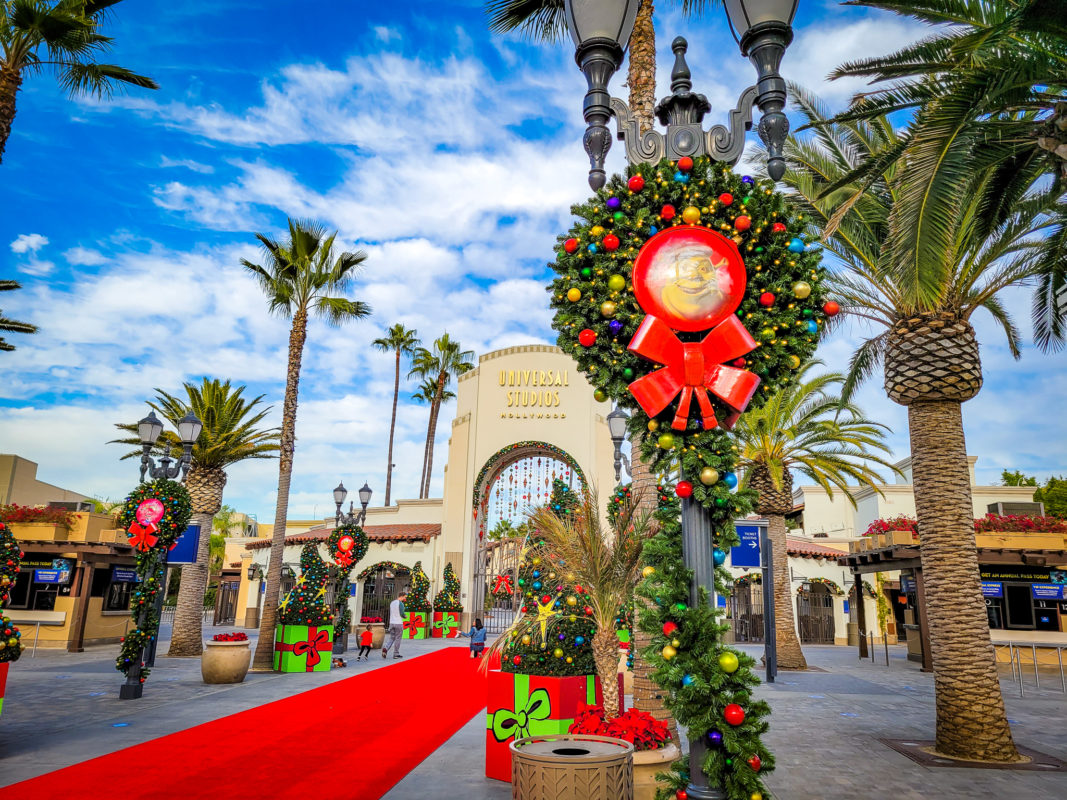 Things have been quiet at Universal CityWalk Hollywood ever since Sunday night’s health order shut down all dining on-site at any restaurants in Southern California. The shops and snack windows are still open, but most everything else is closed at least through December 20. But that doesn’t stop CityWalk and Universal Studios Hollywood from looking their festive best for the holiday season. Join us now as we take a CityWalk through the largely empty shopping and dining district.

The walkways are virtually empty, except for the occasional shopper or family taking photos with holiday decorations.

New signs have recently been added to the walkways pointing to the locations of restrooms to encourage frequent hand washing.

The lines of guests waiting to get into the Universal Studio Store have since gone away. All that’s left are empty queue gates standing at some of the more popular shops and restaurants.

Still open eateries include the new Wizarding World of Harry Potter Sweets & Treats booth, offering in-park favorites like Butterbeer, churros and chocolate frogs, and they now seem to be open on weekdays. Nothing feels like Christmas at Universal Studios Hollywood like a nice glass of warm Butterbeer, and so long as guests take their drink off-site to enjoy it, the quick-service window can remain open.

Sparky’s Mini-Donuts is also open, offering buckets of fried dough to be consumed off-site. And hopefully not all in one sitting.

Voodoo Doughnut remains open as well, though the line stands empty out front. The counter was available for walk-up traffic when we stopped by.

Restaurants like Buca di Beppo and Bubba Gump Shrimp Co. are still open for take out orders. Guests may come in to place their order in person.

All the other restaurants are closed.

Some of the smaller eateries like the Crepe Cafe have removed their outdoor seating to discourage loitering at the closed business.

Even other take-away windows like Cinnabon and Wetzel’s Pretzels are now closed. Dining in has never been a problem for Cinnabon as they are exclusively to go, but they are still shuttered for the time being. Cinnabon had reopened several weeks ago, long after the other shops and restaurants had come back. Hopefully they will just be late to the game and reopen soon, at least on the weekends.

Up at CityFood, the fast food stands are open except for the now permanently closed Subway and Panda Express. Pink’s Hot Dogs has also closed.

Oddly enough, however, Poke Bar has opened finally. On our many trips here over the summer, Poke Bar has been under construction and then closed for many months. It’s nice to see them get the doors open again, even if it’s at the hardest time.

All of the seating areas are gated off to traffic and a security guard is nearby to watch for anyone trying to sneak a dine-in lunch beyond the wall.

Along the upper walkway seating area, it has become a maze of fences as empty tables are shielded from would-be diners. All the chairs have been removed.

Despite the somber emptiness of CityWalk, the decorations are festive and bright for holiday shoppers. Santa Kong has donned his yuletide best with a Santa hat and the largest bunch of mistletoe in LA. But the mistletoe can only be honored for members of your same traveling party, please keep six feet of distance from others.

The gigantic tree at Five Towers stands out in front of the Universal Cinemas.

The whole area has become one large photo op for families to get that shot they’ve always wanted with no other guests intruding.

Universal rolled out the red carpet with a somewhat modified holiday display. They don’t skimp on the holly, or the jolly, but it’s not all of the same elements that are usually out front. With reduced traffic allowing less wear on the ground, the red carpet is a very nice touch.

Peeking inside the park, we see that no decorations have made their way onto the main drag of the park, which makes sense as guests can’t do anything but look inside for now.

The lamp posts feature wreaths that have Universal-adjacent characters on both sides. Wreaths featuring Shrek and Donkey, two Trolls, two Minions, Hello Kitty and Keropi, and Po the Kung Fu Panda and King Julian from Madagascar line the walkway. But the most appropriate one for this time of year is also the worst of the worst.

The Grinch and Max grace the sides of the wreaths closest to the main gate, and although there is no Grinchmas this year, it’s nice to see them represented here in some way. Calls to mind happier times from Christmases past.

That’s it from us here at Universal Studios Hollywood and CityWalk Hollywood. Will you be heading to CityWalk for some holiday shopping? Let us know in the comments below. And for more like this, take a look at an awesome new drink for the holidays at Universal Orlando Resort, and some cute new Wizarding World of Harry Potter Quidditch ornaments for your holiday tree, available at the Universal Orlando Resort and at the Universal Studio Store in CityWalk Hollywood.