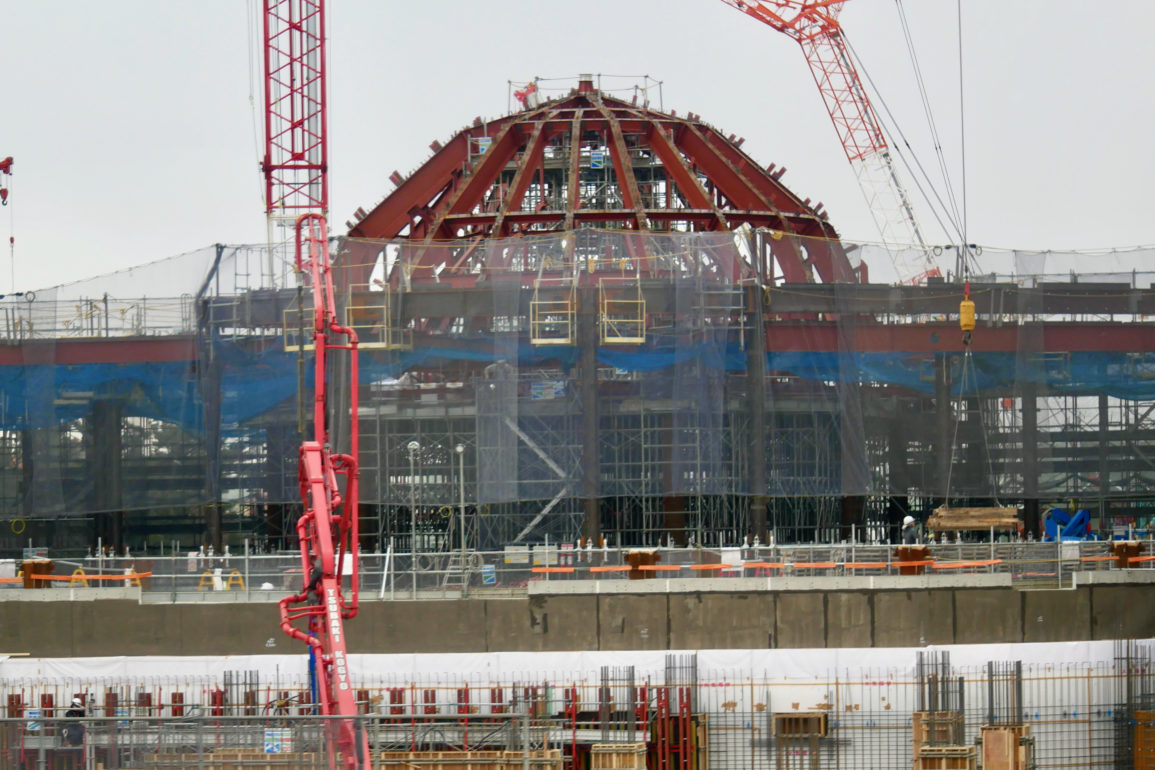 Amidst all the excitement surrounding both New Fantasyland at Tokyo Disneyland and Super Nintendo World at Universal Studios Japan, it’s sometimes easy to forget that Tokyo DisneySea also has a massive expansion on its way! That is, until you pass by the massive construction site again. So let’s check in on the latest happenings around the resort’s construction projects!

Repainting of the Tokyo Disneyland Hotel is progressing expeditiously, with the central section now completely repainted to the muted gold color once again. For a comparison, you can see the eastern section of the hotel in the far left with the now-faded original paint.

The mysterious backstage building behind Showbase at Tokyo Disneyland is almost complete, and it seems that the building’s scaffolding is starting to come down.

The choice was made to design the building to blend in with the World Bazaar-esque design language that the bus area follows.

Remaining areas are yet to be uncovered, but it would appear that the rest of the building’s parking lot-facing side will blend with the Victorian-era architectural style of the bus station.

In the largely-unused bus parking area, Cast Members have created a giant Mickey Mouse face out of parking cones!

The show building for the Frozen attraction is coming along nicely. We still haven’t seen any Arendelle-specific design elements yet, but the facade has continued to reach some semblance of completion.

The park-facing side of the hotel is coming along equally quickly. It’s hard to know exactly what the hotel’s layout will be, as we’ve only seen a single piece of concept art for the hotel itself.

A glimpse at the park-facing side reveals that there’s still quite a bit more work to do on what Guests will directly face, however.

The bypass tunnel for Fantasy Springs, presumably for buses leaving the Tokyo Disneyland parking lot, has been paved completely and looks largely done.

The Fantasy Springs Hotel has quickly added another couple of stories since our last visit. Details regarding the official capacity and height have yet to be released, but it seems this will be rather close to Hotel MiraCosta or even the Tokyo Disneyland Hotel in size!

A second section of hotel has also started construction, with foundations poured and columns in the ground. Also in the far left, you can see that a rotunda dome will be a part of the structure’s low-rise section!

This addition is very new to the project, but it’s likely this will be part of the lobby area for the upcoming luxury hotel.

The section of hotel closest to Tokyo DisneySea already clearly looks like partitions have been made for Guest rooms.

The lower section of the Peter Pan Attraction, presumably to be used as the queue area, is seeing more of its scaffolding come down, revealing the green painted-sides. There appear to be a large number of doors both for loading and for Cast Member entry.

Scaffolding is also down on the larger building, presumably the main show building for the exciting new attraction. Like the other newly-constructed buildings so far, the entire structure is covered in green paint.

Two massive doors on the attraction building’s backside are currently obscured by a blue tarp.

The Central Power Plant building adjacent to Peter Pan is also nearing completion, with ventilation covers on the side under installation and a lot of exterior scaffolding down.

Across the current backstage access road, a temporary building (presumably for construction workers and management) has been placed behind the Indiana Jones Adventure: Temple of the Crystal Skull building in a formerly empty plot.

Across the tracks in part of the Sheraton Grande Tokyo Bay Hotel’s parking lot, the staging area for a number of Fantasy Springs’ decorative elements have been covered in tarps to protect them through the winter.

And in the current Tokyo DisneySea parking lot, a Mickey Mouse silhouette cone creation has also been added to the park’s largely-unused bus parking area.

Construction on at least two of the Believe! Sea of Dreams barges appears to be complete. Judging by the looks of the visible one, these will play host to video screens that wrap around the entire middle of the structure, with railings on top for possible character appearances as well. The golden pirate ship in the far reaches of dry dock is also done.

Two more remain for completion in the park’s dry dock storage area. Additionally, the only seasonal event barges remaining in dry dock are those for Festival of Mystique, which could be a sign of retirement for Tip Top Easter and Pirates Summer Battle: Get Wet! ahead of Tokyo DisneySea’s 20th Anniversary celebration next year. Believe! Sea of Dreams is scheduled to premiere as Tokyo DisneySea’s nighttime spectacular in 2021.

What are your thoughts on the latest Fantasy Springs developments? Are you excited to visit when the expansion opens in 2023? Be sure to let us know in the comments below, or on social media!