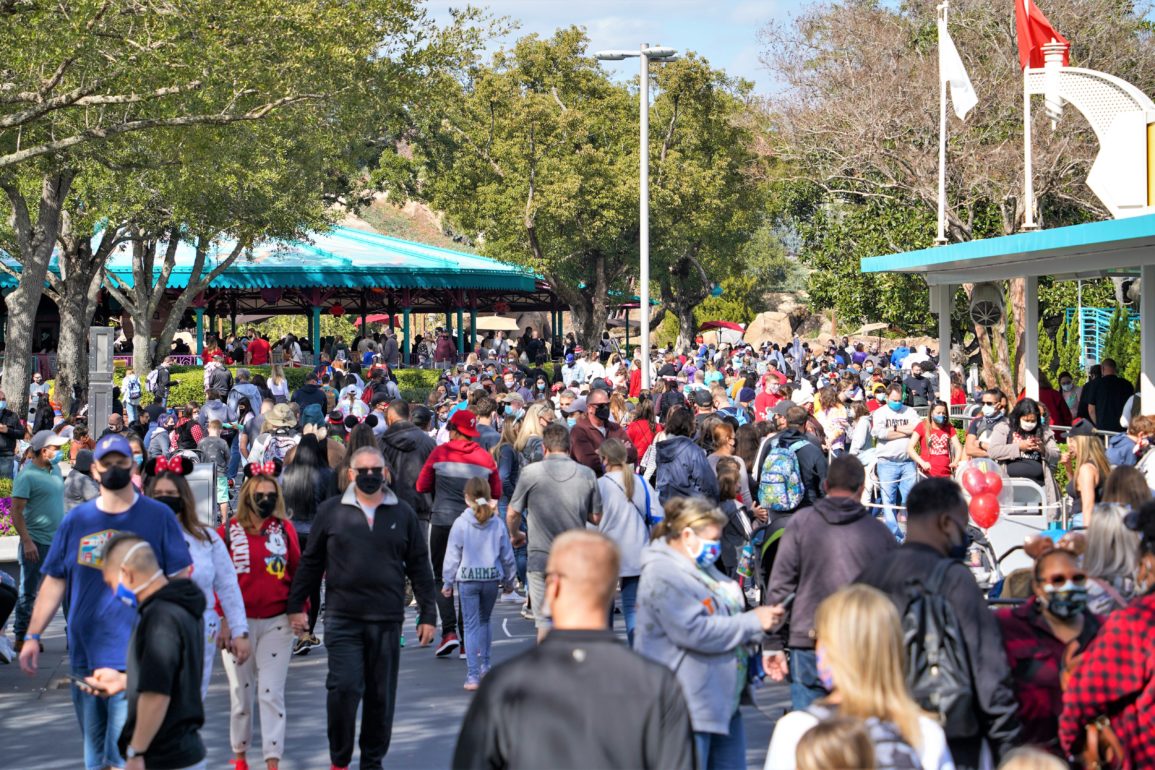 Welcome to the Magic Kingdom — seemingly The Most Crowded Place On Earth! Despite the holidays being behind us and the decorations being removed, Walt Disney World parks only seems to be getting busier, not to mention 12 hour Virtual Queue waits for Gideon’s Bakehouse at Disney Springs today. Busy days don’t scare us away, though, so let’s head to the park and see what’s going on.

The Dapper Dans were performing today, as they regularly do, though today the Dans were merely a trio instead of the usual quartet.

After enjoying a few tunes, we popped into Uptown Jewelers and noticed they had a stock of the elusive neon park icon Loungefly mini backpacks which have rarely been seen since their release back in September.

Heading up Main Street, we would catch our first of two sightings of the Mickey & Friends Cavalcade as it moved through the park.

Less than a week ago, we reported that the new Pirates of the Caribbean sail had been blank for nearly two months as it was being refurbished. Mere days later, the sign has finally had the title of the attraction added to the sail (along with some holes), our first signs of progress since November.

In Frontierland, the large-scale refurbishment continues for the Rivers of America and Tom Sawyer Island. Significant restorative work grinds on for Harper’s Mill while other projects take place on and around the island.

At Ye Olde Christmas Shoppe, eagle-eyed (or tall) guests might notice a familiar character hiding within the shop.

Moving over to Fantasyland, we start to get a clearer picture of the crowds. Stroller corrals seem just as packed as they were this time last year, and the number of guests in surrounding areas doesn’t feel a whole lot different, either.

At The Friar’s Nook, each line was at least a dozen guests deep as parkgoers tried to find food as the offerings have been reduced.

Under the Sea ~ Journey of the Little Mermaid saw its line extend almost all the way to Storybook Circus.

Inside Storybook Circus, The Barnstormer had waits approaching an hour in the afternoon. As is commonplace these days, the queue snaked through Fantasyland Station in an effort to find space for everyone in line.

Work continues around the platform of the aforementioned Fantasyland Station as new track continues to be laid as part of the years long refurbishment of the Walt Disney World Railroad.

Moving on to Tomorrowland, we were given a pretty clear visual of the rising crowd levels within the park. The amount of guests is a far cry from the days of even the 35% capacity level that the parks operated at in mid-November, only two months ago.

Contributing to this flood of people are queues, such as the only for Tomorrowland Speedway, that can do nothing but spill out into walkways when they become longer than what Disney plans for.

Hopefully new attractions will help absorb guests and keep wait times and crowds manageable. Despite the exterior work that TRON Lightcycle Run has been undergoing, though, it will be at least a year until it opens.

Finally, on our way out of the park, we caught our second showing of the Mickey & Friends Cavalcade on Main Street as the sun was beginning to set for the day.

Thanks for following along with us on this busy day at the Magic Kingdom! For all of the latest updates on Disney news, construction, crowds, and more, click here and follow @WDWNT on Twitter!

Refurbishment of Expedition Everest at Disney's Animal Kingdom Extended Through April 30February 21, 2022
Signage Covered Up at Theater in the Wild as 'Finding Nemo: The Big Blue… and Beyond!' Prepares to O...May 28, 2022
Club runDisney 2022-2023 Registration Open, Platinum Level Sold OutMay 3, 2022