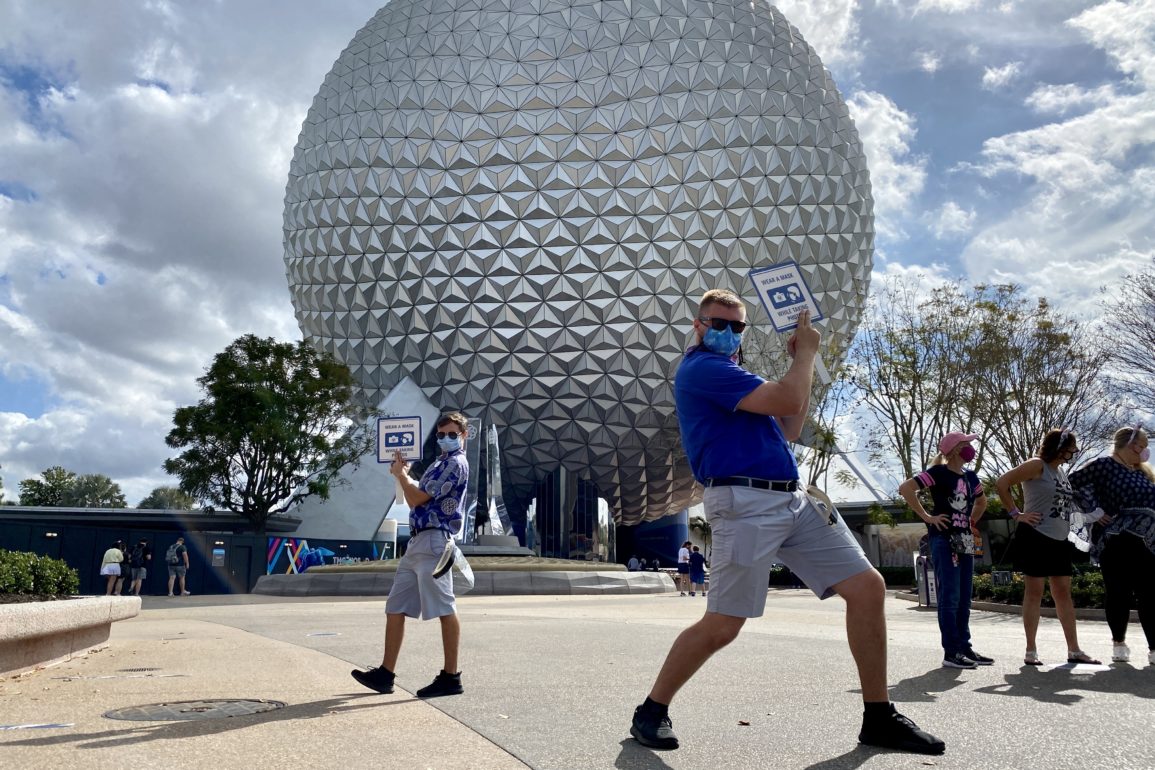 Hello from an absolutely gorgeous day at Walt Disney World! We took advantage of the beautiful weather to check out all the new things at the Magic Kingdom and EPCOT today. Let’s get started!

With yesterday being the final day of the Sorcerers of the Magic Kingdom game, today we found the Firehouse closed, and all the signage pertaining to the game removed. For more pictures and information, check out our article here.

The Hall of Presidents was still closed today as it prepares to welcome the new President.

The Rivers of America continues to fill with water, although it seems to be nearing completion.

The Tomorrowland Transit Authority PeopleMover was still closed today for refurbishment, and while they were testing the ride today, we did see vehicles crash into one another, so perhaps they’re not quite ready to open yet. For pictures and video, check out our article here.

Construction on the illuminated canopy at TRON Lightcycle / Run is moving along quite quickly. The stretch of canopy leading to the show building has been growing daily, it seems.

Concrete work continues in Frontierland, with this large cover having been shifted slightly to protect a new fresh patch of concrete.

After a several-day absence, the Tinker Bell & the Lost Treasure Cavalcade has returned to the Magic Kingdom. Tinker Bell was forced to take some time off after her float suffered a malfunction last week, but she’s back now, and ready to spread some pixie dust!

We found several new open edition Princess pins today, including this one of our favorite princess, Rapunzel. To view the full collection, check out our article here.

We stopped in at Tomorrowland Light & Power Co and found a whole slew of new things in the MaDe kiosk while we were there. First, we found that the MagicBands and the Phone Cases have gotten “Limited Release” categories, which currently contain the Valentine’s Day designs.

Then we found a complete set of MagicBand, Phone Case and Magnet featuring Marie from “The Aristocats”.

Next, we found these coordinating Valentine’s Day phone cases. We love how they complete each other when held together!

In addition to the Marvel Valentine’s Day designs we found a little while ago, there are now designs featuring everyone’s favorite power couple, Mickey and Minnie. The MagicBands start at $24.99.

In addition to the two coordinating cases, we also found this “Perfect Pair” case. Phone cases start at $29.99.

We found one matching magnet for the Mickey and Minnie Valentine’s Day items, which starts at $14.99.

Our favorite merchandise find was a bit of a surprise. We found the first installment of the Limited Release “Stitch Crashes Disney” Series at Star Traders. For more pictures and information on the full collection, check out our article here.

We found a new Magic Kingdom Guide Map, with previously unavailable dining locations added back in and Sorcerers of the Magic Kingdom, along with some entertainment and shopping locations that might surprise you, taken out. For more pictures and information, check out our article here.

We had an excellent time at the Magic Kingdom, but with so many construction projects at EPCOT, we can’t stay away for long.

We found men in lifts working in the ceiling of the Innoventions East building.

More work has been completed on this dividing wall, with framing having been added recently.

We also found this structure newly covered and taking shape further down in the Innoventions East building.

Innoventions West demolitions continues, with the facade of the building now completely gone.

The play equipment is being disassembled in the play area next to the Traveler’s Cafe. We’ll be sure to keep an eye on this area as things develop further.

We spotted a new hidden gem in the France Pavilion expansion today. We have to admit, we’ve felt there was something special about this beautiful scrollwork from the moment we saw it, but we just couldn’t figure it out until today. Do you see it? Let us know in the comments! (Hint: follow the spiral up to the head.)

While we were in the France Pavilion expansion, a Cast Member brought out this celebrity came for a surprise photo opportunity. He was gone after just a few moments, but we were lucky enough to grab this cute picture.

Progress on the Italy Pavilion La Gelateria booth seems to have slowed down, as there isn’t any visible change here from last week.

We checked in on Donald’s status at the Gran Fiesta Tour, and even after a staggering 20 days missing, we still found the final scene to be a two-man show. We’re beginning to wonder if he’ll ever return, or if we’ll be forever asking the question, “donde esta Donald?”

We found one notable piece of merchandise at EPCOT by way of this new unisex shirt featuring the “Partners” statue and Cinderella Castle. For more pictures and information, check out our article here.

On our way out, we came across some lively Guest Experience Team and Front Gate Cast Members who were ready to make guests laugh with their antics, all while reminding them to keep their masks on while taking pictures. We love their style!

We had a great day at Walt Disney World, and we hope you enjoyed coming along with us. Have a magical day!